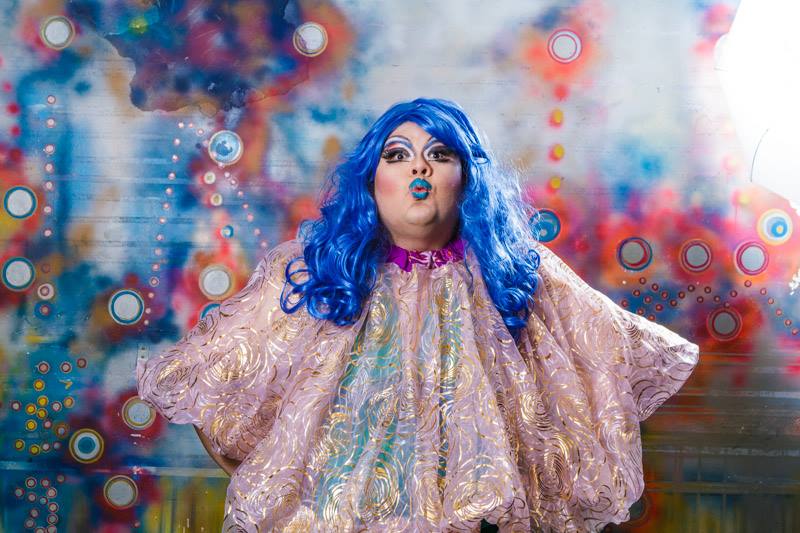 Meet 38-year old Singaporean Eugene Tan… who also happens to be the man behind one of Singapore’s most prolific drag queens; Becca D’Bus.

Fierce, flamboyant and colourful, Becca D’Bus needs little introduction. A renowned name within the local drag circuit, Becca D’Bus has been featured in numerous media publications. And when one considers her loud outfits and her even louder personality, it’s not hard to see why this larger than life figure is able to command so much media attention.

But Becca D’Bus is not the focus of my attention today. No, the person I’m interested in is the man behind the heavy make up, the colourful wigs, and the outrageous outfits. Becca D’Bus has hogged the media spotlight long enough. Today, it’s time for Eugene to take centre stage instead.

Eugene is just as sassy as his drag persona, and he certainly wasn’t afraid to show it. His answers were chock full of wit, and I’ve never laughed harder at a person’s coming out story than I have at his. And considering the number of people who have already been featured on the Out Of The Closet series, that says a lot.

For example, when I asked him whether there were any extra personal details he wanted to share with me, he told me:

I have a rash

And when I asked him how old he was when he realised that he was gay, he had this to say:

I was in the drama club in ACS. Not much more needed to be said at the time.

I’ve had times when I’ve thought I might swing more than one way, some of those were pretty serious questions.

And that pretty much set the tone for the rest of the interview. Eugene doesn’t take himself too seriously. And he doesn’t have a sob story to share. But he does have a lot to say, and he certainly isn’t afraid of saying it.

Born to a typically middle class family, his mum is a recently retired school teacher while his dad is a businessman. Growing up, Eugene didn’t have to struggle much with society despite the fact that he was never much of a gender conformist. Whatever struggle that he did face was not a result of his queerness, but due to to other factors like his weight etc.

In a weird way, I have always found spaces that we think of as masculine, like all boys’ schools and the army, to be accommodating of gay men… Those spaces seem to always have just understood that I’m just different, and if I’ve had trouble, it’s been about not having my shit together, more than being gay, queer, or effeminate, or whatever.

I’m also hella tall and if I fell on you, you might die, so I recognise that maybe many people would think hard before attempting violence.

The ease with which he grew into adulthood wasn’t normal though. Especially for someone who grew up during the 1980s.

Many of his fellow gay friends during his ACS days were bullied. And upon reflection, he concedes that his unique situation might be because he was too self-absorbed to notice anyone who might or might not have been bullying him.

I was extremely self-absorbed, and just maybe didn’t notice being bullied. It’s entirely possible that it happened and I was too busy thinking about myself to notice. 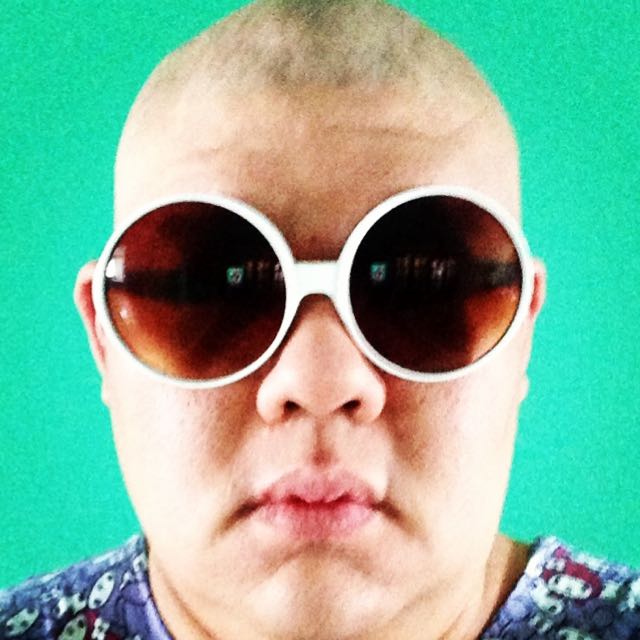 While he doesn’t remember having to endure anti-gay bullying during his schooling days, he did still encounter homophobic behaviour. And it was from a teacher no less.

The teacher in question was a woman named Miss Caroline Wong. And to make matters worse, her homophobic outburst was incredibly random because she never taught Eugene directly.

On a seemingly mundane morning, Eugene sat next to Miss Wong in the canteen. Miss Wong, for whatever reason, felt the need to tell him that ‘I don’t like sitting next to homosexuals‘.

The homophobic insult took Eugene by surprise, but he still managed to muster enough sass to look her up and down and retort with ‘Neither do I’ before shifting his seat.

In the scheme of things, as a comeback, it’s 100% fail, but whatever, it allowed me to leave the situation with what I thought of as intact dignity.

Many years later, while visiting ACS on Founders Day, he ran into the homophobic teacher by chance again and confronted her in front of all of her colleagues.

I told her she was very lucky that I was never a suicidal child, and in front of her friends, people who were still teaching at ACS, I recounted our exchange.

In fairness she denied it happening.

In fairness too, she had a very vested interest in amnesia.

In 2001, Eugene moved to Boston to pursue a Bachelor’s Degree in Marketing Communications and Theatre Studies at Emerson College. He thought he was going to be a copywriter.

But upon graduation in 2004, he joined The Theater Offensive instead; a Boston-based theatre company where his activist impulses were nurtured. It was during his time there that Becca D’Bus was born. She is, in fact, named for an expression that connotes unequal treatment.

Within a few years,  Becca D’Bus started to get noticed in Boston. She got to have her own show in Boston, while performing with other like-minded drag queens, and also, through various opportunities, got to perform New York, Philadelphia, Iowa and in Virginia as well. In 2010, Eugene returned to Singapore, where he dabbled in PR, marketing and editorial work. But those stints didn’t last very long…

By 2013, Eugene made a more serious attempt to be noticed on the local drag scene, he took part in Drag Academy, an amatuer contest at PLAY; a then popular, though now defunct gay club.

On Valentine’s Day in 2015, he founded RIOT!; a drag revue that comes alive on the second Saturday of each month. Fierce, filthy and funny, RIOT! features outrageous outfits, potty-mouthed jokes and musical numbers, RIOT! has been thrilling audiences since its premier and after a short timeout for being a bad girl, it returns on April 9, bigger than ever. Still going strong..

Currently in the midst of preparation for that show, Eugene Tan has very kindly taken time out of his busy schedule to share with us his coming out story.

Well, I think most people know before I needed to say… and I was a very very late bloomer, so in a sense, as a young person, people knew as much as they needed for a long time. That I’m different, that I’m not precisely masculine, that I’m probably not getting married anytime soon.

I don’t really remember a first coming out experience, to be honest.

Err.. My mother doesn’t want me to get glitter on the floor. I am so oppressed. I kid. I’ve never asked. They seem to be coping more than fine. they talk about my performing career with their friends, they’ve watched my show(s), I’m very lucky, they are good people.

My extended family, I can’t speak to how they are coping but I must imagine that there is some dissonance. I am a gay man, and a drag queen, but I do also care deeply about where this country is at with issues surrounding queerness. So yes, I do call out the capitalist behaviours of magicians who run churches as businesses. And I have members of my extended family who attend and through tithing, support such bullshit. I don’t have much to say to those family members.

I have made it known to them that they continue to actively support campaigns to jail me for much the same things they do to have children. I don’t know how they live with themselves. I don’t ask. Frankly, I don’t really care.

3. What were some of the difficulties that you faced in pursuing a career as a drag queen?

I don’t want to pretend that everything in this business is easy. But I can’t imagine it’s far different than anything else in entertainment. Basically, there is just no roadmap for how to do it.  Which is hard. But then again, I guess if I was interested in following some kind of roadmap for life I wouldn’t be a performer.

4. Has being a drag queen ever posed any challenges to your personal or professional life?

Right now, being a drag queen is my professional life, so I guess it’s lovely that they are aligned? If anything, I think being a drag performer means I get to proclaim this fact in various social settings.

5. What’s the biggest sense of achievement that you get from doing drag shows? Any plans to ever retire from it?

Lord knows there are days when getting out of bed feels like a huge achievement in and of itself. My standards are very low.

When I decided to start doing this full time in Singapore, I said I have to do this now because one day, my face will collapse and it will be impossible to continue. So yes, of course I will stop doing it at some point.

Although the thought of dropping dead in the middle of a show is quite glamorous.

6. What advice do you have for aspiring drag queens?

I think one of the toughest things about being a young drag queen anywhere is that there just are not a lot of spaces to be seen, and even fewer platforms to perform at. And because of that scarcity, there can be a lot of pressure to conform to the styles or approaches of some of the more established queens on the scene.

Maybe within this environment, I would say to a new performer to try to stay in touch with what attracted them to the form to begin with. Some people in drag say “feel your fantasy” and I would agree, as long as your fantasy gives consent, of course.

7. What do you think is the biggest misconception that straight people have about drag queens?

8. Why should straight people attend your upcoming show on the 9th of April?

Anybody should come to RIOT! on April 9th because it is, first and foremost, fun. There are 5 performers in the show, me, Mona Kee Kee, Gina Gemini, the legendary Noris and a drag king, Papa Cherry, together, we represent a real diversity of talent and approaches.

It’s one of the few spaces in Singapore where you will see drag performers doing exactly what they’ve always wanted. And in the end, I believe that being around people who are expressing freely is liberating.

So come for a good time, to feel free, and to find the meaning of life. And juiciness.

Once again, Dear Straight People would like to thank Eugene Tan for sharing his story with us.