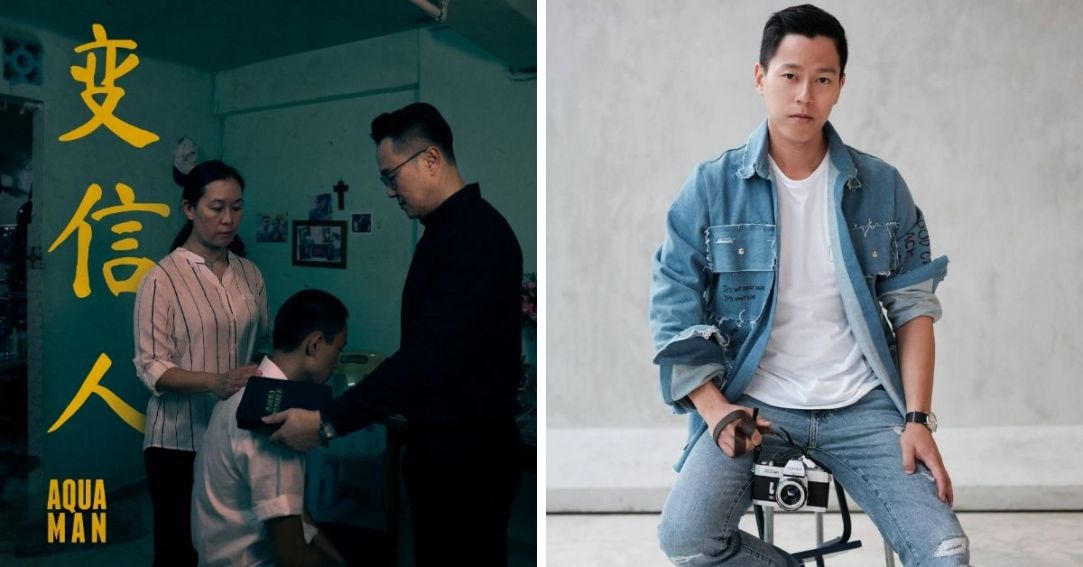 It was only after I made a gay film called AQUA MAN 变信人 that I realised just how difficult it was to produce LGBT content in Singapore due to media censorship laws.

It’s no secret that media censorship is rife in Singapore when it comes to the LGBTQ+ community.

While Netflix seems to have at least one token queer character in every show, LGBT+ representation in Singapore’s mainstream media is pretty much non-existent. In the rare instance when a character on prime time TV is gay, they make him a gay paedophile riddled with STDs.

My name is Jet Ho and I’m a professional filmmaker from Singapore.

Over the years, I’ve observed how LGBT+ centric films are increasingly making their mark on the world stage. From being showcased at prestigious film festivals to sweeping awards at the Academy Awards and the Golden Horse Awards, there is a growing market for LGBT+ content.

But Singapore’s media landscape is still plagued by archaic censorship laws. Despite the odds, the dreamer in me still decided to make my first ever passion project a gay film.

As a filmmaker, I believe that I have a social responsibility to spread awareness and educate the public about the LGBT+ community. I also hope to one day, see my work compete with the best of the best up on the world stage.

The result of that dream is AQUA MAN 变信人, a 5-minute long short film written and directed by me.

One of the most controversial issues within Singapore’s LGBT+ community has been the topic of conversion therapy.

As a country that prides itself on its multiculturalism, Singapore has always been fiercely protective of religious rights. But when sexuality doesn’t conform with religious teachings, the result can be traumatic for everyone involved.

As a filmmaker, I’m drawn to sensitive and suppressed issues. That is why I decided to base my first passion project on the topic of conversion therapy in Singapore.

Producing ‘Aquaman’ is one of the most challenging projects I have ever embarked on. Not only did I have to deal with the many complicated emotions associated with such a challenging subject, I had to be tactful so as not to offend anyone in the process.

I had to do a lot of research with religious institutions in order to ensure that what my film portrayed on screen was not far from reality. This meant conducting research with religious institutions on how to accurately portray a “gay praying away” scene. I also had to get inside the head of a staunch Christian mother, and do it in a sensitive way that doesn’t unnecessarily demonise her.

I also had to deal with queries over my motives. When you’re producing LGBT+ content, people will quiz you over your intentions. They will ask if it’s suitable for children to watch. They will imply that we are being too influenced by Western culture.

The biggest challenge however, was in promoting the film.

As a professional filmmaker, I am well aware of the media censorship laws. But it didn’t quite hit me just how difficult it would be until I started promoting my film.

Every local film festival and streaming media outlet refused to respond to any of my emails. In the instance that I do get a rejection letter, reasons cited were vague. Friends working within the government sector or civil service were also afraid to share the film, fearing that it might jeopardise their career.

In the end, YouTube became the only outlet where I could showcase the film.

Despite the setbacks, I still want as many people to see my film as possible. AQUA MAN 变信人 is a short film set in the early 2000s that follows the emotional transformation of a gay teenager, Junjie, who is faced with the religious dilmma that many other gay Christians in Singapore face.

Personally funded by me, I made this film with the hope that AQUA MAN 变信人 would shed more light and empathy on the plight of LGBT+ children from religious families.

I hope that the overall takeaway from my film is that LGBT+ people are not manufactured, influenced or taught into becoming who they are. Who they are is simply a matter of truth.

Do give my film a stream or two and let me know what you think!

2 comments on “I Made A Gay Film About Conversion Therapy Despite Singapore’s Censorship Laws. Here’s How It Went”

Leave a Reply to The Mind Report Cancel reply