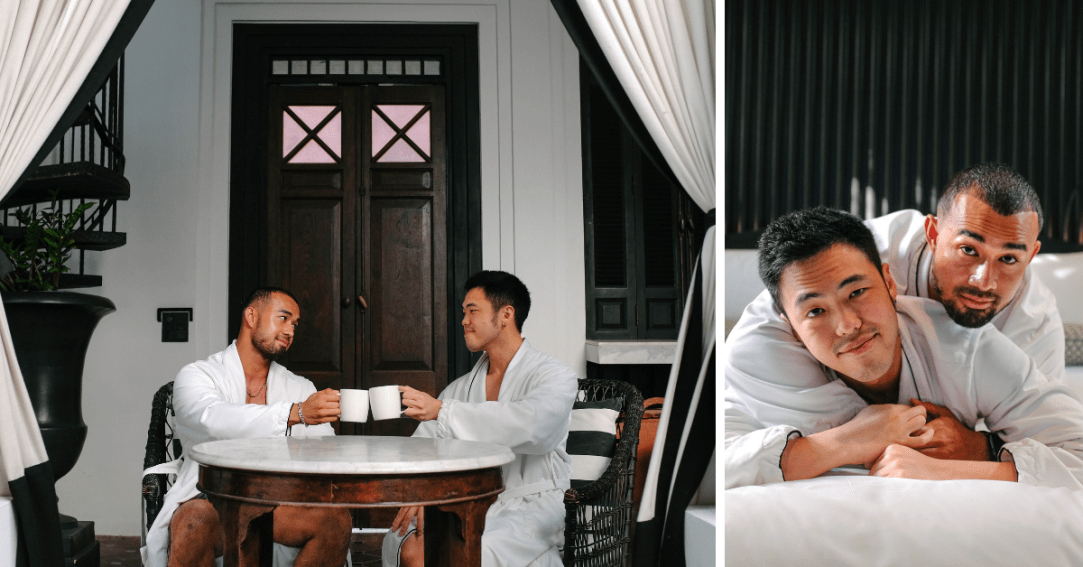 Find out more about the Pride Campaign from The Siam Hotel featuring the leads of ‘Getaway’, Sean Foo and Paween Snooker Nalieng.

1 June marks the start of Pride Month, the month-long global event that commemorates and celebrates the LGBTQ+ community.

While brands all over the world are busy slapping a rainbow filter on their logos, The Siam hotel has gone one step further by being the main sponsor of ‘Getaway’, Singapore’s first gay BL (Boys Love) web drama series.

As the main sponsor of ‘Getaway’, The Siam was instrumental in making Singapore’s first gay BL web drama series a reality.

The Siam is proud to support this project created by Dear Straight People.

While The Siam has always had a strong history of support for the LGBTQ+ community; we believe supporting this gay drama in terms of sponsorship and primary film location is a fun and unique way to showcase The Siam as an iconic luxury riverside hotel in Bangkok and open our exclusive hideaway to even more LGBTQ+ guests from around South East Asia.’

Comprising 5 episodes, ‘Getaway’ centers on the adventures of a Singaporean protagonist called Sam, who flees to Bangkok after his coming out to his conservative father goes horribly wrong. In Bangkok, Sam searches for his exiled gay uncle for guidance. But his search leads him to Top instead, where a whirlwind romance soon ensues between the two.

Created by Dear Straight People founder Sean Foo, ‘Getaway’ sets itself apart from other BL dramas by featuring an openly gay director (Ark Saroj) alongside an openly queer cast from Singapore and Thailand.

Of course, it would be a shame to only showcase the Riverside Pool Villa considering the fact that The Siam is set on 3 acres of verdant frontage along the city side of the Chao Phraya river.

The Siam will also be offering an exclusive deal for fans of ‘Getaway’.

Use the exclusive code GETAWAYTHESIAM to enjoy a complimentary double upgrade when you reserve a two-night stay at one of The Siam’s signature suites.

• Daily breakfast for two at restaurant

• A welcome cocktail for two once per stay

• Shuttle boat between the hotel and Bangkok’s central Sathorn pier

Experience The Siam For Yourself Here

This post was brought to you by The Siam