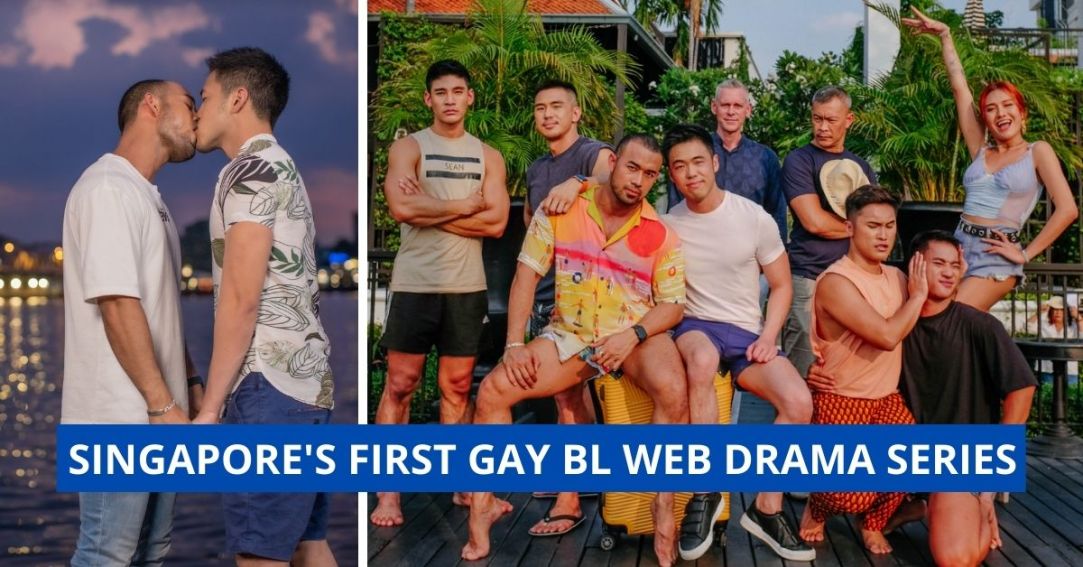 I Made Singapore’s First Gay BL Web Drama Series. Here’s How I Did It.

It all started at a New Year Eve’s party.

My intoxicated mind tends to wander to the most random of places. In the midst of an unrelated conversation, I randomly asked Snooker, an alumni of the hit gay drama series ‘Gay Ok Bangkok’, if he misses acting. He smiled and nodded.

In the spur-of-the-moment, I followed up with ‘Do you want to act in my drama?’

Snooker shot me an incredulous look and replied, ‘Act in what?’

I didn’t actually have a script at that point in time. But that was the night which solidified my desire to produce Singapore’s first gay BL web drama series.

BL, short for Boys Love, has become an umbrella term for any Asian drama centering on a gay love story.

In many parts of Asia where LGBTQ+ rights are lacking, BL dramas have emerged as the primary form of gay media representation.

In 2020 alone, Thailand and Taiwan produced over 80 gay BL dramas. That same year, South Korea jumped on the bandwagon by producing its first gay BL drama series, which was subsequently picked up by Netflix.

In fact, one of the most popular gay BL dramas of all time actually came from China; Addicted aka 上瘾.

Singapore unfortunately, still does not have a gay BL drama series to call our own. In Singapore, consensual sex between men is still criminalised and positive LGBT+ media representation is banned on mainstream media.

Since starting Dear Straight People in 2015, I’ve told numerous stories from the LGBTQ+ community in the form of articles and documentaries. As impactful as they have been, they don’t tug at the heartstrings in the same way that a gay BL drama series does.

Producing a gay drama series has been on my bucket list for the longest time. But it was only in 2022 that the stars finally aligned for me to make this goal a reality.

Not long after my conversation with Snooker, I got covid.

Forced into isolation for 10 days with no distractions proved to be a blessing in disguise. It gave me the time I needed to finally come up with a script.

As luck would have it, I became acquainted with James Thoo around the same time.

Before his return to Singapore to start a family, James worked as a screenwriter in Hollywood. In 2015, his script for Sonata won first place in Scriptshadow’s annual list of the best unproduced screenplays in Hollywood.

James had just set up a screenwriting academy called The Writers’ Room Singapore, which aims to help aspiring screenwriters like myself.

As extensive as James’ portfolio was, he had never worked on a gay drama before. Intrigued by my proposition, James agreed to serve as a script consultant. Over the next month, James gave me a crash course in script-writing.

Having a Hollywood screenwriter as a mentor was a once-in-a-lifetime opportunity. I knew that I was never going to get another chance like this. The backbone of any scripted drama is the script. And I finally had a script that I was confident enough to produce.

It was now or never. The next step would be to figure out where to get the funding required to make this script come to life.

Scripted productions are a costly affair. So I knew I had an uphill task ahead of me.

Over the next couple of weeks, I embarked on an aggressive fundraising campaign. It’s not easy getting corporations to part with money. I had to squeeze every connection I had. Eventually, my efforts paid off and I got just enough funding to proceed with the project.

Coming on board as the main sponsor was The Siam, a 5-star private 39-room urban luxury resort located in Bangkok’s Royal Dusit district.

The Siam was under the helm of General Manager Nick Downing, whom I had coincidentally told about my desire to make a gay drama series over a casual lunch one year ago. Neither of us could have predicted that we would be working together on a gay BL drama series one year later.

Another organisation that I managed to get on board as a supporting partner was Gayhealth.sg, a programme within AFA (Action For AIDs) that provides sexual health-related services to the gay and MSM community in Singapore.

Gayhealth.sg was actually the organisation that produced ‘People Like Us’, Singapore’s first gay web drama series. Having Gayhealth.sg on board as a partner meant a great deal personally, as it served as an endorsement of what Dear Straight People was trying to accomplish with our own production.

Joining the cause were 2Eros, Supawear, Ette Tea and FabulousMe, independent businesses that are all owned by gay entrepreneurs. These entrepreneurs all understood the important of gay media representation in Asia.

We also gained the support of Prolific Songs, a a music publishing and rights management company who had supportive LGBT+ people within the organisation.

With the fundraising process complete, I was now in a position to actually produce a gay BL drama series.

I knew from the start that I did not want to create a conventional BL drama.

As popular as gay BL dramas have become, they have also come under heavy criticism in recent years.

The loudest criticism against BL dramas is that they push a harmful gay stereotype. BL dramas typically contain homophobic undertones, and gay men are often portrayed as predators. Scenes of the gay protagonist taking advantage of his drunk or unconscious love interest have become commonplace within the genre.

In fact, half of my cast didn’t even know what a BL drama was until joining ‘GETAWAY’.

Despite growing criticism of the BL genre, there is no denying that BL works play an important role when it comes to LGBTQ+ media representation. It’s also heartening to see that BL dramas have come a long way in recent years.

No longer confined to a school yard setting, creators are increasingly pushing the envelope of what qualifies as a gay BL drama.

Another notable addition is ‘Until We Meet Again’, which features queer actors in queer roles, which is an unfortunate anomaly in the genre.

Similarly, ‘GETAWAY’ sets itself apart from other BL dramas by tailoring towards a gay audience.

Based on an original story from myself, ‘GETAWAY’ features an openly gay director alongside an openly queer cast from Singapore and Thailand.

The plot of this holiday-themed drama is as follows:

After his coming out to his conservative father goes horribly wrong, Sam jets off to Bangkok in search of his exiled gay uncle for guidance, who was similarly disowned for being gay many years ago.

During his search for his uncle, Sam meets Top, a hopeless Thai romantic who has been unlucky in love.

Together, they search for Sam’s uncle, but they end up finding something much more.

Fast forward to 2022 and almost every media outlet in Singapore produces coming out stories in some shape or form. Nobody bats an eyelid anymore when Dear Straight People churns out a coming out story.

I hope that this will one day be the case for LGBTQ+ dramas in Singapore.

‘GETAWAY’ may be Singapore’s first gay BL web drama series. But I hope it is not the last.

SHOUTOUT TO ALL OUR SPONSORS

‘Getaway’ would not have been possible without the support of all our wonderful sponsors, many of whom are from the LGBTQ+ community itself.

Do show your support for them and this might just encourage other companies to support future LGBT+ productions.

Use our exclusive code GETAWAYTHESIAM to enjoy a complimentary double upgrade when you reserve a two-night stay at one of The Siam’s signature suites. Find out more here.

2Eros is one of Australia’s top boutique men’s underwear & beachwear brands that empower men to live actively in style.

Ette Tea is a contemporary tea company specialising in tea blends with Singapore and South East Asian taste, with its main shop nestled in Singapore’s Chinatown.

Fabulous Me offers a wide range of products to get you ready for your next party, from party fans to cheeky outfits.

Gayhealth.sg is a programme within AFA (Action For AIDs) that provides sexual health-related services to the gay and MSM community in Singapore.

Prolific Songs is a music publishing and rights management company that have amassed over 1 million sales units, with 13 number ones and 15 top ten hits.

The Writers’ Room is a screenwriting academy founded by award-winning screenwriter James Thoo in 2022. Enrol before 13 June to get $72 off James’ Mentorship Programme.