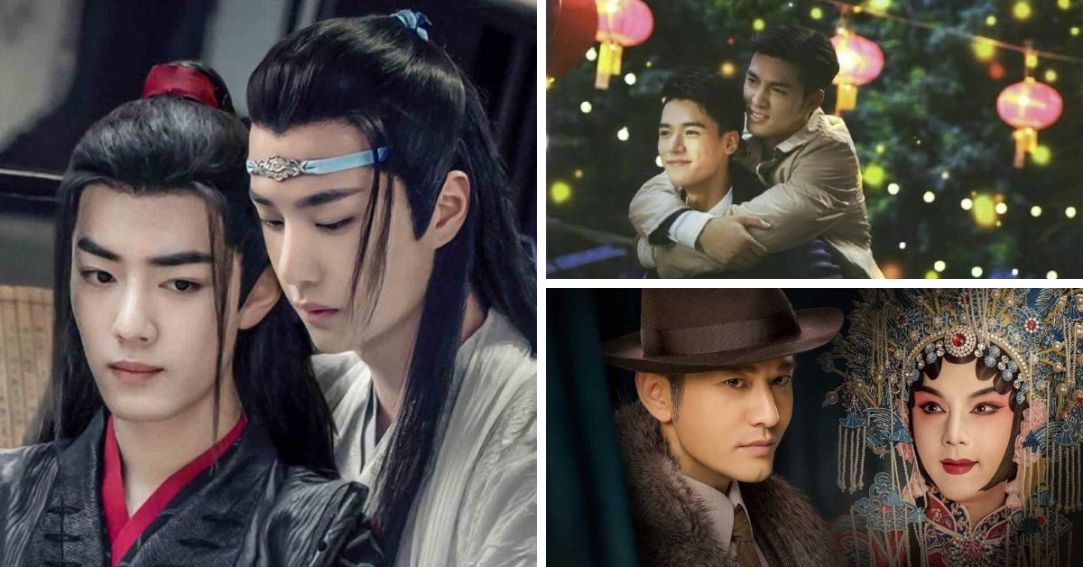 This survey of BL fans for the top 10 Chinese BL drama series of all time may surprise you!

The LGBT+ community may be heavily censored in China. But Chinese filmmakers have found creative ways to skirt China’s censorship arm.

Chinese BL dramas often disguise their romances as bromances. But it’s hard to ignore the homoerotic elements that are oftentimes not subtle at all.

10) Till Death Tear Us Apart

Overview: Starring BL alumni Danny Jiang and Kevin Yan as childhood sweethearts, Till Death Tear Us Apart is set in the republican era.

The story focuses on Liu Yu Sheng (Danny Jiang), who hails from a rich family. After studying abroad, he returns home to find his inheritance stolen by his other family members. To make a living, he has to work as a teacher at a small school. In this hopeless state, he meets a dear, old friend Zhou Yao Hua (Kevin Yan).

BL Fan Commentary: This show ranked lowest for obvious reasons. It wasn’t because of the lack of chemistry between the main leads, but the inadequate promotions. So, probably most Chinese BL fans don’t even know that this show exists.

The romance is swoon worthy and both actors have a sweet chemistry. The show is definitely worth watching!

Xia Yao (Simon Gong), born into a wealthy family with renowned ancestry, is a playboy who has turned over a new leaf. Yuan Zong (Jason Xu) is an ex-soldier from the special forces who opens a bodyguard training company after being discharged.

Unexpectedly, Yuan Zong’s little sister falls for Xia Yao’s charms. But she finds it difficult to break down his barriers. She seeks help from Yuan Zong, who ends up falling for Xia Yao instead.

BL Fan Commentary: Their chemistry is sizzling hot and even blatant censorship couldn’t dim the sensuality.

Yuan Zong’s stoic, disciplined demeanor is a direct contrast to Xia Yao’s lively attitude. The differences in their personality is a stark contrast and watching them grow closer was a truly enjoyable experience.

8) The Sleuth of Ming Dynasty

Overview: In 15th-century China, a government official named Tang Fan (Darren Chen), renowned to be the best detective in Beijing, teams up with guardsman Sui Zhou (Fu Meng-Po) and a powerful imperial eunuch Wang Zhi (Liu Yaohuan) to work on a series of cases.

BL Fan Commentary: While the storytelling might seem lacking, the actors infuse the drama with an energy that glosses over the inadequacies in the script. The drama solely focuses on the concept of found familial relations; Tang Fan and Sui Zhou’s makeshift family with Dong.

This show will be forever etched in my mind because of its realistic portrayal of love and acceptance. The drama had an open ending and although it has been two years, loyal fans are still awaiting the news about a possible sequel.

Overview: This wildly popular 2016 series focuses on the relationship between Luo Yin (Xu Wei Zhou), a poor and brilliant student, with his new stepbrother Gu Hai, who is rich and brash.

Based on the classic “Enemies to Lovers” and ‘Opposites Attract’ trope, Addicted suffered a blow when its massive popularity caused Chinese censors to stop it from airing its last 3 episodes.

BL Fan Commentary: Despite suffering a severe blow by Chinese censorship, this drama still continues to be in the limelight. The combustible chemistry between Xu Wei Zhou and Johnny Huang Jing Yu could be the plausible reason.

Author Chai Jidan (who wrote the original novel) is currently working with media giant YouKu on a subtle downgraded version, which will be marketed as a bromance. I’m not sure if I want to walk down that path again, because remaking would be a major disrespect to the original. Fingers crossed!

Overview: The story is based in a dystopian universe where humans inhabit a planet called Haxing. They co-exist with alien races like the Yashou Tribes (shapeshifters) and the powerful Dixing clan (who are cursed to live underground devoid of sunlight).

The web series follows the relationship between a detective and a professor who investigate supernatural phenomena.

BL Fan Commentary: There is something to be said about a romance that spans over 10,000 years. Shen Wei and Zhao Yunlan’s love story is indescribable and leaves you feeling wounded. It’s tragic and yet unforgettable.

Although Guardian suffers from inconsequential glitches that mar the production quality, the show is definitely a worthwhile watch for BL enthusiasts!

The attraction is pliable from the moment the two male leads meet and their journey is marked by trials and tribulations. As both of them work together to rebuild the famous Shui Lou Yun Opera House, their fates get entwined.

BL Fan Commentary: Winter Begonia is a classic that needs to be savored slowly and enjoyed with time.

The show’s brilliant cinematography coupled with its vibrant sets and excellent casting make it a truly stunning experience.

BL Fan Commentary: While the main couple have a scintillating chemistry, the second main couple Bai Chi and Zhao Zhen have a comparable romance.

Overview: The resigned Chief of a former assassin organization, Zhou Zhi Shou is awaiting death as he spends his last days wandering dressed down as a beggar. Wen Ken Xing on the other hand, is the highly erratic and arrogant Chief of Ghost Valley.

These two complex personalities meet under strange circumstances and are forced to protect The Mirror Sect’s orphan and heir, Zhang Cheng Ling.

BL Fan Commentary: Simon Gong and Zhang Zhe Han have an indomitable chemistry onscreen and they share a great camaraderie offscreen.. Each character has a separate storyline, is riveting and will leave you spellbound.

Overview:  The Untamed is a story of resurrection and love that transcends time and tide.

Based on the fantasy web novel by popular author Mo Dao Zu Shi, the story chronicles the life of Wei Wu Xian as he experiences life shattering realities and betrayals.

BL Fan Commentary: Both Xiao Zhan and Wang Yibo have an undeniable chemistry which shines throughout. The Untamed is definitely a classic retelling with enchanting music and equally beautiful characters.

Overview: This story follows two very different men; one kills, while the other heals. Jiang Yue Lou is a temperamental police chief, while Chen Yu Zhi is a kind-hearted doctor.

BL Fan Commentary: Killer and Healer has won hearts, because of its realistic depiction of romantic inclinations.

Although the love story was tragic, the actors portraying the characters became quite popular, thanks to their chemistry. Truly phenomenal and commendable, Killer and Healer is definitely a winner!