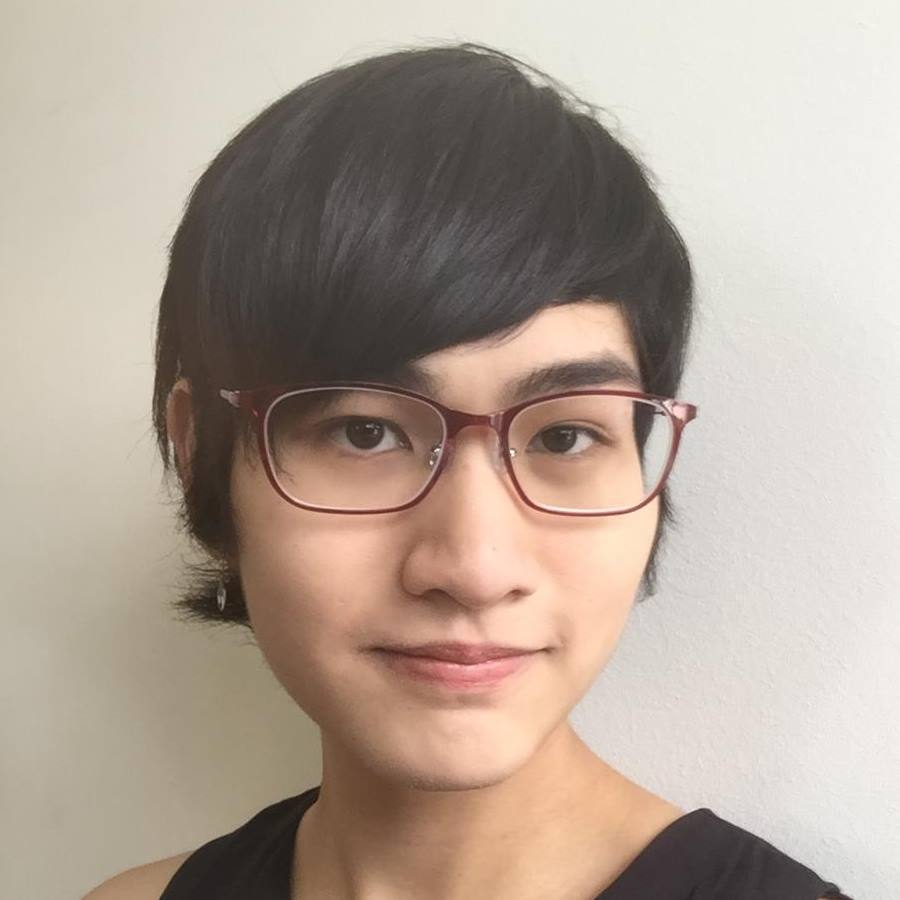 Meet 20-year old Singaporean Cassandra Thng – the woman behind the viral ’31 days of Trans Visibility’ project that made headlines on both mainstream and alternative news sites!

In the month leading up to International Trans Visibility Day, Cassandra embarked on a mission to shine the spotlight on the trans community and the issues they face. Her efforts culminated in a groundbreaking photo project that featured Cassandra traversing through town holding a placard that states ‘“I am trans, will you take a photo with me?”

Luckily for Cassandra, her call for support was met with overwhelming positivity. Not only did she snag tons of pictures with supportive strangers, her project earned a feature on both The Straits Times and Mothership SG!

While the response to her photo project have been incredibly positive, Cassandra didn’t always enjoy such support. 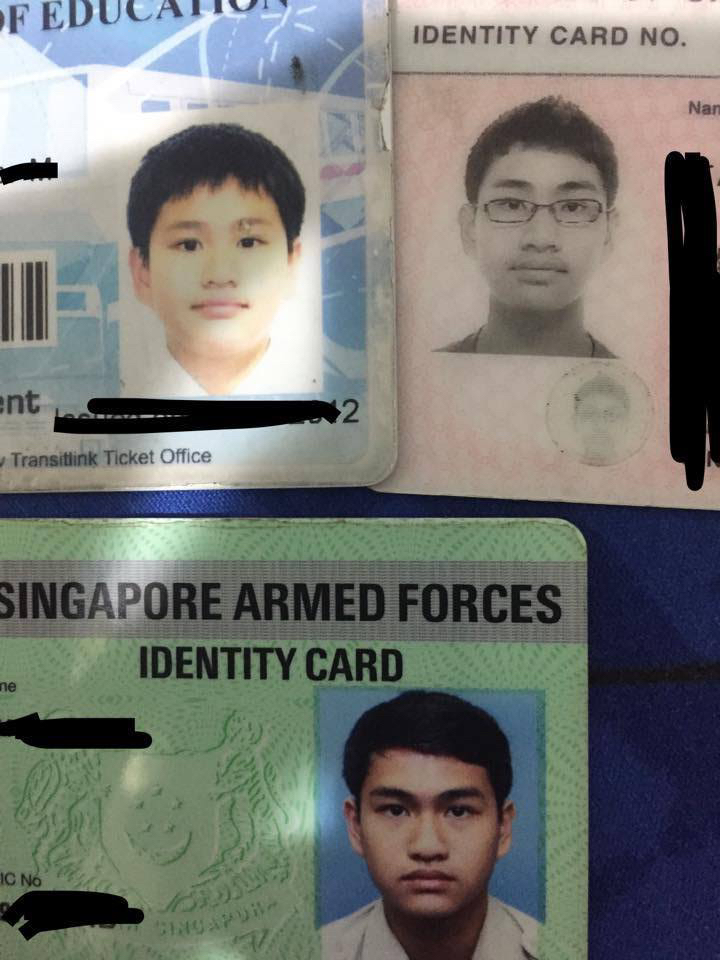 From the tender age of 4, Cassandra was already implicitly aware of the fact that her gender identity was something that she should keep hush.

I knew I had to be secretive about things, because my family would not take it well.

I acted the part, playing off masculine stereotypes and generally fitting in as “one of the guys”.

Cassandra’s acting was so convincing that she managed to escape the kind of bullying that torments many trans youths. But despite her prowess in playing to societal conventions, she was not spared from the kind of depressive episodes that queer youths are often afflicted by.

I’ve experienced depressive episodes on and off since secondary two.

They were solely about being trans and what that meant for my future, and how much I hated myself and my body. 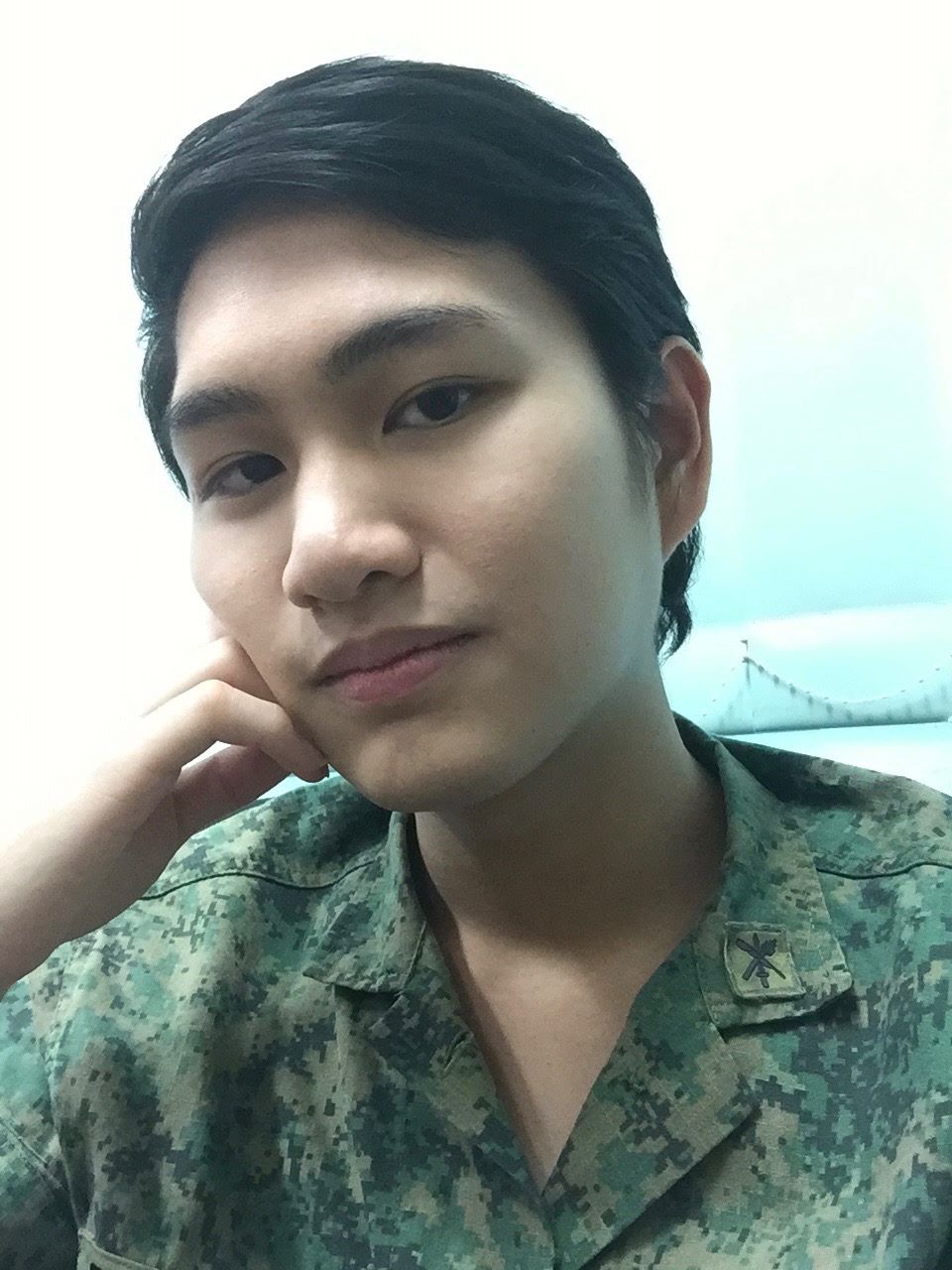 While Cassandra was generally able to handle the enforced gender binary nature of school, National Service (NS) brought with it a whole new set of challenges that almost broke her.

NS only sealed in my decision.

Thankfully, Cassandra didn’t give in to those dark thoughts. But her traumatic experience of being conscripted into the Army is an experience that she will not be likely to forget anytime soon.

I’ve never really been articulate at describing just how painful it was to be in NS as a trans woman with severe dysphoria.

But it made me so anxious that I would be constantly shaking and had a couple of anxiety attacks leading up to a full-blown panic attack. 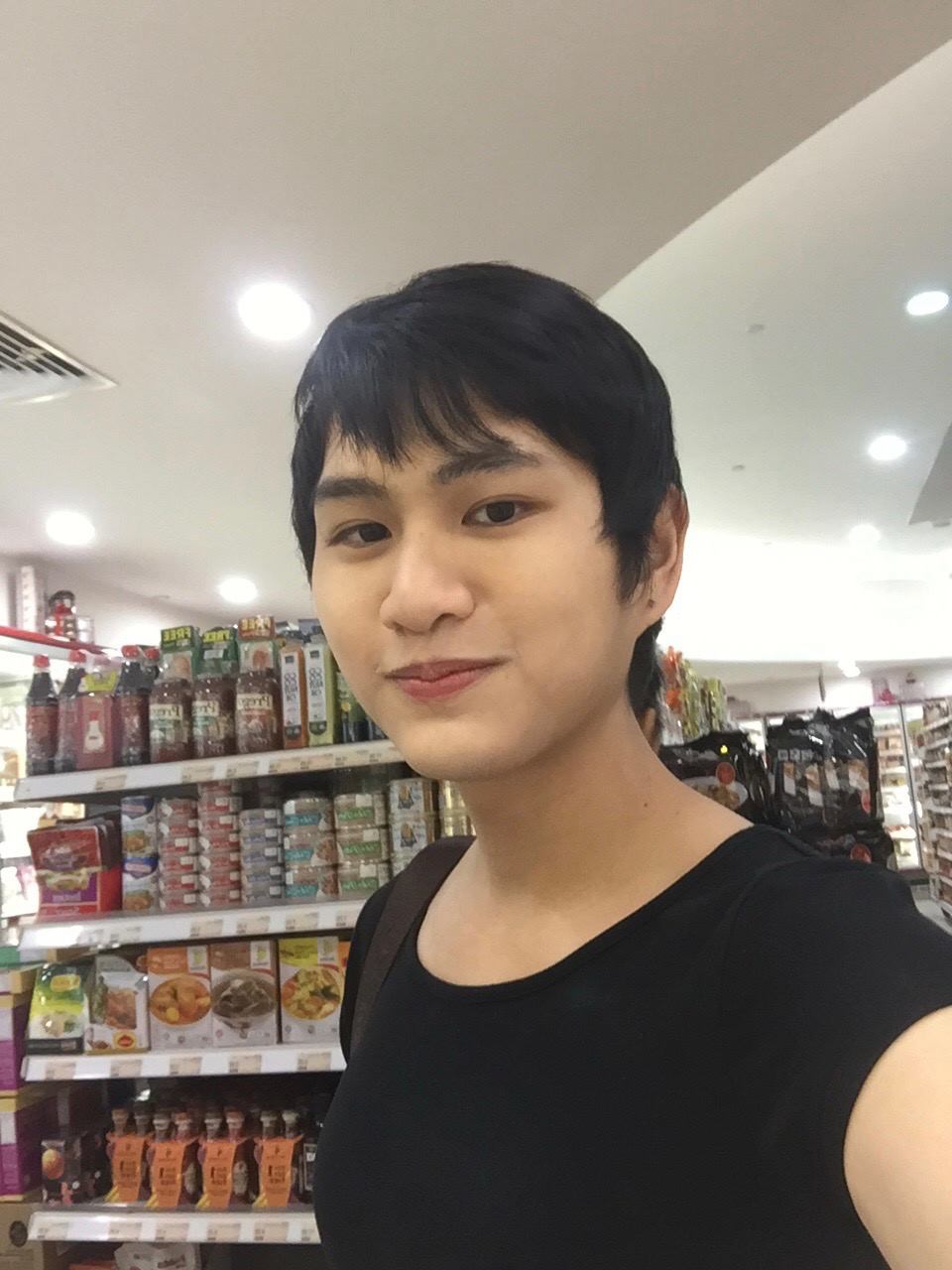 But National Service wasn’t the only reason that nearly drove Cassandra to end her life. The lack of acceptance from her family was another key factor.

The first person from my family I told was my mum. She wasn’t accepting at all, and basically came up with a lot of reasons as to why I shouldn’t transition.

I believed her, which contributed to the suicidal ideation because I believed that I couldn’t possibly transition well.

The situation at home may have improved considerably since then. But Cassandra is well aware of the fact that not every trans person is as lucky as her, which led in part to her goal of bettering the trans community.

Deeply passionate about helping the local trans community, Cassandra has become known for her highly successful ’31 days of Trans Visibility’ project which was inspired by a Tumblr post.

For every single day leading up to ‘International Trans Visibility Day’ on the 31st of March, Cassandra spoke out about issues revolving around trans visibility and rights on her Facebook page. She ended off her project with a photo album of her in town holding up a sign calling for everyday Singaporeans to take a picture with her to show their support for the trans community.

Since it was to be about visibility and taking selfies and being oneself, why not I take that to the next level by taking photos with and being visible to complete strangers?

I felt like that would best capture the spirit of visibility and raising awareness, and hopefully that people around could see that others were supportive whenever they chose to take a photo with me.

Some pictures from her photo project: 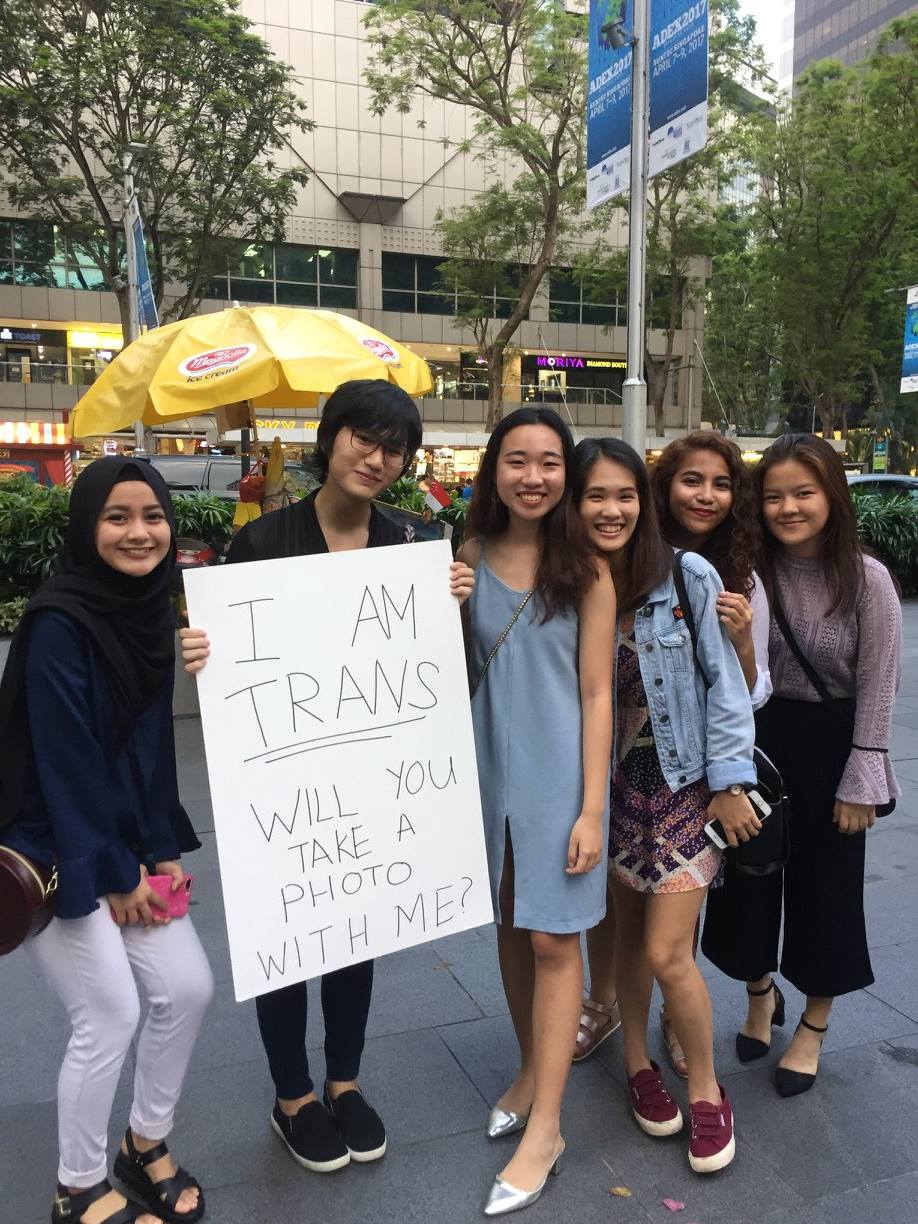 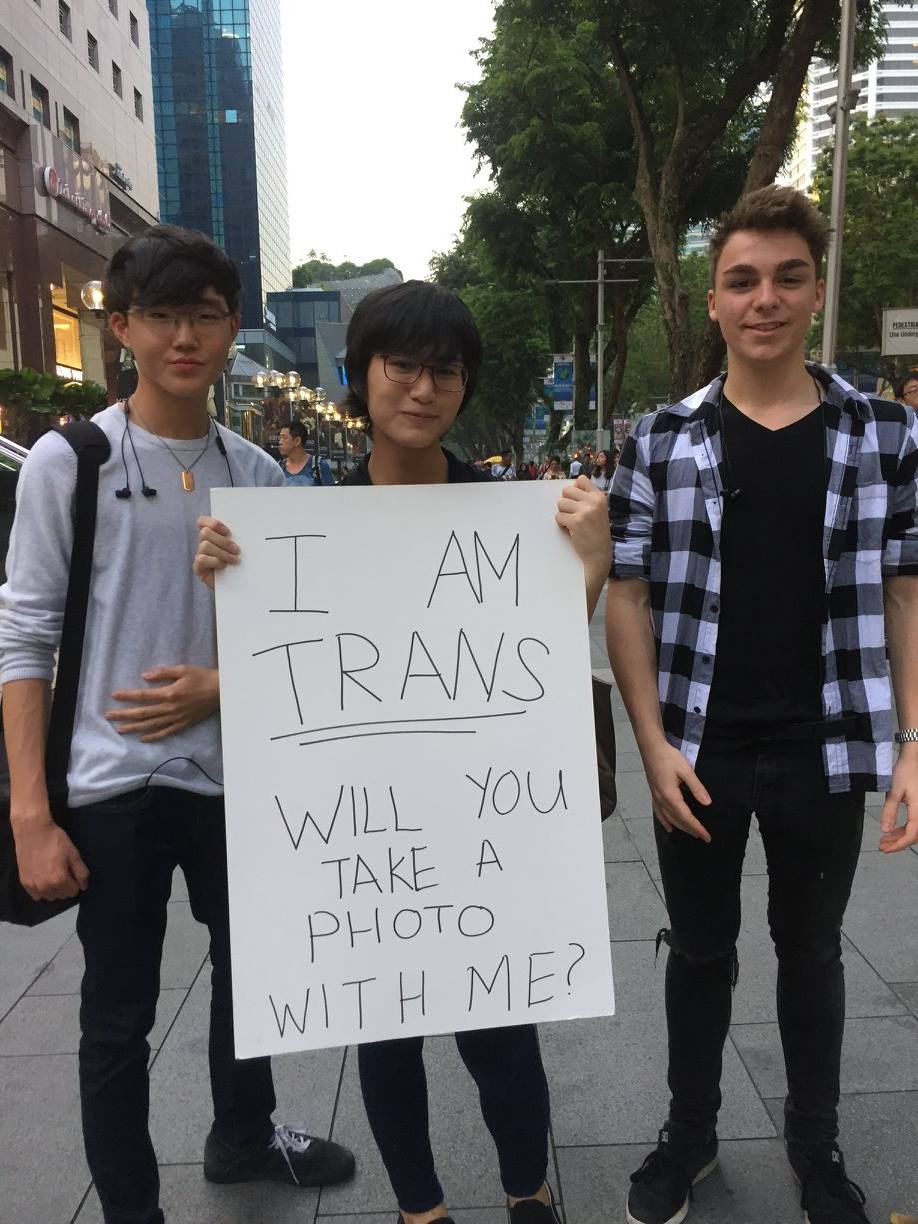 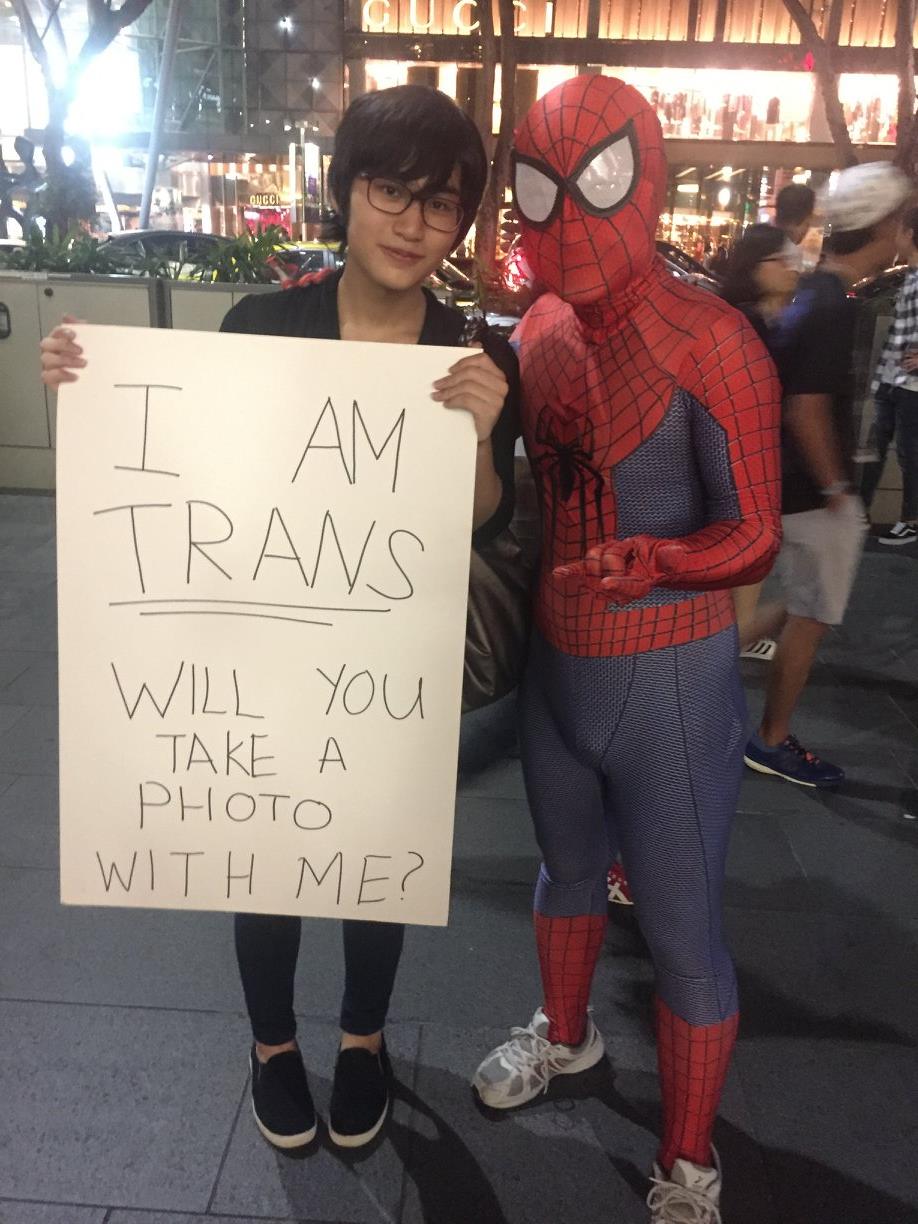 Currently working as a part-time waitress while waiting for her University results, Cassandra is planning to pursue a degree in either Medicine, Law, Liberal Arts or Economics.

Fundamentally, I want to be an agent for change in the trans community in Singapore.

Whether that means becoming a surgeon so that gender confirmation surgery becomes available, or a queer-friendly lawyer that will fight for the rights of queer Singaporeans etc, I want to be in some way part of the change that will eventually shift Singapore into a more receptive mindset for queer people.

Apart from her impactful photo project, Cassandra is also part of the team that launched a website called Transgender SG that aims to be a consolidated online resource for all trans related matters. 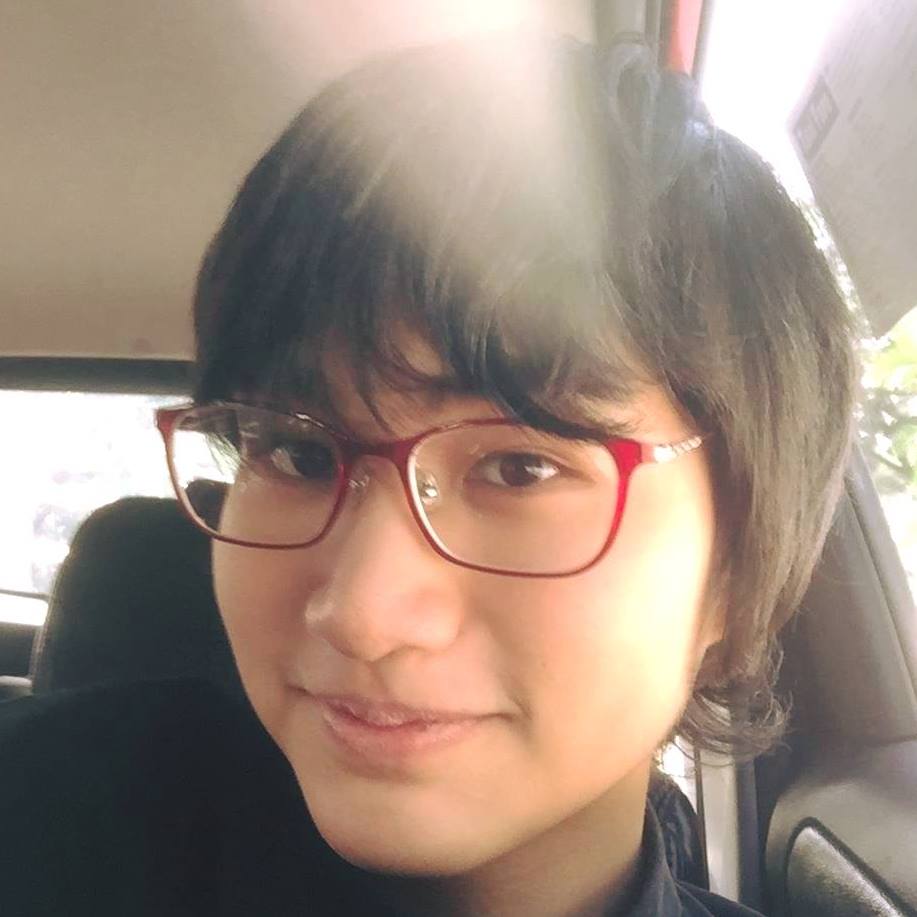 1. When did you first realise that you were transgender?

I was 14 and chanced upon something related to the concept of being transgender, and decided to look into it more. What I found were narratives and experiences that tied in very closely to what I had been experiencing since I was a child.

I realised for the first time that there was a term and a community to describe what I’d always felt. In a way, it felt like something shifted, and I started becoming aware of how things I did and used to do were constructed through a farce of self-protection.

I want to state at this point that not everyone who is trans realises at an early age, and not everyone falls within the binary model, but my narrative was certainly rather normative.

2. How did your family respond to your gender identity and sexuality?

Over the past two years, my mum and me have shifted into a sort of compromise where I get to do what I want and she maintains her position of not being able to accept me as her daughter but still treats me like a mother would her child. It’s a compromise that I am thankful for, because it’s not something that most trans people get.

My sister has been overwhelmingly supportive. She was the quickest person to change the way she addressed me and is fiercely protective. She’s even been trying to work queer issues into the stuff that she does, and it’s just an overall incredibly heartwarming feeling.

My father was upset with the situation when I came out to him, due to his feelings of loss of his son and his traditional Chinese beliefs affecting how he feels about me not being able to have children. But he ultimately wants the best for me, and has told me to be the best that I can in whatever I do, so people don’t just evaluate me on the basis that I am trans.

3. How has the transitioning process been like for you so far?

I’ve been ridiculously lucky, in a way that many trans people have not been. I started getting hormones online in June 2016, and managed to get switched to being properly prescribed them in November the same year. I’ve experienced a lot of wonderful changes.

Mannerisms have not been difficult for me, it was more of letting the actively learned masculinity drop away and allow myself to just be. I’ve had great success in training my voice to sound more feminine. My body was not too masculine and all of this put together, has in 10 short months made me very cis-passing.

All this is much better than I’d ever expected, honestly. I’m now just waiting for my hair to grow out because once that happens I’ll get even fewer stares than now, and I’ll be able to fade into the background like I’ve always dreamed of.

4. What motivated you first to become involved in LGBT activism?

At first, all I wanted to do was be completely stealth and not let people know that I was trans.

But after speaking to The Straits Times a couple of times and responding to people’s calls for queer individuals for their school-based photo projects, I realised how much work still needs to be done in the area of trans visibility and rights.

Talking about the issues that I and others face always raises a passion and fire inside that desires to eradicate these issues through my own efforts. Between working for the community and preserving my own desired way of life, I ultimately decided that I wanted to work for the community, consequences be damned.

5. What were some of the challenges that you faced with regard to your ’31 Days Of Trans Visibility’ project?

I think I actually had a really good experience.

The biggest downside was the sum total of people who cast disapproving glances my way, whether at being trans or being an activist.

6. How has the response been like so far for your 31 Days Of Trans Visibility Project?

I’ve run in more privileged and educated circles, I guess, and as a result people have generally been more receptive to me being trans. I’ve also been told that writing a piece each day has been incredibly helpful in aiding those who aren’t so aware to understand more about trans people and what I experienced.

And of course, I received a pretty good response to the album TRANS-POSE in terms of the overall picture. My friends and people within the community who contacted me were incredibly supportive and excited about it, but commenters on the Mothership article weren’t as partial to it.

I think the biggest one would be that people think we are deluded.

This thread of thought snakes its way through religious views on being trans, people believing that we’re mentally ill, and people just generally being unable to accept our existence because they think we’re wrong. We’re not delusional.

The best way to improve the quality of life of a transgender person is to let them be who they are. If that constitutes changing pronouns, names, wearing different clothes, transitioning, and/or surgery, so be it. It reduces our risk of comorbidities such as depression and anxiety. It decreases our suicide risk. And as society becomes more receptive and accepting, these risks will fall further.

8. What advice do you have for other trans people living in Singapore?

You have community. Whether it is through talking to other trans people, being part of LGBTQ+ organisations, having support groups or whichever, you have community. Our communities are hidden in places that you will find if you are searching for them.

Things might be difficult and everything might feel rough, but I promise that we are working on making things more bearable. The institutions in place will feel like they are categorically against you, but there are sometimes provisions made. They could be a lot better, but they’re there.

Above all, stay safe. Go stealth if you feel you need to. Do whatever you think you need to protect yourself. Survive in the ways you can. Not everyone is privileged enough to be an activist, and your safety always comes first in a country where we have very little recognition. 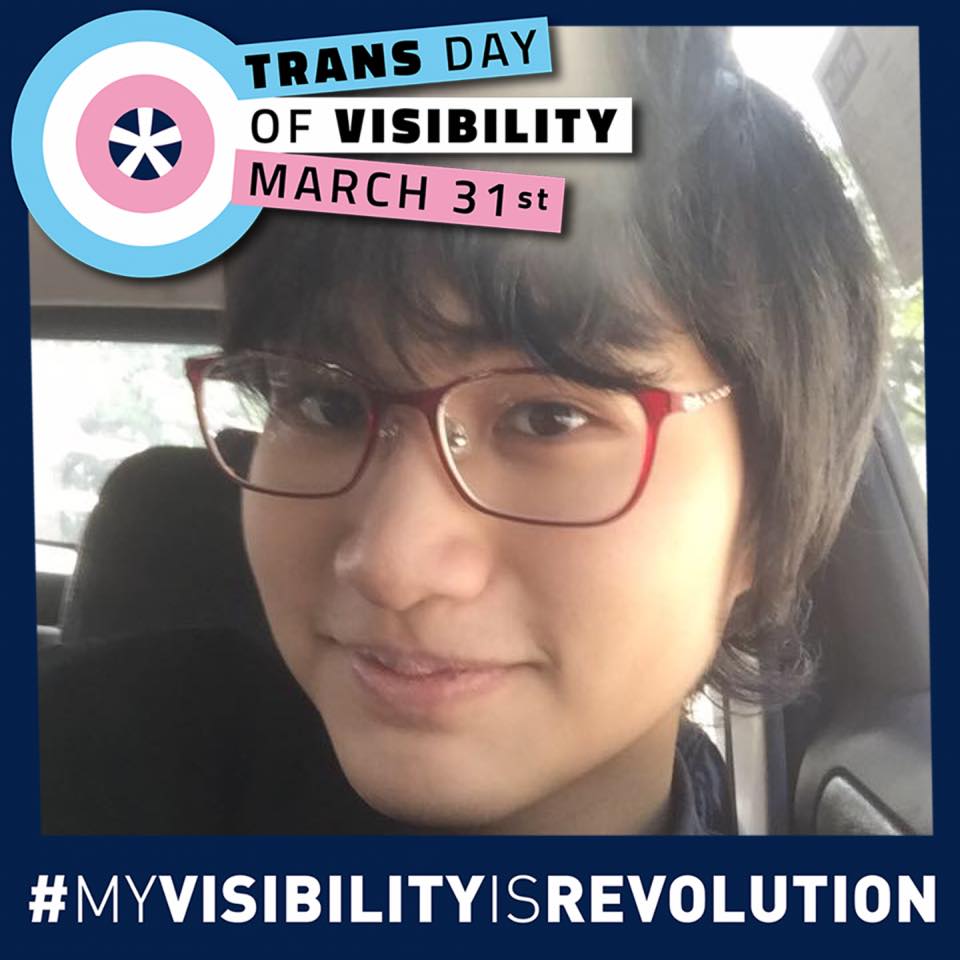 Once again, Dear Straight People would like to thank Cassandra Thng for sharing her story with us.

If you would like to keep up to date with how Cassandra is doing, you can connect with her through Facebook. You can also check out her groundbreaking photo album here.

2 comments on “Out Of The Closet: Cassandra Thng Shares Her Story”