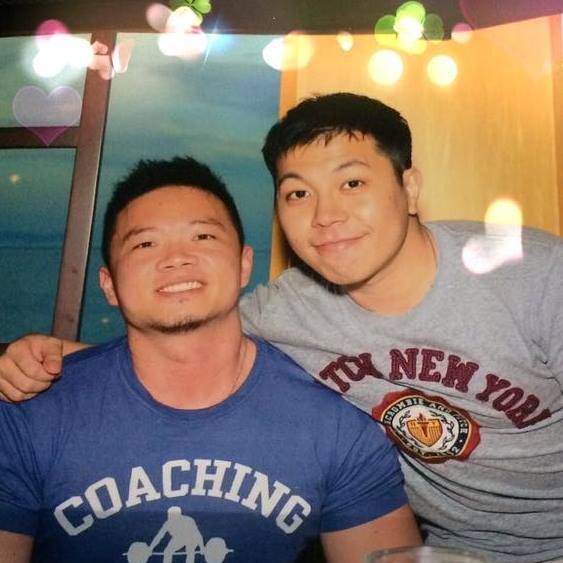 On the surface, there’s nothing particularly striking about Sean and Edmund. They don’t have a sob story to share. Nor are they an Instafamous couple with a formidable online following. But speaking from the perspective of an increasingly jaded gay singleton, I find them to be oddly inspiring.

You see, Sean and Edmund are a monogamous gay couple. And while that may not sound like much to all you straight readers, anyone from the gay community will understand just how inspiring that simple revelation actually is. 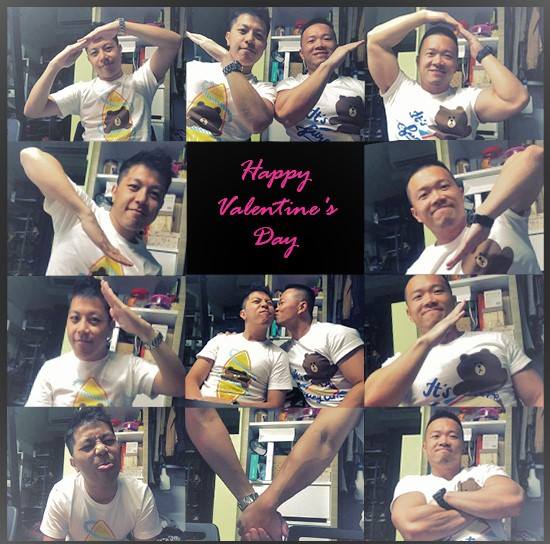 In a scene dominated by hook-up apps and men with scant regard for social boundaries, monogamy is increasingly becoming something of a myth. While there are plenty of examples of long-lasting gay relationships, it’s hard not to ignore the amount of cheating-induced drama that goes on in the gay community.

So if like me, you need a heartwarming tale to restore your faith in the power of love, look no further than Sean and Edmund; the very epitome of #relationshipgoals!

No doubt that many stories and even our past experiences might have led us, at times, to believe that monogamy had become some folklore that people can only imagine of in this circle.

However, we still strongly and stubbornly refuse to believe that gay relationships are destined to end up in misery.

But before we delve into their love story, let us start from the beginning. 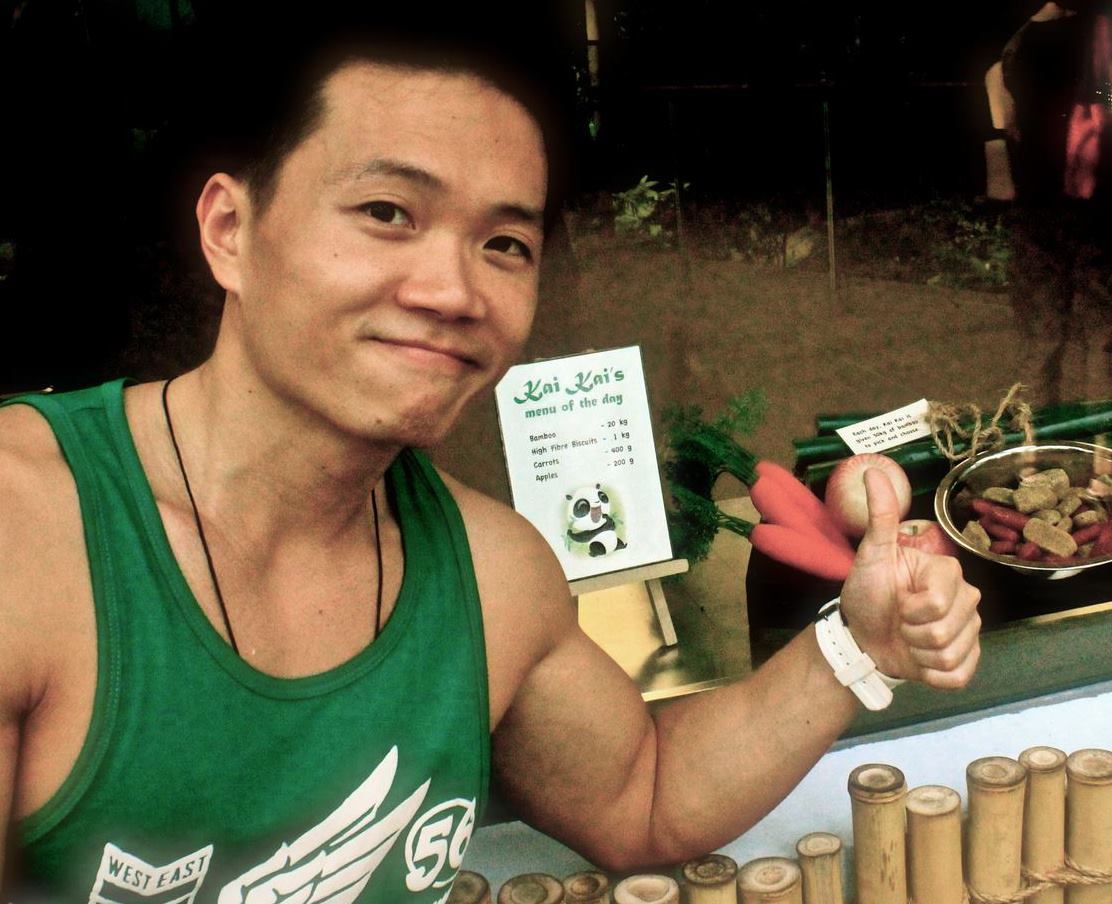 Currently working as a freelance personal trainer, Sean struggled for a long time with his sexuality.

With nobody to turn to, all of his pent up frustration eventually caused a meltdown that pushed him to drop out of junior college. After his breakdown, Sean decided to pursue a diploma in multimedia software engineering which ironically, was where he experienced his first gay crush.

I confessed my feelings to a straight guy. After the confession, things got awkward between the both of us.

However, I learnt a valuable lesson to never fall in love with a straight man!

It took Sean almost a decade to truly come to terms with his sexuality. And it was only then that he finally found someone to call his own.

I was in denial til the age of 30. That was when I decided to accept myself for who I am.

I did not come out to anyone until I found Edmund. After going steady with him, I let some of my closest friends know as I wanted to share this joy with them. 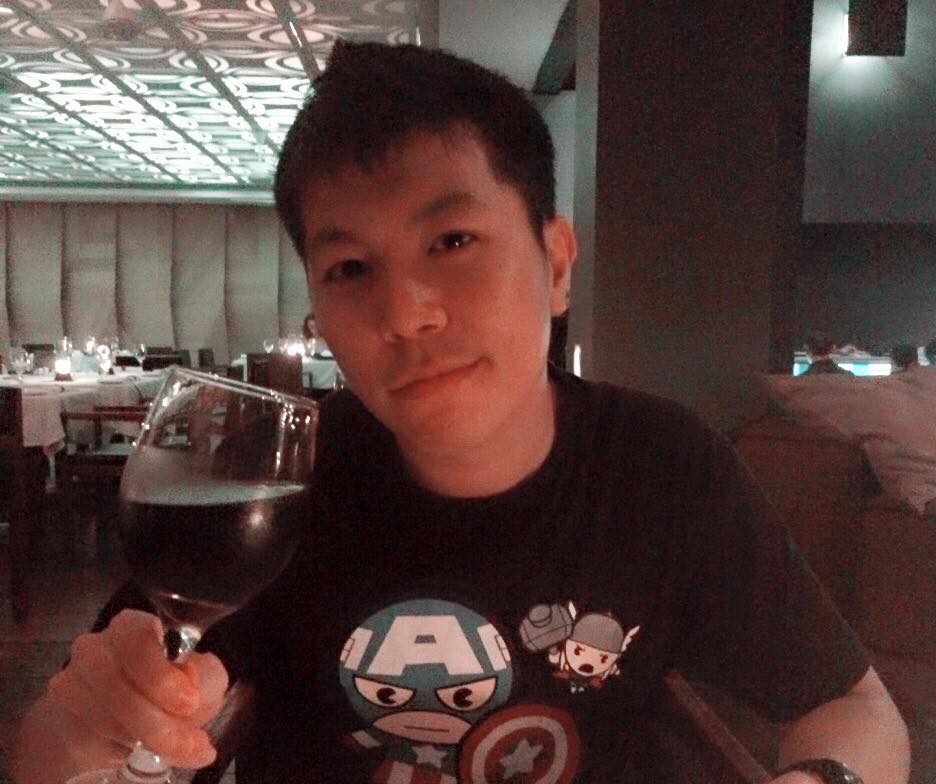 While Sean managed to strike the jackpot with his first boyfriend, Edmund wasn’t so lucky.

My love life before I met Sean was MESSY!

A lot of trial and error. I was someone’s toy, someone was my toy, it was as most gays would call it – DRAMA.

Edmund came out of the closet when he was still a first year student at a local polytechnic.

Another girl happened to be sharing about her sexual orientation, and that kind of gave me the courage to share my thoughts about it too.

My coming out period in Poly was the most stressful time of my life as many things occurred almost back to back.

It was only during my days in University that I started to ‘straighten’ out and settle my shit. 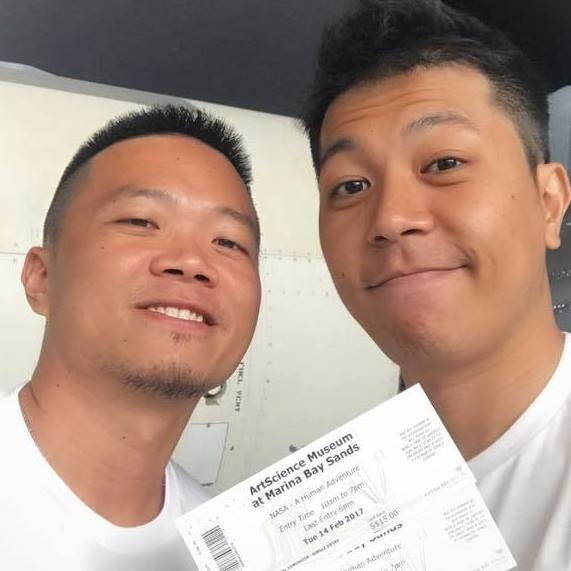 How They Met And Got Together

Like many gay couples, Sean and Edmund met one another through the dating app ‘Jack’d’.

Our first date was at the Lego exhibition at Art Science Museum. We had a great time pretending to be kids and going awe at the Lego art pieces.

We did what usual couples did; took many selfies and ended the night with an awesome dinner at Standing Sushi Bar. Thank God both of us love sashimi!

After dating for 3 months, Sean and Edmund decided to take the plunge by officially becoming a couple.

All the courting, playing hard to get etc took roughly about three months before we decided to give this a shot and we set a date (cliche, but important!). 10/11/12. 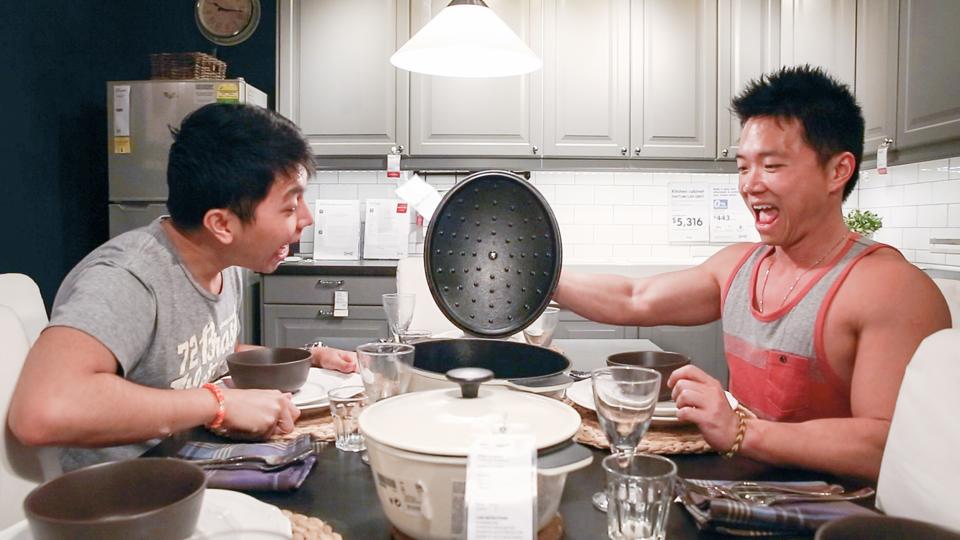 5 years on, their bond remains as strong as ever.

Fiercely committed to one another, Sean and Edmund are living proof that monogamous relationships can and do work in the gay community. And while they may not know it yet, their happily ever after is only just beginning.

Sean and Edmund have very kindly taken time out of their busy schedules to answer our Q&A so read on to find out more about them! 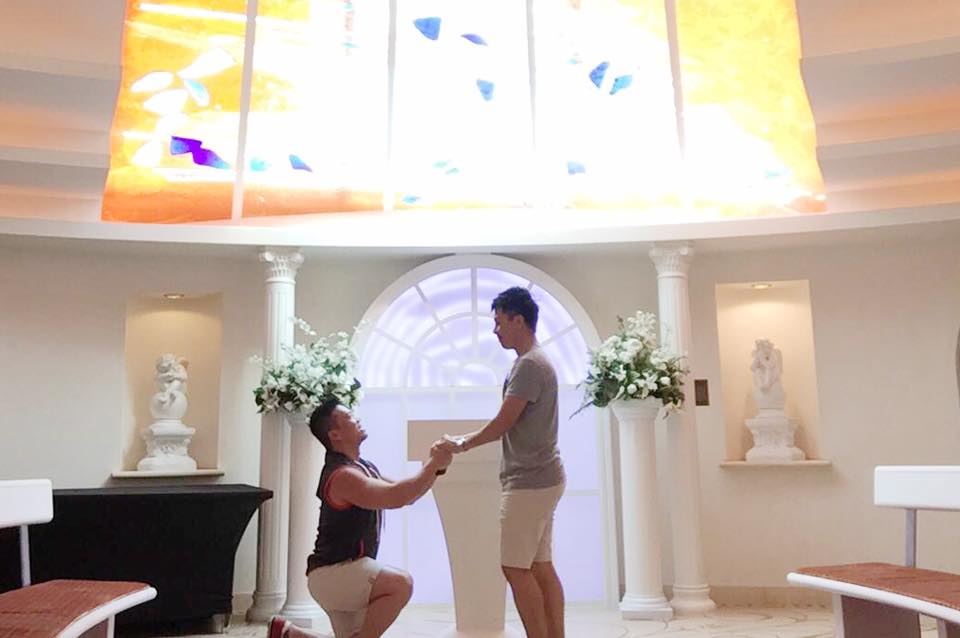 1. How did the two of you end up getting together?

Edmund: Being a personal trainer, proper diet is very important to Sean. Back then, I was working shifts in the hotel line and meals were irregular. Seeing this, he made it a point to deliver meals to me.

There was one particular day I was so busy that I made him wait three hours for me to deliver lunch. He was not angry when I finally met him, but instead was smiling as he handed me the already luke warm subway and some fruits. He also told me he likes to see me in office wear. Sadly I could not stay long as I needed to rush back to settle more work.

So this became one of Sean’s trump card to seal the deal. I mean, who would actually wait three hours just to deliver food? I was touched by that move.

2. What has been the greatest challenge to your relationship so far?

Edmund: The greatest challenge is planning our future together. A house, kids or dogs? The usual things any heterosexual couples have to deal with.

Of course, on top of these, we have to deal with people around us coming to accept our relationship. Sean’s parents are still unaware of his sexual orientation.

In addition, the current laws do not acknowledge our love, thus rendering us more challenges in our planning.

3. What are the challenges of being in a monogamous gay relationship and have either of you ever considered opening up the relationship?

Edmund: We would say the challenges are the same for any heterosexual relationships except that the law is not on our side.

We have talked about such topics before, fortunately, we are both firm on monogamy. It is already challenging enough to sustain a relationship in Singapore, opening up a relationship creates more complications.

4. What is your message to those in the gay community who don’t believe that it is possible to have a monogamous long lasting gay relationship?

We acknowledge that not everyone feels that monogamy is for them these days, so, whatever floats your boat.

We believe a relationship, monogamous or not, should persevere as long as the parties involved are agreeable and committed to whatever cause they started with.

5. What’s your definition of happily ever after?

A house, financial freedom and a kid or a dog together? We do not put our happily ever after on emotions as we both agree there will be times we will want to kill each other. We acknowledge that feelings are important but commitment is what we both feel matters more.

Trust us, there were definitely trying times; emotions got the better of us and almost wrecked our relationship. However, we both usually will come together and remind each other of the commitment to work it out no matter what. Happily ever after should not be misinterpreted as, no disagreements/fights and always all over each other and in love eternally.

6. What do you think is the biggest misconception straight people have about gay couples?

That we are any different from them.

We practically face the same issues. We are constantly portrayed by the media to be promiscuous and drug-addicted. Funny thing is there are plenty more of such vices on the other side of the fence.

We are definitely ‘pro-family’. Give us the right and we will adopt.

7. What’s your advice to other gay couples?

We strongly believe that love is not a fairy tale and that relationships do not just work themselves out. Both parties must really plan their lives together if not, we see no purpose to be together if we are going to live our lives separately.

A relationship is a life-time project. If either one is not going to commit to building it, it will go nowhere in the end. Unfortunately, due to circumstances (laws, fear of discrimination etc) in Singapore, we have come across many couples who do not plan a future together and just live each day as it goes. Often enough, things kind of unravel along the way.

If you fail to plan, you plan to fail. Make it work by planning together.

We would like people like us to know that coming out is a journey. It is not a one day I tell everyone, “Hi, I am gay!” next moment, everybody HAS TO ACCEPT us. It takes time for us to learn to accept ourselves, why would it take others any faster?

However, it does not mean that all is lost. In the end, we believe that if you treat people right, most will treat you right the day they find out about you. If not, let them go, we are sure the world is big enough for everyone to find their place.

To end this, we would love to quote something from ‘Princess Diaries’ HAHA!!

“Courage is not the absence of fear, but rather the judgement to something else more important than fear.”

The princess in Edmund says so! May everyone have that courage to find their love and conquer their fears!

Find Out More About Sean & Edmund! 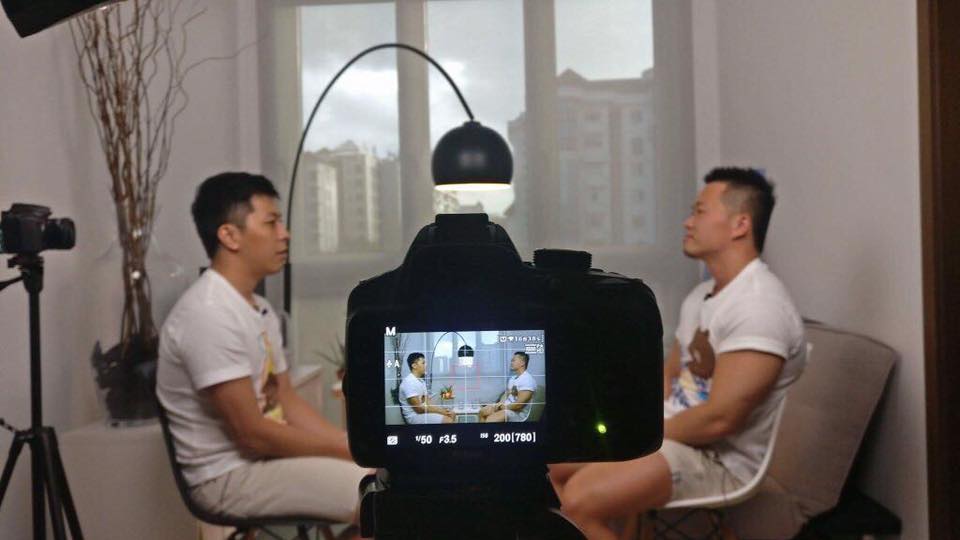 Recently featured on two episodes of SG Narratives that earned a mention on The Straits Times, find out more about Sean and Edmund by watching them tackle tough questions such as ‘Am I your best sex?‘ and ‘Why do you love me‘!

Once again, Dear Straight People would like to thank Sean and Edmund for sharing their story with us.

If you would like to keep up to date with how they are doing, you can connect with them through Facebook via Sean Chin and Edmund Emmanuel. You can also find Edmund and Sean on Instagram via @how.we.started and @seanchin82 respectively.

Out Of The Closet: Patricia & Sham Share Their Story

2 comments on “Out Of The Closet: Sean & Edmund Share Their Story”