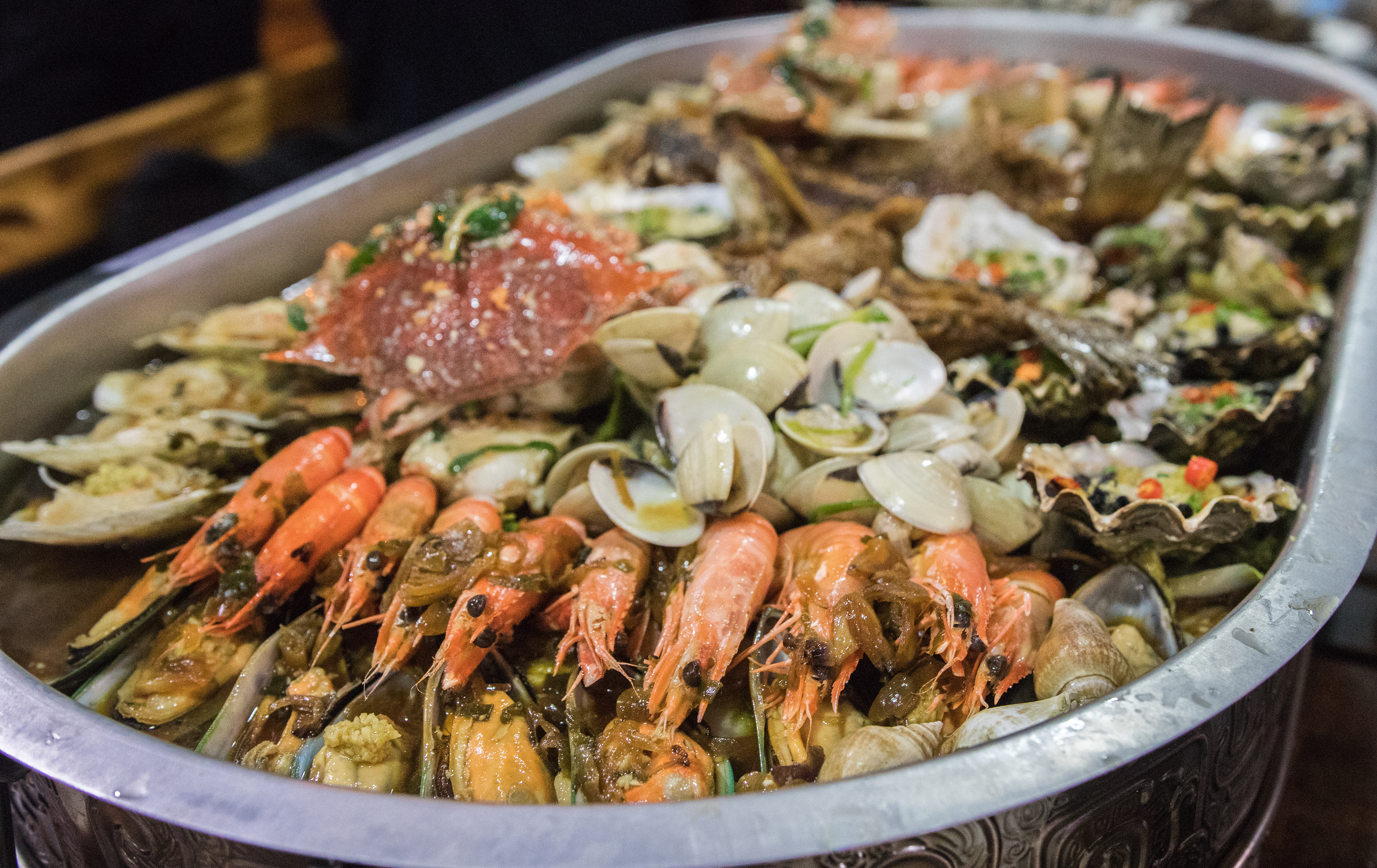 We don’t usually write about food, but we made an exception for this new seafood restaurant that serves FREE-FLOW BEER after 9pm with no minimum spending!

Giant seafood platters are not new to our food scene, but truth be told, I’ve always been afraid to try them. After all, the sea of comments online about customers getting diarrhoea after feasting on one isn’t exactly encouraging. So I’ve told myself to hold back for the greater good.

When I heard about how the new Eight Signatures Seafood Restaurant prepares their Eight Signatures seafood platter using live fish and shellfish sourced daily though, I felt reassured enough to give it a go. 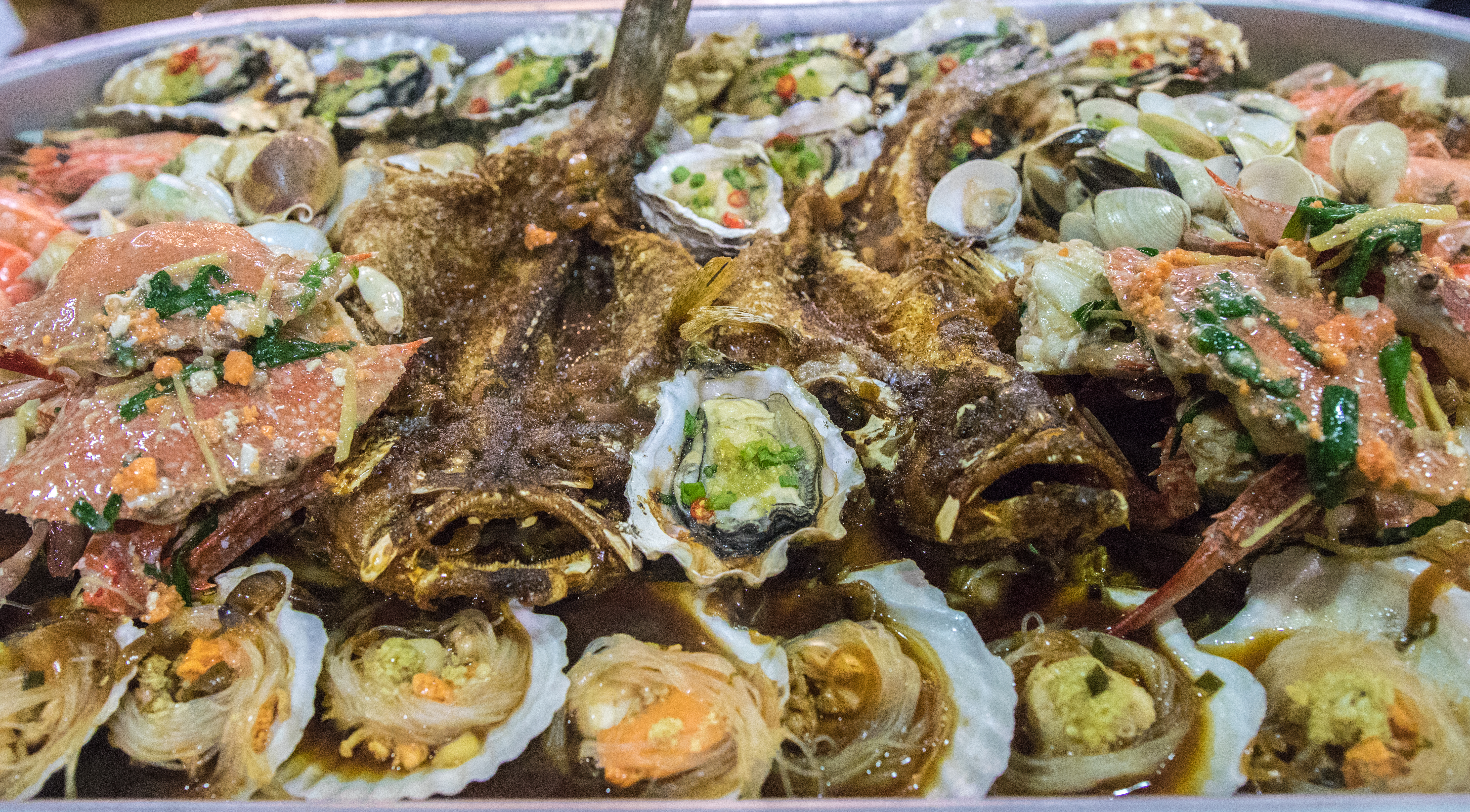 Each platter comes with eight types of seafood, namely garlic mussels, flower crabs, prawns, scallops, oysters, deep-fried fish, gong gong, and clams. Each type of seafood is prepared separately, and then placed into the platter along with their Original or Ma La broth, of which we went for the former.

As a complete devotee to shellfish, I went straight for the oyster and scallop. A look at the plump oyster made my mouth water, and I devoured the whole thing right away. What struck me most was how fresh and clean it was – there were no notes of sand or any grainy texture at all. The broth it was sitting in was packed with umami flavour and small slices of chilli padi added an almost unnoticeable hint of heat.

The scallop was equally delicious. Lying beside strands of vermicelli, each scallop was considerably big and wasn’t rubbery at all. Attached to its meat was the rich orange roe which I absolutely adore. The prawns as well were fat, juicy, and easy to peel – I’m pretty sure I ate at least five of these babies. 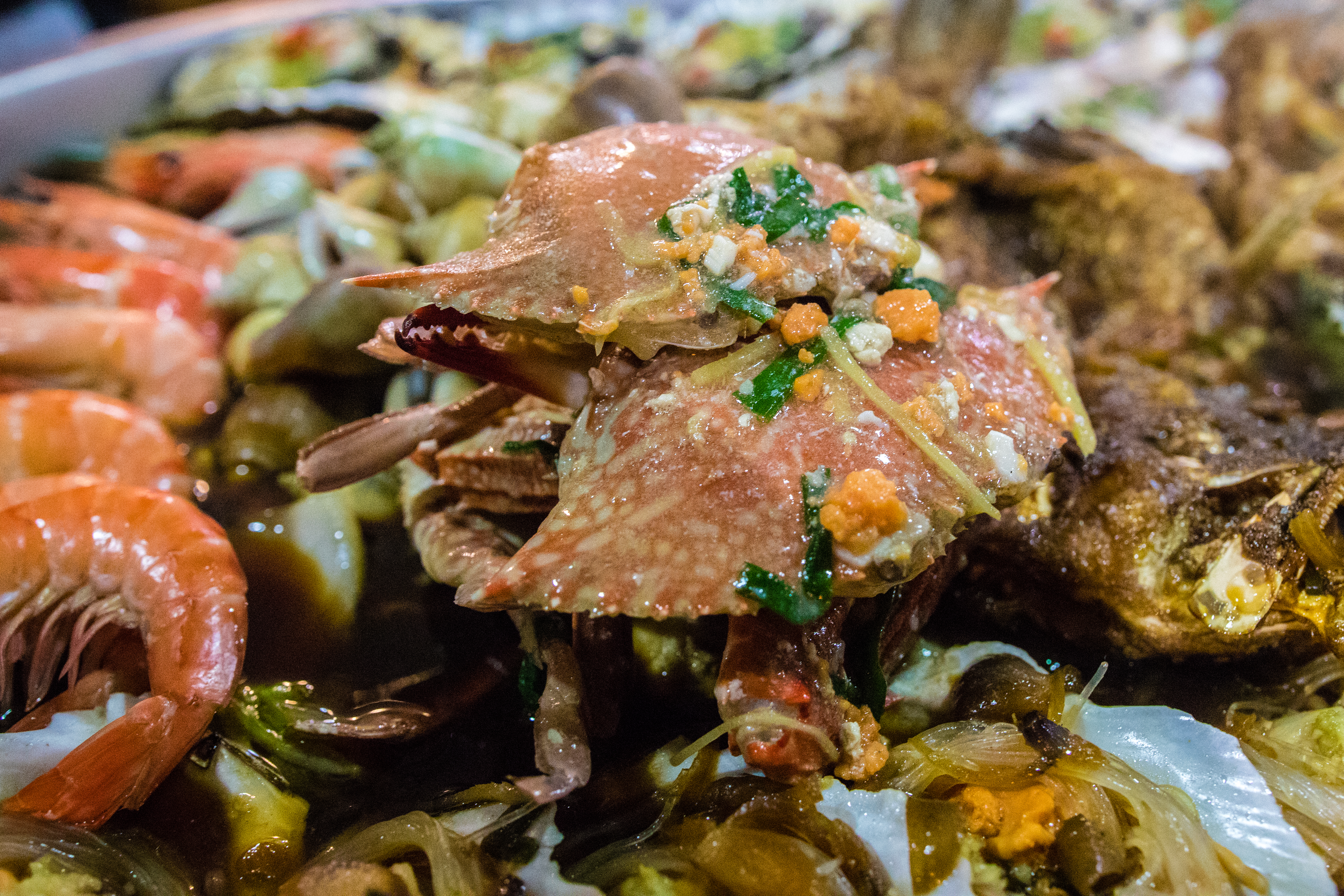 I was pretty impressed by the freshness of all the seafood, so I asked the owner where he sources them from. Turns out, the restaurant gets their fish delivered live twice a day and they head down to seafood markets every morning to buy the shellfish.

While I’m not one to believe every single claim a restaurant makes, the fact that my stomach didn’t go haywire at all after the meal makes me feel safe enough to return. 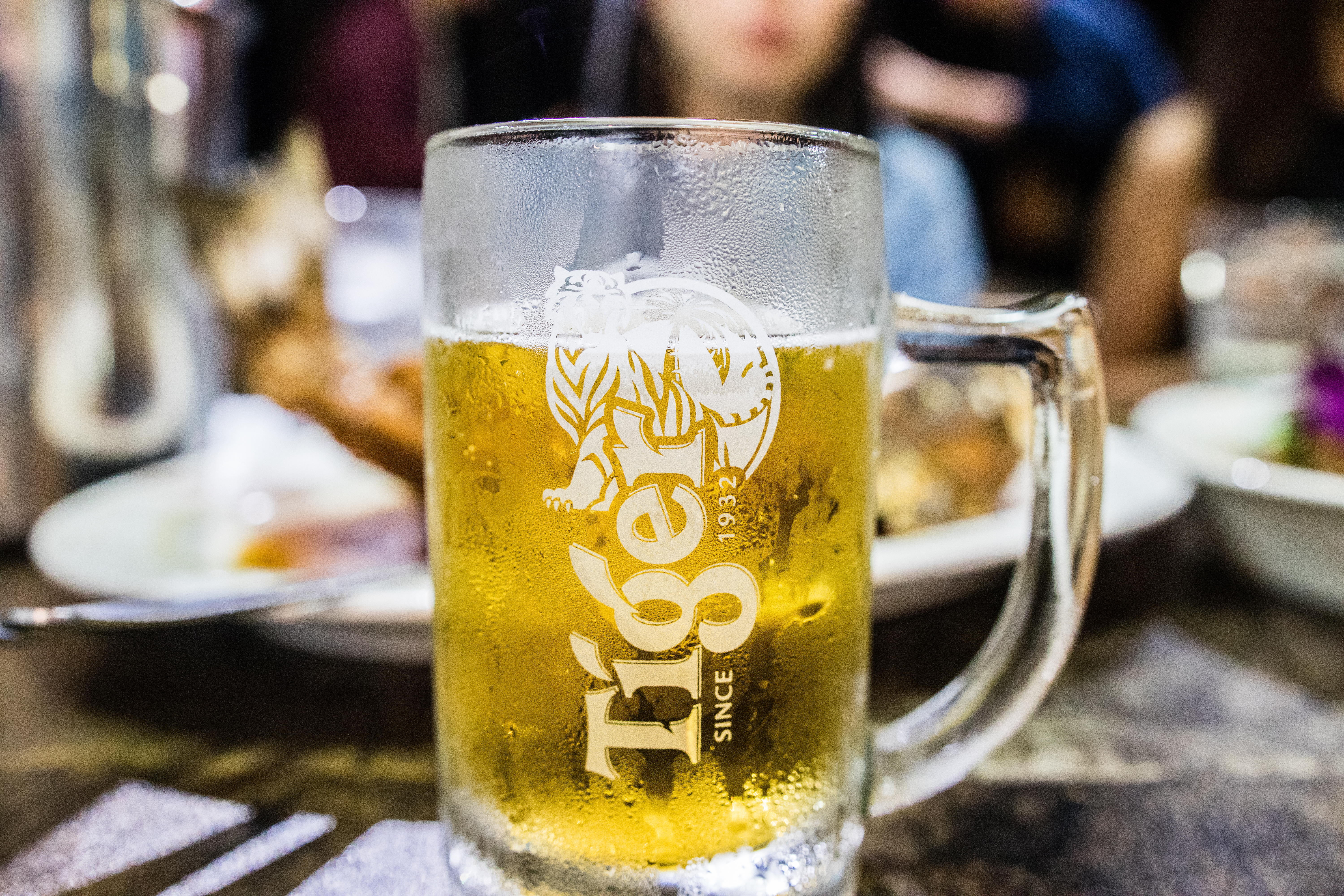 A feast like this usually comes with beer, and Eight Signatures knows this fact of life well.

They’re offering free-flow beer from now till 31 January 2018 after 9pm every day! There’s no minimum order required – you can literally walk in, order the cheapest item on their menu, and get unlimited mugs of the addictive golden liquid. 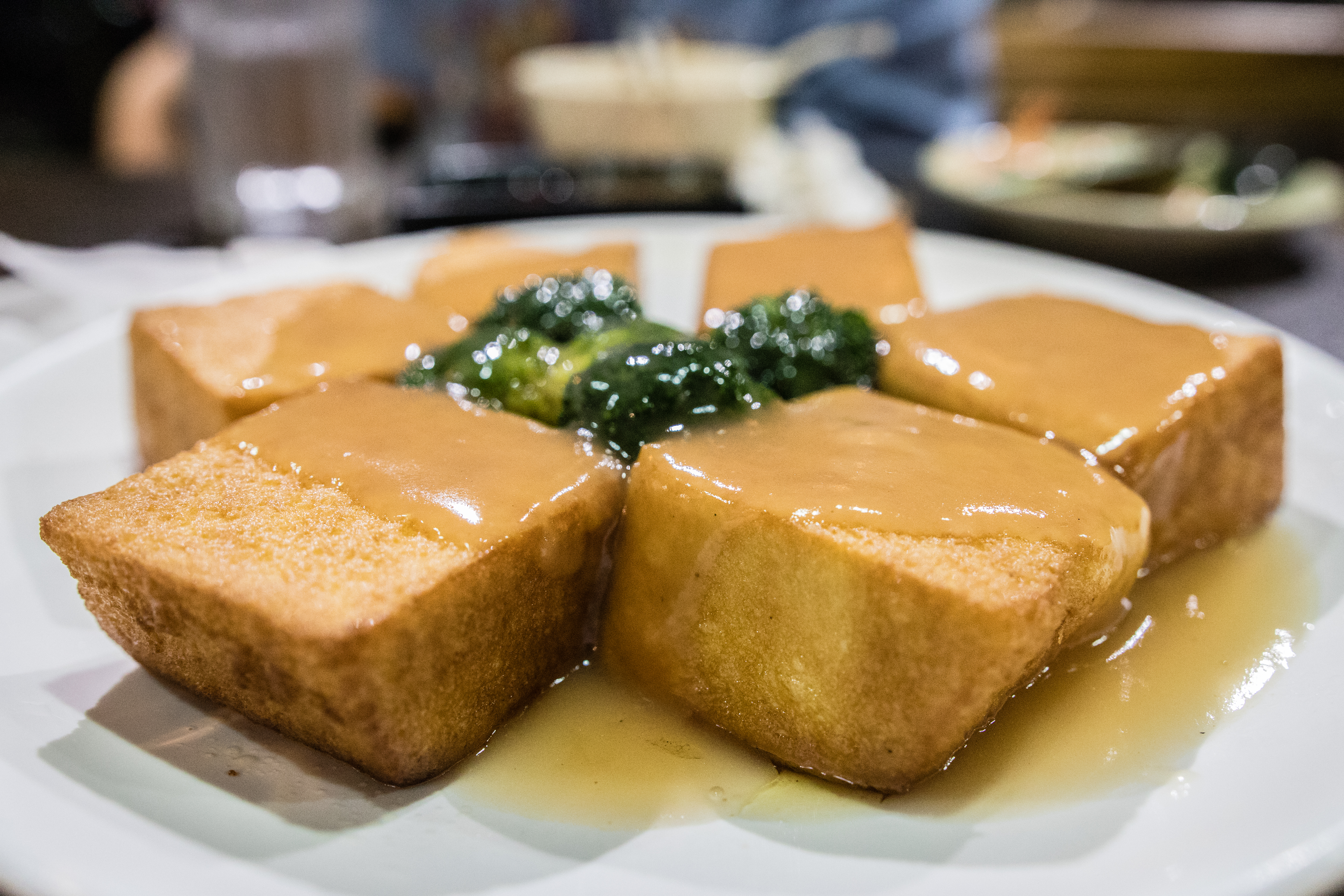 If seafood is not your thing, they also have a range of zi char dishes. The best dish I tried that night was their Fried Homemade Toufu Topped With Abalone Sauce ($12).

Yes, it sounds simple AF, but the tofu was so well-made that I had to put it on top of my list of must-tries here. Biting into the crisp skin of the tofu gives way to silky smooth bean curd that almost melts in your mouth. The tofu was way more eggy than regular store-bought ones, and it had a very slight sweetness and a texture that reminded me of Lao Ban’s tauhuay.

Together with the creamy abalone sauce, this is one dish I’d definitely order if I return. 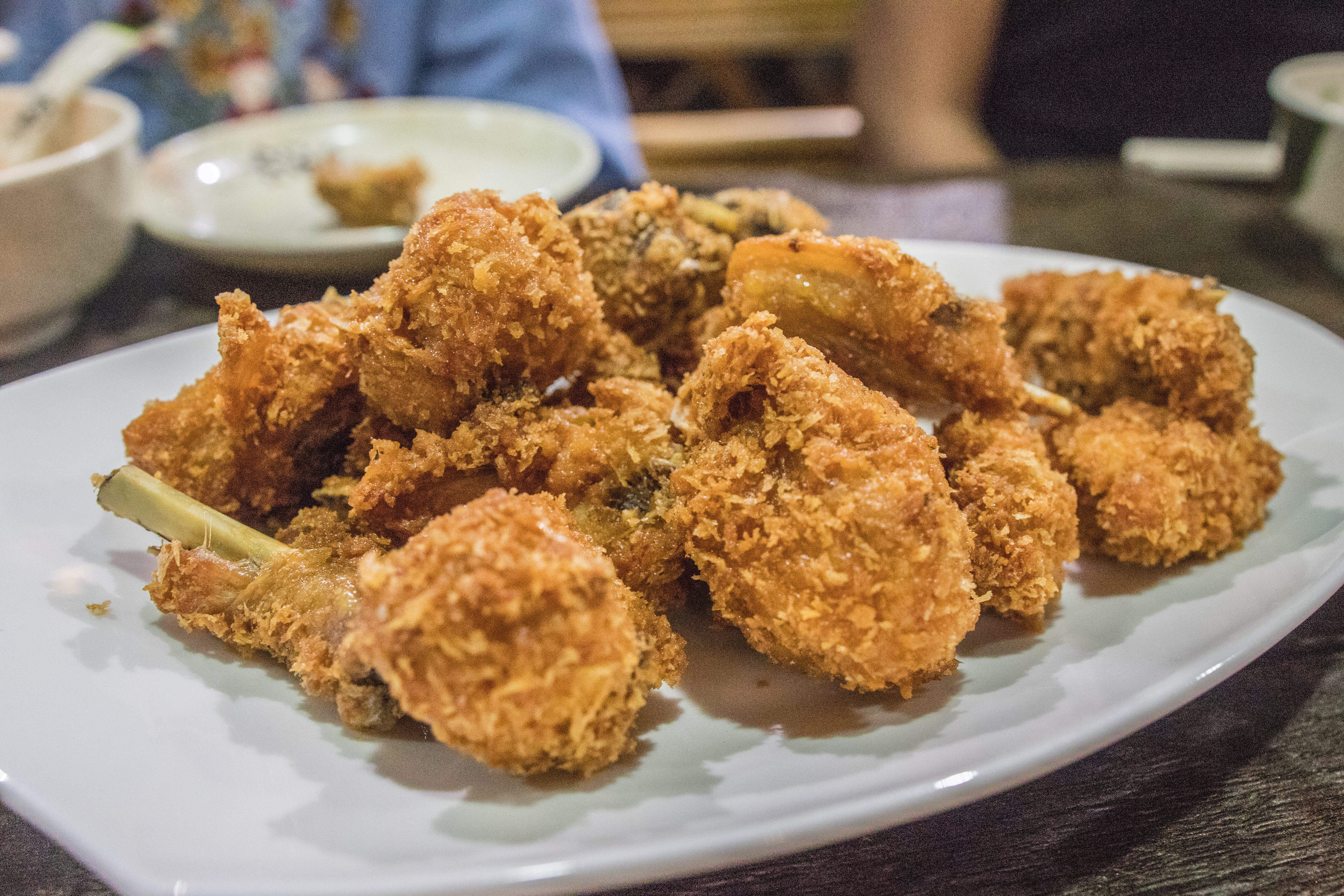 A dish most would love is their Signature Truffle Chicken ($22). I was expecting a strong waft of truffle aroma to hit me when this was served, but there was none, so I didn’t have high hopes for its taste.

Once I bit into a piece though, everything changed. The chicken was so well-fried that the skin was incredibly crispy whereas its juicy flesh was brimming with the fragrance of truffle oil. Turns out that the chicken was marinated with black truffle oil, instead of just being fried with it. 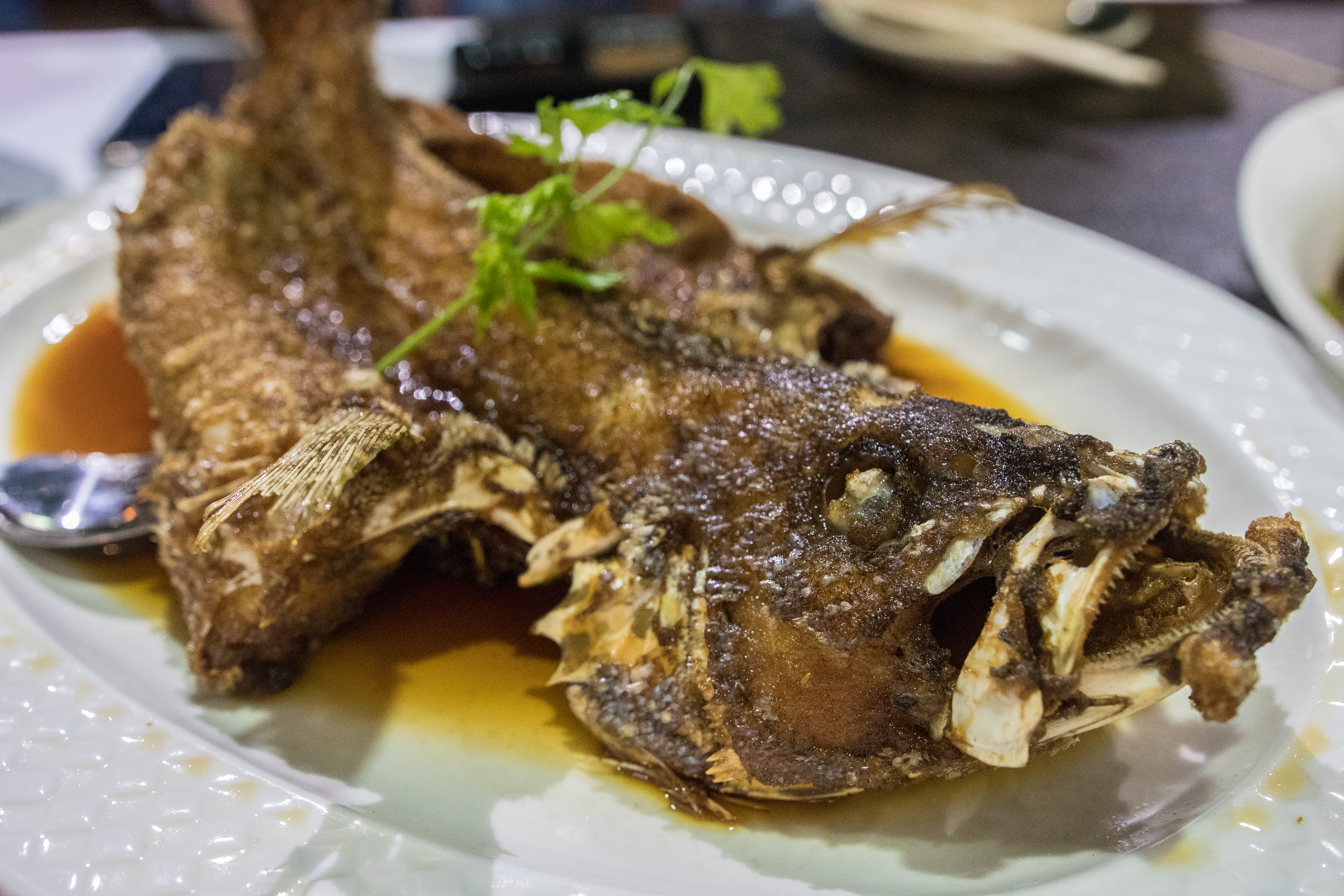 If you’re not getting the Eight Signatures platter, be sure to order their Deep-Fried Marbled Goby ($48). It may look like an unassuming plate of fried fish, similar to that at Thai zi char places, but this really makes an impression.

Made with live fish, which is killed in their kitchen, the crispy skin hides white flesh so soft it disintegrates in your mouth without you chewing. The fish is served atop a simple pool of soya sauce, which complements the dish by letting the flavour of the fish shine. 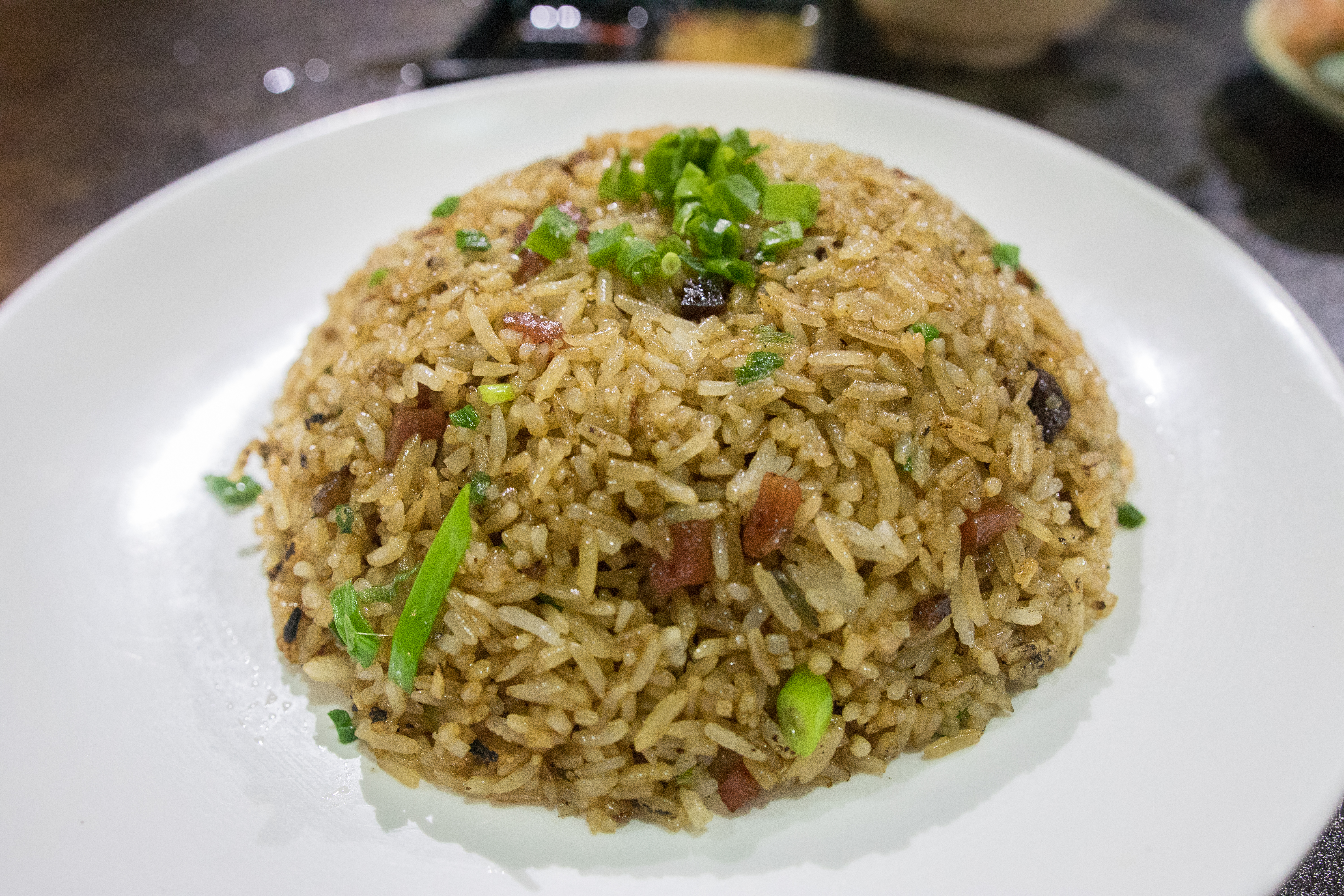 We also tried their Fried Rice with Preserved Meat ($8), which was filled with wok hei, but slightly too salty for my liking. 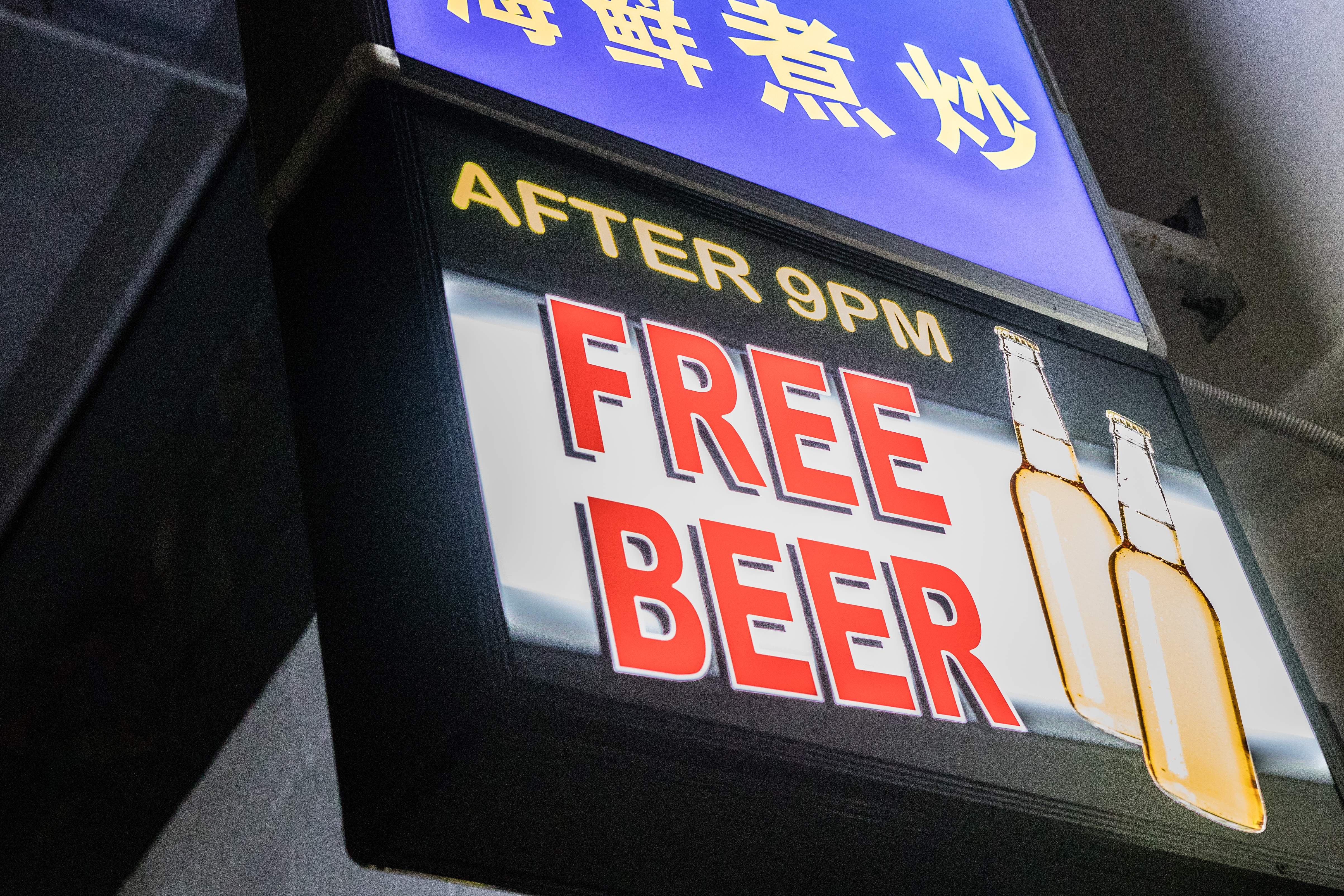 Some of the dishes here, such as the Signature Truffle Chicken and fried rice, leaned towards the salty side, but would probably get the favour of those who like strongly flavoured food.

This was a media tasting at Eight Signatures Seafood Restaurant 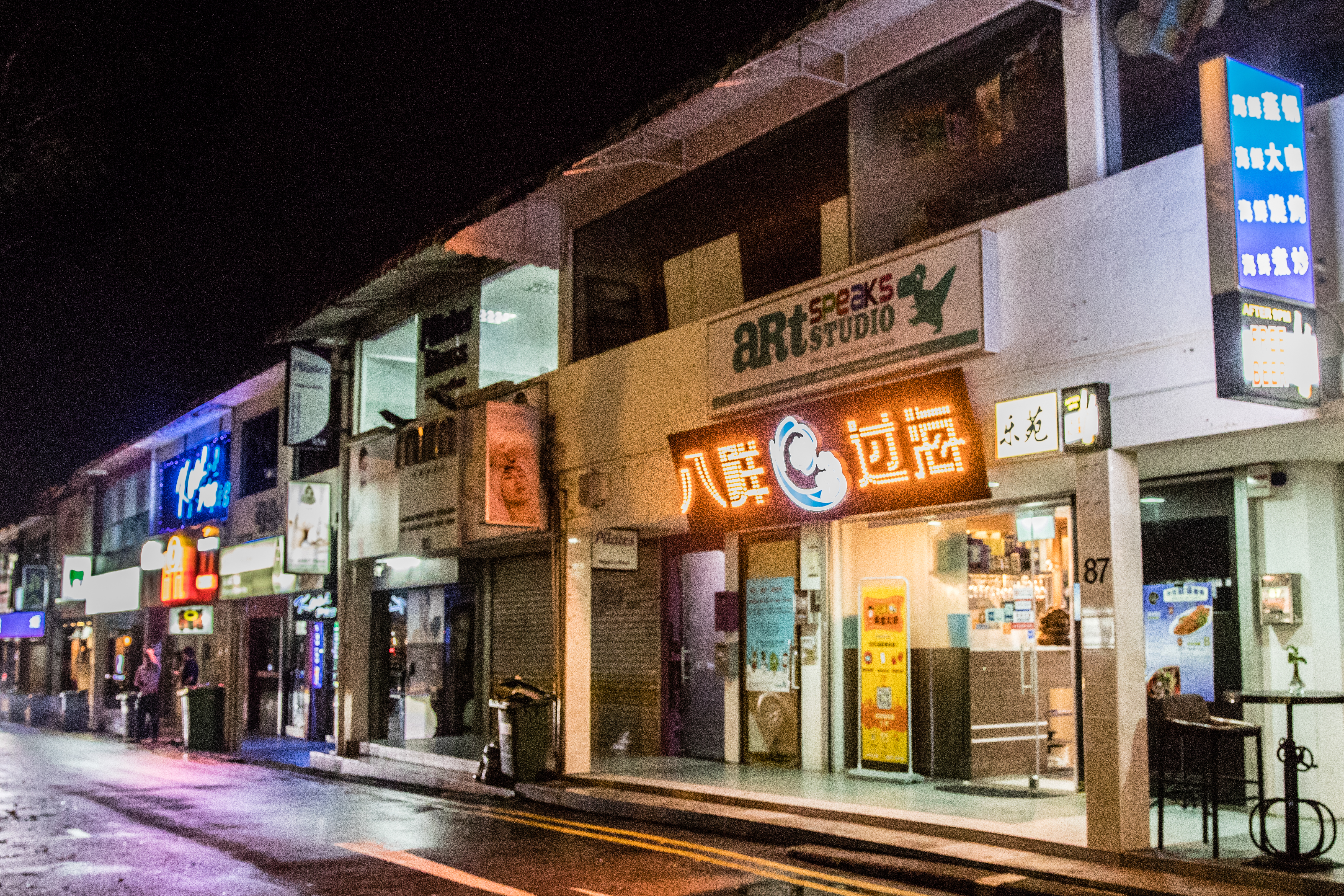 PSA: Quote ‘Eight’ or ‘八‘ and like the Facebook page of Eight Signatures Seafood Restaurant to get 10% off your total bill.