Out Of The Closet: Joyce & Qiuling Share Their Story

Meet Joyce Chan and Lim Qiuling, a lesbian couple who got married in Singapore with the full support of their family and friends.

2020 has not been the best year. And I’m not just referring to the global pandemic that is currently wreaking havoc around the world.

Negative headlines have been aplenty lately. From sex scandals to influencer drama, it seems like each new week births a new scandal.

In light of all the negativity currently plaguing the virtual sphere, I thought now would be a good time to share an uplifting coming out story. 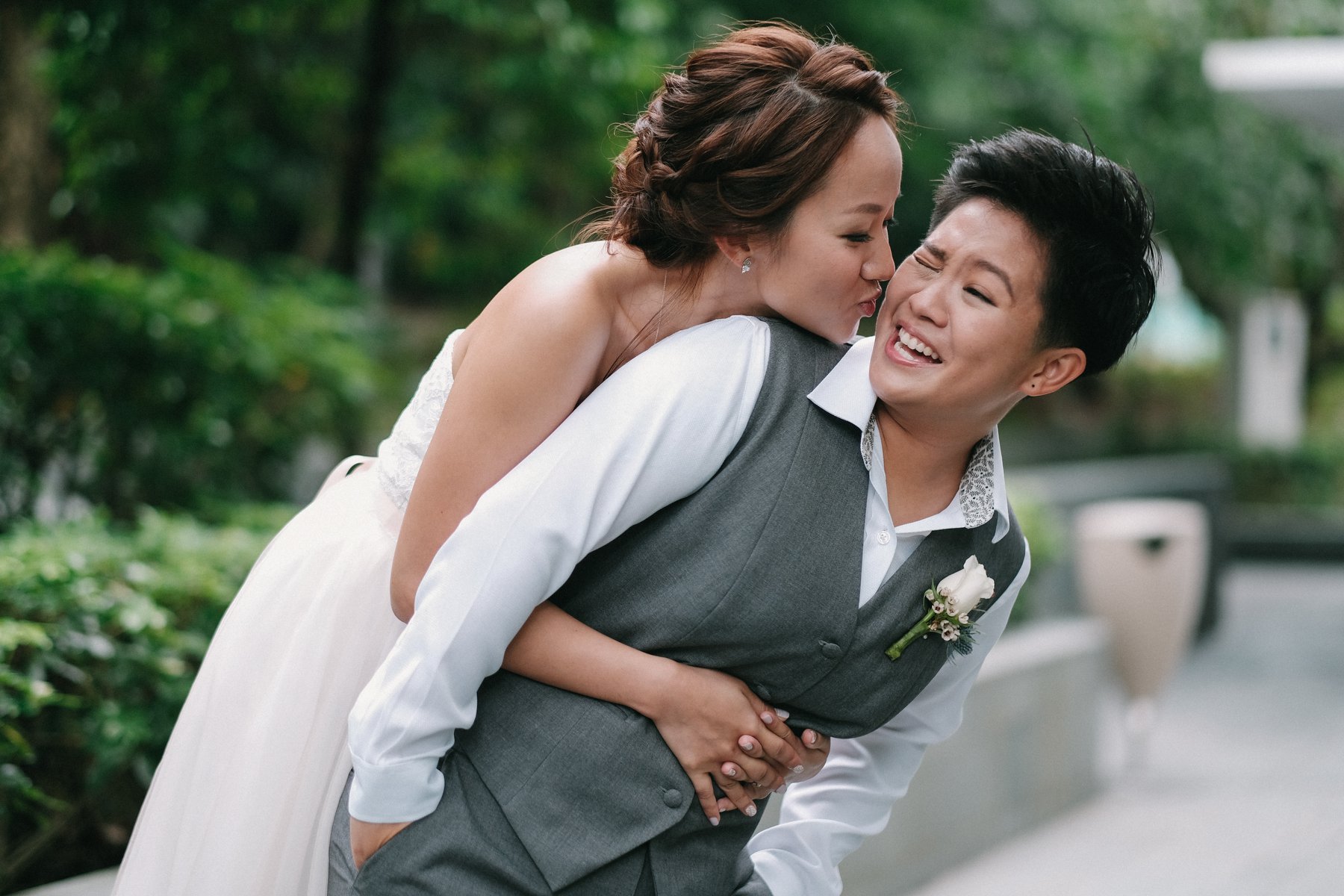 Meet Joyce Chan and Lim Qiuling, a married Singaporean couple together for 11 years and counting!

Joyce and Qiuling first caught my attention when Joyce penned a heartfelt post on Facebook during Pride Month 2020. Her post detailing her relationship with Qiuling quickly went viral, garnering thousands of likes and shares in a matter of weeks.

Married for the past 2 years, it’s not hard to see why their relationship inspired so many. We still live in a society where same-sex marriages and familial acceptance are an anomaly. So while their marriage may not be legally recognised in Singapore, the fact that it was attended by their friends and family shows that their union is very much acknowledged by their loved ones.

So it’s little wonder why their Facebook post managed to inspire so many. It’s not everyday that you see a same-sex couple get married in Singapore. 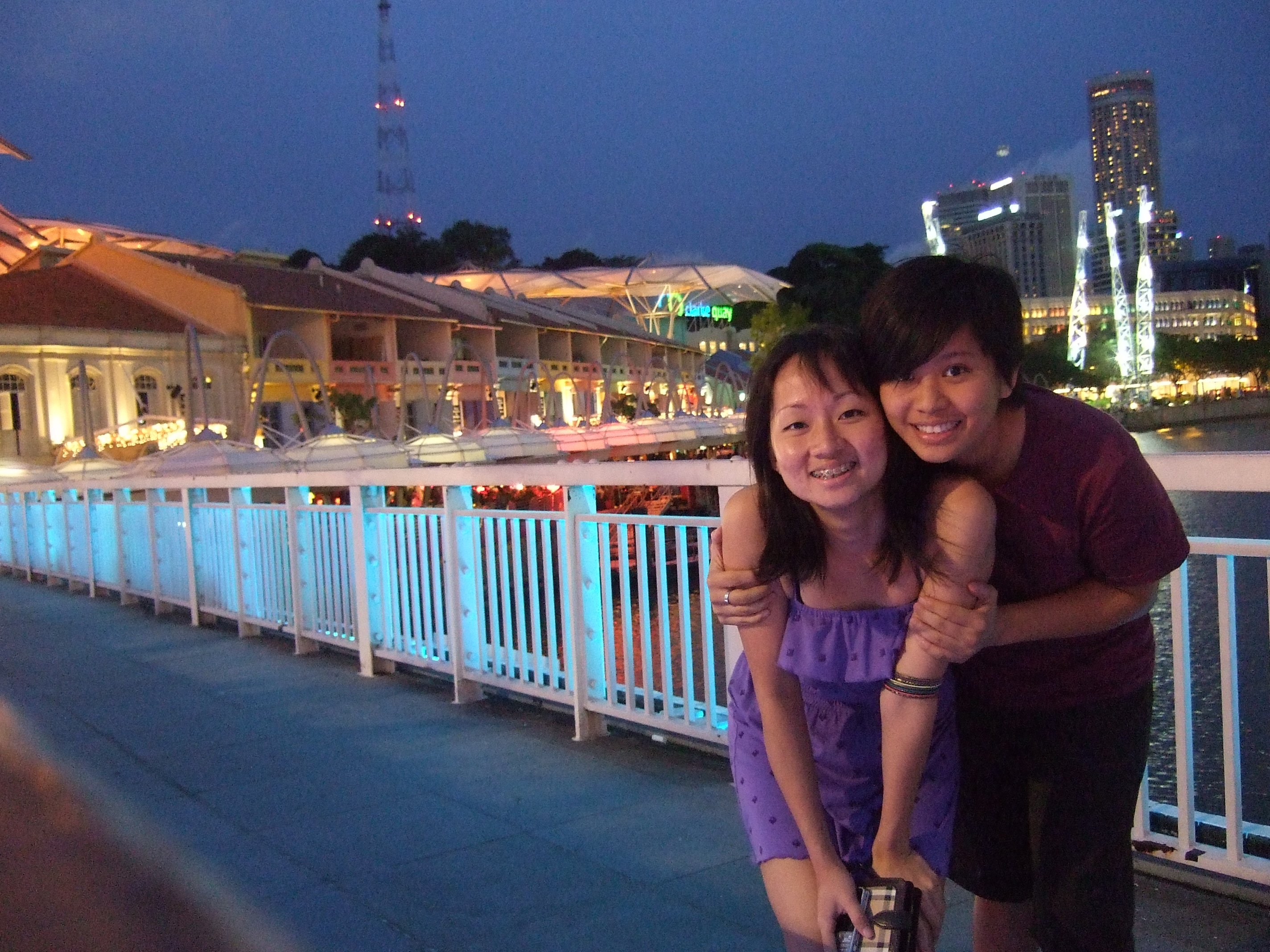 Joyce and Qiuling met while studying at Singapore Management University.

When they first got acquainted through an organising committee for a blood donation drive, they didn’t have a favourable impression of one another. As Joyce recalls,

Qiuling thought that I was arrogant because I was only speaking to people with whom I had worked with. The truth is that I am a huge introvert so I only stuck with people whom I knew beforehand.

I recall friends telling me that she clubbed quite a lot.

Eventually, Joyce and Qiuling warmed up to one another after getting to know the other party better. Joyce even worked up the courage to confess to Qiuling over the phone, though it didn’t go quite as planned.

My confession to Qiuling was a disaster. Prior to that, I had never confessed to any girl before. The conversation lasted less than a minute and it went something like,

That conversation probably scarred me for life.

They met up subsequently, where Qiuling proceeded to reject Joyce in person. 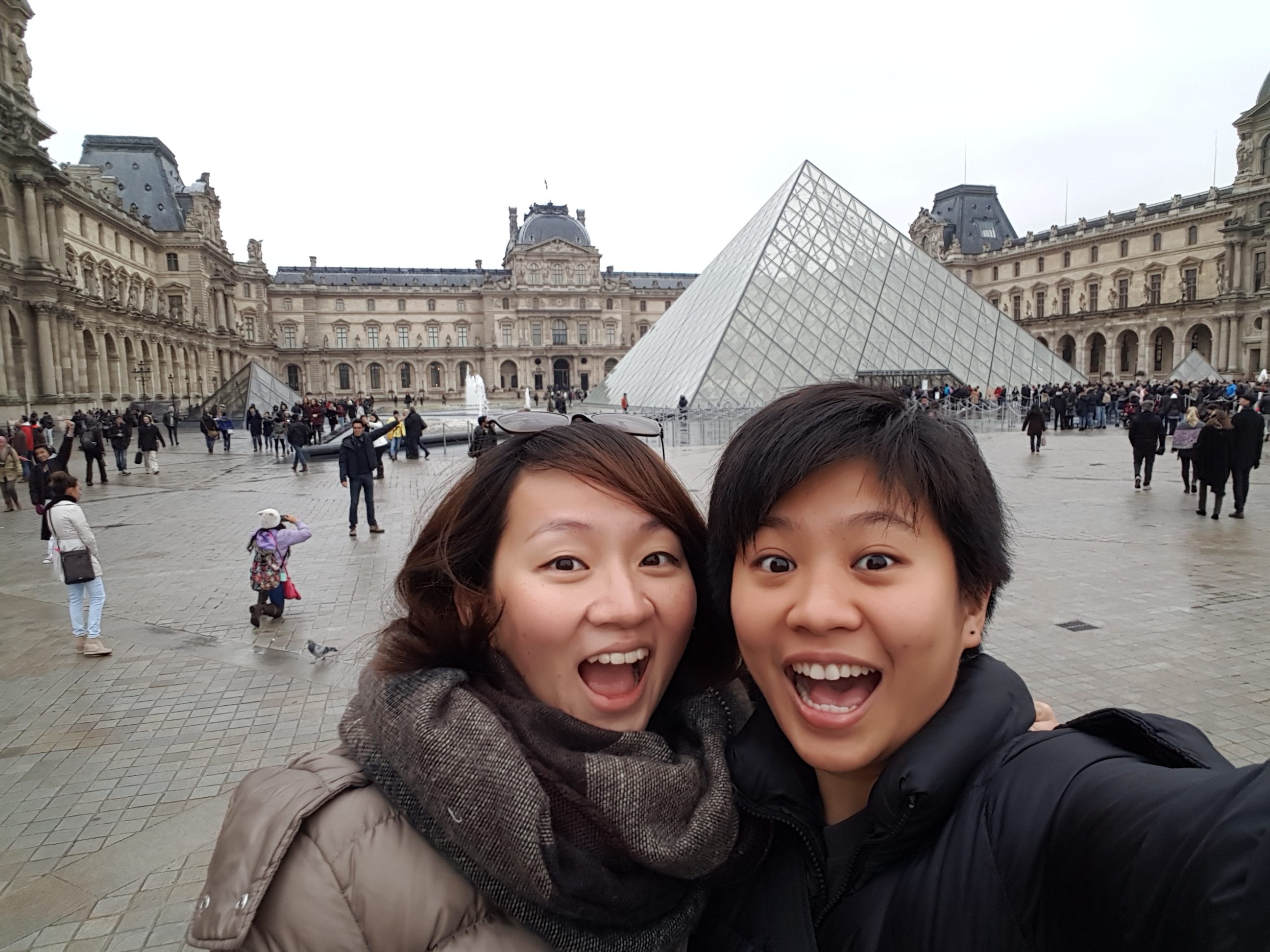 Despite the rejection, they continued to stay friends. The turning point came when they decided to holiday in Hong Kong together.

After an entire day of visiting museums, she asked if she could hug me. We hugged and later that night, she said, “Let’s give this relationship a try.”

We made a childish bet against ourselves that “this” would last no more than 3 months. 11 years later, we’re still betting on silly things and losing money to each other.

After 7 years of courtship, Joyce decided to propose to Qiuling in 2016. As Qiuling complained that Joyce was ‘boring and unromantic’, Joyce was determined to surprise Qiuling by planning a romantic proposal.

Joyce booked a staycation for the proposal. She then convinced Qiuling to explore the nearby mall, while her family and friends frantically decorated the hotel room during the couple’s absence.

It was an intricate set-up with a heartwarming self-made video, lots of balloons, a beautiful bouquet of roses, huge cardboards to proclaim my love to her and a sequence that our guests had to follow.

Once she opened the door to the hotel room, everything was set to action.

Our collective memories of the proposal was her crying, my awkwardness around so many people and the love from our beloved family and friends.

Joyce & Qiuling: Getting Married In Singapore 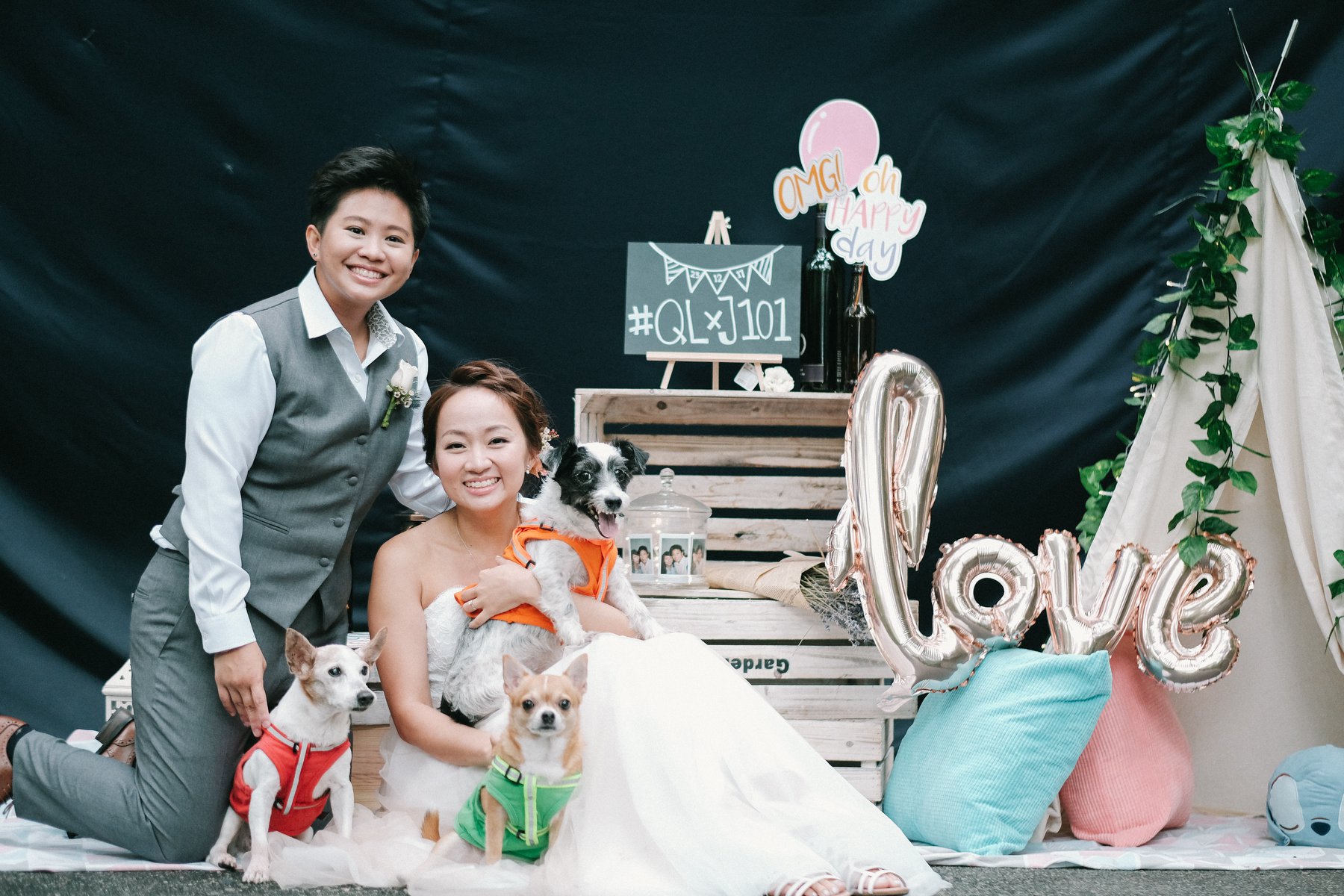 As Joyce and Qiuling deliberately kept their wedding celebration intimate, they had ample opportunity to mingle with all of their guests.

I remember being so happy throughout our wedding.

We went to each table and interacted with all our guests in a free and easy manner. It was a simple wedding, but it was the wedding that we dreamt of.

When I quiz Joyce on what her favourite part of the wedding was, she replied,

If I had to absolutely pick a favourite part, I would say that it would be my wife’s vows.

When we first dated, I knew that I wanted to spend the rest of my life with her. Back then, I did not believe that it was possible. I thought that life and its obstacles will get in our way somehow.

So when I stood there listening to her vows, I was overwhelmed with love and gratitude, that somehow, we managed to overcome all those obstacles to stand in front of our loved ones on our special day. 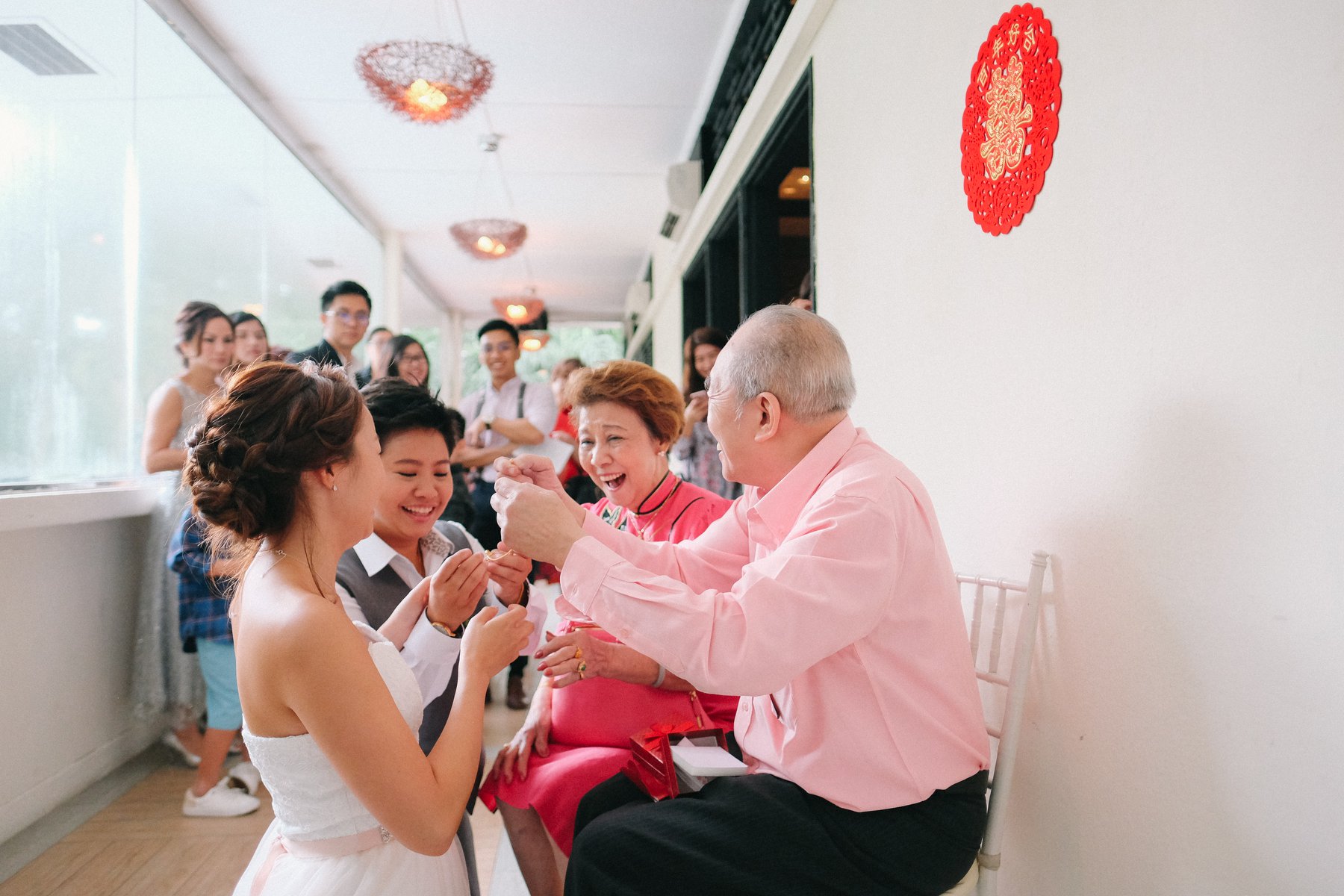 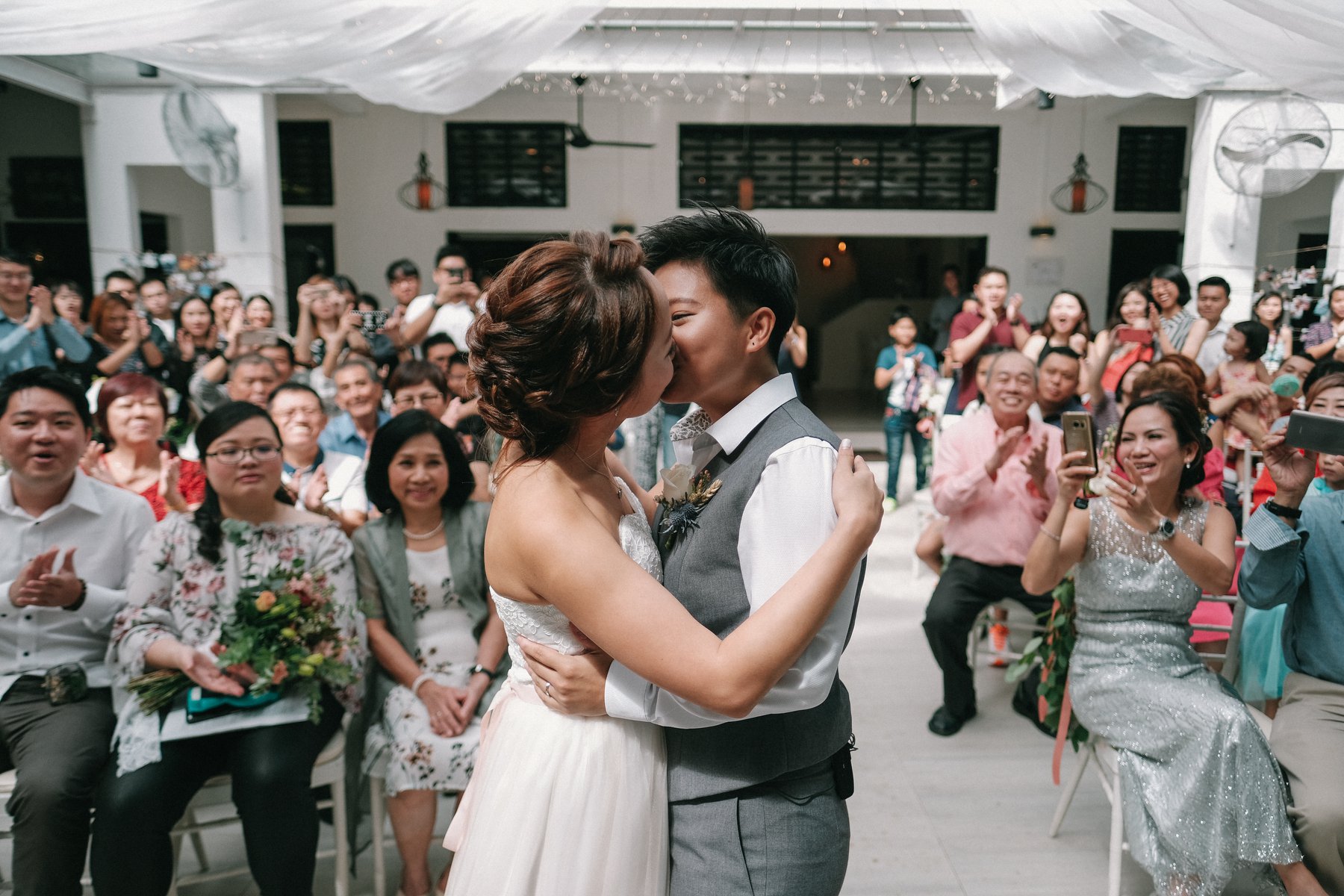 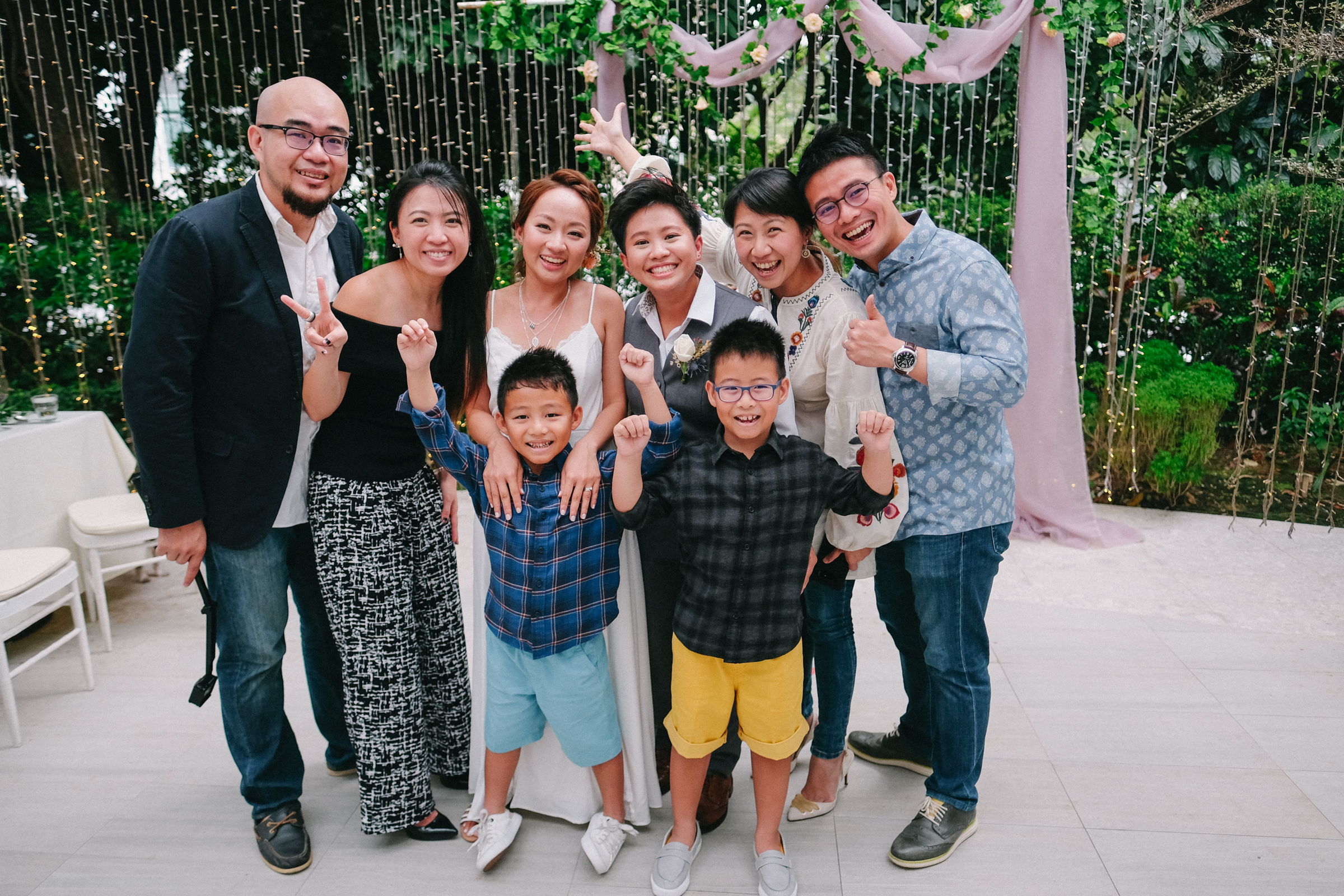 Why Joyce & Qiuling’s Story Is Important

I generally wouldn’t cover a story if I had already written a coming out story with a similar angle. But I made an exception for Joyce and Qiuling. Because I think it’s important that as many people know about their story as possible.

One of the biggest obstacles to familial acceptance of LGBTQ+ people in Asia is the fear of what others would think. In 2018, I interviewed a mother who was terrified of her friends finding out that her son was gay.

My generation is still very conservative. If they ever find out my son is gay, they will look at him like a freak.

I get very nervous whenever my friends ask me why my son still got no girlfriend.

Her predicament is not an unusual one. Even when parents finally accept their child’s sexuality, the pressure often remains on the child to not out themselves unnecessarily. Even Joyce and Qiuling took some time before their families came around.

Joyce: It took my parents some time to come to terms with it. I came out to both sets of my grandparents as well and both of my grandmothers cried (in separate settings). They cried because they knew that life would be tougher for me in Singapore.

One of my grandmas said in Mandarin, “Don’t worry, Ah Ma will support you.”

With my parents’ and grandparents’ advocacy over the years by introducing Qiuling as my partner to all my extended family members, it eventually became much
easier for us with my family.

While Joyce did face some difficulties in gaining acceptance from her family, Qiuling had a much harder time.

Her parents objected to our relationship and always saw me as “just a friend”.

Eventually, I got my dad to speak to Qiuling’s parents to ask for their permission to take Qiuling’s hand in marriage. It took a while, but her parents eventually gave us their blessings for the proposal and marriage. 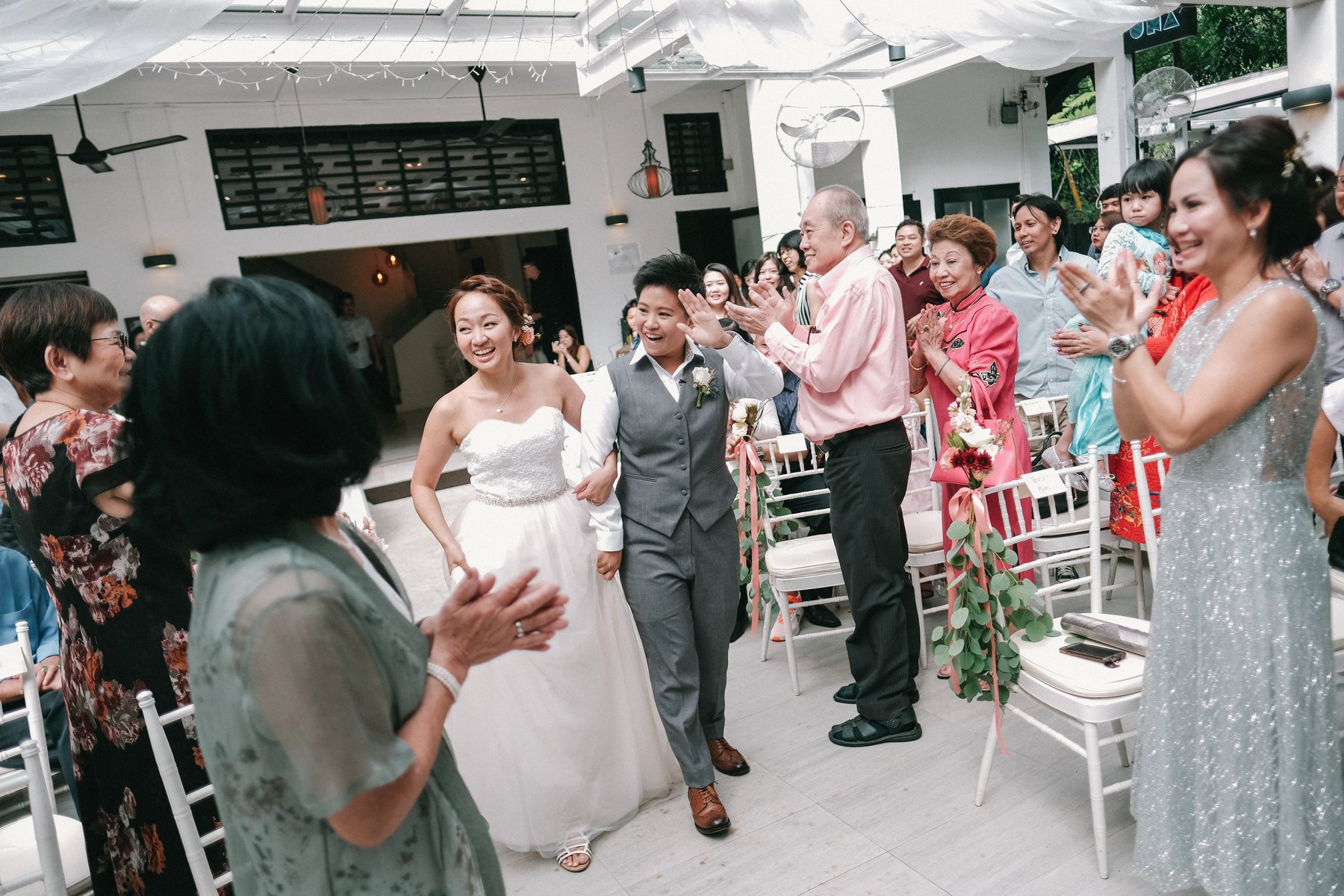 For a community striving so hard for acceptance, the hardest acceptance for many to receive is often from one’s family.

By sharing Joyce and Qiuling’s uplifting story of getting married in Singapore, I hope that it will show conservative Asian households that a same-sex relationship is nothing to be ashamed of.

Together with the feature on Gillyn and Jolyn, I hope that their collective stories will not only normalise same-sex relationships in Singapore. They will inspire same-sex couples to believe that throwing a wedding with the support of their family won’t seem like such a wishful desire anymore.

But more importantly, I hope that Joyce and Qiuling’s story will integrate into a much larger story of hope, love and acceptance. Because frankly, the world could use a lot more of that right now.

Once again, Dear Straight People would like to thank Joyce and Qiuling for sharing their story with us.

If you would like to keep up to date with how they are doing, you can connect with Joyce on Instagram via @joycechansg.