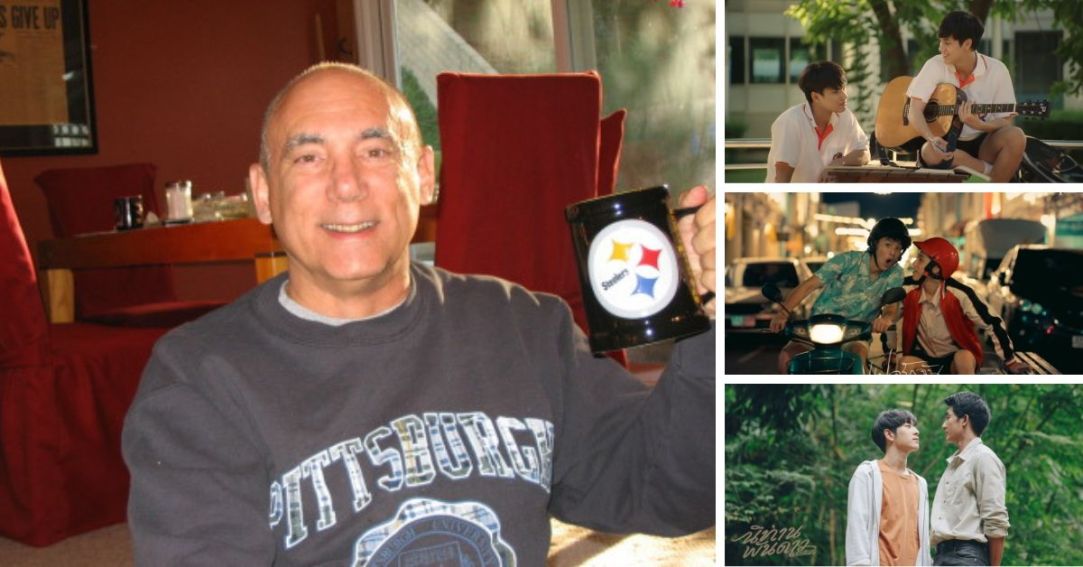 Not Your Typical BL Fan: How An Old White Man Fell In Love With BL

A mature white man shares the insightful story of how he fell in love with BL dramas, and what they mean to him.

When one thinks of BL fans, an image of hormonal adolescent girls typically comes to mind.

As an older white man, I am sure some of you may think that my love of watching incredibly good-looking guys in shows aimed at teenage girls is warped.

But before you make a snap judgement, hear me out first.

My name is Peter Bongiovanni and I’m the proud owner of BL Bliss, an independent blog run by me where I post content related to the wonderful world of BL.

For the uninitiated, BL stands for Boys Love. BL works typically chronicle homoerotic relationships between its male leads in a schoolyard setting.

However, the scope of what qualifies as a BL drama has expanded in recent years. BL has grown to become an umbrella term for any Asian drama centering on a gay love story.

My Growing Up Years

My love for BL can be traced back to my childhood.

I was born in a small western Pennsylvania town in the United States. It was a coal-mining, steel-making city. Believe it or not, I was once a labourer in the steel mills!

My hometown was an earthy city with ‘family-values’ galore. Only those family values did not include me. I NEVER fit in.

I was a skinny kid, nearly blind, bullied, effeminate, uncoordinated, clumsy, withdrawn and depressed. Oh, and I loved boys!

Despite my same-sex attraction, I could not articulate the fact that I was gay until I was in my 30s. It was a very different time back then. I was overwhelmed with guilt as the Catholic in me along with the conservative family values controlled my life.

I was a sad, lonely kid who was never the ‘apple of anyone’s eye’. I longed to escape. So, I went to school. And got lots of degrees. Four of them as a matter of fact.

As cliche as it sounds, things did get better.

I met someone in my 30’s, who became my ticket out of the lonely mess that was my life. We proceeded to move to the great state of California.

I’m not exaggerating when I say that California saved my life. California gave me hope and permitted me to explore my sexuality.

We lasted 15 years together; not all of which were pleasant. I still had a hard time recognizing myself as gay. I continued to feel shame, residual guilt, and a sense of unworthiness. I never felt “normal’.

Slowly, like a gently moving freight train, I dealt with my issues, one by one and eventually found the love of my life. He and I have now been together for 21 years and married for 9 of those years. He is my joy, my comfort, and my rock.

Discovering The World Of BL

When the pandemic hit, I coveted to do something ‘gay’ for a change out of sheer boredom.

I chanced upon a YouTube video titled ’The 10 best BL series of 2020’. Back then, I had no idea what BL was. Out of curiosity, I clicked play on the video.

It didn’t take long for me to become hooked. The world of BL became an obsession for me. It made me feel alive again. For the first time in a long time, I began to relate to others in a gay way on an emotional and psychological level. It actually felt good to be gay!

Watching these BL characters brought back so many memories of what I was feeling when I was younger, but was never given the opportunity to display those feelings. Best of all, BL dramas made it all seem so normal!

In a strange and ironic way, these series made me feel not so alone anymore. It stopped me from wallowing in the guilt that I was consumed by during my younger years. I realised that the feelings that I had during my teenage years were not all that uncommon.

Others felt as I did. I could see that now.

You must understand that in my younger days, I had no one to talk to about what I was feeling about guys, let alone act on anything.

These BL productions helped me feel good vicariously again. I could now relive my younger days, but with a new understanding and a smile on my face.

In a way, I gave myself permission to go back and relive my younger days in a fantasy world where I could lust, love, and live. I ‘feel’ these series when I watch them. When they hurt, I hurt. When they lust, I lust. When they love, I love too. Many have affected me very deeply and profoundly. Sometimes with pleasure; other times with anguish.

Perhaps that is simply unique to me (or my generation) since I was unable, even in fantasy, to live the life these stories create and foretell.

Stimulated by my love for BL dramas, my creative juices started flowing again.

I began to write reviews about them. At first, just for my own amusement. But then I realised what they were doing to and for me. They made me feel alive again and gave me a purpose.

I joined Twitter to post my reviews.  And some people actually liked them! Honestly, I never thought anyone would be remotely interested in the ramblings of an old man. But I’m grateful for them and for all those who “follow” me. That pleases me immeasurably.

My foray into BL content creation enabled me to meet other like-minded people. This may surprise some of you. But there are many ‘mature’ men who watch these series with as much fervour as I do. They do not say that too loudly for fear of judgement. But they exist.

I happen to be one who is neither ashamed, embarrassed, or afraid to say so. BL works have helped me to relive long forgotten feelings and emotions and to face those feelings with a sense of closure. And occasionally, forgiveness.

Running BL Bliss has given me a sense of purpose. It allowed me to connect with the legions of BL fans around the world.

I am guessing one of the reasons I continue to do this is because of posterity. I am hoping that in the future, someone will discover the incoherent ramblings of this old man, and perhaps find it interesting, informative or even entertaining. It would be an absolute honour if I get quoted one day!

In my declining and limited time left, I finally feel a sense of contentment. Most importantly, I feel loved and no longer alone.

Check out Peter’s BL drama reviews at BL Bliss. You can also contact Peter directly via email at ppbongi@blbliss.com