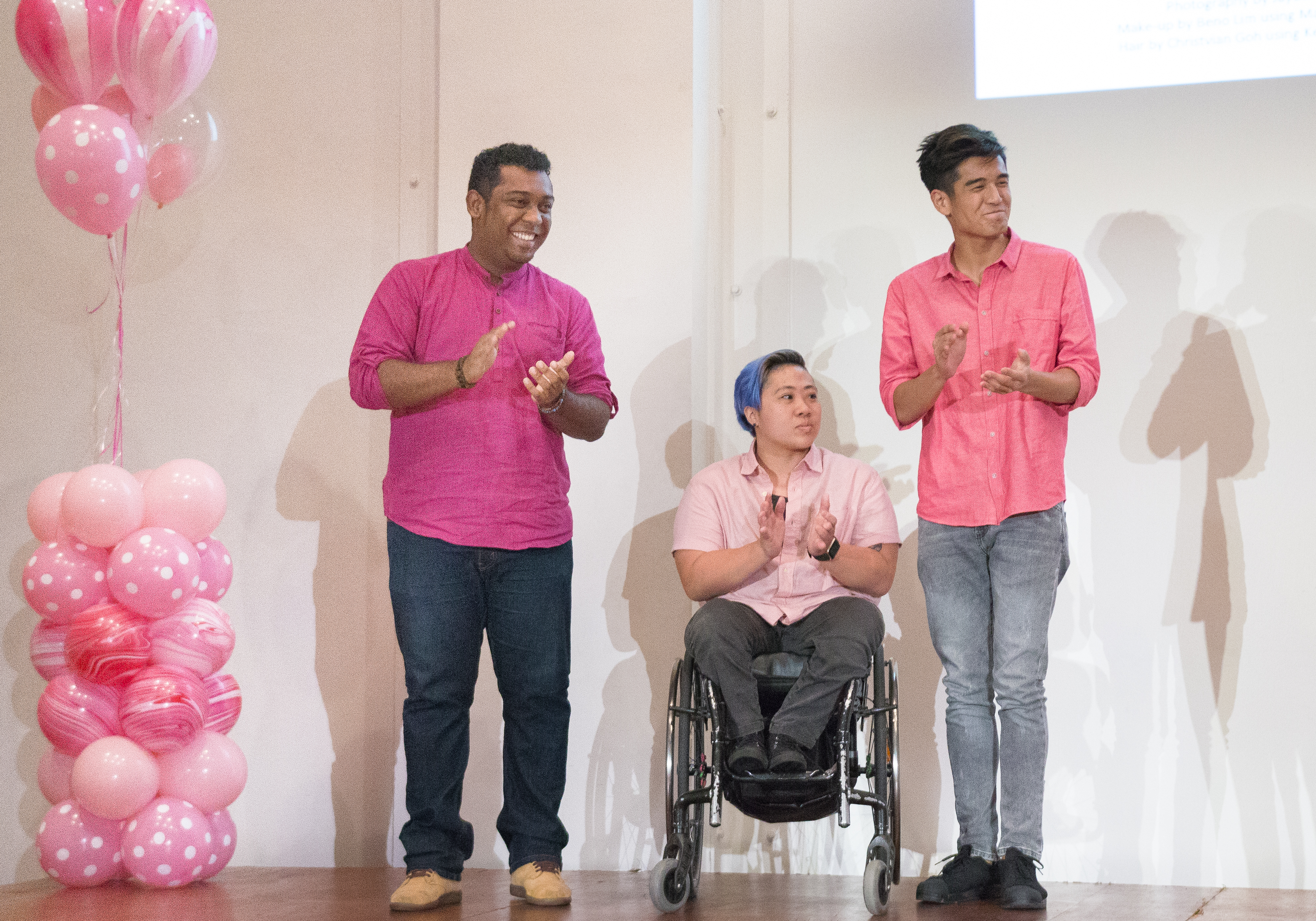 In light of the politically charged climate of 2017, it’s safe to say that more attention than ever will be heaped on the Pink Dot ambassadors this year. So it’s highly commendable that singer Nathan Hartono, para-swimmer Theresa Goh and actor Ebi Shankara have stepped up to take on the role of Pink Dot 2017 ambassador.

At the Pink Dot Launch Event held at 72-13 last night, the trio gamely fielded questions from journalists at a private media Q&A session. Here are the highlights from last night’s media interview:

1. Could you just talk about your personal motivations for becoming a Pink Dot ambassador?

Theresa: Opportunities like these are not easy to get and I want to be a representation of something that I would have liked to see when I was younger.

Ebi: From my teenage years, I’ve always had friends with various backgrounds and inclinations. I have been one who believe in accepting people for who they are and not putting labels and stereotypes.

So I guess naturally, I always wanted to champion this cause that everybody should have a right to be who they are.

Nathan: Recently, there has been a lot more attention on myself because of recent developments from all age groups. I think it’s so important to use that attention in the right way and not to just further yourself.

2. When was the first time you heard about Pink Dot and what were your feelings when you were first approached to be an ambassador?

Theresa: I’ve heard about Pink Dot from the first Pink Dot (in 2009) and I’ve been going since.

I was asked last year and I was very happy to say yes.

Ebi: I knew about Pink Dot from the first Pink Dot because I’m a theatre practitioner and word was getting around. I’ve always wanted to attend Pink Dot but I always had to work on that day.

So this year, I actually made it a point to go to Pink Dot before I was even appointed as an ambassador so when I received the call, I was like wow. Now I gotta show up!

Nathan: I have heard about Pink Dot from its inception but I’ve always had something else on the day – college, Army things, some show to do etc.

So my first Pink Dot was actually last year when I performed with Hirzi. That day really left an indelible impression in my mind. Everybody just felt so ‘un-judged’ and so happy and it definitely left an impression on me.

So the moment when they asked if I wanted to be an ambassador, it seemed like a really cool opportunity. To be able to be part of something so important, to lend a voice, it’s really an honour.

3. Recently, the event has been marred from the ban of foreigners. Talk us through that moment when you heard about it and if that affected your decision to join the ambassadorship?

Ebi: The announcement was made when we had all already made that decision (to become an ambassador).

I think that ruling was really a call to action. I think this is the year you really need to make your voices heard. To a certain extent, it’s almost a blessing in disguise.

Ebi: Sharing the same sentiments as Nathan, I believe that Singaporeans will come and show their support more so than ever.

But it’s sad that we couldn’t share this with foreign friends and marginalising them and making them outsiders.

Theresa: I think the first reaction was that it didn’t quite make sense. I think this is not the time for Singaporeans to be silent.

4. As an ambassador, what is your vision for Pink Dot?

Nathan: I think what Pink Dot has always set out to do, especially with the theme for this year, is to spark conversations.

Something this beautiful shouldn’t just be one day. I think people should show up and actually see the love and joy and the potential this city has.

Ebi: With dialogue and debate comes education for spectators who don’t wish to engage. And we have a lot of them here. So I think that is what Pink Dot is doing and I hope that is what they build upon in the years to come.

Theresa: You all said everything!

5. What advice would you give young people having conflicts with their parents to come to the event?

Theresa: Bring your parents to come!

Ebi: If they cannot see your point, bring them along. That is education – when they see it or experience it for themselves.

6. Given that you are all well-known personalities in Singapore, what if some of your fans disagree with you being an ambassador? Do you have anything to say to them?

Nathan: There’s definitely some backlash to be expected. That’s the internet. Everybody has an opinion. They are allowed to have it.

Personally, I’ve never been in the entertainment industry for the money or the numbers. It’s always been about where can I express myself.

I personally wouldn’t be comfortable knowing that I have fans who share viewpoints that are unmoving. My hope in getting involved is that people who had reservations before might give it a shot and show up. At most, if they don’t like it, just go home.

It’s definitely a thought that crossed my mind but… I truly don’t care.

Ebi: I think more than anything, it will push them to think in a certain direction.

They will start to think ‘why did he become an ambassador‘ and that will hopefully get them to become more inquisitive and make an effort in listening.

Theresa: Definitely one of my fears also – having people say rude stuff.

But I think in the end, I don’t care. It’s not for them to say what I can or cannot do.

Nathan: I think all 3 of us have put in a certain amount of work into becoming public figures and if you don’t use that very privileged position to do something important, then I think you are just abusing your position.

If you just use that position to earn money or get followers, then it’s a waste of a blessing.

7. Have you had to have a difficult conversation with someone in the lead up to accepting this ambassadorship?

Nathan: It’s something we don’t talk about a lot in our society so I’m expecting lots of interesting conversations about this.