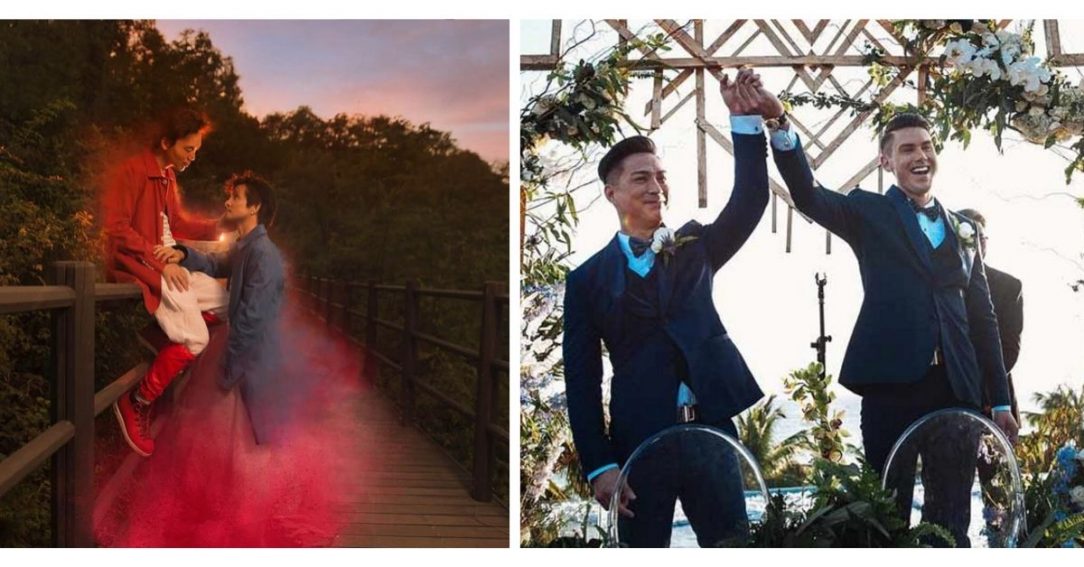 Some do it as a political statement. Others do it for love.

Regardless of their reasons, we hope their stories inspire you as much as it inspired us.

Despite the legal restrictions, same-sex couples from Japan to Myanmar and everywhere in between are professing their love and commitment to one another, even where the law says they can’t. Some do it as a political statement. Others do it because they just really want to be married.

Regardless of their reasons, these 8 couples have stood up to oppression and we hope their stories inspire you as much as it inspired us.

Sometimes, life is more like a romance novel than you might think. Famous wedding designer Francis Libiran met Christian Mark Jacobs at a cafe in Paris, sparking a love that spanned continents. After spending a year hopping between the Philippines and Singapore, the two got engaged at the same cafe where they first met.

Just because their wedding wasn’t officially recognised doesn’t mean it had to be a small affair. The couple threw a lavish bash in Boracay that anyone would be jealous of!  Their larger-than-life wedding boasted a picture-perfect venue and a star studded guest list including the likes of actress Kaye Abad and the ‘Bad Boy’ of Philippine cinema, Mr Robin Padilla.

To get married in South Korea, Kim Jho Gwang-soo and Kim Seung-hwan had to get creative. The two held their ceremony on a bridge between two districts, where neither claimed jurisdiction.

Getting married on a technicality wasn’t enough, so the two made a film. Gwang-soo used his LGBT film company, Rainbow Factory, to get their story out. The two are also going to court for recognition from the South Korean government.

In Myanmar, same-sex marriage isn’t just illegal, it’s criminal. But even though the law says no, Tin Ko Ko and Myo Min Htet went ahead and held their wedding in Yangon anyway. Their friends, family, and members of the LGBT community all attended.

It hasn’t been perfect — the couple risked public backlash and ten years in prison. But support from their loved ones encouraged them, and their bravery could set an example for other same-sex couples in Myanmar and across Asia.

“Will you stay with me forever?” That’s how Misato Kawasaki asked her girlfriend, Mayu Osaki, to marry her.

In a bid to challenge Japan’s marriage laws, the couple planned a tour to take wedding photos in 26 countries where marriage is legal in an attempt to shame the Japanese government. The tour sadly did not happen, due to funding issues. But, the two still made their cause known, thanks to widespread media coverage. 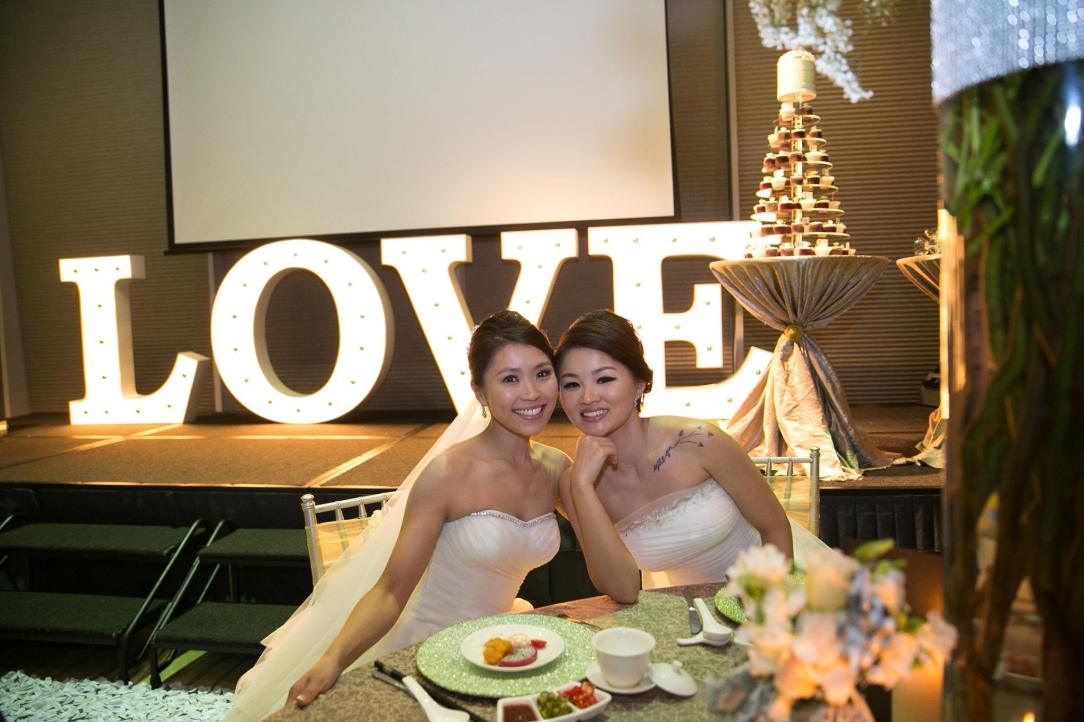 Regular readers of Dear Straight People are no stranger to Gillyn and Jolyn, who we featured in our most popular coming out story so far. Last year, this couple had a wedding at a Singapore hotel after six years of courtship.

Not only did Gillyn and Jolyn throw a traditional Chinese wedding ceremony, they did so with almost their entire extended family attending. This is almost unheard of in Singapore,  where familial acceptance of the LGBTQ+ community continues to be a widespread struggle.

Although their feature was published over a year ago, we continue to receive feedback from readers who cried happy tears after reading their extraordinary love story.

Although Taiwan was the first country in Asia to legalise same-sex marriage, the first officially recognised union comes from Ren and Yae of Japan. In 2015, Shibuya began granting same-sex couples with partnership certificates.

Ren and Yae were married during Tokyo’s Rainbow Pride celebration. What better way to mark the first recognised same-sex union than with a massive LGBT festival? The ceremony was sudden, but the couple celebrated their wedding with lots of others. They were the first, but they won’t be the last!

7. Teresa Xu and Li Tingting: Got Married After Political Imprisonment

Political statements are no mystery to Chinese activists Li Tingting and Teresa Xu. Li was imprisoned for her women’s rights campaigns and was not allowed to see her partner, because China did not recognize their relationship. After Li’s release, the two of them held an intimate ceremony at a restaurant in Beijing with their friends, showing it would take a lot more than jail to keep them apart.

This couple’s bold protest has us looking forward to a time when professions of love aren’t political. Until then, it’s people like Li Tingting and Teresa Xu who help make sure that oppression doesn’t go unnoticed.

8. Tom Tan and Oui Sumet Srimuang: Organised The ‘Gay Wedding Of The Century’ 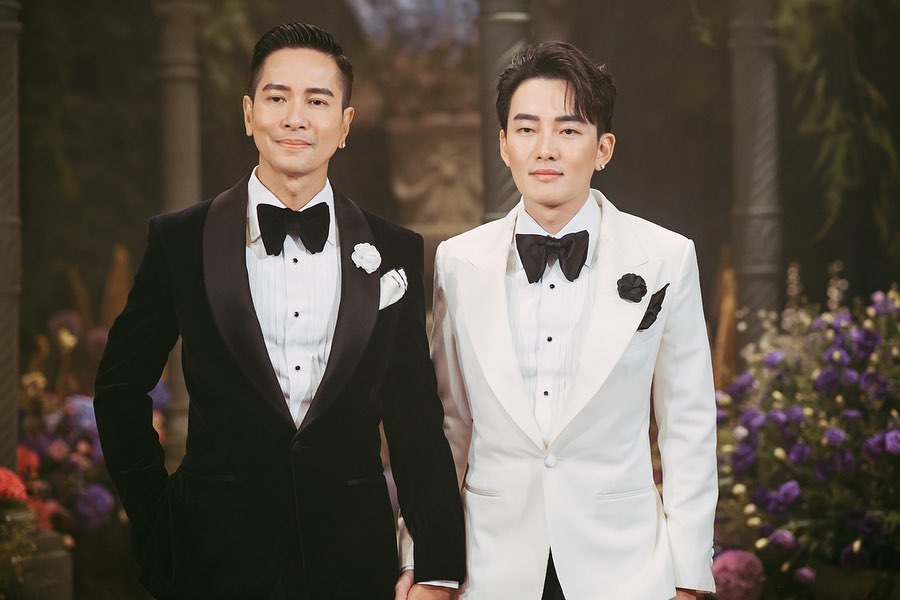 Tom Tan and Oui Sumet Srimaung, who are Singaporean and Thai respectively, are no strangers to the pages of Dear Straight People. Co-founders of Asia’s largest gay circuit festival, gCircuit, the prolific couple have been featured on Dear Straight People’s Out Of The Closet series.

On their 20th year together, Tom and Oui decided to get married in a traditional Thai engagement ceremony, followed by an all-out wedding bash that many have dubbed the ‘gay wedding of the century’. Although their wedding is not legally recognised in Thailand, it still inspired many judging from the response on social media. Their lavish wedding ceremony held over two days was dreamy in itself. But what was more inspiring is the fact that after 20 years, they are still madly in love with one another. If that doesn’t inspire you, I’m not sure what will.

As Tom himself puts it: ‘I hope our story and our wedding have touched, inspired or made you believe in love again.’

We Hope These Stories Inspire Your Jaded Heart 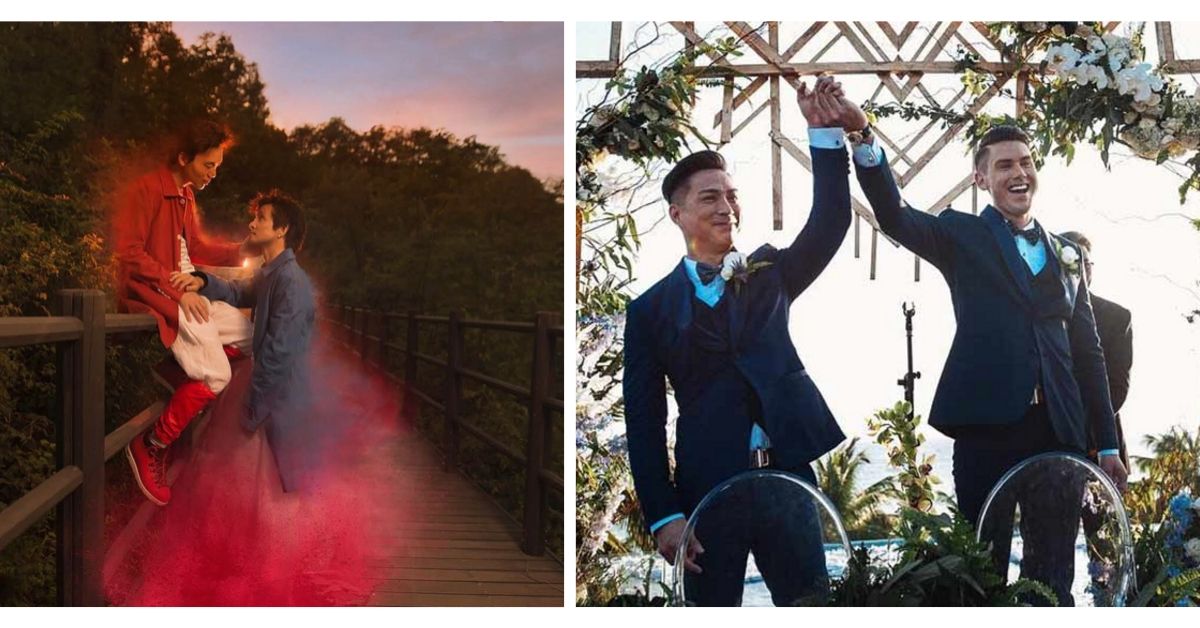 With governments across Asia and the world trying their best to repress same-sex marriage, it’s easy to see why many in the LGBTQ+ community have become jaded with love.

Despite the bleak circumstances, we hope that the strength and love these eight couples display in getting married give hope to the countless others who feel like they cannot. Because whether it’s two people sharing vows in private or a high-society extravaganza, everyone deserves to have their love recognised and accepted.