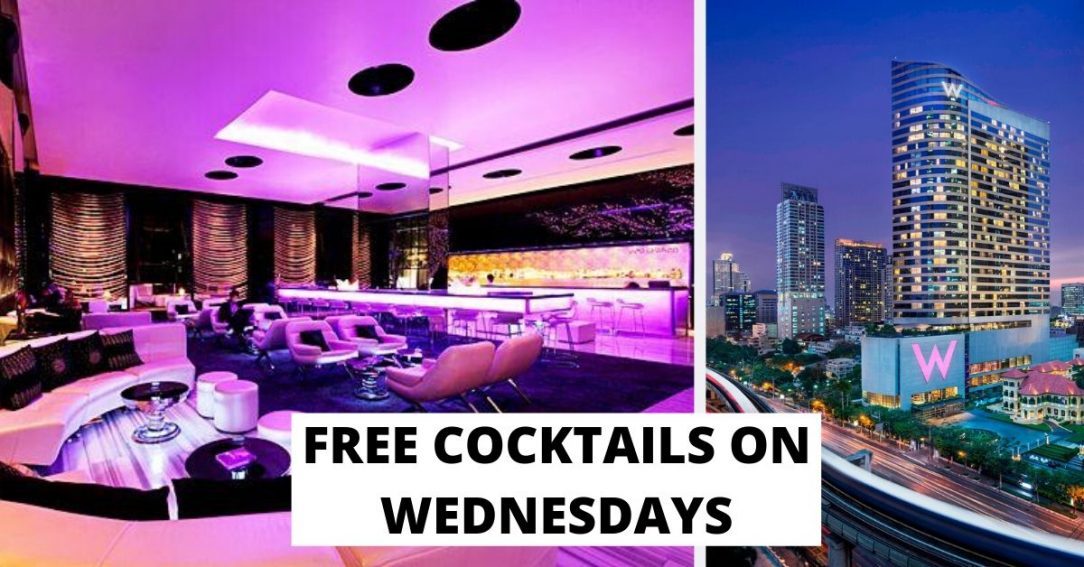 From Bangkok’s most popular spots such as DJ Station to hidden gems known only to locals such as Wine Bridge, this guide is everything you need to know about Bangkok’s gay party scene.

Bangkok’s reputation as the ‘gay capital of Asia’ is certainly not without reason. Thailand actively courts the pink dollar, playing host to some of the biggest gay parties in the world.

But with large amounts of tourists flocking to the country each year, recommendations seem to run dry as the same names tend to keep popping up. We’re here to change that.

We’ve gathered a list of hidden gems along with intel on deals that often fly under the radar. And if you still want to know about the places everyone raves about, we’ve got that too. This guide is here to help you find what you’re looking for: from Bangkok’s most popular spots to gems known only to locals.

One of Bangkok’s best kept secrets, Woo Bar is where you can drink for free on most Wednesday nights!

Woo Bar at W Hotel serves 3 free cocktails to the first 30 guys that walk through their doors. Available between 7pm to 10pm on Wednesdays, we recommend getting there early to avoid disappointment.

Limiting the freebies to the first 30 guys was a recent change as Woo Bar used to serve 3 free cocktails to all male patrons between 7pm to 10pm on Wednesdays. So we recommend checking with them directly first before heading down.

Free alcohol aside, Woo Bar boasts a chic and trendy environment that makes it worth a visit. Their specialty cocktails that reflect the unique tastes of Thailand has made it a popular spot amongst Bangkok’s inhabitants: both local and expats. The bar sometimes plays hosts to LGBT events featuring drag performances as well.

Want to immersive yourself in a more local experience and see what the Thai idea of fun is? Then look no further than FAKE Club.

Unlike most other places, you’d be hard-pressed to find foreigners or expats here, even the servers don’t speak much English. But that’s all part of the club’s charm. Topped with flashy performances and a party that goes all night, it is definitely worth a visit for those who want a more localised experience.

If you want an even more localised experience compared to FAKE Club, Wine Bridge is your answer. This hidden gem is so under the radar that some of the locals don’t even know of its existence.

Its entry fee may be a tad steep but the ambience of this place is on FIRE! Wine Bridge may not have a dance floor. But as the night goes on, the crowd tend to just dance around their tables and sing along to the music at the top of their lungs.

A word of advice though. Unless you can speak Thai fluently, it is highly recommended you go with a Thai friend or you may find yourself feeling overwhelmed here.

Not actually a gay establishment, Hiyaku Restaurant has inadvertently attracted a sizeable gay crowd courtesy of its affordable alcohol and top 40 hits.

Conveniently located in Groove Central World, Hiyaku Restaurant tends to attract a younger gay crowd. Known for their sizzling ambience, it has become a part of the restaurant’s culture for patrons to dance along to the music, often in highly synchronised fashion. Just take a look at the video above and you’ll get what we mean.

Hiyaku Restaurant tends to get crowded real quick on Friday and Saturday nights so we recommend getting there early.

Open nightly with three floors of fun to choose from, DJ Station (often jokingly referred to as ‘The Soi’) is Bangkok’s oldest, biggest and most popular gay club.

One of the biggest draws of this club is that you get access to a whole range of clubs (not just DJ Station) located at Soi 2 by just paying the entry fee of ฿400 at the entrance of Soi 2. While the neighbouring clubs in Soi 2 used to be relatively empty as compared to DJ Station in the past, the entire Soi 2 is now pretty much packed every day of the week with tourists and locals alike.

If you’re tired of wondering if the guy you’re talking to online actually looks like his profile picture, why not go to the real life version of Grindr?

Open till late, G Bangkok (also known as ‘G.O.D’ which stands for ‘Guys On Display’) is the place to be if you don’t want to stop partying after a night out at DJ Station. Located just a short walk away from Soi 2, attendees are often shirtless with many of them on the ‘prowl’. The club definitely provides an atmosphere of privacy so that you can do you.

At midnight, the club also hosts drag shows although if you ask us, the best time to hit up G.O.D would be around 1am. 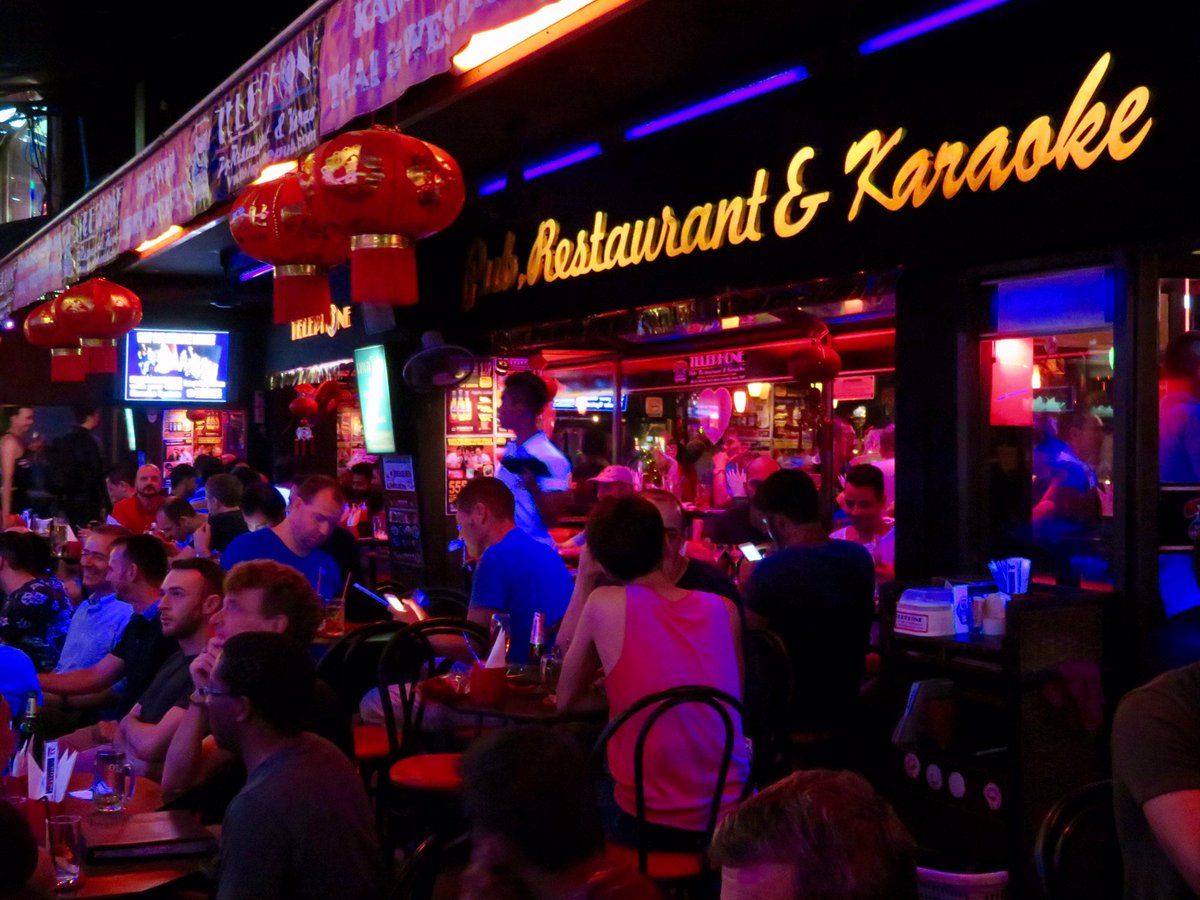 Silom Soi 4 is the gay equivalent of popular walking streets such as Khao San Road. The entire street is filled with a wide range of gay bars and establishments – including massage parlours if you feel like giving your body a break.

Some of the popular spots in the Soi are: Telephone Pub, a restaurant and karaoke with cabaret shows every Wednesday. The Balcony, a friendly bar with an extensive food menu and decently priced drinks. The Stranger Bar, popular for its nightly drag shows. Jupiter, a go-go bar that offers nightly ‘sexy shows’.

On Sundays, this bar located at Novotel Hotel turns into a gay hub, courtesy of its popular Gay Night that features performances from some of Thailand’s most popular drag queens such as Pangina Heals.

Created by Ashley Sutton, the designer behind some of Asia’s most famous bars, Maggie Choo’s is a 1930s Shanghai-themed restaurant and bar that takes ‘chic’ to the next level. The bar draws an international crowd, promising special drink deals, fun games and eye candy in every corner. In many ways, Gay Night at Maggie Choo’s is a welcome respite on a Sunday night.

Plan A Fun Night Out In Bangkok, Thailand

If you’re in the mood to hop from place to place, everything from Silom Soi 2 to 4 is sure to entertain you. There, you’ll get the experience that many tourists fly all the way to Bangkok for.

But for a more authentic experience, be sure to check out the local gems and party like a local.

Support Dear Straight People and our mission in providing valuable LGBTQ+ content by joining us on Patreon!