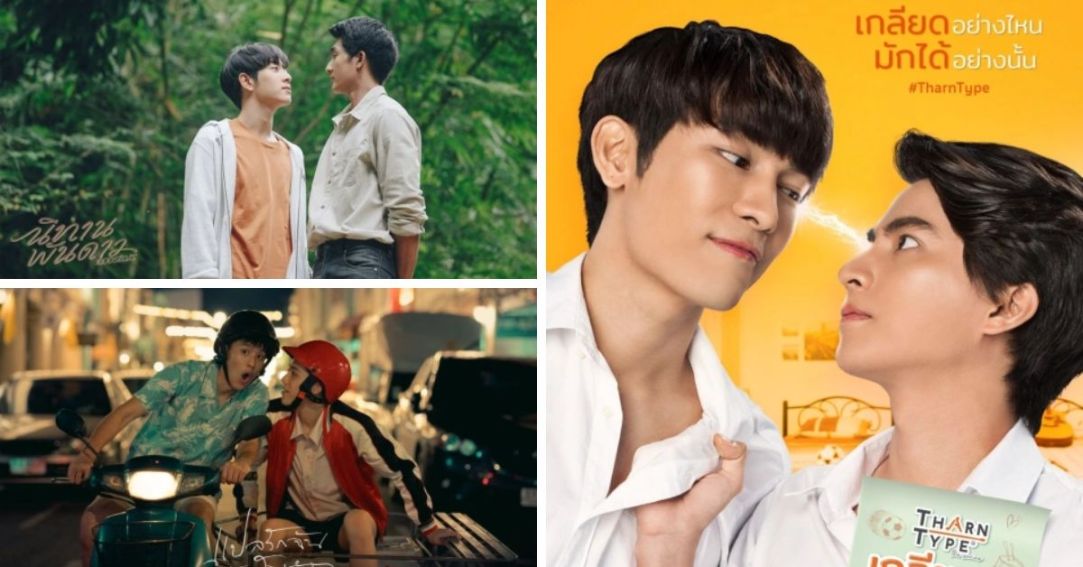 From SOTUS to Tharntype The Series, find out what the top 10 Thai BL dramas of all time are as ranked by BL fans.

In recent years, BL dramas have taken the world by storm.

BL, short for Boys Love, has become an umbrella term for any Asian drama centering on a gay love story. And Thailand has emerged as one of the leading producers of BL dramas.

With hundreds of Thai BL dramas to choose from, it can be confusing for non-BL enthusiasts to decide which drama is worth their time.

But fret not, a recent survey of BL fans have revealed the top 10 Thai BL drama series of all time, accompanied by commentary from a hardcore BL fan.

10) I Promised You the Moon

Overview: This coming-of-age series stars Putthipong “Billkin” Assaratanakul and Krit “PP” Amnuaydechkorn as teenage boys Teh and Oh-aew, and explores their relationship as they come to terms with identity, teenage angst, and love.

BL Fan Commentary: I Promised You the Moon touched on some sensitive subjects, one of which was “cheating”. I’m guessing the fandom was rather prejudiced by main lead Teh’s (Billkin Putthipong) self-destructive behavior.

The second season was focused on his personal development, as he comes to terms with his inner demons while trying to adapt to the drastic changes in love interest Oh Aew’s (PP Krit) personality. College life is quite different from teenage years and this show has well documented the morbid realities that most teenagers experience; when they are faced with real life. While Oh Aew was able to hold onto dreams and ambitions because of a strong support system; Teh was lost in the sea of loneliness while traversing through his mind barriers. Indeed, a life altering romance with unimaginable memories!

9) Fish Upon The Sky

Overview: Based on a popular book adaptation, the show focuses on main lead Pi’s (Phuwin Tangsakyuen) life struggles. Loosely based on the “Ugly Duckling” fable, Pi’s life goes through a drastic change when he falls for one of the hottest students on their campus, Mueng Nan. While trying to get Mueng’s attention, he has a face off with his apparent love rival Mork (Pond Naravit).

BL Fan Commentary: This show is a complicated and bizarre mess; the satire is oddly worded and the show courted quite a few controversies. While both Pond and Phuwin have a formidable chemistry; the lack of intimacy between their characters was jarring. Their low-key dynamics will leave you emotionally exhausted. The second lead couple, Duean (Neo Trai) and Meen (Louis Thanawin) unexpectedly had a more mature romance with a decent storyline.

The script could have been better, if it wasn’t loaded with overused BL clichés and abysmal level of storytelling.

Overview: Aspiring writer Gene (Poompat Iam-samang) is pressured to write a novel in the BL genre, which leads him to cross paths with Nubsib (Noppakao Dechaphatthanakun) who auditions for the series

BL Fan Commentary: I was actually quite surprised with the low ranking for this show. It seems like the Thai BL fandom have a distinct taste, but despite that “Lovely Writer” is surely one of the best scripted dramas of 2021.

I wasn’t expecting much from the fresh pairing of Up Poompat (Gene) with popular BL actor Kao Noppakao (Nubsib). But just like in real life, these two have turned the tide in their favor with their simmering chemistry that consistently switches from sweet to hot. As a rookie actor, Up doesn’t falter in dialogue delivery and his acting skills are commendable. Kao on the other hand portrays Nubsib’s complex emotions convincingly.

The show touched on some major issues in the BL industry (both novels and dramas), starting from the over controlling executives to toxic fans. The drama took a subtle dig on the various aspects of the entertainment world which affects the BL writers and actors in an adverse way.

Overview: Based on popular author Sammon’s novel, Manner of Death focuses on the problems faced by medical examiner Dr. Bunnakit (Tul Pakorn) when he starts to discreetly investigate the “Cause of Death” of his close friend Jane and comes across potential suspect/love interest Tan (Max Nattapol).

BL Fan Commentary: Obviously, the show’s success was hugely attributed to the flamboyant casting and the lead pair’s explosive chemistry. MaxTul are probably the most popular BL coupling in Thailand.

Although the storyline did falter in some places with its odd pacing, they managed to salvage the show with their exceptional acting talents. Bun and Tan have an odd dynamics which adds a rustic feel to the mystique surrounding the murder attempts. Watch it, if you are bored with the overused regular BL college tropes. This show isn’t exactly exceptional, but MaxTul’s chemistry will keep you hooked!

6) A Tale Of Thousand Stars

Earth Pirapat and Mix Sahaphap have an undeniable chemistry which leaves you spellbound. While Mix’s intense portrayal of Tian’s emotions is devastating; Earth’s polished act is impressive. Their journey depicts the differences in their social stature in the backdrop of the LGBTQ-associated stigmas.

The cinematography is excellent and the attention to detail showcases their brilliant directing style. The drama grabs your attention from the start and despite the lack of explicit scenes, Phupha and Tian’s love for each other is viable. Although they do face struggles and misunderstandings tear them apart, A Tale of Thousand Stars is a mesmerizing tale of “Happily Ever After”

5) I Told Sunset About You

Overview: Filmed on the scenic beaches of Phuket, I Told Sunset About You is a forbidden tale of unhinged romance between two teenagers who are discovering their true selves.

BL Fan Commentary:  This miniseries focuses on main lead Teh’s journey of self discovery, as he comes to terms with his new-found sexuality as well as feelings for frenemy Oh Aew.

The subtle contrast of vibrant colors lends a diverse diaspora to their emotions, as both Teh and Oh Aew face their personal demons. While Oh Aew is more daring in expressing his feelings ; Teh’s cowardly attitude might grate on your nerves.

Despite that, they are like “Yin and Yang”. Teh and Oh Aew are pieces of the same puzzle that fit together and are meant to be with each other. Billkin Putthipong portrays Teh’s flaws with a brutal honesty. PP Krit’s soulful expressions and flawless portrayal is praiseworthy. I Told Sunset About You has definitely raised the bar for future BL classics!

BL Fan Commentary:  This show courted a lot of controversies because of its unusual storyline and depiction of unhealthy relationships.

While Mew and Gulf have a scorching hot chemistry, the storyline leaves you exasperated. Tharn molesting Type repeatedly triggers Type’s homophobic tendencies and Type’s childhood trauma are some of the issues that needed proper reckoning.

While the horrible acts by the antagonist Lhong (Kaownah Kittipat) will leave you aghast; our main lead couple’s relationship is undefined. Despite that, this show can be a worthwhile watch if you can digest the horrible character development along with the abysmal storyline.

Overview: Adapted from a novel by BitterSweet, SOTUS focuses on the rather regressive SOTUS (acronym for Seniority, Order, Tradition, Unity, and Spirit) system employed in the Engineering Faculty.

Arthit (Krist Perawat) a third year senior, often abuses his power over the juniors. Things change when one of the freshmen, Kongpob (Singto Prachaya) stands up against the abuse. As Kongpob continuously opposes Arthit, their relationship switches from animosity to affection.

BL Fan Commentary:  SOTUS is deservedly an old classic. The beauty of this script lies in the fact that the characters are well written and their relationships are depicted realistically.

Krist and Singto are undeniably one of the most popular BL couples in the Thai fandom and their close friendship translates to great chemistry on screen. Though it does seem lackluster in the initial episodes, their acting eventually gets better as Arthit and Kongpob’s relationship is tested. Definitely a must-watch saga!

2) Until We Meet Again

Overview: Until We Meet Again is about two modern-day college students, who discover that they are the reincarnated souls of two past lovers who had committed suicide.

BL Fan Commentary:  A choice that I wholeheartedly agree with! A reincarnation saga with unhindered romance; the show became hugely successful because of its unique casting and formidable storyline.

Spanning two different eras, the drama showcases the invariable differences in the societal mindset. While regret becomes a common theme across the two generations, the underlying differences between the reincarnated characters becomes the prime focus of this story.

The story might seem slow, but it is well paced. The parallels between the past and present are well documented and I’m in love with the impressive chemistry between both couples.

If you are looking for a drama within the fantasy genre with a BL twist, then Until We Meet Again should be high on your watch list!

Overview: This 2020 BL series is an adaptation of the 2019 Thai novel of the same name by JittiRain. The series follows the story of two college boys who go from being in a fake romantic relationship to developing into a real couple.

BL Fan Commentary:  Garnering the most votes, “2gether The Series” is certainly a winner. The drama’s success is because of the fresh pairing between main leads Bright Vachirawit (Sarawat) with Win Metawin (Tine).

My only issue with this romance is that it seemed to frizzle after they became official. Sarawat and Tine seemed more in tune when they were fake dating. Their relationship goes through several upheavals before they finally accept their feelings for each other. Another intriguing aspect is the unforgettable romance between Man (Mike Chinnarat) and Type (Toptap Jirakit).

Despite their irreconcilable differences, Man and Type’s relationship was scripted in a much better way than the main lead couple.

Tags: 2Gether The Series, A Tale Of Thousand Stars, BL Drama, dear straight people, Fish Upon The Sky, I Promised You The Moon, I Told Sunset About You, Lovely Writer The Series, SOTUS, Thai BL Drama, Tharntype The Series, Until we Meet Again