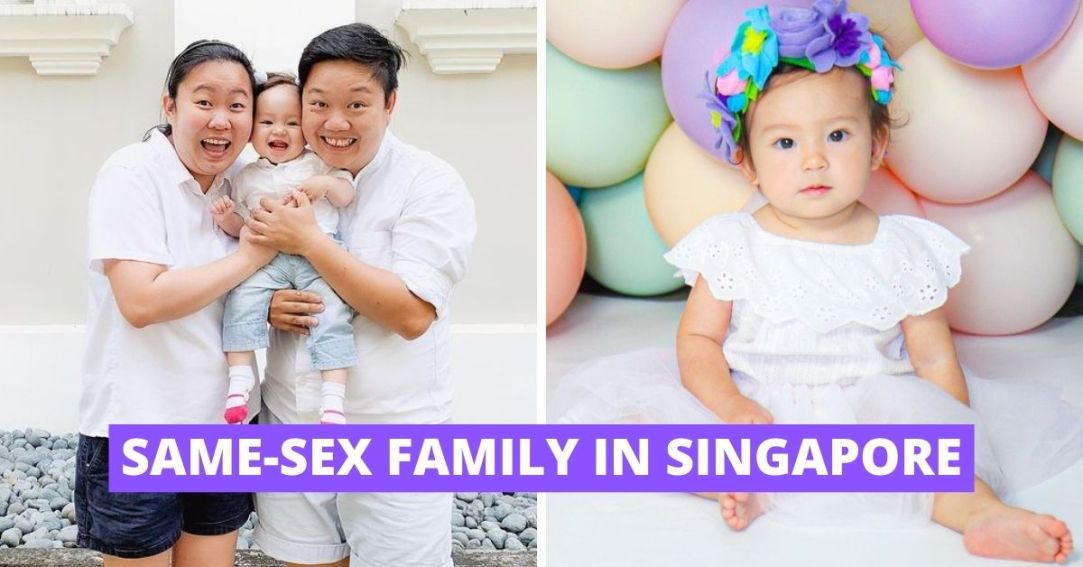 Out Of The Closet – Pearlyn and Brenda Share Their Story

Meet Pearlyn, Brenda and their adorable baby Velda, a same-sex family based in Singapore.

My heart skipped a beat when I first chanced across their IG handle – @TwoMomsSG.

A same-sex family in Singapore? I almost couldn’t believe my eyes.

Now, Dear Straight People has featured same-sex families before. But none of them were based in Singapore. Not even Olivia and Irene, who are both Singaporeans.

From throwing pride flags at service staff to ripping pride flags off windows, homophobic incidents in Singapore seem to be on the rise. Singapore doesn’t exactly seem like the most nurturing place for same-sex parents to raise a family.

So when I found out about @TwoMomsSG, I reached out to them immediately.

Together for 17 years, Pearlyn and Brenda made the life changing decision to have a child 5 years into their relationship. Starting a family as a same-sex couple in Singapore however, is challenging to say the least.

“We were clueless and did not know where to start. A lot of time was spent researching online.”

The journey that Pearlyn and Brenda embarked on was a road fraught with challenges and setbacks. Not only was the process time consuming, the multiple failures took a heavy toll on them physically, mentally and financially.

After years of trying, the couple finally welcomed baby Velda to their family in 2020. Now, they are on a mission to help other same-sex couples do the same.

“We hope that we will be able to help other couples out there who are intending to start a family, just like how others have helped us.”

HOW THEIR BABY-MAKING JOURNEY STARTED

Pearlyn and Brenda met as teenagers during a night out at Clarke Quay, and have been inseparable since.

Not only are they a couple, they’re business partners too. Running a balloon and party company together means that they are surrounded by kids all the time. The constant exposure to children made them want to start a family of their own.

“Both of us really love kids and being in the kid’s industry made us want to start a family even sooner.”

Although they were both only in their early twenties then, Pearlyn and Brenda began making serious plans to start a family. They started saving up and doing a lot of research.

Although the couple knew that starting a family would be challenging, the obstacles that came their way outweighed their initial expectations.

CHALLENGES IN STARTING A FAMILY

For same-sex couples in Singapore wanting to start a family, there are several options available. But the only way to do it is to do it overseas.

Pearlyn and Brenda initially went with the IUI (intrauterine insemination) route. They tried four times overseas. Despite their best efforts, all four IUI attempts failed. The repeated failures took a heavy toll on them in every imaginable way.

Undeterred, Pearlyn and Brenda finally hit the jackpot when they tried IVF (in-vitro fertilization). Even then, the journey was challenging.

Due to the requirements of the procedures, they had to book last minute flights to travel overseas. So not only were they dealing with high costs and raging hormones, they also had to contend with the stress of last-minute flights. Worst of all, the repeated failures took a massive toll on their mental health.

After two years of trying, they finally succeeded! On 28 January 2020, the happy couple welcomed baby Velda into their family.

RAISING A SAME-SEX FAMILY IN SINGAPORE

The next challenge for Pearlyn and Brenda, would be raising a family in Singapore.

Singapore doesn’t boast the most accepting or inclusive society. So when I quizzed Pearlyn and Brenda about what it was like to raise a same-sex family in Singapore, their response may actually surprise you.

“There have been more positives than negatives thus far, but we really do not want to jinx it.

People will question and we will explain what our family unit is like. The older generation are very receptive about it. They will always give some form of encouragement and say that it is very educational.

Some have even commented that Singapore should allow egg-freezing and solo parenting!”

Pearlyn and Brenda also made an effort to connect with other same-sex families in Singapore. Having an IG called @twomomssg certainly helps. And they’ve connected with many same-sex couples through social media.

In fact, they revealed that there is a whole community of same-sex families in Singapore!

“There’s a couple of families in Singapore and we meet up occasionally to hang out.

The stigma is still there for same sex families but we are glad to have found our own support community.”

ADVICE TO OTHER SAME-SEX COUPLES

Pearlyn and Bredna have had to overcome setback after setback in their quest for a baby. Their challenging journey however, is unfortunately still the norm for aspiring same-sex parents in Singapore.

The journey for aspiring same-sex parents in Singapore is a road fraught with obstacles that will challenge you physically, mentally and financially.

Their biggest piece of advice for aspiring parents is that both parties need to be committed in wanting a child. Issues usually arise when one party is simply going along with their partner’s desire to have a child.

“We think that it is good if you can plan it out thoroughly, talk about the what ifs and how you will work together as a couple to start the family.”

Having a baby may not be a walk in the park for most same-sex couples. But Pearlyn and Brenda are a shining example of how it is possible to raise a family in Singapore.

“Do not be too bothered by what people will say about how you manage your family.

We can only hope and pray that Singapore will one day be an inclusive country, and let love be love.“

Having gone to hell and back, Pearlyn and Brenda are on a mission to make it easier for other couples wanting to start a family. That is one of the reasons behind their IG and its eye-catching handle.

“The IG handle started when we had difficulties finding same sex families to reach out to and find out more.

So, we told ourselves that we will do something similar so that in future, couples who are trying can reach out to us and we will let them know our journey and resources.”

Once again, Dear Straight People would like to thank Pearlyn and Brenda for sharing their story with us.

If you would like to keep up to date with how their family is doing, you can connect with them on Instagram via @TwoMomsSG

READ OUR OTHER FEATURES ON SAME-SEX FAMILIES:

Out Of The Closet: Jay Lin Shares His Story