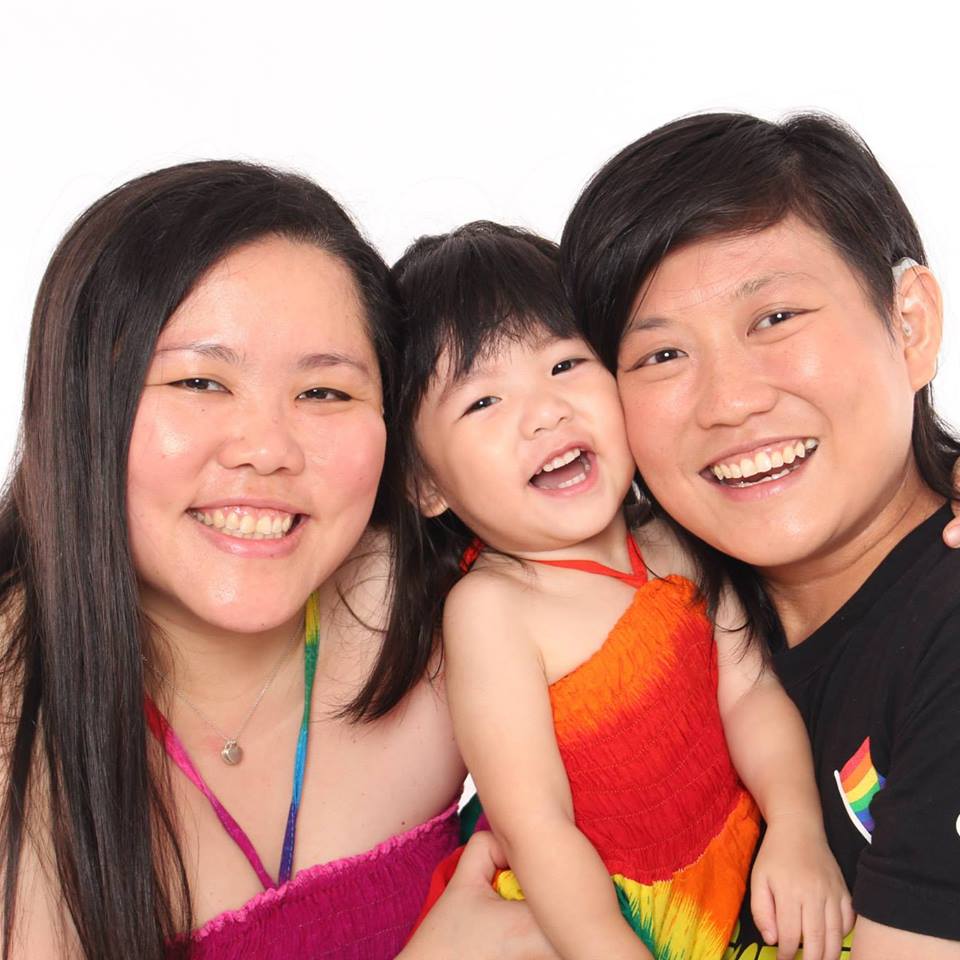 By Dear Straight People in Bisexual, Coming Out, Dating & Relationships, Dear People, Lesbian, LGBT Issues, Out Of The Closet on April 17, 2016May 4, 2020
One comment

The very epitome of familial bliss, it’s easy to see why this picture perfect family is the envy of so many. But their happiness was hard fought, and their journey, full of drama and tears.

This is the story of the Chiongs, and how they fought tooth and nail to bring Zoey into the world…

Despite being married to a woman, Olivia does not actually identify as a lesbian. Olivia has dated and slept with both men and women:

I’m actually bisexual… When I say I’m bisexual, most people go “Huh? But you with a woman what”

I enjoy sex with both genders, although my best orgasms have been with women.

Apart from harbouring an innocent girl crush in primary school, Olivia has never really experienced any lesbian tendencies growing up. It wasn’t till she fell in love with a female colleague at the age of 26 did she realise just how fluid her sexuality was.

I didn’t grow up as a lesbian so I can’t say I faced the same things others have faced.

I would say the most difficult part was getting people to understand that bisexuality is not a choice. I can’t force myself to only date men. 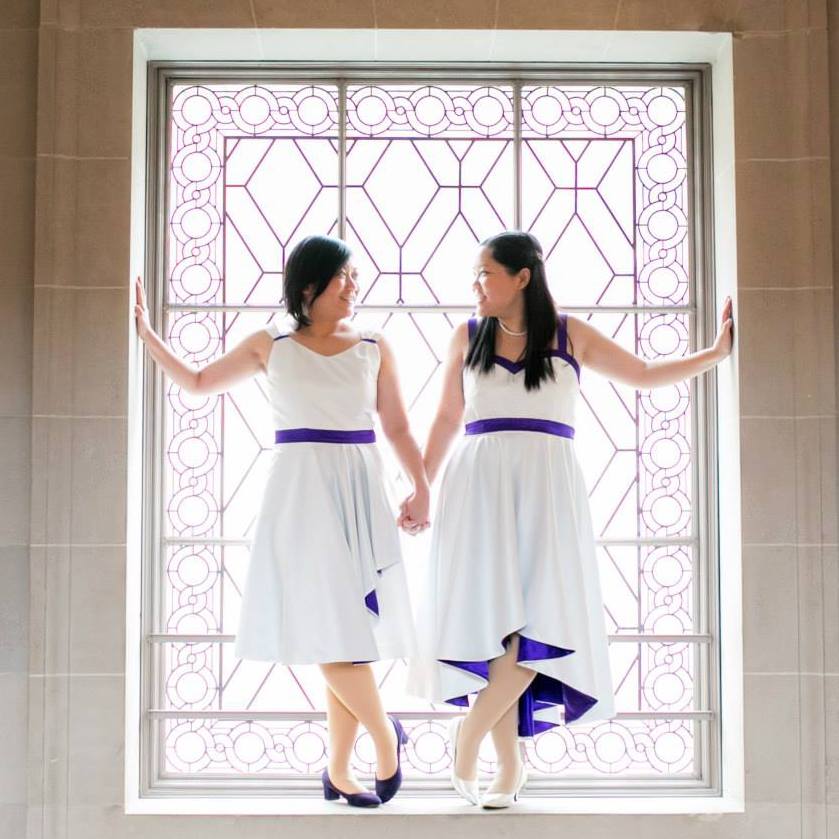 Her first relationship with another woman however, was a disaster to say the least. Olivia handled the break-up badly and ended up in the hospital from an overdose.

Some people thought I should go back to dating men instead.

However, I needed to better understand myself and why that relationship had failed.

In her search for answers, she turned to the lesbians that populate the forums of Sayoni; a website dedicated to empowering queer women. There, she was counselled by her virtual friends, but one netizen stood out particularly; her current wife Irene.

Irene was one of those who spent time with me and was the person I chatted (with) while I was depressed and trying to dig myself out of that hole. 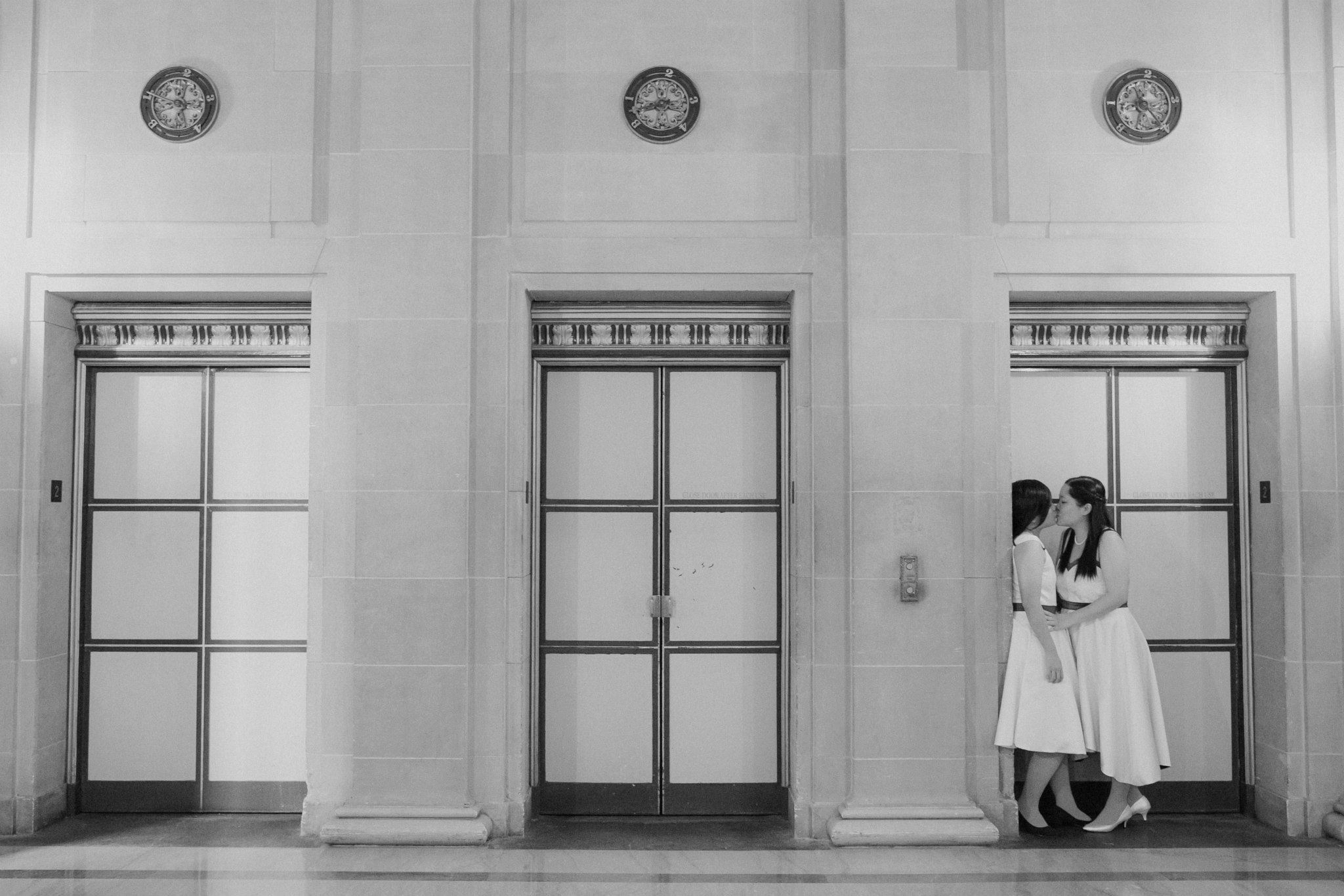 On Irene’s 25th birthday in 2008, the pair started dating.  After a 6-year long romance, Olivia and Irene got hitched in San Francisco in 2014. As both Olivia and Irene have always wanted children, their next goal was to add a child to their family.

Initially, they tried to have a kid in Singapore. From trying to access sperm banks and fertility clinics to being naturally impregnated by a sperm donor, nothing worked out. Due to legal regulations, same-sex couples in Singapore are unable to access fertility treatments and are barred from getting any help from local clinics and hospitals.

Their next course of action was then to try their luck in Bangkok instead. But even there, their troubles continued.

While in Bangkok, we faced challenges as well.

I had to be declared not crazy by a psychiatrist, our sperm got stuck in customs and then my uterus was deemed not suitable for pregnancy.

Loads and loads of drama with lots of tears. 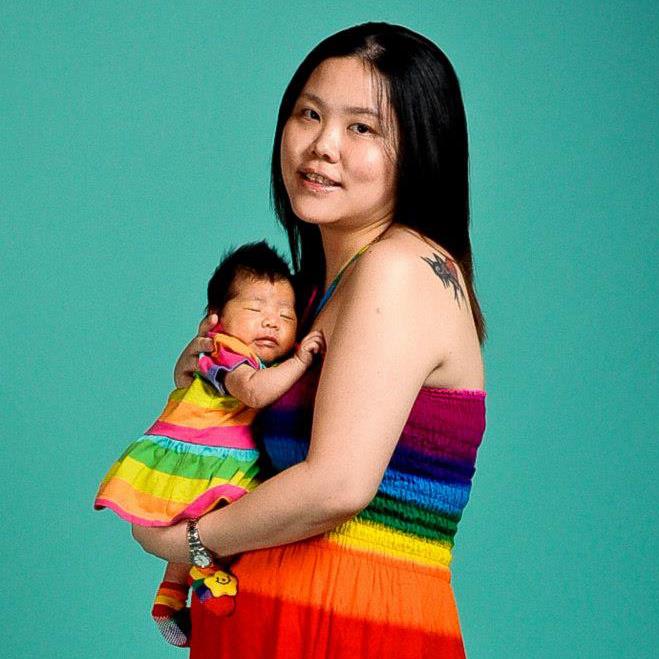 When Olivia finally got pregnant with Zoey, more challenges awaited the couple.

We had other challenges such as choosing a hospital to give birth at and attending pre-natal classes.

But on 11th March 2013, everything became worth it when Zoey was bought into this world. Since then, she has bought immeasurable joy to her happy parents.

Zoey is definitely worth going through all those challenges.

Zoey is independent while manja, brave while cautious and a truly assertive child with a huge personality. 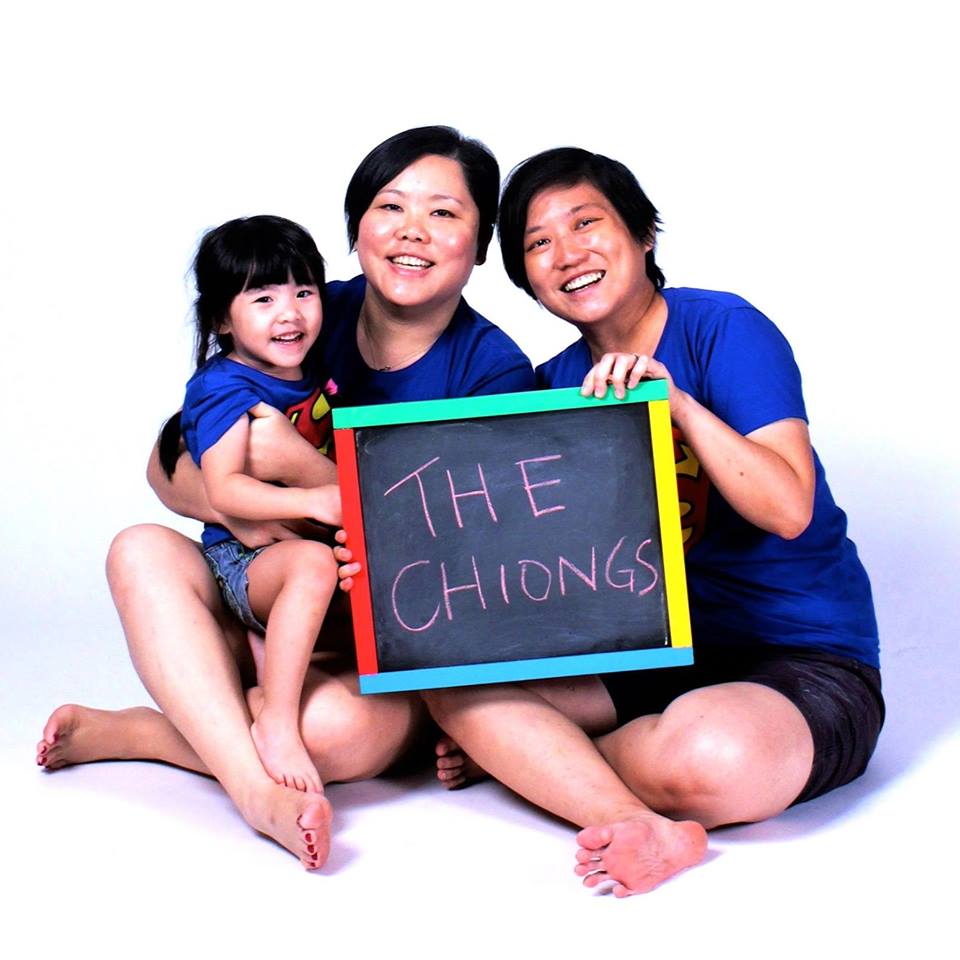 Currently working as an Operations & Partnerships Manager at Key Person of Influence, her interests range from reading and writing to hunting for the best bargains in town.

She aspires to to make a positive contribution to the world by creating impactful projects for the betterment of society. As part of that ambition, Olivia has actually written a book titled ‘Baby Zoey: Our Search for Life and Family’; a book that Olivia hopes will help inspire and educate other same-sex couples looking to start a family. 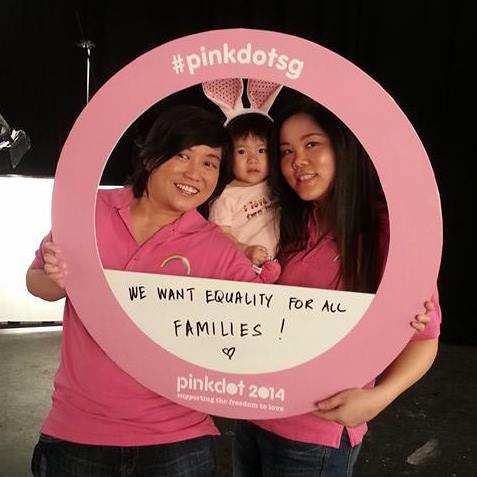 Currently in the midst of preparing for her upcoming book launch on the 30th of April, Olivia has very kindly agreed to share her story with us.

I absolutely don’t remember what my first coming out was like. It was very “matter of fact” for me. When I started dating my first girlfriend, I kind of just told people that she was my new significant other.

Sorry if this feels very anti climax. There was no huge fight or getting disowned. I know I am very lucky in this regard.

What was most interesting for me was when I came out to my mom. It was over MSN as she was living in US. When I told her that I was no longer with my ex-boyfriend and now dating a woman, her first reaction was – “What?! Does that mean I’m not going to have grandchildren?” She was more concerned about grandkids than the fact I was dating a woman. Fortunately kids were always on the books for me, so she didn’t have to worry.

It’s been 10 years and my family are fine with it. I mean, we are married and have a daughter. What else can they say? They know this is my family and we’ve worked hard to get where we are.

My mom loves Zoey and she tries her best to get along with Irene. We’ve had our fair share of mother-in-law vs daughter-in-law struggles and I’m glad to say it is improving.

My extended family treat our family equally. We are invited to all family events and I know they love us, so I have nothing to complain about

3. What were some of the parenting challenges that both of you faced as a result of being a same-sex couple?

There are many. To start with, Irene has no legal rights over Zoey. We cannot buy a HDB flat together. We cannot file taxes together. We don’t qualify for any baby bonus, child development account or other benefits. The list goes on.

We are fortunate to be educated and middle class. If we were not, I don’t think we could afford to have Zoey.

Even getting her birth certificate and naming her was a challenge, which was why Irene and I both changed our last names to Chiong. This is so Zoey can have the last name we had chosen for her.

4. What advice do you have for other same-sex couples wishing to have kids?

Make sure you are financially secure as the government is not going to subsidise you.

Plan and execute. Don’t think too much about what others might think. Reach out to us as we have a support group (called) Rainbow Parents SG for same-sex parents.

I think another interesting thing is most people worry about what their parents will think. However, from the same-sex parents we know, once a baby comes into the picture, all is forgiven. Most grandparents are so obsessed with the new grandchild that they completely forget about the fact that the child has same-sex parents. You will also find your parents start to advocate for you and your rights because they feel indignant that their child and grandchild is being discriminated against.

5. What do you think is the biggest misconception that straight people have about same-sex parents?

That same-sex parents will bring up gay or lesbian children. It doesn’t work like that. We are completely happy should Zoey turn out to be straight, gay or bisexual. We would not force her to be anything she is not and none of the other parents would do that to their children either.

Also, straight parents have gay children all the time!

6. Tell us more about your upcoming book ‘Baby Zoey: Our Search For Life and Family’

I started a blog where I wrote about some of it, but people continued to email me to ask questions. This book answers these questions and more.

I probably wouldn’t have written it if not for Epigram Books approaching me about it. It is one thing to blog about this topic and quite another to write about the entire story. The book covers quite a lot of intimate details about our lives and I had to get approval from Irene before I was able to tell our story.

There are more and more same-sex families as we progress. It is only a matter of time before there is a significant number. When that happens, I hope some legislations and regulations are changed so that our children are no longer disadvantaged.

As it is, our families face a lot of unfair discrimination, even though we pay taxes just like everyone else!

Dear Straight People would like to thank Olivia Chiong for sharing her story with us.

1 comments on “Out Of The Closet: Olivia Chiong Shares Her Story”