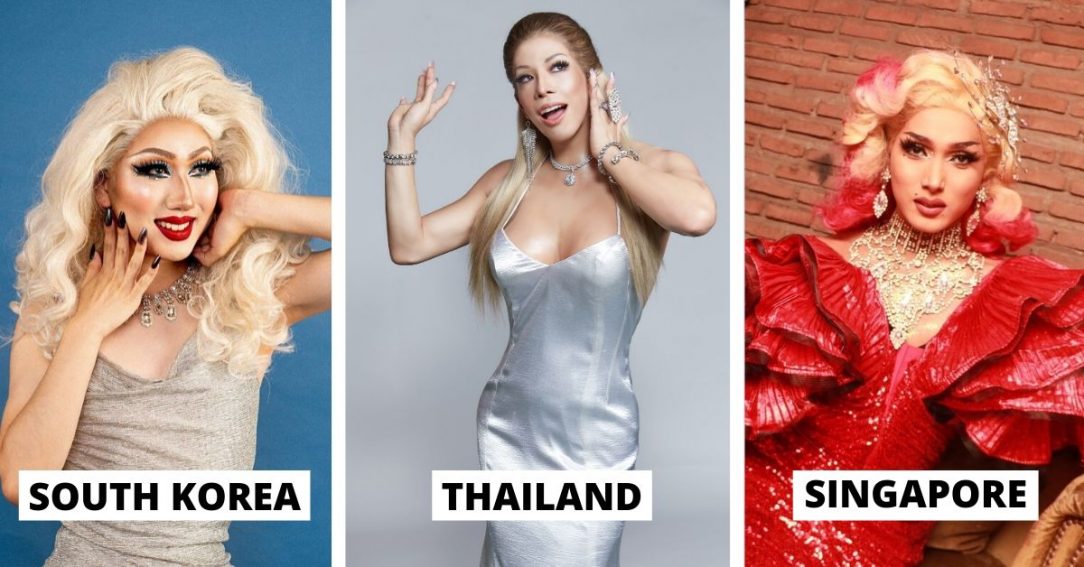 From Thailand’s Pangina Heals to Singapore’s Vanda Miss Joaquim, here are some of Asia’s best drag queens who we like to see compete on RuPaul’s Drag Race.

Over the past decade, RuPaul’s Drag Race has become a cultural phenomenon, turning many of its alumni into glittering superstars. RuPaul’s Drag Race has also notably featured Asian-American queens throughout its run, from season one’s Ongina to Plastique Tiara in season 11.
But wouldn’t it be amazing if we get to see one (or more) of our own homegrown queens from Asia compete on the world’s biggest drag competition?
Asia boasts some incredibly fierce queens. But despite their talent, Asia’s drag queens don’t quite have the same opportunities as their peers who have competed on RuPaul’s Drag Race.

With casting for season 13 of RuPaul’s Drag Race recently concluded, we’ve decided to round up a list of some of Asia’s best drag queens, who have the makings of America’s next drag superstar!

Often dubbed as the RuPaul of Thailand, Pangina Heals is already a superstar in her own right.
Thailand’s most famous drag queen, the co-host of Drag Race Thailand has over 150,000 Instagram followers and boasts over 14,000 subscribers on her newly launched YouTube channel. She’s even launched her own gay lifestyle brand, Karma Suitya.

Fame aside, Pangina Heals definitely has what it takes to compete, and even win RuPaul’s Drag Race. For starters, Pangina is fluent in English and boasts a crisp Californian accent, which will make her fit right in with the other queens on the show. But more importantly, Pangina Heals is known for her quick wit, strong drive and overall fierceness, which will make her a formidable competitor on RuPaul’s Drag Race.

In fact, Pangina Heals revealed to us in our interview with her just how hungry she is to compete again.

I would really want to compete on drag shows. I won’t say which one. But wouldn’t it be fun if I get to compete.

I want to do things that not only represent my art, but my people and what Thai people can do because Thai drag queens are fucking fierce as well.

As the only Asian queen to have won ARQ Sydney’s drag competition, Jai Sira has already proven herself as a formidable competitor on drag competitions.
Jai Sira got her start in drag while she was studying in Australia for her master’s degree. During her time down under, she was invited to fill in an empty spot on a drag queen team, to compete at Sydney’s famous ARQ club. After winning the competition, she returned to Thailand and was subsequently appointed as a co-host of Drag Race Thailand.

Often referred to as the Man-donna of Thailand, Jai Sira is well known for her Madonna impersonations. So queens on drag race better watch out, because Jai Sira could be the next lip sync assassin — if she ever has to lip sync, that is.

Vanda Miss Joaquim, named after Singapore’s national flower, is a powerhouse in the country’s drag scene. With more than a decade of drag performance on her resume, Vanda Miss Joaquim is one of Singapore’s most prolific queens.
No stranger to drag competitions, Vanda Miss Joquim won Singapore’s Drag Superstar 2010, and was a judge on various drag competitions in Singapore. Most notably, she placed 4th in Drag Race Thailand, earning the distinction of being the first Singaporean queen to compete.
As the mother of the House of Miss Joaquim drag family, it’s not hard to see her going far in RuPaul’s Drag Race.

One of Singapore’s most prominent drag performers, Becca D’Bus is renowned for her boisterous personality and her long running drag show RIOT!, that is staged around the city.
A drag veteran, Becca has been doing drag since the 90’s and got her start from participating in the art while attending Emerson College in Boston. In fact, Becca has already performed widely along the East Coast of the US before returning to Singapore in 2010, where she quickly established a name for herself within the local drag circuit, thanks to her loud outfits and colourful personality.

With her years of experience, we can foresee Becca D’Bus slaying the competition in RuPaul’s Drag Race.

You can read our interview with Becca D’Bus here.

One of Asia’s fastest rising drag queens, it would be exciting to see what she brings to the table should she get the chance to compete on RuPaul’s Drag Race.

Malaysian queen Shelah has been promoting LGBT culture in Malaysia for decades, earning her name as Malaysia’s top drag performer even among the tumultuous political climate.
Shelah is a radio presenter and satirist whose show was cancelled by the Malaysian Censorship Commission. Seksualiti Merdeka, the LGBT festival she planned, has also been banned since 2011. But that hasn’t stopped Shelah from performing and being her true self. She even coached Miss Universe Malaysia in 2018.
Even though she’s faced backlash, Shelah is still a powerful voice for LGBT Malaysians. That tenacity would get her far in RuPaul’s Drag Race.

South Korea’s Erica Chai may only be 24-years old. But she has already made her mark in Asia’s drag scene. A full-time drag queen, Erica Chai has been featured in media outlets such as VICE and NEON MILK.
As a former English teacher, Erica Chai would have no communication issues if she were to compete on RuPaul’s Drag Race. In fact, this skinny legend is currently based in New York City and was appointed as the opening act for Ru Paul’s Werq The World show in Seoul. 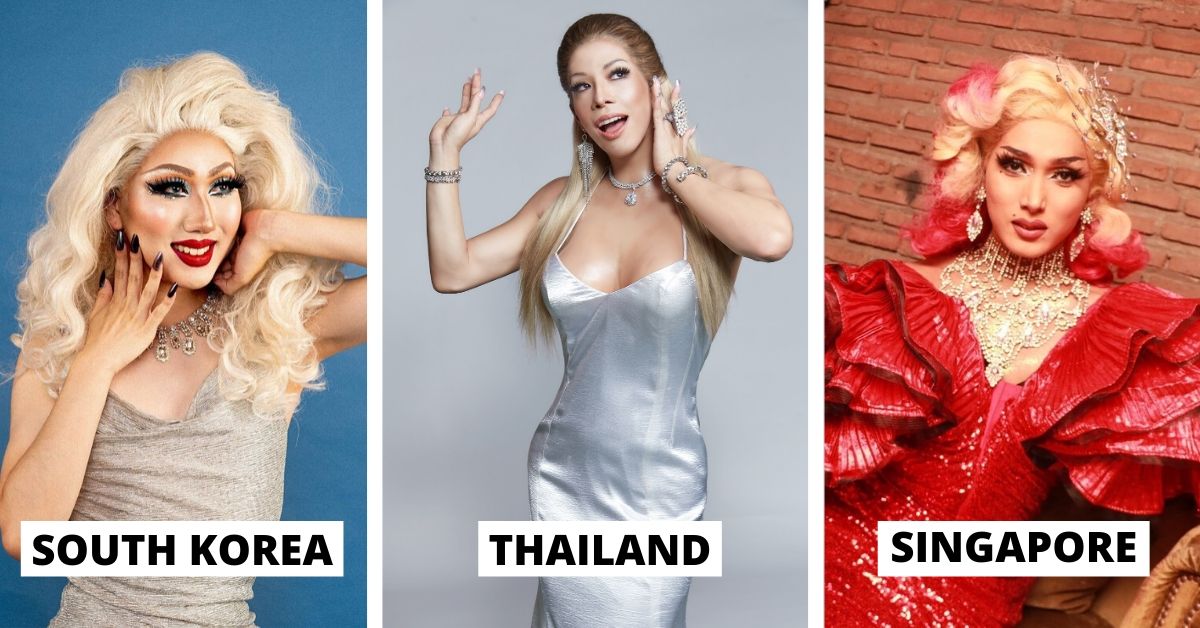 Drag queens have done immeasurable work in pushing forward LGBT rights all across Asia, but many of them receive almost no recognition outside of their home country. All of these drag queens are already superstars, and they deserve a chance to spread their charisma, uniqueness, nerve, and talent worldwide, so the world can see what they are capable of.
There are a lot more drag queens in Asia that would be fierce competitors on RuPaul’s Drag Race! If you know of any we missed, why don’t you tell us about them in the comments?

Read our past features on some of Asia’s most prolific drag queens here:

Out Of The Closet: Pangina Heals Shares Her Story

Out Of The Closet: Noris aka NORIStar Shares His Story