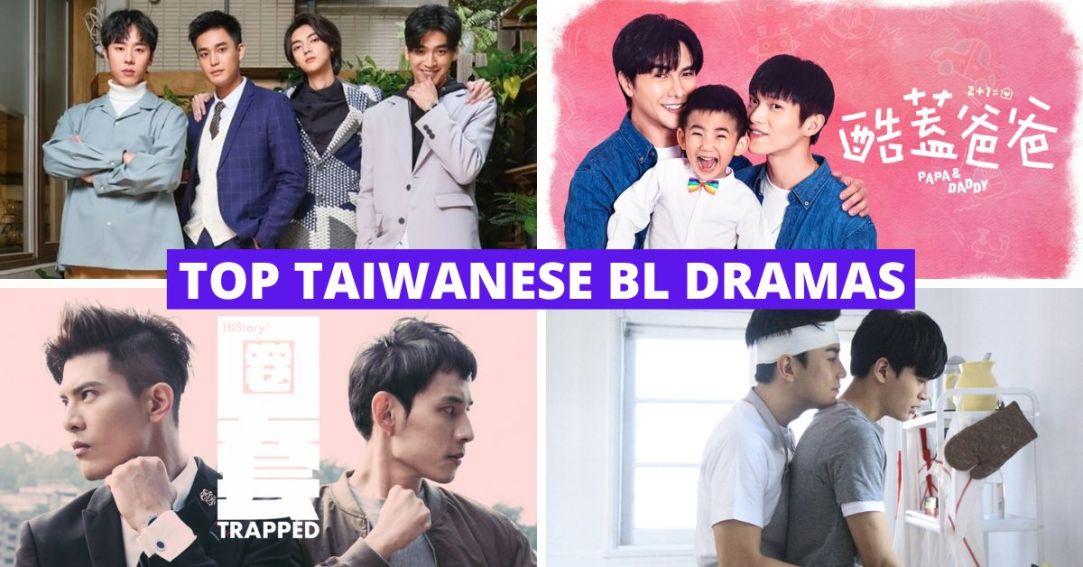 From Papa and Daddy to the HIStory franchise, find out what the top 10 Taiwanese BL dramas of all time are as ranked by BL fans.

Thailand may be dominating the BL (Boys Love) world. But you are missing out if you only confine your viewings to Thai BL dramas.

As a shining beacon of progressiveness in Asia, Taiwan is a leading producer of BL productions that deserves greater recognition. If you’re not sure where to begin, take heed from this survey of BL fans for the top 10 Taiwanese BL drama series of all time to decide which Taiwanese series to stream.

Overview: After a fatal accident, a heartbroken Shao Yi-chen (Teddy Ren) becomes reborn and vows to alter his own fate by avoiding the love of his life, Jiang Jin Teng (Bernard He).

BL Fan Commentary: Although the chemistry between the main leads is sizzling hot, it is difficult to digest the fact that their relationship is indeed “toxic”.

The sexual assault scenes in HIStory: Obsessed will leave you reeling from shock. The script suffers because of the excessive illicit scenes, which are distasteful. Since Jiang Jin Teng’s actions are deemed romantic, the power tilt hinges on obsessive imbalance. I’m not sure why anyone would want to date such a guy? HIStory: Obsessed is definitely a one-time watch.

Overview: Directed by Zero Chou, Because Of You follows three wealthy half-brothers as they navigate love and life.

BL Fan Commentary Although I have read quite a few mixed reviews about Because Of You, it will forever remain one of my favourites.

The main reason is the simmering chemistry between main leads, Yuan Jun Cheng and Lin Xun. Portrayed by handsome actors Lee Shi Kang and Hsu Mu Ji, this couple have an indescribable charm. In real life, they are close friends and their social media interactions will leave you feeling warm and fuzzy too.

Although there are some glitches in the script, the show is overall an enjoyable experience.

Overview: Two stepbrothers attempt to repress their romantic feelings for each other, while a sidelined volleyball player becomes drawn to a temperamental young recruit.

BL Fan Commentary This show relies on the all too familiar “Enemies to Lovers” trope. The love story in HIStory2: Crossing the Line does seem a little fast-paced. But for the considerable runtime, it is well written.

Overview: Damian, who runs a restaurant in Taipei, has always dreamt of having children. Together with his s boyfriend Jie Li, the two embarked on a surrogacy journey together and successfully gave birth to their son Kai Kai.

Everything went smoothly until Kai Kai entered kindergarten and began to face the curiosity and gossip of his peers and their parents.

BL Fan Commentary: This was one of my favorite BL dramas of this year.

Focusing on major issues of the LGBTQ community that don’t get talked about much such as surrogacy and adoption, Papa and Daddy was a perfect mix of innate life lessons and bitter realities. Although the main actors Melvin Sia and Mike Lin did a commendable joy portraying their character’s eccentricities and struggles, it was the child actor Kai Lin who won everyone’s hearts.

However, the show ended on an abrupt note and there has been no confirmation about the next season. I’m in love with this sweet, adorable family, so a sequel is definitely anticipated!

But when the finale episode gave us a twisted, painful overture, the scriptwriter and director drew heavy criticism.

Overview: In this sequel to “No. 1 For You”, We Best Love: Fighting Mr.2nd takes place five years after Zhou Shu Yi and Gao Shi De graduate from college. Their story unfolds as they juggle work responsibilities with the priorities of their personal lives.

BL Fan Commentary: Fighting Mr.2nd can easily be rated as one of the most popular sequels in the history of BL dramas. The show had an intense portrayal of complex human emotions, ranging from miscommunication to inferiority complex.

Although the show ended on a positive note, I’m hoping for a third season where we get to watch these characters embark on their final journey!

The romance hinges on the “Enemies to Lovers” trope, but mostly it is a tug of war between misplaced emotions and dormant desires. I will forever remember Shu Yi’s confession scene, because his expressions were so raw and painful. Sam Lin and Yu truly embody their characters and their comfortable chemistry is the biggest plus point of this global phenomenon.

Their journey begins with doubts and mistrust, which leads to major misunderstandings and conflict. Despite being from vastly different backgrounds, our innocent cop ends up falling for his assassin lover.

BL Fan Commentary:  One of the most enterprising ventures in the HIStory franchise, HIStory 3: Trapped is a mafia romance that spells revenge, love, separation and more. Unlike most HIStory shows which are flavoured with explicit sexual scenes (but lack a meaningful script), HIStory 3: Trapped must be applauded for its brilliant storytelling and praiseworthy casting.

Overview: Produced in 2021, the premise of Be Loved in House: I Do is set in Seisei Studio, which is in danger of going bankrupt.

Yu Zhen (Aaron Lai) takes over the studio as its director and fervently establishes a rule prohibiting office romance, which upsets his new colleagues. Office employee Shi Lie (Hank Wang) is tasked with the mission of changing Yu Zhen’s mind.

As Shi Lie gets to know his new director better, he slowly grows to appreciate Yu Zhen’s efforts to save the company and the two develop feelings for one another.

BL Fan Commentary: This drama was met with mixed reactions, but I’m truly enjoying this show.

Overview: The 4th instalment in the popular “HIStory series”, HIStory 4: Close to You is a 2021 romantic drama directed by Chen Yi Yu.

Exceptionally gifted in his work, Xiao Li Cheng (Charles Tu) can close a deal without breaking a sweat. But when it comes to love, Li Cheng is the first to admit that he could use a little help. When new colleague Mei Fang (Cindy Chi) joins the office of Muse Weddings, it’s love at first sight for Li Cheng.

BL Fan Commentary: The winner was quite obvious from the beginning.

A fan favourite, HIStory 4: Close To You became popular because of the undeniable chemistry between main actors Charles Tu and Anson Chen. From redefining healthy relationships to being respectful of each other’s boundaries, Xiao Li Cheng and Mu Ren’s journey chronicles the problems faced by many people in the LGBTQ+ community. Their relationship is realistic, humble and enjoyable.

While the show courted a lot of controversy due to the stepbrother romance, it doesn’t affect the existent storyline that majorly focuses on the main couple. I’m guessing people loved watching Li Cheng and Mu Ren’s romance so much, that they slowly grew accepting of Ye Xing Si and Fu Yongjie’s love story. Though the fandom stands divided on this stance, HIStory 4: Close To You surely deserves to be the winner of this survey!

Tags: Be Loved in House: I Do, Because of you BL, BL Drama, BL Drama Taiwan, dear straight people, HIStory 3: Trapped, HIStory 4: Close To You, HIStory2: Crossing the Line, HIStory3: Make Our Days Count, HIStory: Obsessed, Papa and Daddy, We Best Love: Fighting Mr.2nd, We Best Love: No.1 For You