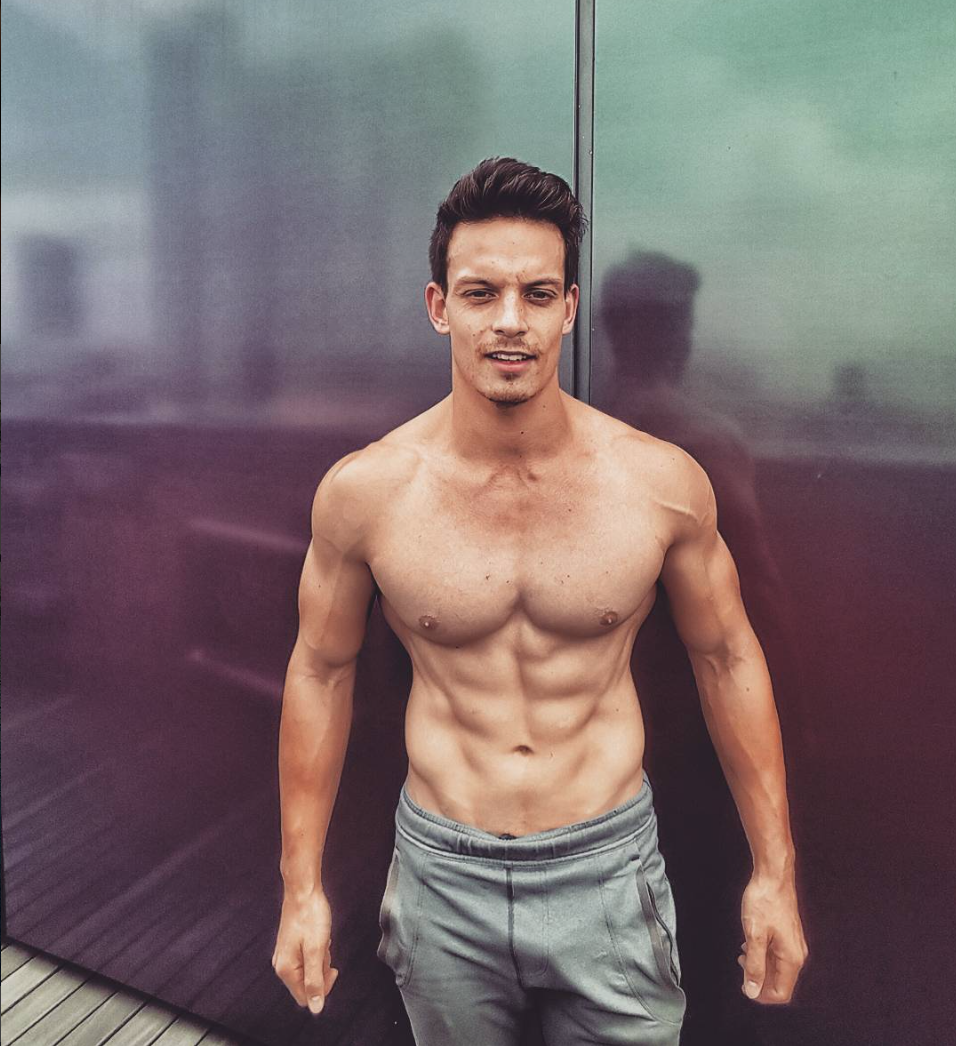 Fitspiration Of The Week: Luke Newton From Australia

Luke Newton is the type of guy who binges on fast food and yet still manages to boast a physique that even fitness models would be envious of. He’s also the only personal trainer whom I’ve met who actually advices against a diet of chicken breast and brocolli, a combination typically championed by fitness coaches.

If you can’t see yourself doing this diet for a few years, then don’t do it. There’s no point doing an extreme diet just for a festival or a concert. It’s all about balance.

Born to a Malaysian Chinese mum and an Australian dad, Luke’s parents divorced when he was just 8-years old. Raised by his mum in Melbourne, Luke coped with his parent’s separation by binge eating.

Throughout high school, I was bullied for being overweight.

Even my mum used to call me Tua Pui Kia (Hokkien for Big Fat Boy).

Obese throughout most of his teenage years, it wasn’t till Luke turned 19 that he started hitting the gym.

I started because of my younger brother.

Being an older brother, we had that competitive sibling rivalry and that triggered me because I felt that my brother can’t get bigger than me.

Luke may possess the body of a Greek god now. But his fitness journey had a pretty typical start – he was often clueless and intimidated.

I felt emasculated the first time I stepped into the gym. My younger brother was lifting so much heavier than me and I felt pretty humiliated.

I also tried the typical chicken breast and broccoli diet but I got quite skinny so I didn’t feel very good about myself.

Discouraged, Luke went through periods of gymming and not gymming. It wasn’t until University when he had a bit more time on his hands that he started to get serious about fitness. 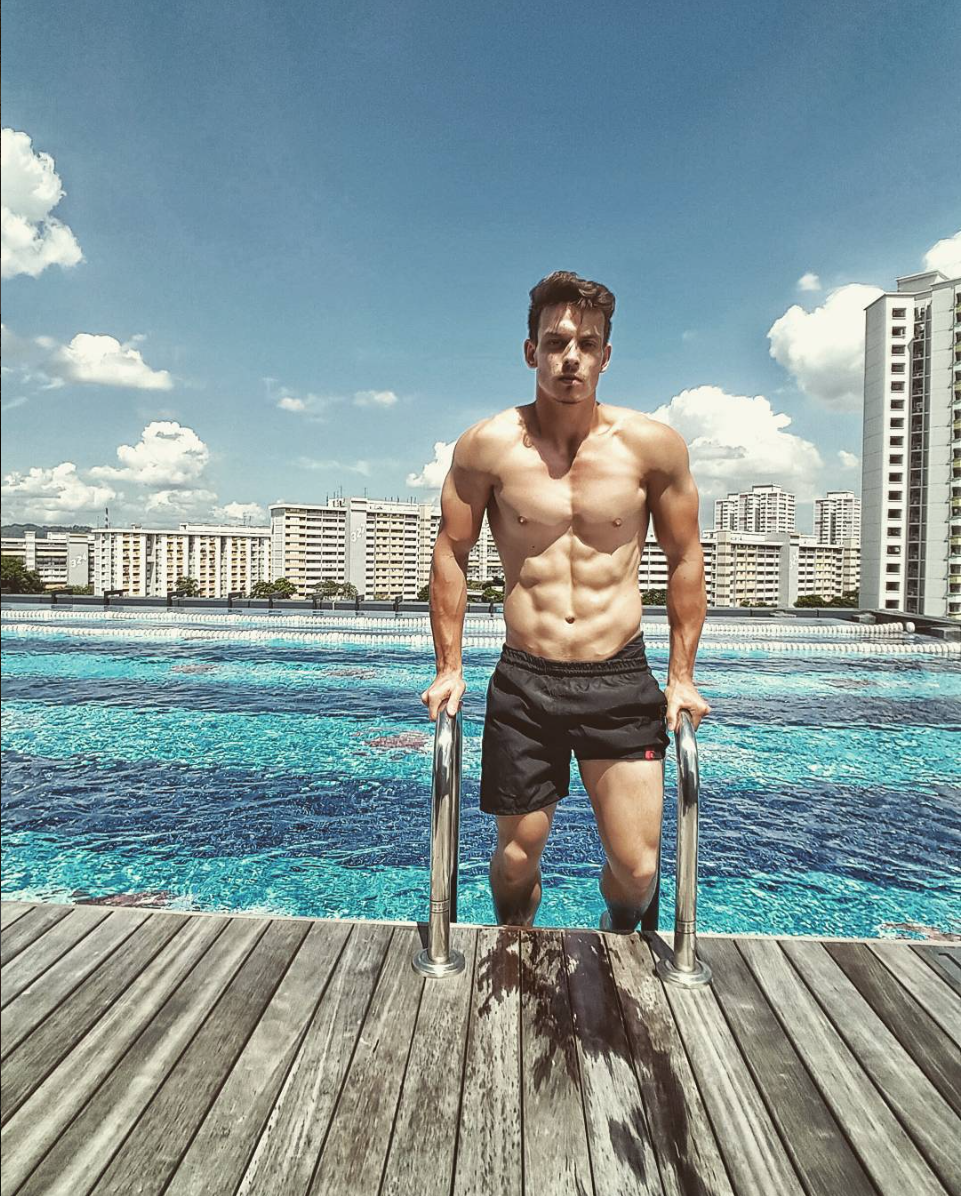 After a decade of working out in the gym, not only does Luke possess an enviable physique, he has also developed his own unique brand of fitness built on heavy lifts and moderate diets that he imparts to his clients.

That’s why I advise my clients to do exercises that involve a lot of muscle groups at one time. The best way to put on muscle mass is to lift heavy and progressively overload.

An international personal trainer who has coached professionally in both Australia and Singapore, Luke is an avid believer of indulging in cheat meals and strongly opposes extreme diets.

Fundamentally, it’s about calorie counting and secondary would be hitting the macros. There’s nothing wrong with having a cheat meal.

Happily married to his high school sweetheart Tania, the couple have a 4-year old daughter together. He also lets on that he managed to strike the jackpot on his first try as his wife is actually his first and only girlfriend! And while Luke may look like a typical jock, he is actually quite the opposite.

I was never into clubbing or sports or chasing chicks.

I was kind of into playing music. I played guitar and I can sing. I was a muso.

Check out the Profile and Q&A segment below for Luke’s fitness tips and what he would say to his detractors. 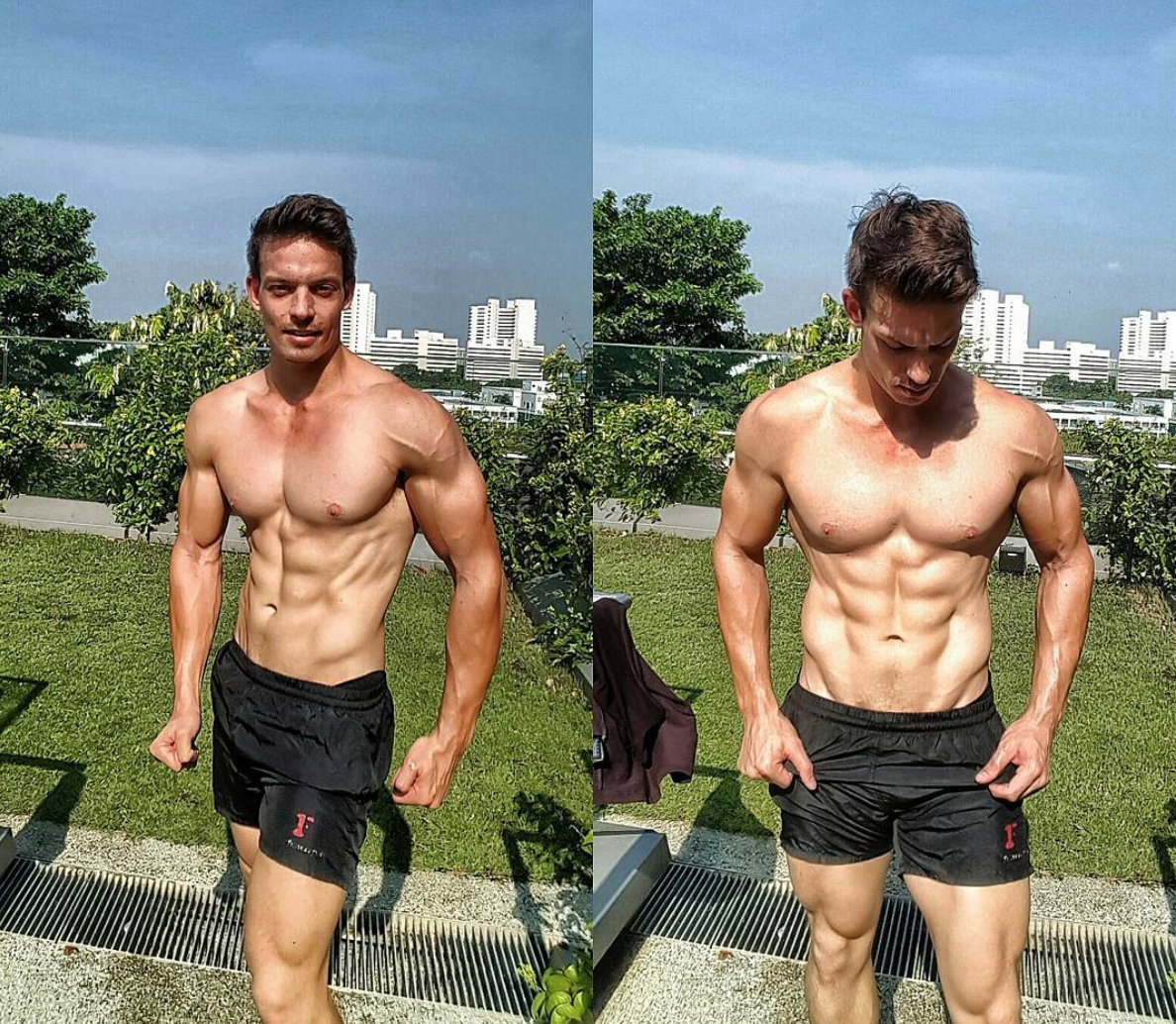 Workout Regime: I have gone through various workout splits and have found my preference to be full body workouts 5-6 days a week. I rotate the muscle groups each day of the week to avoid working areas that need more recovery, however I have trained my body to adapt to short rest periods, which has worked quite well.

I do direct training for my abs 2-3 times per week, switching between weighted and bodyweight exercises. My cardio is limited and is usually built into my weight training sessions. 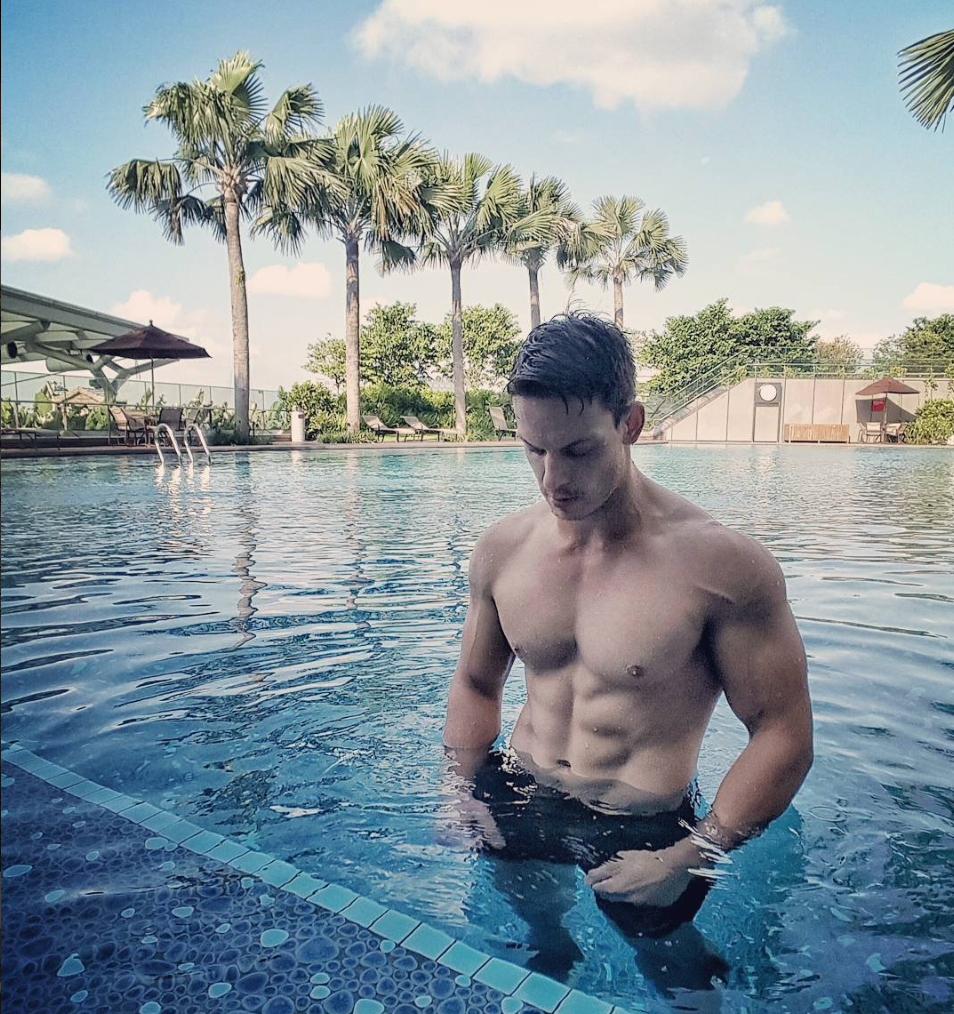 1. What would you say to trainers who disagree with your fitness ideology?

I would just tell them to look at the facts.

We’ve come to a point in the fitness industry where if you hit your macro calories, you’ll be able to hit your goal. It’s backed up by science and you just have to look at the figures yourself.

2. What was the hardest part about starting A1 Physiques?

Hardest part about starting was getting that first client.

I didn’t know how to establish my clientele. I didn’t know who my demographic was. It was difficult at first to find long term clients. I had to find out what people are interested in.

Most of the time, people want to lose weight or build muscle in a quick way and in an enjoyable way. Singaporeans don’t like to spend money so that’s something that I had to show them that it’s worth investing in.

3. Who are your clients now?

Most of my clients are male. Both gay and straight. A lot of men appeal to me because they want to build physiques.

I have a lot of expat clients as well as they engage me because I’m an international trainer so I train them in their condos.

4. What’s your advice to aspiring bodybuilders?

There’s no right and wrong.

You don’t listen to one trainer and treat that as the golden advice. It’s all about trial and error. You have to listen to the language your body speaks.

Trying different schools of thoughts like trying out ketogenic diets, intermittent fasting etc and experimenting with different ways of eating until you find something that fits you.

5. What do you think is the biggest fitness related misconception?

There’s quite a few out there but the biggest is that you can build up muscle and lose fat at the same time.

6. What’s the biggest reward for you in being a personal trainer?

This sounds very corny but I enjoy helping people with their lives.

7. What is your ultimate aspiration?

My ultimate goal is to run my own fitness business. 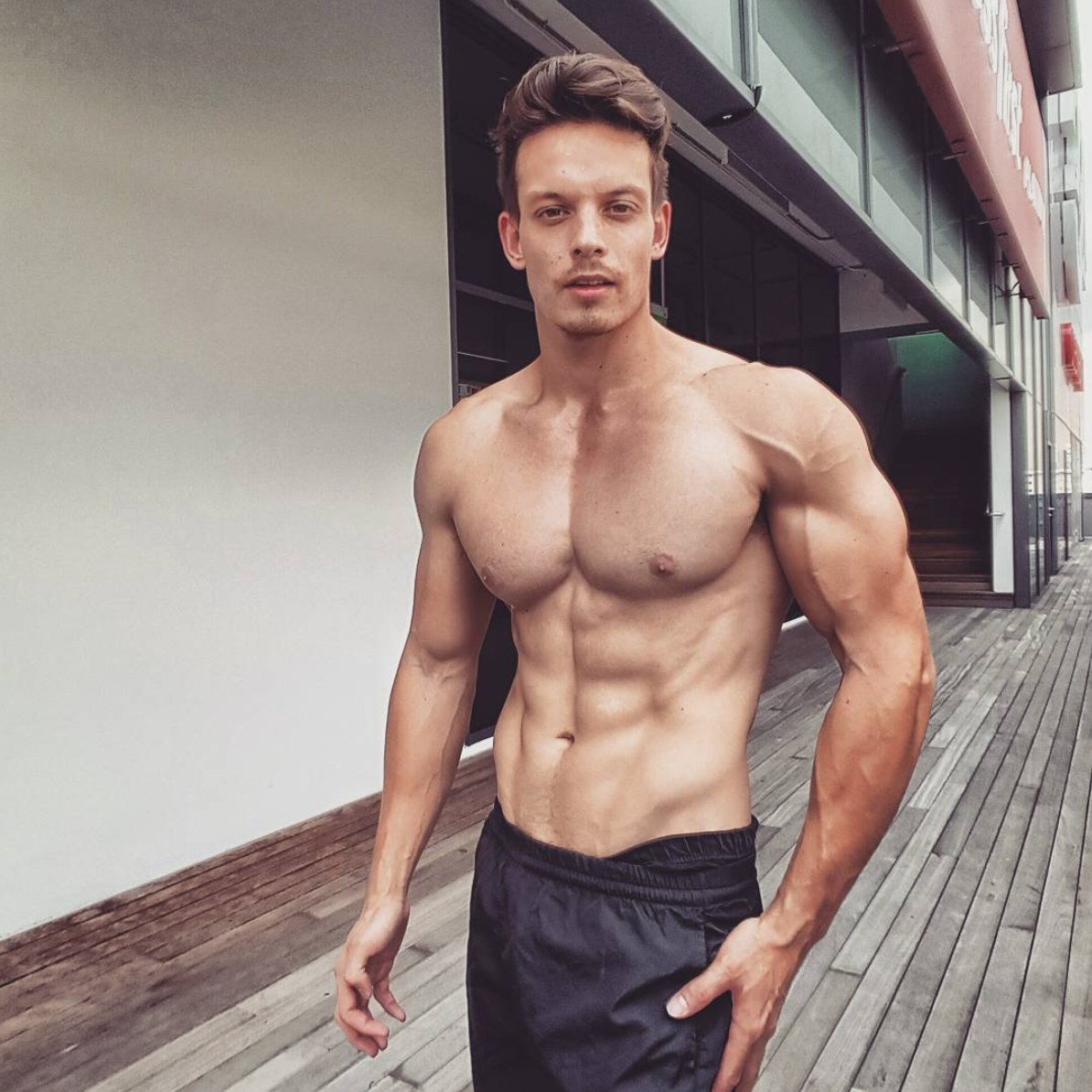 Once again, Dear Straight People would like to thank Luke Newton for sharing his story with us.

If you would like to keep up to date with how Luke is doing, you can connect with him through Instagram via @a1physiques. You can also book a FREE PT trial session with Luke via his official website.

Fitspiration Of The Week: Gerald Koh from Singapore

1 comments on “Fitspiration Of The Week: Luke Newton From Australia”