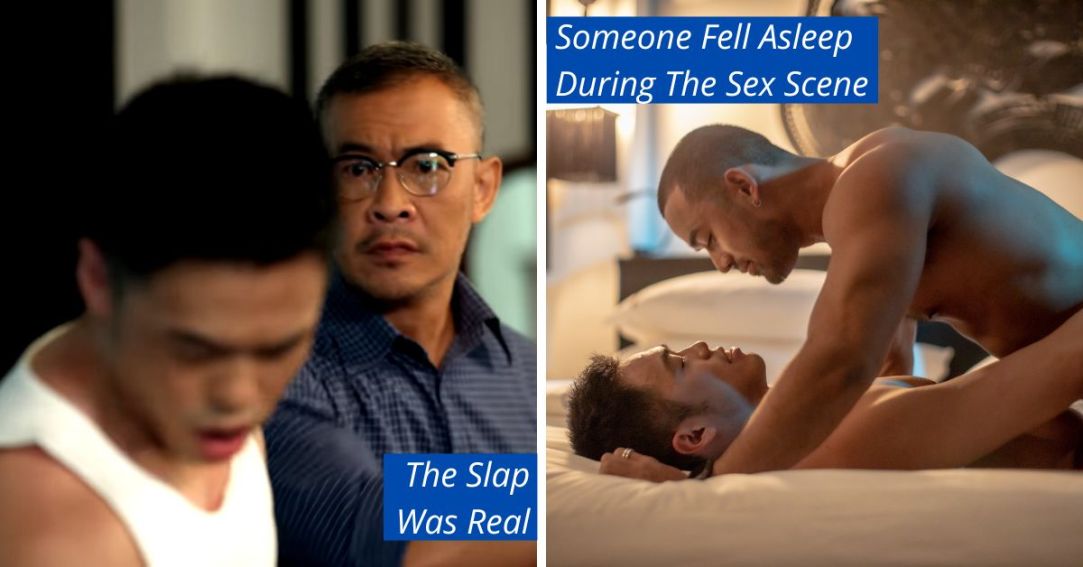 Comprising 5 episodes, ‘Getaway’ chronicles the highs and lows of Singaporean Sam, who jets off to Bangkok in search of his exiled gay uncle after his coming out to his conservative dad goes horribly wrong.

In Bangkok, Sam stumbles upon Top, a hopeless Thai romantic unlucky in love. Together, they search for Sam’s uncle but their search leads them to something more.

Based on an original story from a gay creator, Getaway sets itself apart from other BL dramas by boasting an openly gay director alongside an openly queer cast from Singapore and Thailand.

Getaway premiered to great success, earning numerous media features on Singaporean and international publications, a barrage of positive comments and over 900,000 views (and counting).

Here are 12 interesting facts about Getaway you might not know!

Warning: Mild spoilers for Getaway ahead!

1. The First & Last Scene Of Getaway Centers On Family In A Poetic Arc

One of the aims of ‘Getaway’ was to promote understanding of the issues that the LGBT+ community in Singapore faces.

For many Singaporeans, their biggest concerns when coming out is whether their family is going to accept them or not. As such, the theme of family features heavily in Getaway, since families play a pivotal role in Asian culture.

In Getaway, the first scene depicts an explosive coming out scene, where the Lim family is torn apart from the revealation of Sam’s sexuality.

In a poetic conclusion, the last scene shows the reconciliation of the entire Lim family, as the exiled gay uncle finally reconciles with his estranged brother.

2. The Slap In The Coming Out Scene Was Not Part Of The Script

The slap in the first episode was not originally part of the script!

It was only added after Steven David Lim jokingly suggested it.

Another fun fact: The slap was real! Steven did actually slap Sean in the scene.

3. The Entire Series Was Shot In 2 Days

Due to budget constraints, all 5 episodes of Getaway were shot in 2 days.

This meant that for many scenes, actors were only given a few takes to get it right – an incredible amount of pressure for the entire cast.

4. A Crew Member Fell Asleep During The Filming Of A Sex Scene

Due to a very tight timeline, the entire team shot for two consecutive days with very little breaks in between.

The very last scene that was filmed was the sex scene between Top and Sam. By then, the production crew was so exhausted that a crew member actually fell asleep standing, resulting in a loud crash that shocked the entire set.

5. Snooker Was The First Person Confirmed For Getaway

Snooker was the first cast member who signed up to be part of ‘Getaway’. The role of the charismatic Top was written specifically for him.

6. The Hotel Manager Is Played By The Actual General Manager Of The Siam

The main sponsor of Getaway is The Siam, a private urban luxury resort located in Bangkok’s Royal Dusit district that overlooks the Chao Phraya river.

The role of the hotel manager in Getaway is played by Nick Downing, the actual General Manager of The Siam. So if you decide to book a stay at The Siam, you might actually see Nick in person!

Gayhealth.sg is one of the supporting partners of ‘Getaway’.

Incidentally, Gayhealth.sg produced People Like Us, which made history as Singapore’s first gay web drama series. Raw, gritty and uncensored, People Like Us follows the lives of 4 gay Singaporeans as they navigate lust, love, and life.

Another fun fact: Steven David Lim is a cast member for both People Like Us and Getaway.

As part of its objective to showcase LGBT+ talents, Getaway boasts an openly gay director alongside a queer cast from Singapore and Thailand.

The first original song is ‘Welcome To My World’, performed by trans artist Zymone in the second episode. Not your average drag queen, Zymone is a singer who can actually sing live! She was an alumni of The Voice Thailand season 5.

The second original song is ‘Loved You So’, featured in the season finale of Getaway. Written and performed by Singaporean artist Lewis Loh, Lew previously appeared in Dear Straight People’s Out Of The Closet series

Getaway attracted a very international audience, which is unprecedented for a Singaporean YouTube production.

Getaway seemed to have struck a chord with the Spanish community in particular, as evidenced by the many Spanish comments on the episodes.

In fact, the Spanish and Italian subtitles are provided by volunteers, who wrote in wanting to provide subtitles for ‘Getaway’ so that they can share the series with their respective communities.

One theory for why Getaway attracted an international audience is because Getaway boasts an ensemble cast from Singapore and Thailand, and the contrasting accents in the series alone gave the show an international flavour.

10. The Getaway Team Got Invited To The Google And YouTube Office

The Getaway team scored an invite to the Google and YouTube office to speak about the importance of projects such as ‘Getaway’, which help to promote visibility, understanding and acceptance of the LGBT+ community in Singapore.

11. A Total Of 3 Scenes Were Cut From Getaway

Due to time constraints, a total of 3 scenes were cut from Getaway.

12. Singapore Sponsors Were Concerned About Legal Implications Of Supporting Getaway

While many Singaporean companies expressed interest in Getaway, many were concerned about the potential legal implications of supporting a project like Getaway.

This illustrates just how difficult it is for LGBT+ projects to get support and funding within Singapore, a by-product of anti-LGBT media censorship laws and Section 377A.

It’s challenging to be an LGBT+ filmmaker in Singapore to say the least.