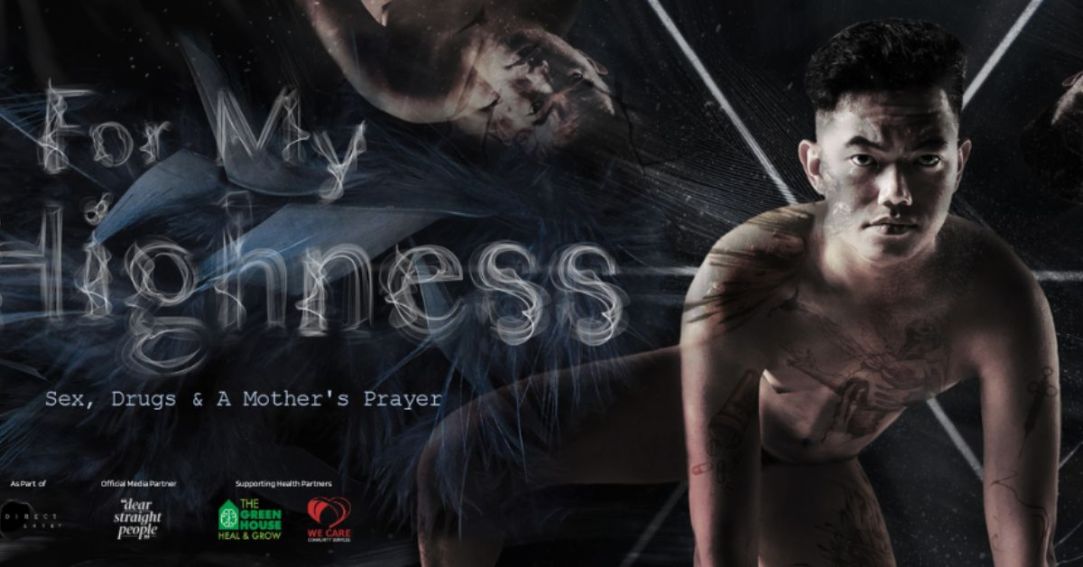 Toy Factory Made A Gay Play About Drug Addiction. Here’s Why.

In Singapore, positive LGBT+ media representation is restricted on mainstream media. Films portraying the LGBT+ community in a positive light often get slapped with higher ratings. In some cases, they are banned.

The authorities however, are not the only ones policing queer content. There are some in the LGBT+ community who take it upon themselves to do so.

The urge to be accepted has led to pressure to assimilate. Don’t perpetuate negative stereotypes. Don’t give the homophobes any ammo to use against us. In essence, stories involving the LGBT+ community should be as ‘straight-friendly’ as possible. Any creator who goes against these unspoken rules bear the risk of getting cancelled.

In spite of all this, Toy Factory Productions decided to produce a gay play chock-full of taboo topics.

Toy Factory has an upcoming gay play about drug addiction called For My Highness – Sex, Drugs & A Mother’s Prayer.

Calling the play bold would be an understatement. Not only does For My Highness centre around drug addiction, the story unfolds within the four walls of a gay sauna.. But that’s not all. The production does not shy away from sexual scenes between men.

Dear Straight People speaks to the playwright behind For My Highness to find out more about why Toy Factory is staging a play that deals with so many taboo topics.

Inspiration Behind For My Highness

Most artists draw from their own experiences. Some, like Taylor Swift, make a ton of money from doing so.

For My Highness isn’t autobiographical by any means. But it does come from a very personal place for Shaleihin Piee, the playwright behind For My Highness.

“I had a close friend who took his own life by overdosing himself – I think that really shook my world.

He and I look the same, and we share the same narratives – Malay Muslim, struggling with identity in Singapore as a closeted person, and similar age-ish.”

Experiencing the loss of a loved one is a life-changing experience. For Shaleihin, the death of his close friend shook his world.

“One thing I kept asking through the years was if drugs are supposed to be a form of escape, why did he still feel pain even in his highest of fantasies?

For My Highness is an exploration of how we find solace through our own (like it or not) forms of addiction.”

Setting For My Highness In A Gay Sauna

One of the most interesting aspects of For My Highness is that the story is set within a gay sauna.

For the uninitiated, a gay sauna is a place where men go to have sex with other men. The dress code there is generally underwear only. On certain nights, the theme is naked. Filled with dark corridors and private cubicles, it’s an environment designed to facilitate men’s most hedonistic desires.

It’s a setting you don’t normally see in the media. But Shaleihin chose to set a gay sauna as the backdrop of For My Highness.

“I personally wanted to show that although this place may be seen as a hyper-sexualised place for men seeking men to have sexual interactions/transactions, it also holds as a place of refuge for the broken too.

I think that in itself should speak volumes on how much we as a community are lacking space for LGBT people to seek shelter when they are down.”

More Than A Play About Gay Taboos

While taboo topics feature heavily in For My Highness, there are also wholesome themes at play. Chief among them is the topic of family.

“Writing the mother and son scenes is the most enjoyable for me.

Challenges Of Writing For My Highness

Writers often write about their own experiences because it is generally easier to do so. But in Shaleihin’s case, his perspective from a grieving friend proved to be the biggest challenge of all.

“Writing the scenes can be somewhat triggering.

If you were to ask me to write this play back in 2019 – it would be impossible because I’ll not be in the right frame of mind to do so.

Grappling with past trauma was not Shaleihin’s only challenge.

The protagonist of For My Highness is a Malay character. While Singapore needs more Malay media representation, making the lead Malay character a drug addict does raise some concerns.

“I did have some reservations – you know, like “Am I just perpetuating stereotypes”.

But I feel that as a Malay Muslim person, there is a universal message that is beyond the colour of my skin to share; Substance Use Disorder is a mental illness that doesn’t discriminate – it doesn’t care what race, income bracket or how high your education may be.”

The scarcity of positive LGBT+ media representation in Singapore has inadvertently created pressure on LGBT+ stories to be as straight-friendly as possible. This instinct to only tell wholesome stories however, clashes with aspects of gay culture that exist outside of heteronormative structures.

Whether we like to admit it or not, chemsex is a prevalent issue within the gay community. The more we try to sweep this issue under the rug, the more lives we lose.

“My intention in writing this play is to explore how we can grow more empathy for people who are trapped in this cycle of turmoil, and how we as a community can grow more spaces for them to seek recovery before it’s too late.”

It’s high time we stop telling stories that only pander to straight people. Stories like For My Highness are not just important. They are necessary.

“I feel that this play will serve a higher purpose.

That’s why I am very very thankful to have Supporting Health Partners; WE CARE Community Services, and The Greenhouse to be onboard to provide visibility of health options and useful information about Substance Use Disorder. And of course, trying to normalise that seeking help is okay.”

Set to hit the stage from 25 to 27 November, For My Highness promises a bold, sexy and psychedelic adventure. Beneath the gimmicky elements however, lies a story with heart.

“Underneath it all, it is a story between a mother and son, and their struggles to understand each other and their own placement in society.”

BUY ‘FOR MY HIGHNESS’ TICKETS HERE

Here are some resources for people struggling with substance abuse and addiction:

Dear Straight People is proud to be the Official Media Partner of Toy Factory Productions.