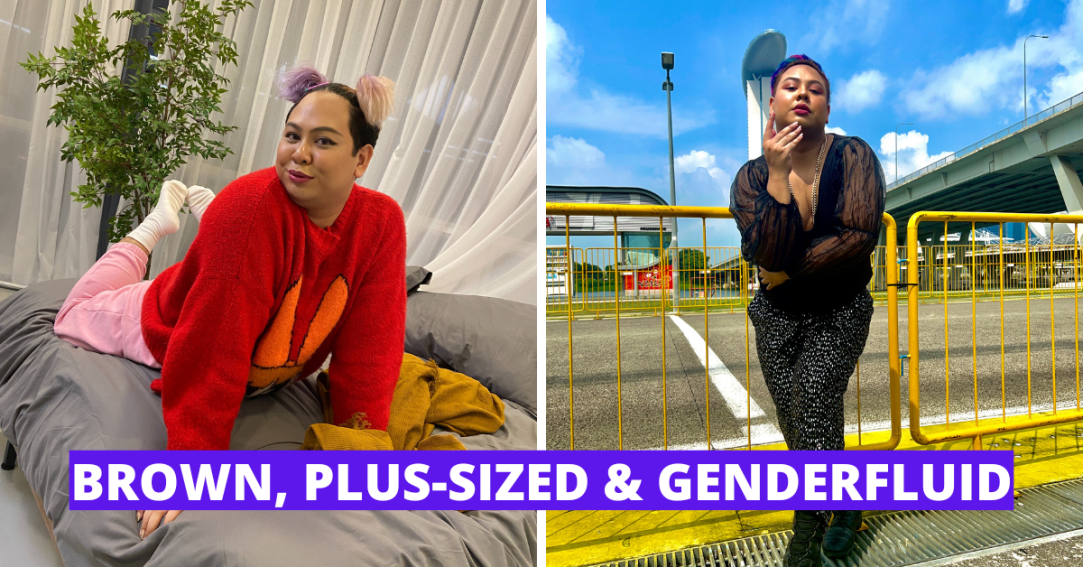 Out Of The Closet: Aiman Haikal Shares His Story

Brown, genderfluid and plus-sized, Aiman shares what it’s like to be a minority within a minority in Singapore.

Our next interviewee would never be caught dead without sporting a full-face of makeup. Out, loud, and proud, he is undoubtedly brimming with main character energy. But reaching this chapter of his story, where he is finally free to be himself, was hard earned.

And now that he’s stepped out of the shadows, he never wants to go back.

Section 377A may be repealed. But the stigma against the LGBTQ+ community remains. In Singapore, to be ‘out’ in the media would be the equivalent of career suicide. But that hasn’t stopped Aiman from bravely pursuing a career in showbiz.

Aiman first got his start at Night Owl Cinematics. But he has since gone on to establish a promising media career as a host, talent and content creator.

As one of Singapore’s few openly queer personalities, Aiman has embraced the spotlight as a role model for queer Singaporean youths. As a minority within a minority, he represents a symbol of hope for LGBTQ+ people who struggle to fit conventional norms.

“Most people pick one struggle. But for me, I’m gay, Malay, fat, AND I wear makeup.”

Looking at Aiman’s history, it’s no wonder he remains committed to be unabashedly himself.

BEING FORCED INTO CONVERSION THERAPY

At age 20, Aiman chose to come out to his mother following the death of his close uncle.

“I couldn’t risk losing her without her knowing who I was.”

Unfortunately, his mother did not take it well. She broke down crying.

Aiman’s mother sent him to undergo conversion therapy twice every week. Each session lasted around 2 to 3 hours. He was told to continuously pray his thoughts away, lest he condemn his family to hell with his homosexuality.

“It messed with my mind a little bit. When you have people telling you what you’re not and what you should be, it kind of broke me a bit.”

It wasn’t long until the damage started showing. Aiman began seeing and hearing things that didn’t exist, experiencing a panic attack whenever he went outside. He eventually resorted to self-harming, explaining, “There was so much pain inside. I had to translate it outside to understand it better.”

Upon discovering the self-inflicted wounds, Aiman was referred to the Institute Of Mental Health (IMH), where he was diagnosed with schizophrenia and anxiety. It was during that time that Aiman began toying with suicidal thoughts.

For the next few years, Aiman attempted to medicate the pain away. But his efforts proved futile.

He learnt from his doctors that at the end of the day, medication can only be a coping mechanism—never the solution.

“You just have to fight through it and learn to overcome all these traumas, to work through the issues you have.”

It took Aiman another three years to finally come out of that dark space. No longer dependent on medication, Aiman can now live life to the fullest.

THE AFTERMATH OF COMING OUT

Having weathered a tumultuous road to recovery, Aiman continues to contend with the ripple effects of openly claiming his sexuality on multiple fronts in his life.

Aiman has a complex relationship with Islamism, a by-product of the trauma he faced as a result of conversion therapy.

“I find it hard to be Muslim because of the journey I’ve been through. I find it more important to focus on getting myself back on the right track and be happy again…Religion has never been a big priority for me.”

At first, Aiman and his mother could not see eye to eye. Things came to a head during an overseas family trip. His mother asked about the partners of his heterosexual siblings, before turning to Aiman to tell him she didn’t want to know anything about him.

“I was like, What do you mean? I think that really broke me, because…she’s my mother.”

On a bus ride home, Aiman confronted her and asked if she wanted him in her life.

“At this point, if I have to move out to be who I am, then I will do it. Because I don’t want to wait until you die before I can live my life.”

Initially, Aiman’s mum didn’t give a response. The next morning, his mother asked what he expected from her. He replied, “I don’t expect you to accept the homosexual lifestyle, but to accept me as your son.. If I do have a partner, I need you to recognise him as my partner and I love him and treat him the same as my sister’s partner.”

Fast forward to today and Aiman’s relationship with his mum has improved considerably. Though she’s still unsure of how to react at times, Aiman acknowledges that she is trying her best.

BEING GENDERFLUID IN SINGAPORE

Aiman is genderfluid, meaning he is comfortable with being referred to by any pronoun.

But Singapore is not the most friendly environment for genderfluid people. One of the biggest struggles that Aiman faces is with regards to public bathrooms.

Once, while touching up his makeup in the men’s bathroom, an uncle aggressively flicked water at Aiman’s face before leaving—one of many unprovoked attacks Aiman has faced over the years. But he has since learnt to brush off these encounters. Now, Aiman often uses the handicapped stall to avoid abuse.

“When they see a man in full-face glam and colourful hair like me, they think, What is this thing doing in the boys’ toilet? I try to understand as much as I can, but it doesn’t feel good sometimes, especially when I’m having an off day.”

But Aiman doesn’t just face discrimination from outsiders. Discrimination is rife within the gay community too. He has lost count of the number of times he has seen ‘No Malays or Indians’ or ‘No fats and fems’ on Grindr.

“If nobody bats an eye,we’re saying that it’s okay to cut people out of an entire community based on their race. As gay people, this makes it harder for us to learn how to love ourselves.

Most people will find extreme ways to change themselves, from getting plastic surgery to going on harmful diets just to fit in. I think that’s very sad.”

THE POWER OF OWNING A PLATFORM

Nevertheless, Aiman is heartened to see progress over the years. He recounts times where he has been invited by girls into the ladies’ bathroom to help them touch up their makeup, and has even met aunties who have complimented how pretty he is.

“There are laws to protect LGBT community against violence; small things that will add up in the future. It’s slow, it’s slow, but at least it’s happening. So to me, there’s hope.”

With almost 30,000 followers across Instagram and Tik Tok, Aiman hopes to use his platform to normalise alternative gender expression. This is why he insists on filming every single video with makeup on.

“A lot of secondary school kids who grew up watching me, tell me they don’t feel uncomfortable now seeing men on the street wearing makeup.”

I just want to show people who look like me that they can still be successful. I think that’s been my main goal. Be exactly what society tells you not to look like, and still make money.”

Aiman’s career is only just beginning. After his long tenure at Night Owl Cinematics, Aiman is now part of the roster at The Dishonoured Pockets, whose other talents include the likes of Xinde Yap and Titus Low.

Recently, Aiman had a career breakthrough when he was cast in the lead role of Dear Straight People’s gay short film ‘Home Par’. A dramedy on gay party culture, Home Par has already racked up around 20,000 views within a month of its release.

In the future, Aiman hopes to take on more collaborations, livestream more gaming content and pick up more acting gigs.

But this year, of course, should not just be about hustling. Amidst today’s bustling climate, Aiman also wants to remind everyone to take time to be kinder to ourselves.

Once again, Dear Straight People would like to thank Aiman Haikal for sharing his story with us.

If you would like to keep up to date with how Aiman is doing, you can connect with Aiman on Instagram (@aimanomg) and Tik Tok (@aimanomg)

2 comments on “Out Of The Closet: Aiman Haikal Shares His Story”