Since homosexuality isn’t natural, this implies that all those claims made by the gay community that it is something that they are born with are obviously just blatant lies. All those evil gay people are such good liars they probably managed to convince themselves that they are right!

But wait a second, isn’t homosexuality observed in almost every animal species on Earth?

Yes, you read that correctly. Animals love to get it on with members of the same sex too! In fact, it has been claimed by some zoologists that same-sex activities accounts for 94% of all observed sexual activities in giraffes!

But no, no, no that can’t be right! How can such absurd facts be true! Those zoologists were probably sleeping on the job and got the genders of the animals they were studying all mixed up. So yes straight people, your argument is totally still valid. Since homosexuality is completely unnatural, it is a choice because gay people are just really good liars and zoologists don’t know what they are talking about.

I mean, when you think about it, it is pretty obvious why gay people would choose to be gay right?

Firstly, because gay people can’t really flirt in public due to all that homophobia floating around, they are all forced to use online dating services. And we all know just how fun online dating is. I mean, wouldn’t we all love to have online conversations with creepy netizens like the one shown below? 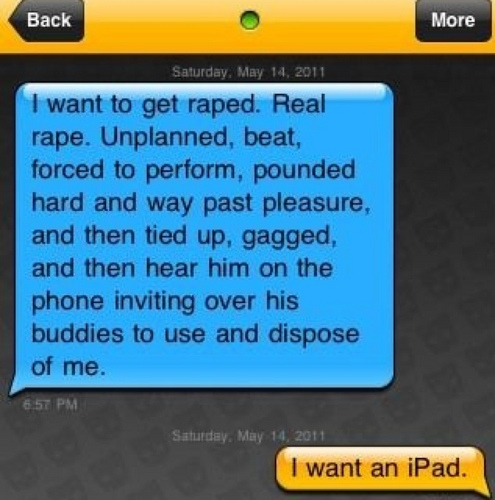 I mean, how hilarious is that?! No wonder Grindr is so popular! This totally explains why people would choose to be gay now.

But that’s not all folks.

Another reason someone might choose to be gay is because they just want the attention! You see, if you’re gay, you automatically get flooded with attention. Your parents are going to be hounding you everyday to turn straight. Your friends are always going to be making jokes about your sexuality. If you’re lucky, you might even get disowned by your parents and ostracised by your friends so you get to have a really cool sob story to tell strangers who will all shower you with heaps of pity and attention!

If you’re really lucky, you might even get on the cover of Vanity Fair like Caitlyn Jenner did!

So yes, straight people were right all along, homosexuality is totally a choice! If any of you straight people reading this are interested in becoming gay too, please dial 1800-6-9-6-9

Move Over Homophobia, It’s Time To Talk About Biphobia Instead!

5 Of The Most Horrifying Cures For Homosexuality Ever Used

4 comments on “Ok Fine, Homosexuality Is Totally A Choice!”