How Connor And Oliver Gave Me Serious Gay Relationship Goals!

It seems like every new American TV show nowadays has a token gay couple but one couple in particular stands out to me.

I’ve been hooked onto the ABC hit series ‘How To Get Away With Murder’ ever since it premiered and one of my favourite things about the show is the relationship between Connor Walsh (Jack Falahee) and Oliver Hampton (Conrad Ricamora). Or simply also known as just ‘Coliver’. If you haven’t watched the series yet, PLEASE STOP READING now because there are some spoilers ahead!

Ok, now that I’ve got that disclaimer out of the way, I can get back to talking about my favourite TV couple. So while Coliver got off to a rocky start with Connor pretty much just manipulating Oliver to his advantage, their love story eventually panned out nicely and is starting to give me some serious #RelationshipGoals!

And here is why:

Their relationship started to amount to more than just sex

And before we knew it, bad boy Connor actually developed major feels for Oliver!

And they became the cutest gay couple on TV

They even ended up moving in together! 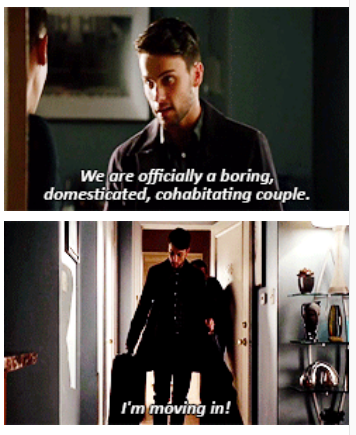 And having all these adorable couple moments

But despite all of their ordeals, they still chose to stick together

And make the best of whatever circumstances they find themselves in

And really, regardless of what your sexuality is, that’s pretty much what we all want in a relationship

Plus, they seem pretty tight offscreen too so that’s kinda cool!

P.S: I swear if the writers cut Oliver from the show, somebody is going to get hurt!