I’m sure most of you will agree that Grindr needs a couple of  improvements. I mean sure, Grindr isn’t exactly a bad dating app, but it definitely isn’t the best either. Here are 8 suggested new Grindr features that we all need right now!

I don’t consider myself a grammar nazi but I’ve had enough of receiving messages filled with grammatical errors like the one below.

Seriously, what in the world is this dude trying to say?! It’s people like ‘Gam’ that makes it imperative that Grindr implement a grammar check feature immediately! Seriously, Grindr needs to get in touch with someone from the Microsoft team right now!

Since we are on the topic of grammar, we might as well address the issue of how so many gay men can’t seem to spell! Men like the dude below definitely need a spell-check feature! 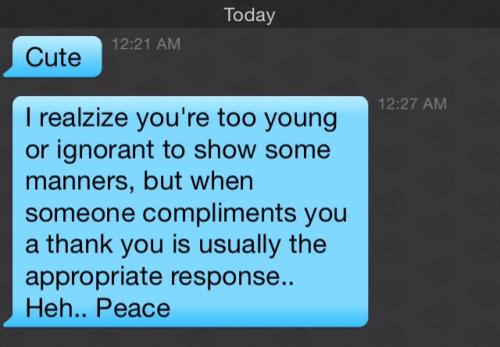 Remember the good old days of Friendster when people used to write testimonials for each other? Wouldn’t it be so cool if we could do the same thing on Grindr? This way, we will know that the profile we’re talking to isn’t an impostor or a robot.

I am honestly sick and tired of talking to inanimate objects, picturesque settings and headless torsos. Just like the headless torso below, I too am a massive fan of faces! 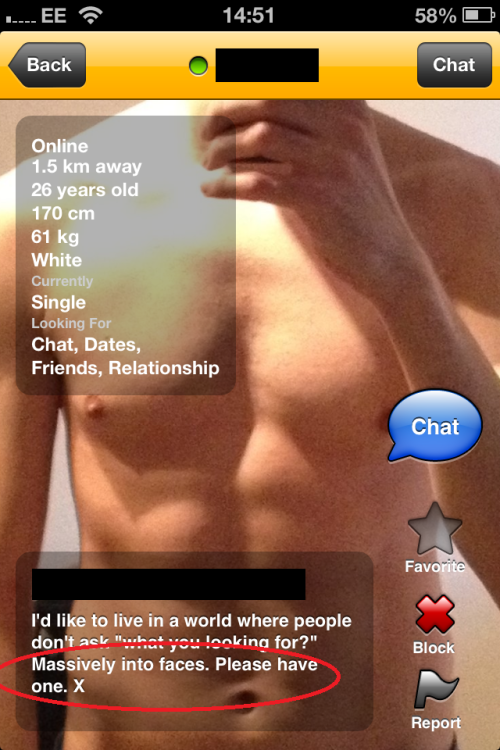 So Grindr needs to implement that facial recognition app that Facebook has and if it can’t detect a human face, then we should have the option of automatically filtering out those headless torsos.

We currently live in a society whereby almost everything is getting reviewed. With that in mind, I think it’s time we start to review other people too! Grindr needs to introduce a review option. This way,  we can all save a lot of time and effort by checking out the reviews of other guys first before deciding if we want to get to know them better.

An example of a Grindr review could go something like this:

Hotboy92 doesn’t seem to be capable of forming a complete sentence. His messages are always only one word long and his vocabulary seems to be limited to words like ‘Hi’, ‘Seek’, ‘Host’, ‘Now’, ‘Bottom’ etc. If his lack of personality doesn’t bother you, just be mindful of the fact that he is so dead in bed you might actually start to wonder after some time if you’ve somehow managed to kill him with all of your thrusting.

Hashtags are all the rage right now. They can be found in pretty much every social media platform and have even somehow managed to find themselves into a Mariah Carey song (#Beautiful)! So I think it’s time they find themselves to Grindr as well. Like for example, if you wanted a massage, you could just use the hashtag #masseur and boom a whole bunch of Grindr profiles belonging to masseurs would appear instantly. Now wouldn’t that be awesome?

The high number of ugly profile pictures on Grindr supports the notion of introducing a Grindr filter feature! Think of how prettier our Grindr home page would look like if everyone was able to apply a valencia filter to their selfie?

Grindr should take a leaf out of LinkedIn’s book and implement an endorsement feature. For all of you not on LinkedIn, a LinkedIn endorsement looks like this:

A Grindr endorsement however, will probably look something like this: