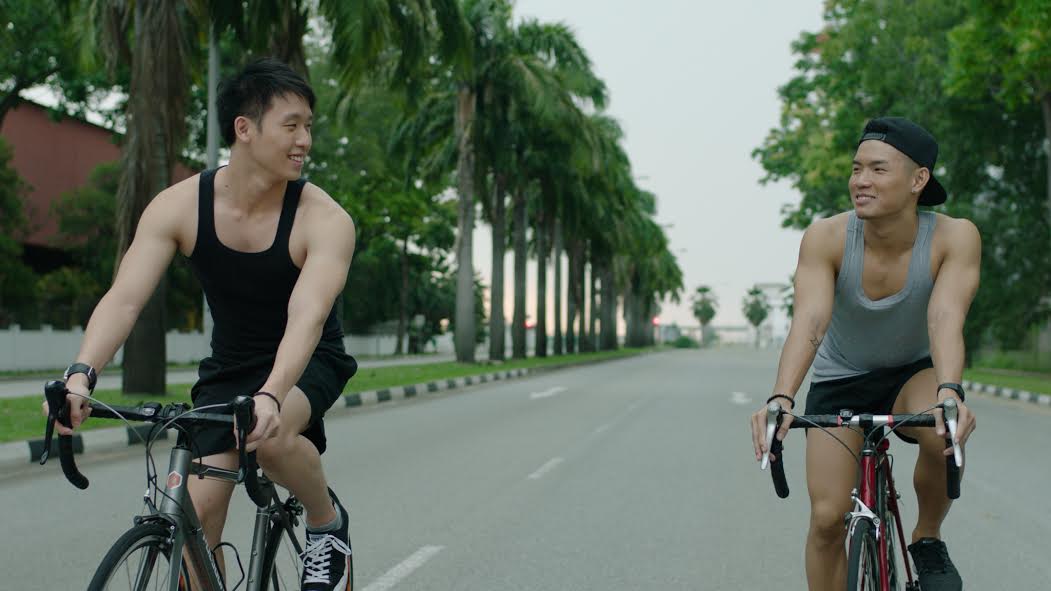 Do you know what’s the biggest lie about love?

It’s that ‘Love conquers all‘. Or at least, that seems to be the general consensus in the gay community.

The notion that gay relationships don’t last long is a stereotype that ‘pro-family’ homophobes seem to be particularly fond of. And while there are plenty of examples of long-lasting gay relationships, it’s hard not to ignore the amount of cheating-induced drama that goes on in the gay scene.

It’s a touchy subject that gay activists often try to shove under the carpet. But budding Singaporean filmmaker Kieran Cheang is determined to shove this issue into the public spotlight with his directorial debut ‘HURT’.

A labour of love that Kieran took months to get off the ground, this 11-minute short film deals with the aftermath of love’s greatest betrayal – infidelity

I was fascinated with the idea of trying, and the kind of motivation behind one trying to keep the ship afloat.

Starring first-time actors Clarence Lee and Lokies Khan as the film’s protagonists, the film kicks off with a steamy sex scene between Clarence’s character and his unnamed Grindr hook-up.
What follows is a lot of drama. A lot of tears. And ultimately, the question of how far the gay couple is willing to go to keep their relationship afloat.
It’s an interesting premise. One that hasn’t really been explored in Singapore’s film industry. And gay or straight, it’s an issue that a lot of couples would be able to relate to.
Currently in the midst of preparing for the film’s launch, Kieran has kindly taken time out of his busy schedule to tell us more about ‘HURT’.
1. What’s the story behind ‘Hurt’?

“Hurt” is a love note to my soulmate; the singularity in my life; the one who sticks by me tirelessly despite all the shenanigans that I’ve done.
The story is, more than anything, about the generosity that love brings. It’s about taking the treacherous journey of building an enduring relationship; and no love is easy.

2. What was the toughest thing about bringing ‘Hurt’ to life?

Getting the people together.
I remember sitting outside my house, tearing the script up one evening because no one would believe this story. I was devastated because I knew no one was gonna believe that I could pull this off.
That night I gave myself an ultimatum: I reached out to Joshua Simon – and I told him about this crazy idea that I have, and almost instantly he agreed to writing an original song for it. And I managed to persuade David to be my DP, and to co-direct it.
I was really ecstatic when the project was going somewhere.

3. What was the best part about the whole production process?

The toughest part was also the best part. Getting people together.
Clarence said this to me right after we wrapped. “Kieran, I’m very thankful that you pushed for this film to be made. You’ve created a space where we can all be ourselves and not be afraid of judgement.”
I almost teared because I thought I wasn’t quite sure about the impact I made.

4. What kind of impact are you hoping to achieve with ‘Hurt’?

I have this radical dream – I want this film to be the go-to visual when two people in love get into a huge fight, before deciding whether or not to break or mend their relationship.
Okay, that may be too far fetched.
Realistically, I hope that people enjoy this film as it is, and ponder about two themes: responsibility of our actions, and the significance of shared memories as a deciding factor of love.
This film shouldn’t act as a reference for them to act, but to think about their own relationships and the important memories that they share with their partners.

5. Why should people watch ‘Hurt’?

One hot guy is cheating on his other hot boyfriend. That’s good enough reason for you to watch it.

6. What’s your next film project after ‘Hurt’?

I went to Vietnam recently and was quite intrigued by the sex workers in a gay sauna who’re actually heterosexual. That’s a story idea that I’m conceptualising at the moment!

I will forever be grateful to everyone who helped me realise this vision. And now I’m happy to share it!

Why Open Relationships Are Common Among Gay Men

Meet Kim Ho: Star Of The Viral Heartwarming Gay Video About Falling For Your Best Friend