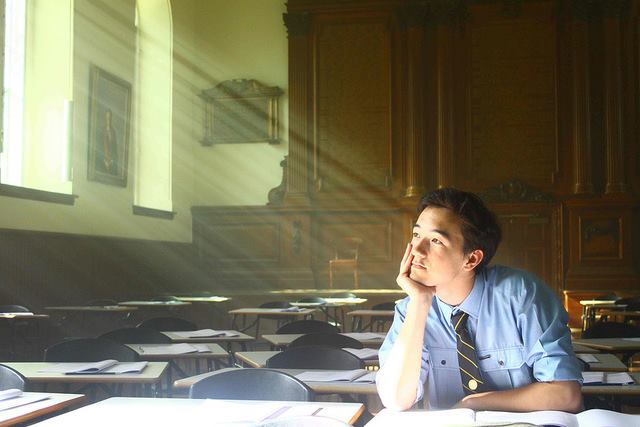 Meet Kim Ho: Star Of The Viral Heartwarming Gay Video About Falling For Your Best Friend

When Kim was just 17, he already achieved more than what most of us could only dream of achieving in our lifetime. His gay short film about falling for your best friend has gone viral worldwide, chalking up award after award and garnering acclaim from celebrities like Ellen Degeneres, Dannii Minogue and Stephen Fry.

It may have been 3 years since the film was released, but its beautifully honest message about young gay love remains relevant up till today, especially in Singapore where consensual sex between men remains a criminal offence. 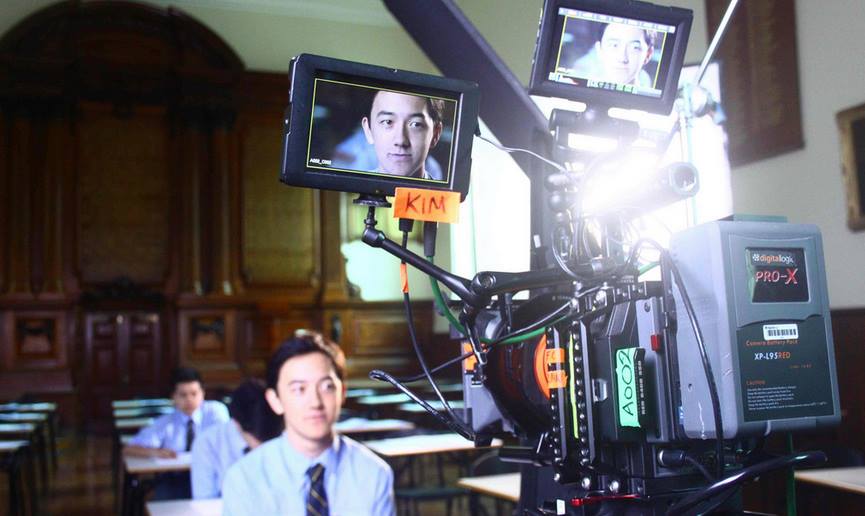 Born and bred in Sydney, a monologue that Kim wrote for an online writing competition won him an opportunity to develop it into the  groundbreaking short film we know today as ‘The Language Of Love’.

Perfectly capturing the essence of how it’s like for young gay teenagers grappling with their sexuality, this 10-minute long short film was the result of him being asked to develop a monologue about love.

I think something in me just went, “There are so many stories about heterosexual courtship. That’s fine, but I want to do something different.”

It was about bringing to light teenage sexuality, showing that every day, sensitive young men all around the world are discovering or admitting to themselves for the first time that they’re gay 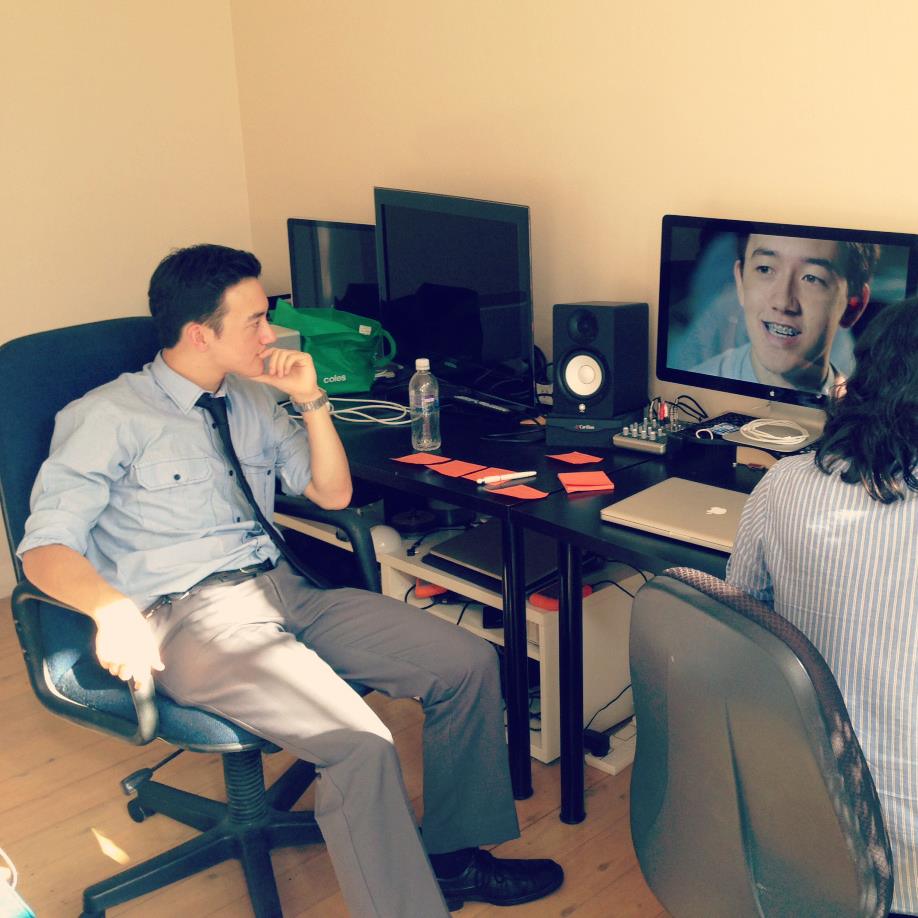 The tendency when writing LGBTI+ stories I think, is that you focus on ‘gay issues’ rather than the people affected by them, and your writing becomes didactic rather than heartfelt.

It took time for me to make sure the story would be heartfelt and warm.

His beautifully heartfelt piece resonated with audiences worldwide, racking up over half a million views on YouTube. And Kim is finally bringing his world famous film to audiences in Singapore with our exclusive interview with this rising star. 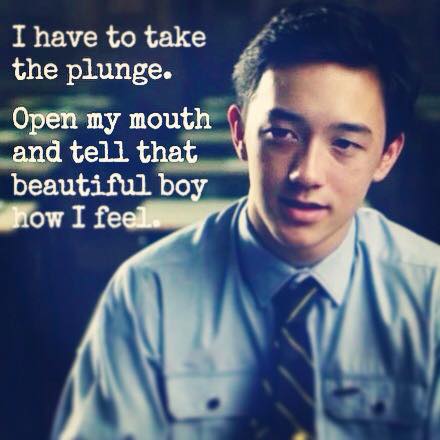 1. What is the story behind ‘The Language Of Love’?

The Language of Love is ten minutes of a teenage boy’s inner monologue.

Whilst doing a French exam, Charlie’s mind wanders and he gradually realises he has feelings for his best friend, Sam. He suddenly has to grapple with his sexuality, and what’s at stake if he decides to tell Sam how he feels.

2. Why did you make Sam white? Was it a subtle hint at the sexual racism that is prevalent in the gay scene in Australia?

We cast the other actors in the film quite quickly – it was really just me asking my friends if they wanted to be in the film. In a way, the casting process was colourblind, for we cast a diverse range of people who wanted to take part.

3. The response to your short film so far has been absolutely phenomenal. How was it like for you winning praise from international celebrities like Ellen Degeneres and Stephen Fry?

We absolutely did not expect the film to get so much exposure. We had so many amazing responses to the film, with people identifying with Charlie and his journey, sharing their own experiences and – to use a clichéd phrase – spreading the love.

Having high-profile members of the LGBTI+ community like Stephen and Ellen support the film was amazing but I think it was those YouTube comments that really got to me. Knowing I’ve made a positive impact in a stranger’s life, that in my own small way I’ve helped make the world a kinder place, that’s my proudest achievement.

4. You have intentionally kept silent with regards to public scrutiny over your sexuality. Why is that so?

Initially, I stayed quiet because I felt that if someone saw the film and went, “Wow that kid’s so brave to write an autobiographical piece like that”, it fails to appreciate my work as a writer in crafting characters. As an artist, it was a bit demoralising when people automatically assumed the film was only a transcript of my personal experiences.

But I started thinking why people were doing that – why people were so quick to label me as a queer writer. And I discovered there was a lot of power in withholding that information, keeping people speculating, refusing to be easily categorised. Sexuality shouldn’t matter; people should be free to love who they want to love.

So I felt that trying to determine my sexuality missed the whole point of the film.

5. It’s been 3 years since The Language Of Love was released but you haven’t stopped promoting it. What drives you to continue promoting this project?

Unfortunately, the world still has so much toxic homophobia; the Orlando shooting this year was a devastating reminder of this. Right now Australia is gearing up for a $160 million plebiscite on same-sex marriage which will, if it goes ahead, result in homophobic smear campaigns. And of course, homosexuals are discriminated against in Singapore.

What drives my director Laura Scrivano, producer Dan Prichard and I to continue promoting the film is both a grim acknowledgment of how devastatingly relevant it still is, and a belief in its capacity to offer love and laughter as an alternative to fear and hatred.

6. Why should Singaporeans watch ‘The Language Of Love’?

Hopefully the same reasons why anyone else would – because it may help in a small way to erode a deep-seated homophobia in our communities.

I have family in Singapore and try to visit regularly. It’s an extraordinary country that holds a place in my heart, but it’s not perfect. I believe creating more equity for LGBTI+ citizens will only strengthen Singapore, making it a more accepting and richly diverse place.

7. What film project are you working on next?

Right now I’m actually working on a trans-lingual play about a real-life phenomenon, whereby Singaporean, Chinese and Taiwanese tourists are coming to visit a salt lake in the middle of the Australian outback.

The culture clashes it creates have been so interesting and I’m working on crafting a theatre piece that demonstrates both the beauty and complexity of multiculturalism.

8. What’s something interesting about the film that you haven’t told any journalists yet?

We shot the film over a marathon eleven-hour day: the first and very last bits in the morning, the bits with just Charlie in the afternoon.

Just after lunchtime, it was pointed out to me that a zit had developed on my chin, which would be really conspicuous on film. So I had to burst a zit in the name of art, and cover it up with makeup, otherwise it would’ve just suddenly appeared halfway through the film.

Just that I’m extremely excited to have Singaporeans see my film ! It means so much to see support and solidarity from around the world, and to get inspired by all the amazing people, organisations, festivals, groups and publications working towards equality.

Watch ‘The Language Of Love’ here:

Once again, we would like to thank Kim for doing the interview. You can find out more about the film here.

Out Of The Closet: Anthony Leong Shares His Story