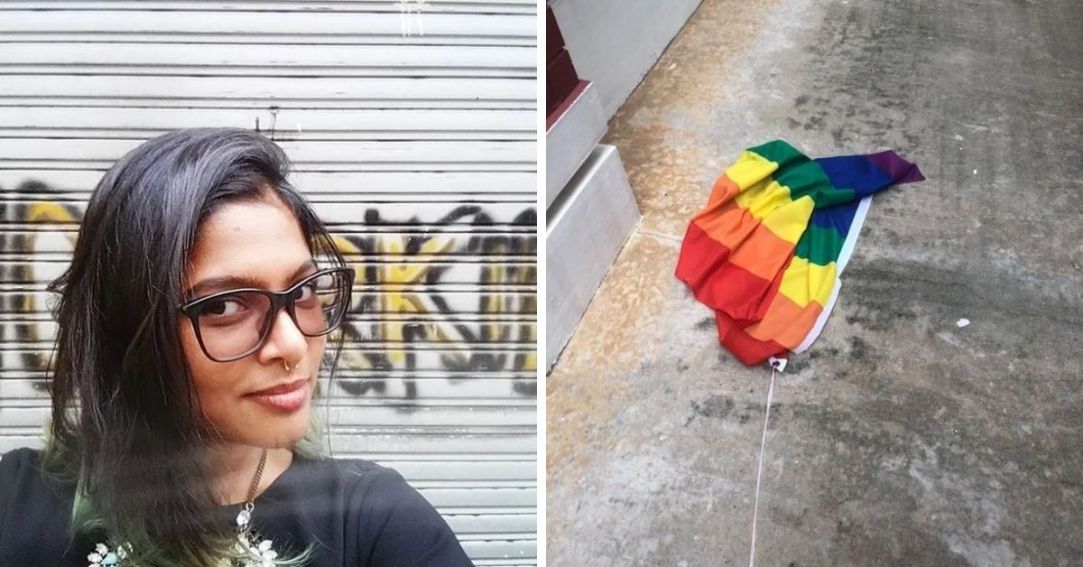 Queer Singaporean Sheni Nedumaran was investigated by the police for hanging up a Pride Flag, then had her Pride flag ripped off her window by vandals.

I was alerted to this upsetting case of bigotry, when I chanced across the IG stories of Sheni, a former feature of Dear Straight People’s Out Of The Closet series.

On 1 June, 33-year old Singaporean Sheni Nedumaran hung up a Pride flag at her home to mark the start of Pride Month.

Pride Month refers to the month long celebration of the LGBTQ+ community that takes place globally throughout the month of June.

Part 1: Being Investigated By The Police

On 21 June, the SPF (Singapore Police Force) stopped by her home to investigate a complaint from a neighbour about her Pride Flag. Despite the fact that it was clear that hanging a Pride Flag was not illegal, the police insisted that they were still required to ‘advise’ her that there had been a complaint.

When Sheni questioned the police on whether they advised the neighbour that there is nothing to investigate since nothing illegal happened, the police responded that they cannot tell the complainant what to do.

The police then went on to take down her personal details such as her NRIC, even though it was clear she did nothing wrong.

Part 2: Getting Her Pride Flag Ripped Off

On 29 June while working from home, Sheni was startled when she heard a loud bang. She then discovered that vandals had ripped her Pride Flag off her window.

She went to hang it back up again. But not long after, someone ripped her Pride Flag off her window again.

Sheni did not manage to see the vandals who ripped her Pride Flag off, since they ran away like cowards after doing their dirty deed.

Sheni has filed a police report against the vandals who ripped her pride flag off her window.

We hope the Singapore Police Force will investigate this case seriously and bring the vandals to justice.