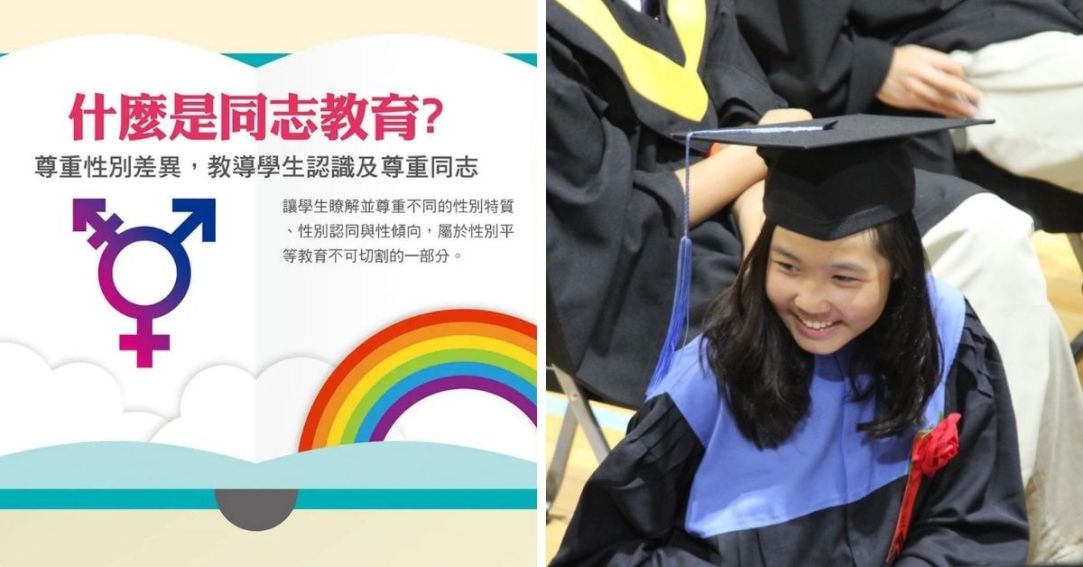 I’m a Singaporean Who Went Through LGBTQ+ Inclusive Sex Ed in Taiwan, Here’s How It Was Like

Earlier this year, a viral reddit post exemplified the extent to which Singapore’s education system is increasingly lagging behind in the needs of the LGBTQ+ community.

The resulting #FixSchoolsNotStudents movement soon came forth, culminating in a protest outside the Ministry of Education (MOE) headquarters alongside an outburst of social media posts and online petitions speaking out against the education system’s lack of LGBTQ+ protection and accommodation.

In a country where such protests are illegal (and or confined to an annual pride event fenced up in a tiny park), the movement was not just unprecedented, it was shocking.

#FixSchoolsNotStudents, however, is just the tip of the iceberg. It is a wake-up call that Singapore’s education system needs to step up its game in order to safeguard its LGBTQ+ youth and provide them with the safe learning environment they need.

As a Singaporean who went through LGBTQ+ inclusive sex education in Taiwan, I hope that sharing my experience will shed light on the importance of LGBTQ+ coverage in schools, especially within the context of Singapore.

My name is Natalie and I am a Singaporean who has lived in Taiwan most of my life.

Taiwan is known by the international LGBTQ+ community to be a country of thriving queer culture and equal rights; with its legalization of same-sex marriage back in 2019, Taiwan became the first country in Asia to pass marriage equality.

Today, Taiwan is widely recognised as a token of LGBTQ+ pride in Asia, and their queer affirmative stance extends to their education system too.

Though my educational status doesn’t necessarily follow the curriculum designed by Taiwan’s MOE, the country’s allyship and recognition of LGBTQ+ inclusive education has nonetheless influenced my exposure to such topics in school: the general coterie of teachers don’t shy away from topics concerning gay and trans rights, many of them even openly express their affirmation and support towards LGBTQ+ representation and equality.

From the history of the Stonewall Riots to Taiwan’s referendum on marriage equality, LGBTQ+ current events and topics are not just discussed in classrooms, they’re celebrated too.

With the establishment of Taiwan’s Gender Equity Education Act back in the early 2000s, the landmark act provisions to ‘promote substantive gender equality, eliminate gender discrimination, uphold human dignity, and improve and establish education resources and environment of gender equality.’

Since kindergarten, children are taught and encouraged to break gender stereotypes with many educational facilities even ridding traditional gender norms through gender-neutral toys and classroom roles. And throughout the course of middle and high school, the subject of gender diversity and sexual orientation becomes a topic brought out in health and social science classes – textbooks even highlight the fluidity and spectrum of gender identity, gender expression, biological sex, and sexual orientation.

By promoting exposure to queer resources and disallowing homophobic and transphobic discrimination by educators, Taiwan’s public education sector stands as one of the country’s most critical resources for LGBTQ+ teens in Taiwan.

It has also become the country’s first step towards a new generation of cultural acceptance and equal rights.

My Experience with LGBTQ+ Inclusive Sex Education in Taiwan

Considering how most of us are raised in a relatively conventional family structure and or strict religious institutions, most teachers are well aware that misinformation surrounding LGBTQ+ topics are prevalent.

One memorable lesson was when our class was assigned a biology group project. Each group member had to research a specific topic ranging from gender and sexuality to STDs and contraception. At the end of our research process, our goal as a group was to formulate a letter for a hypothetical son of ours in an effort to guide him through the possible pitfalls of puberty and self-discovery.

Apart from offering practical advice surrounding matters of sexual health (like getting tested for STDs and using protection regardless of it being homosexual or heterosexual intercourse), this assignment also underscored etiquette as well as sensitivity and respect when facing trans or non-binary people with possible body or gender dysphoria.

We were also lectured on the importance of respect, regardless of conflict upon opinions, and briefed about the sociopolitical struggles that still exist today for queer people in Taiwan.

Throughout the course of the project, classroom discussions became the first time I’ve ever openly discussed LGBTQ+ topics with my peers, and looking back, it was possibly one of the most important conversations I’ve had in my life.

This class wasn’t just an introduction to the biology of human sexuality. It was the words of acceptance and validation many of us needed, but dared not ask for. It was a safe space that normalized questions and conversations surrounding LGBTQ+ sexual health, and a class that has since opened outlets of further discussion and answers for queer youth in and out of the classroom.

How Singapore’s Sex Ed Can Learn From Taiwan

As a high schooler still in the ripe years of self-exploration and discovery, my upbringing in Taiwan is very much a privilege, and one that has shaped my perspective of the world today.

My identity as a Singaporean has made me rethink and appreciate the fair opportunities around me, which I consider a blessing, but at the same time, reflects the depressing reality my Singaporean peers face.

As part of Taiwan’s legislation, teachers are provisioned to provide support and protection to kids struggling with issues of sexuality and gender identity. Youths are educated on issues surrounding gender fluidity and sexual orientation, while teachers and counselors remain consciously aware of relevant discrimination and bullying.

LGBTQ+ pamphlets can be spotted outside the guidance counselor’s office, while some teachers even go out of their way to show support for the queer students through sharing personal experiences or wearing pride accessories.

This is not to say that homophobia and prejudice against queer people don’t exist among educators and students in Taiwan as there’s still much to be done. But it does show just how far Taiwan is willing to go in order to make schools a safer space for all students.

In contrast, Singapore’s censorship on speech and media makes it borderline impossible for teachers to express overt support for the LGBTQ+ community. It simultaneously makes it difficult for queer youths in Singapore to seek out mental, emotional and or physical assistance.

Singapore’s LGBTQ+ Community Cannot Be Ignored In Schools Any Longer

The topic of mental health and general emotional well-being goes hand in hand with discussions concerning Singapore’s queer youth, especially under the sociocultural and political implications for the LGBTQ+ community in the country.

Sex education may just be a single aspect of school life. But by painting an inclusive and well-represented picture of society within its lessons, it has the power to save lives on the line and catalyze the shift of a social perspective based upon mutual respect and compassion.

Like it was for me, LGBTQ+ inclusive sex education isn’t simply a lesson about the biology of human gender and sexuality. It is an indispensable channel for queer youth to confide in, a find safe space to normalize taboo topics around sexuality and queerness, and seemingly the perfect opportunity to jumpstart a new generation of cultural and sociopolitical equity in Singapore.

1 comments on “I’m a Singaporean Who Went Through LGBTQ+ Inclusive Sex Ed in Taiwan, Here’s How It Was Like”