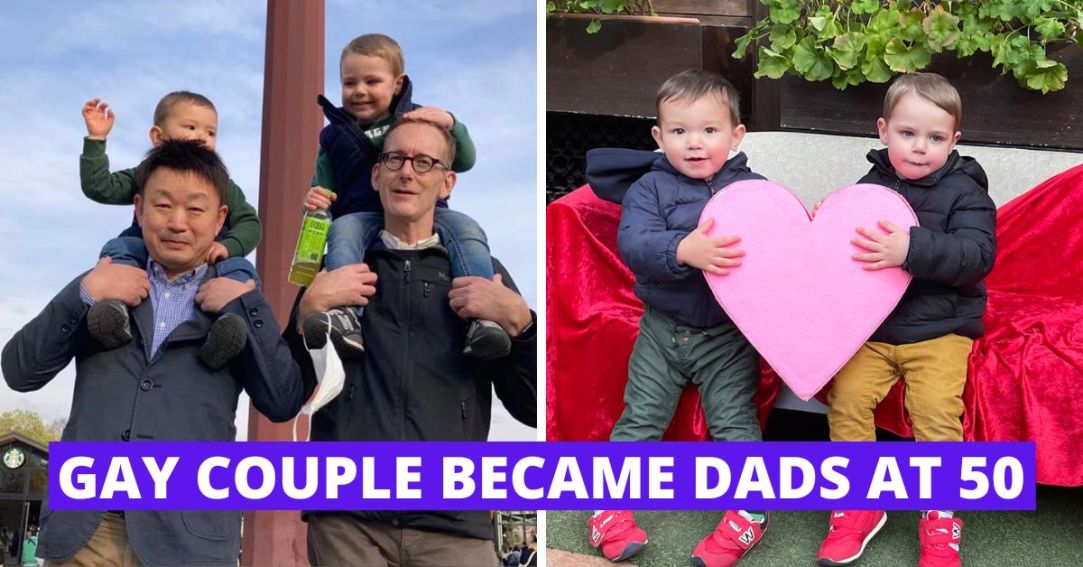 Out Of The Closet: Aoyama & Todd Share Their Story

Together for over 25 years, gay couple Aoyama and Todd became parents at the age of 50. Find out how same-sex couples can become parents in Asia.

At an age where most people slow down in life, a gay couple decided to do the unthinkable. They decided to have children!

Raising kids is no mean feat. Ask any parent and chances are, they will rant endlessly about how exhausting it is.

But to do it when both parties are over half a century years old? Now that’s a story worth exploring.

Meet Aoyama and Todd, a gay couple in Tokyo who decided to have children after they both turned 50.

Together for over 25 years, Aoyama and Todd are proud parents to two adorable boys. Their older son is 3-years old, while his younger brother turns 2 this year.

The couple may be a picture of domestic bliss now. But when they first made the decision to have kids, concerned friends and family disapproved.

The objection from their loved ones didn’t stem from homophobia. Rather, they were concerned that having children past the age of 50 would prove too much for them.

“Honestly, I also had the same concerns.

But life is short. If one keeps worrying, then you will never get anything done”

When you take into account their life before having children, their decision to have kids seems even more remarkable.

HOW AOYAMA & TODD GOT TOGETHER

Born in China, Hiroki Aoyama moved to Japan at the age of 23 for college. During this time, Aoyama attended a gay dating event where he met Todd.

For American-born Todd, it was love at first sight. Being a few years older than Aoyama, Todd was looking to settle down. Aoyama however, just wanted a fling. Undeterred, Todd pursued Aoyama aggressively. Todd’s courtship eventually won Aoyama over, and the two have been inseparable since.

From the age of 30, Todd and Aoyama would go on one holiday a year together. As the years went by, they eventually visited every city on their bucket list.

By the time Aoyama hit middle age, overseas vacations no longer cut it for him.

On the surface, it seemed like the couple were living their best life. After all, they were both comfortable financially. While many might envy their jet-setting lifestyle, Aoyama needed more.

“After more than 20 years together, I felt like our lives lacked purpose.

Holidays no longer excited me. My life felt empty.”

“When you reach middle age, your mentality changes.

You start to realise life is short, and think about the possibilities of life.”

When he first voiced his desire to have a child, everyone around him objected. It wasn’t just friends and family that disapproved. Even Todd was against the idea.

“We quarrelled a lot over this. We actually broke up over it.”

Thankfully, their break-up didn’t stick. It took some time. But Aoyama eventually won Todd over and the couple reconciled. In 2019, they made the life-changing decision to have a child.

BECOMING SAME-SEX PARENTS AT THE AGE OF 50

Aoyama and Todd had their children through surrogacy.

“The biggest difficulty for me in the surrogacy process was my own biological problems.

Due to my age, the quality of my sperm was not good, which affected the embryo transfer process. That almost made me want to give up.”

For the embryo transfer process, Aoyama had to try 4 times before the surrogate successfully conceived. Their firstborn is named Walter. A year later, Aoyama and Todd welcomed their second child; Leo.

As you would expect, having children completely upended their lives. But you would never hear a word of complaint from them.

“I am very happy to have ushered in a new life.

Now, I just think about how to take care of our babies every day; changing diapers, coaxing them to sleep, making them happy.

We don’t see children as a burden, but as something very meaningful. After all, we only have the fate of being father and son in this lifetime.”

RAISING A RAINBOW FAMILY IN JAPAN

While Japan is more inclusive than many other countries in Asia, it’s not exactly a shining beacon of progressiveness. Japan still lags behind in some regards when it comes to LGBT+ rights.

So it came as a surprise to learn that Aoyama and Todd haven’t faced much challenges with regards to being a same-sex family in Tokyo. Neighbours have been welcoming. Even teachers and fellow parents at the boy’s kindergarten have been pleasant.

In fact, the couple are so open that they’ve started a YouTube channel documenting their lives as a same-sex family in Tokyo. From cute vlogs to insightful tips, it’s evident that they are now more happy with their lives than they have ever been.

Aoyama’s parents are what he terms, traditional Asian parents. Although they knew of his sexuality, they weren’t exactly comfortable with it. As such, any topic related to his sexuality became taboo.

But after Aoyama’s sons were born, his parents became a lot more involved in their lives.

“I would often call my mum for help, and she would be very sincere in offering her advice. My parents would also often ask: ‘Is my precious grandson well-fed and warmly dressed?

To me, that was a sign of my parents finally accepting my sexuality.”

In fact, everyone who previously objected to Aoyama’s desire to have kids all came around. A large part of it can be attributed to how Aoyama and Todd are clearly thriving as middle-aged fathers.

Same-sex parents in Asia are no strangers to Dear Straight People. From Taiwan to Singapore, we’ve featured many same-sex families over the years. One common gripe among my interviewees is that they would lament about how difficult the baby-making process is.

Enter Aoyama. Instead of basking in domestic bliss, Aoyama is on a mission to make lives easier for LGBT+ people looking to have children. He is a partner at Uterus International Medical, which aims to help aspiring parents have children.

Having gone through the entire process twice, Aoyama’s single piece of advice for readers would be to not overthink it and do it when they are still young.

“I’ve always told my LGBT friends that the best time to have children is before 40-years old.

The older you are, the harder it is for your body.”

Having handled over 200 complex cases from all over the world, Uterus International Medical offers a wide range of services from surrogacy to IVF treatments. Whether you’re thinking of having children now or in the future, do check out the link below as it’s better to have the information earlier rather than later.

Once again, Dear Straight People would like to thank Aoyama and Todd for sharing their story with us.

This post is brought to you by Uterus International Medical