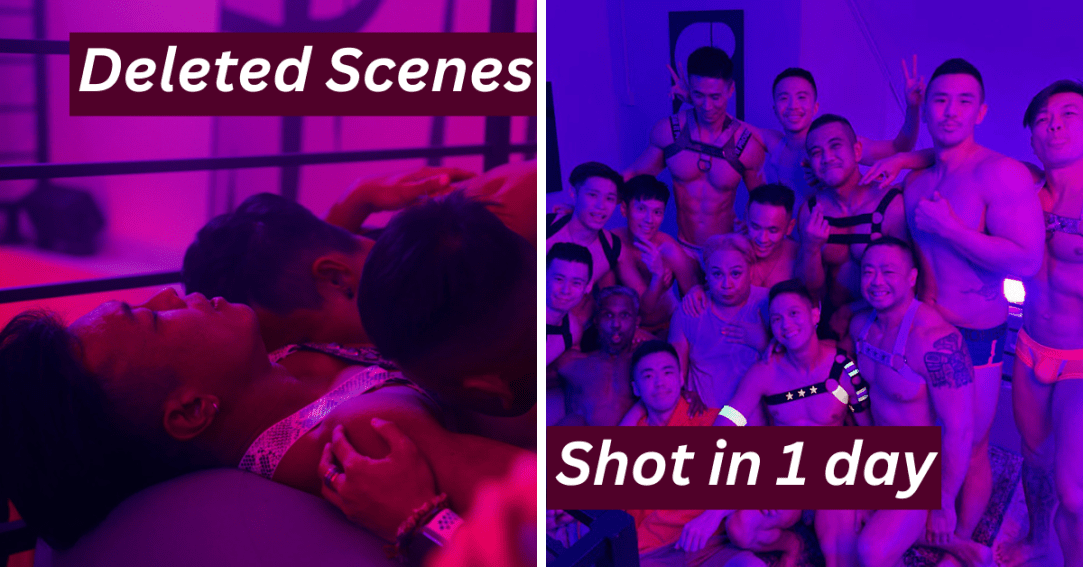 Singapore has a new gay short film to call our own!

Based on a fish-out-of-water premise, Home Par centers around a character called Fab (Aiman Haikal), who is brown, plus-sized and genderfluid. Home Par follows Fab over the course of one night as Fab attends their first ever home party. Drama and hilarity ensues when Fab’s flamboyant ways rubs the ‘straight-acting‘ gay partygoers the wrong way.

The casting call attracted over 90 applicants, of which one-third were invited to audition for the film. Out of the many auditionees, 6 actors were cast in speaking roles while a further 13 actors were offered non-speaking roles.

2. Home Par Was Shot In One Day

Based on industry standards, a 26-page long script like Home Par should have taken 4 days to shoot.

However, the production team only had budget for a one day shoot. Not wanting to compromise on the story, Dear Straight People decided to press on ahead with a very stressful one day shoot.

The cast and crew reported to the set at 5.30am, and only knocked off work at 10pm.

4. A Main Cast Member Dropped Out 2 Days Before The Shoot

As with most film shoots, the road to making Home Par was fraught with obstacles along the way.

One of the biggest challenges the team had to deal with was having a main cast member drop out 2 days before the shoot due to unfortunate personal circumstances. Thankfully, a replacement was found and the shoot was able to proceed as scheduled.

As part of Dear Straight People’s objective to showcase LGBTQ+ talents, Home Par boasts a predominantly gay cast. This is an unfortunate anomaly in Asia, where most Asian BL dramas will only cast straight actors.

The only straight cast member in Home Par is Josh Cho, who plays a straight go-go boy called Sky.

In Home Par, Leon performs his own original song Inferno (FIREE!), which is also featured in the end credits section. In addition, Leon’s new song Princess is showcased during a solo dance performance by Fab.

Every quarter, Dear Straight People aims to raise funds for one LGBT+ charity in Asia.

You can donate to their project called The Roof here.

8. Home Par Is Sponsored By A Gay Owned Business

Filmmaking is an expensive endeavour, and Dear Straight People does not have the resources to produce films on our own. As such, we rely on corporate sponsors to provide the funding needed to produce them.

FabulousMe, a gay owned business specialising in gay party accessories, is the proud sponsor of Home Par. You can check out their extensive offerings here: https://fabulousme.com/

Home Par was first confirmed way back in August.

From scripting to post-production, the process of producing Home Par took about 4 months.

10. Home Par Was Produced As A Result Of The Success Of Getaway

Getaway went on to become a massive hit, with its 5 episodes garnering over 1.7 million views and counting. Seeing the success of Getaway, FabulousMe became interested to have their own film. A short film centering around a private gay home party was pitched to FabulousMe, which is how Home Par came about.

To date, Singapore only has 12 LGBTQ+ short films and 2 web series on YouTube. That is less than the average number of BL dramas out of Thailand on a monthly basis.

Show your support for LGBT+ content from Singapore by watching Home Par for free here: