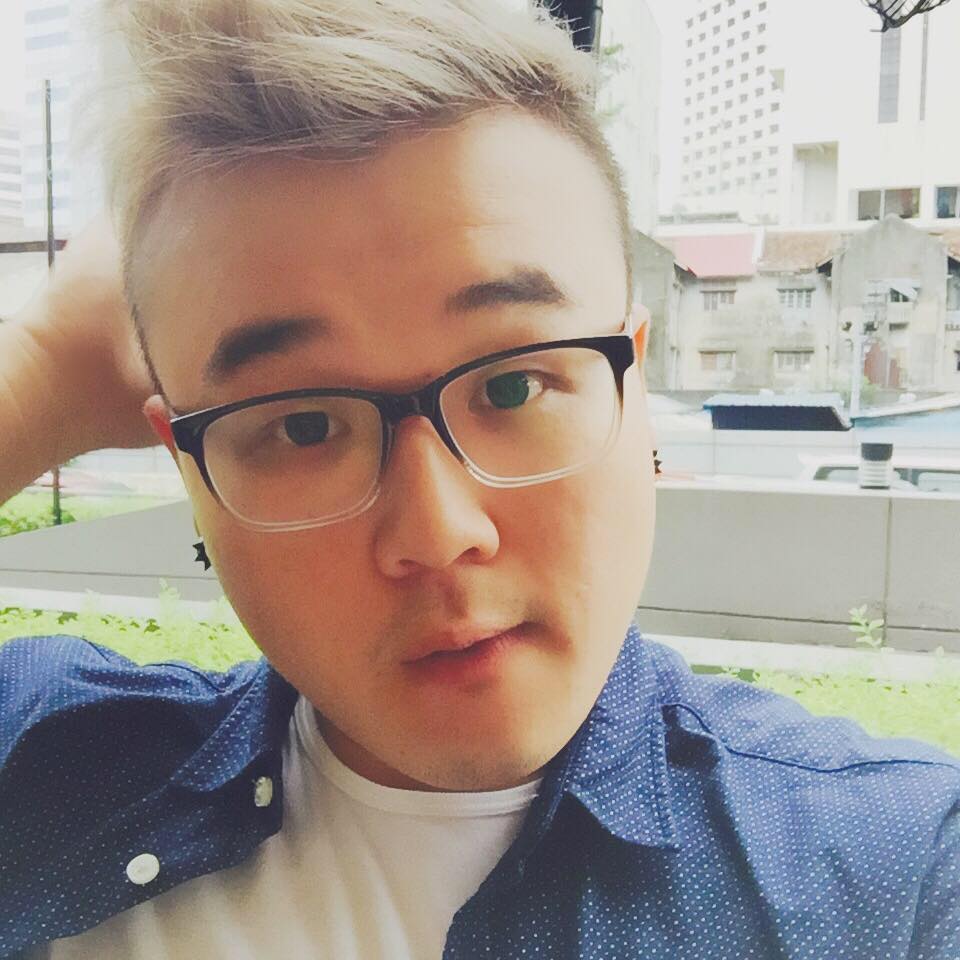 Out Of The Closet: Alex Tan Shares His Story

By Dear Straight People in Coming Out, Dear People, Gay, Gayspiration, Out Of The Closet on October 17, 2016December 20, 2016
No comments

Meet 23-year old Singaporean Alex Tan… who not too long ago, struggled a lot with body image issues.

Being gay is hard. But being gay and fat is even harder. Fat shaming is prevalent in the gay community. And if you don’t believe me, just ask Alex Tan.

At his heaviest, Alex weighed over 100 kilograms. During that time, Alex faced heavy discrimination in the gay community. He was even once mocked for being too fat and ugly to be on the gay apps!

This random person actually messaged me on Grindr and was like ‘You’re so fat and you are so ugly why are you on this app.’

That affected me a lot. I already knew I was fat back then.

The Alex of today may no longer be constantly plagued by body image issues. But it took him quite a while before he was finally able to come to terms with his own physique. 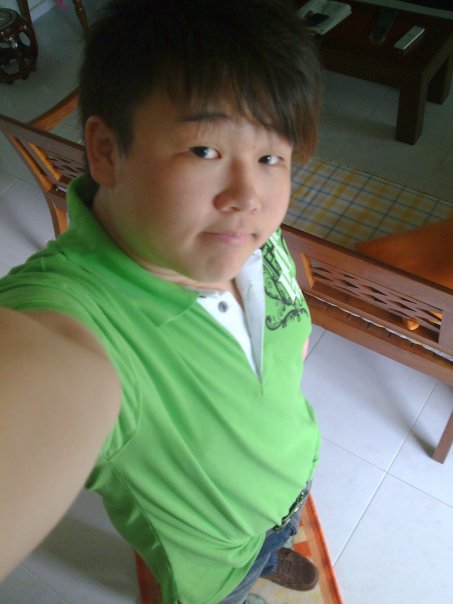 Alex was 12-years old when he had his first brush with same-sex attraction. And the first crush he ever had was on his PE teacher!

Everyone tends to have a crush on their PE teacher so I had that as well.

I was like ‘Omg this guy is so good looking‘.

His indifference to the opposite sex and his growing attraction to the same gender over the next few years resulted in him identifying himself as gay by the time he turned 15. Unlike many other queer youths however, his sexuality never posed much of an issue to him,

In Secondary 3, I had another crush on another guy. That was when I understood the word gay.

I was quite cool with it.

But while Alex had no issues accepting his sexuality, coming to terms with his own body wasn’t as easy. 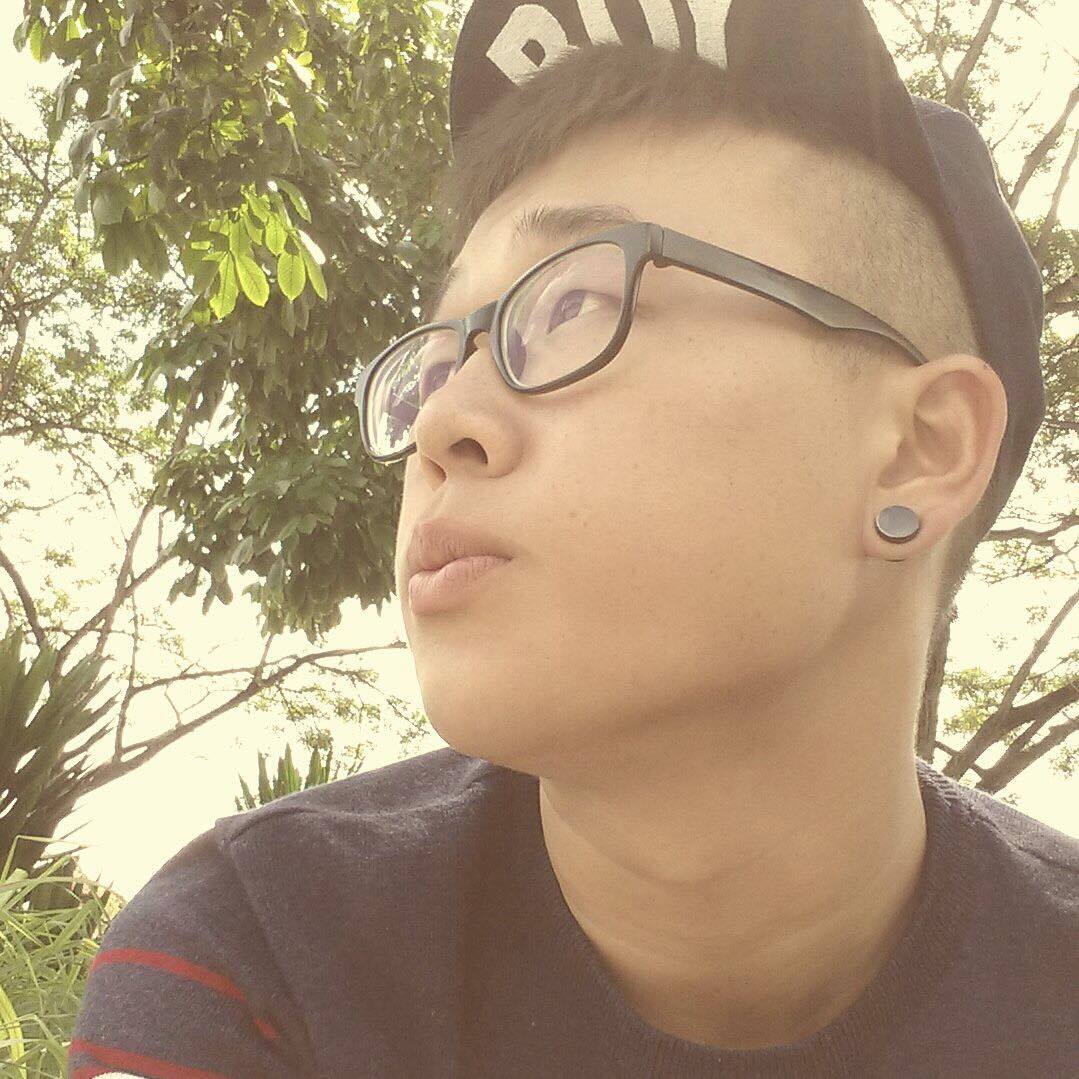 Upon turning 18, Alex started exploring the gay scene. PLAY was the first gay club he ever stepped foot in. And it soon became a regular haunt for him and his gay best friend at that point in time. It was also then that he started to feel incredibly self-conscious about his weight.

I used to be fatter then. That was when I realised that people don’t really talk to you if you’re fat.

People only talked to me when they were drunk. But they won’t talk to me in their sober state.

But feeling rejected wasn’t even the worst part. One of the most hurtful fat shaming incidents that Alex experienced was when an anonymous profile on a gay dating app randomly sent him malicious messages out of the blue.

This random person actually messaged me on Grindr and was like ‘You’re so fat and you are so ugly why are you on this app.’

Stung by the rejection from the gay community, Alex resolved to lose weight upon enlisting into the army. 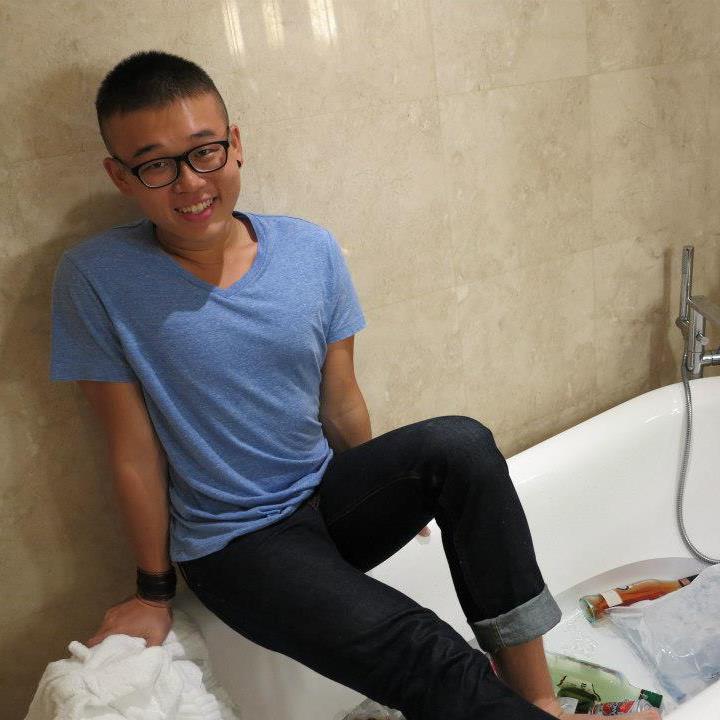 Fuelled by his desire to attain a slimmer body, Alex gave his all during the gruelling training sessions

As part of the obese batch, Alex was made to run and do a lot of weight lifting exercises everyday. His efforts paid off and Alex managed to shed over 20kg within the first three months of military training. His physical transformation was so drastic that even his lieutenant would point out during topless training sessions that Alex had abs!

I was one of the very few who lost a lot of weight during the first few months of training.

His training instructors weren’t the only ones who took notice of Alex’s physical transformation. Thanks to his new physique, Alex started receiving a lot more attention in the gay clubs too. And it wasn’t long before he embarked on his first gay relationship. 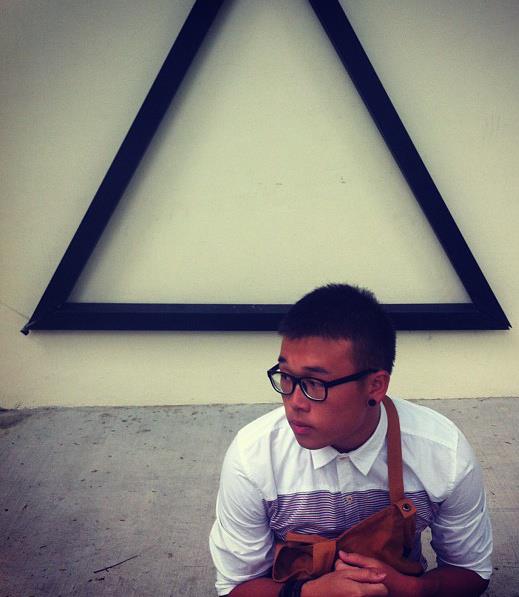 His physical transformation however, came at a price. Obsessed over his body image, Alex started developing eating disorders.

When I take a sip of coke or a bite of fried food, I would feel like puking. It had become a gag reflex already at that point of time.

After finishing his National Service, Alex spent half a year working in a popular gay sauna called Cruise Club. His six-month long stint there served to reinforce his perception of the importance of a good body in the gay community.

Everything is about sex there. People wouldn’t want to have sex with people they are not attracted to. Gay men especially tend to be visual people. 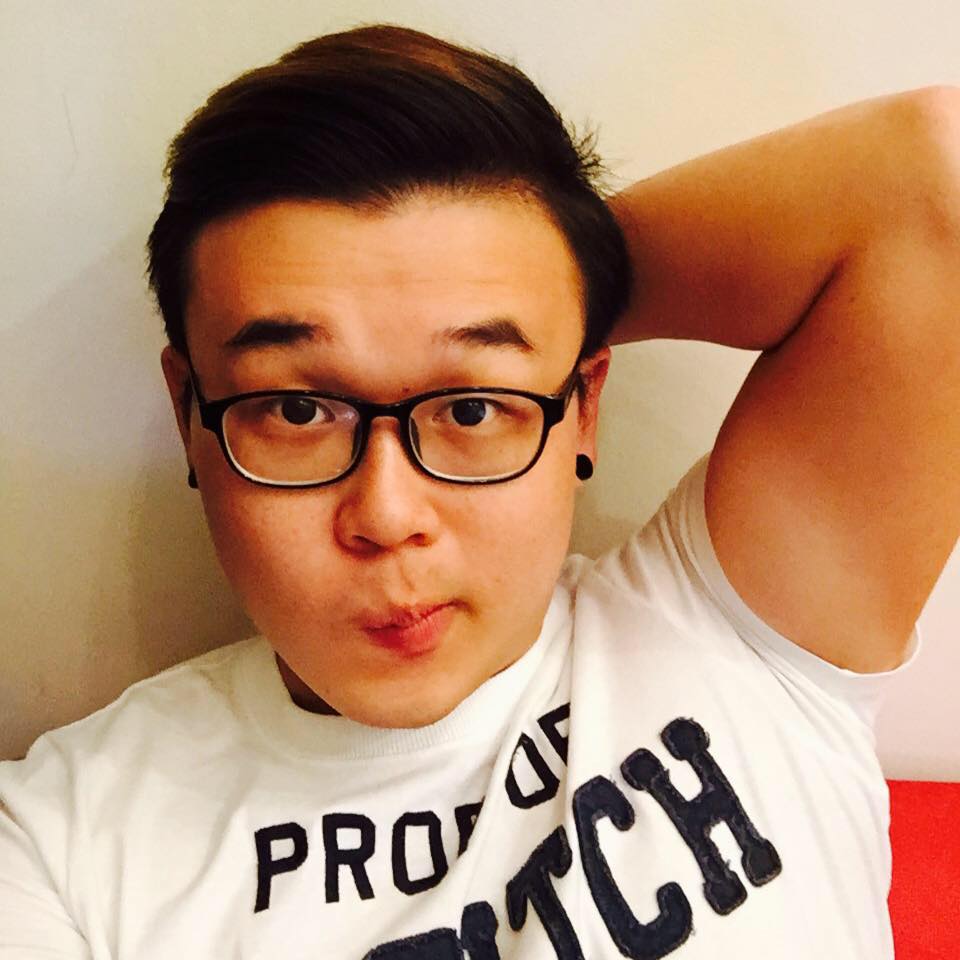 While working in the gay sauna, Alex met Daniel, a programme manager from AFA (Action for AIDs) – a non-governmental organisation dedicated to fighting AIDS/HIV infection in Singapore.

Daniel was at the gay sauna as part of an outreach program promoting safe sex. The two struck up a conversation and Daniel suggested that Alex should come work for AFA instead. Alex decided to send in his resume which turned out to be one of the best decisions he ever made in his life.

I found out that I had a passion for community work. AFA actually helped me to become a better person.

Instead of frequenting the gay clubs, Alex’s leisure time was spent hanging out with his colleagues instead. Surrounded by older activists, his conversations got more mature and slowly but surely, he stopped focusing so much on trying to maintain an ‘ideal body’.

Although he’s no longer as slim as he used to be, Alex is infinitely more comfortable with his appearance now than he has ever been in his life.

Currently single, Alex confesses to having a thing for nice eyebrows.

I like guys with thick eyebrows and nice eyes. That’s the first thing I notice in a guy. 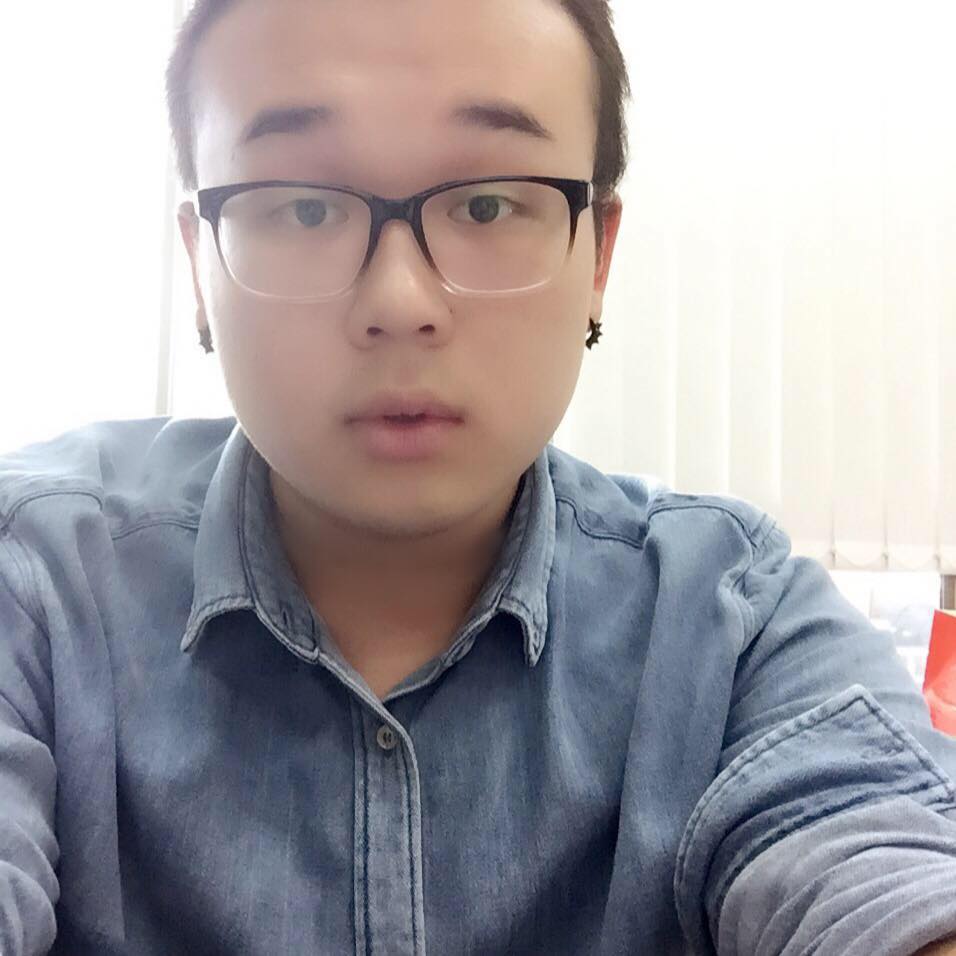 The first person who knew was my sister who found out when I was 20.

When I was in National Service, my sister sent her phone for repair so she used my phone. Back then, I was texting guys already so my phone had a lot of gay guys who sent me kinky messages.

She called me and was like ‘Who are all the guys in your Whatsapp?’

That was when she started screaming vulgarities at me and she asked me if it was my best friend who influenced me.

But after that, she calmed down and  called me back and told me she won’t tell mum and dad.

Actually, I never told my parents. I think a lot of parents, especially mothers, are very sensitive. They tend to know but they tend not to say anything about it.

My aunt works in the retail line so she sees a lot of gay people there so my aunt got the gay vibe from me and asked my sister if I was gay. My sister said ‘I don’t know’. My aunt was actually concerned about whether I was comfortable with being gay so she wasn’t homophobic or anything.

She asked my parents and they were like ok with it.

3. How was it like for you being fat when you first entered the gay scene?

At first, it was always just me and my gay best friend. My best friend would be making out with people and I would just be standing around.

When I got to the Army and I started slimming down, that was when people started introducing themselves to me when I went to party at PLAY. It gave me the impression that everything is about aesthetics.

Also when I meet guys I chat to online, they will be like ‘Oh you don’t look like your picture‘. These kind of small remarks that people give will actually hurt you.’

I was really self-conscious at that point of time.

4. How comfortable are you with your body now?

Now I am back to being myself and don’t really care about aesthetics anymore. People who don’t know who I am, who are they to judge me.

But if somebody were to call me fat now, I will still slap them!

5. What advice do you have for gay people who are struggling with their weight?

I think most important is to be comfortable with yourself.

If you’re not comfortable with yourself you are not going to be able to adapt yourself to the community.

6. What do you think are the biggest misconceptions straight people have about the gay community?

People think gay people are sluts and that they are flamboyant but that is not true.

There are all kinds and types of gay people and not everyone behaves the same way. 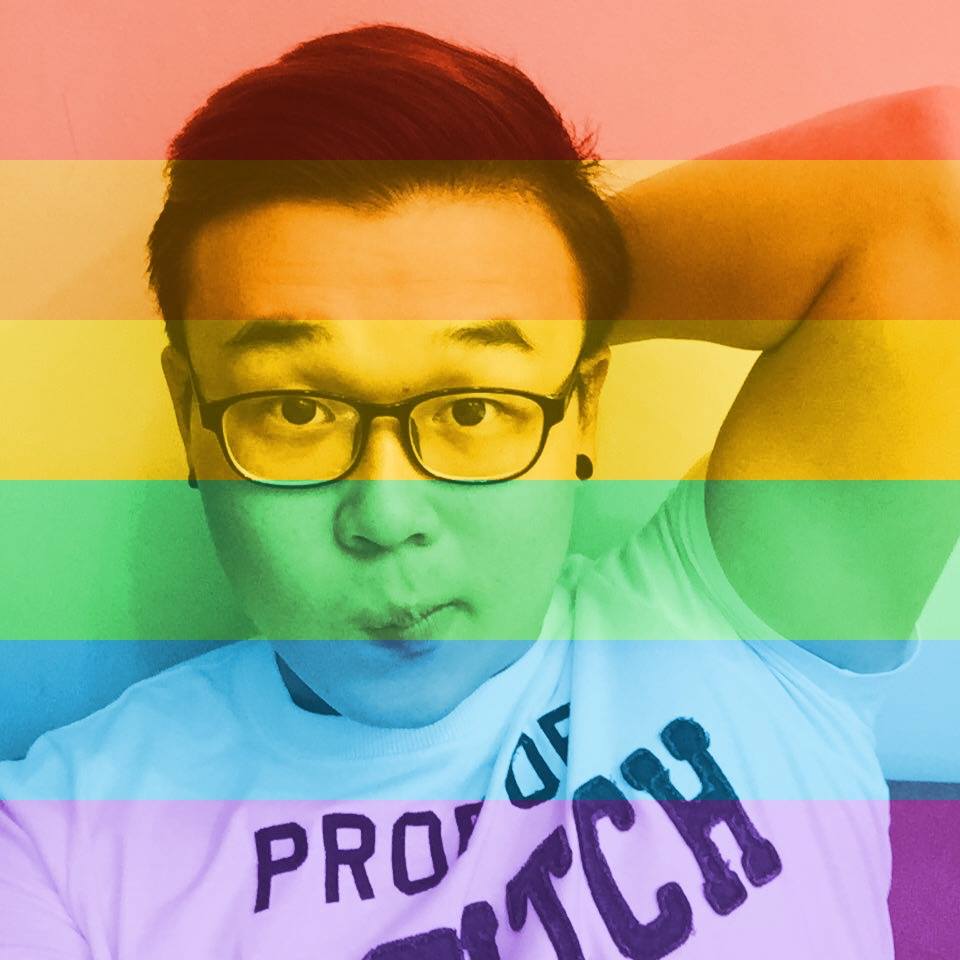 Once again, Dear Straight People would like to thank Alex Tan for sharing his story with us.

If you would like to keep up to date with how Alex is doing, you can connect with him through Facebook or Instagram via @tywalex . You can also find out more about Action for Aids (AFA) here.