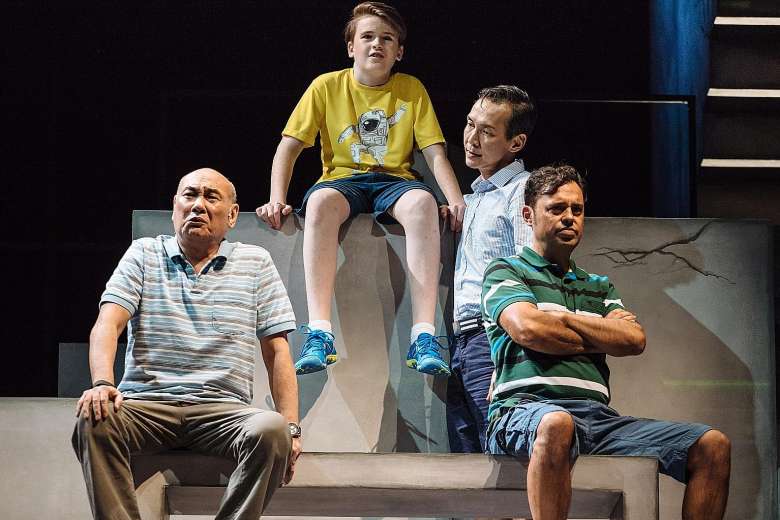 I walked into Pangdemonium’s production of ‘TANGO’ expecting a straightforward play about the plight of a gay family in Singapore. What I got instead was so much more.

Inspired by a true story, TANGO centres around a gay couple, Kenneth (Koh Boon Pin) and Liam (Emil Marwa), along with their adopted son, Jayden (Dylan Jenkins), who’ve just moved back to Singapore after a long stint in the UK.

Having previously left the country due to harassment from homophobic neighbours, Kenneth and Liam return to care for Kenneth’s father, Richard (Lim Kay Siu), and build a life in what they hope to be a more liberal Singapore.

Tremendous progress may have been made in the past 10 years. But the conservative undertones of the island state rears its ugly head in the form of a confrontation with a waitress at a Chinese restaurant who disapproves of same-sex parents. A traditional woman, she refuses to accept a family unit as being anything other than a husband, wife, and their children. An argument ensues that eventually blows up into a whirlwind of drama that consumes the entire nation.

As a long-time theatre student, what immediately caught my attention was the set and lighting design.

Captivated from the get-go, the production kicks off with the entrance of the ensemble trailing Dylan Jenkins, who plays the adopted son Jayden. The light follows him and unfurls the set as the rest of the cast join him onstage.

Built upwards in a way that allowed the stage to seem much bigger than its actual size, the set was gorgeously minimalistic with nothing but a few stools serving as the props. Genevieve Peck’s projection designs allowed us to contextualise and understand their environment thereby facilitating the seamless flow of the show.

The overall simplicity but effectiveness of the design brought out a fangirl squeal from the theatre geek in me!

Review of performances – Benjamin Chow’s Performance Was My Personal Favourite

The epitome of an ensemble piece, each of the 8 cast members are integral to the telling of the story, and it was fascinating to see how their relationships unfolded and came together.

The entire cast put on strong performances, and I was particularly drawn to Lok Meng Chue’s portrayal of Poh Lin. As an ally, her character infuriated me as she represented the kind of bigotry that the LGBT community have fought so hard against. But as the story started to flesh out her character, it soon became apparent that she was merely a victim of circumstances. Her ignorance didn’t stem from malicious intent but rather, ignorance.

But the standout performance of the night for me came from Benjamin Chow’s performance of Benmin – the closeted gay nephew of Poh Lin. Arguably the most complex character, Benmin is trapped in the middle—torn between the filial love he has for Poh Lin whilst grappling with his own sexuality. His struggle is something that will resonate deeply with gay audiences.

I would also like to highlight Karen Tan’s performance. Karen very bravely stepped in just one week before the play was set to open to replace Anita Kapoor’s role of Elaine. Karen more than stepped up to the challenge, delivering a marvellous performance that effectively conveyed Elaine’s kind heart and quiet desperation to do what’s right.

As Pangdemonium’s first ever original production, TANGO was refreshingly raw and a stark reminder of real realities faced by the LGBT community today. It does a good job in painting a realistic portrait of an unconventional family. And it even manages to throw in some accurate, and at times comical, commentary on the modern gay scene in Singapore.

As usual, I was impressed by Tracie Pang’s direction and how vividly the play came to life while still ensconced in a theatrical setting. The characters felt like people I’ve met—the closeted gay boy, the ignorant homophobic auntie, the loving gay couple. And it certainly hit home for others as well, such as my closeted plus one who teared up at several moments throughout the play.

Ultimately, I believe the intention of this play is to remind us that while we may not always see eye to eye with society, people are still people, and love is still love. And for that, I applaud Pangdemonium for producing a balanced play that objectively explores both sides of the fence.

You can book your tickets to catch TANGO here.

5 Sex Workers In Singapore Share Their Inspiring Stories With Us