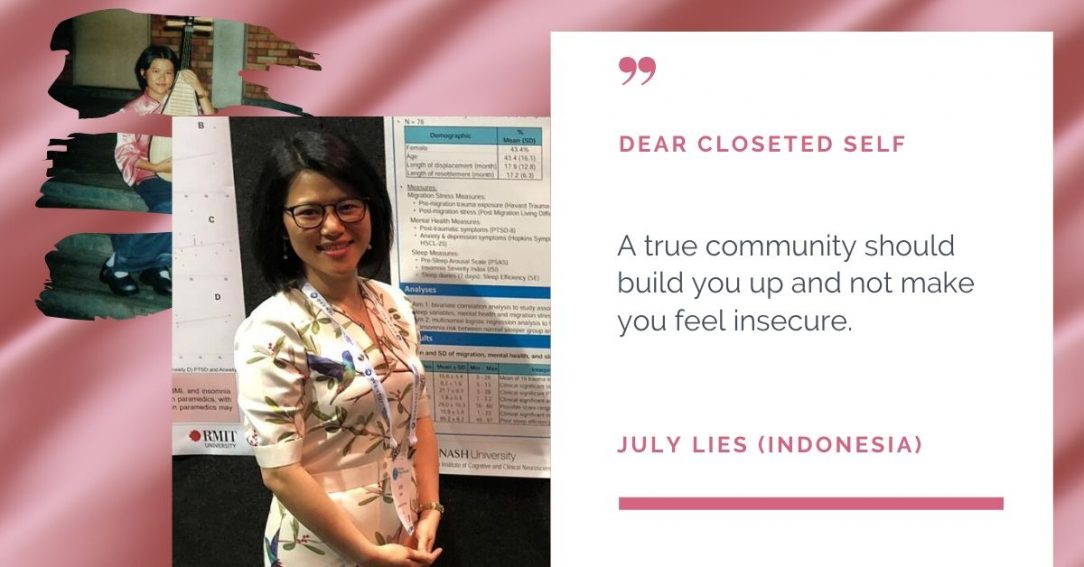 July Lies – Letter To My Closet

July Lies from Indonesia, pens a letter to her closeted self detailing her struggles with her sexuality, fitting in with the LGBTQ+ community and how she managed to overcome it all. 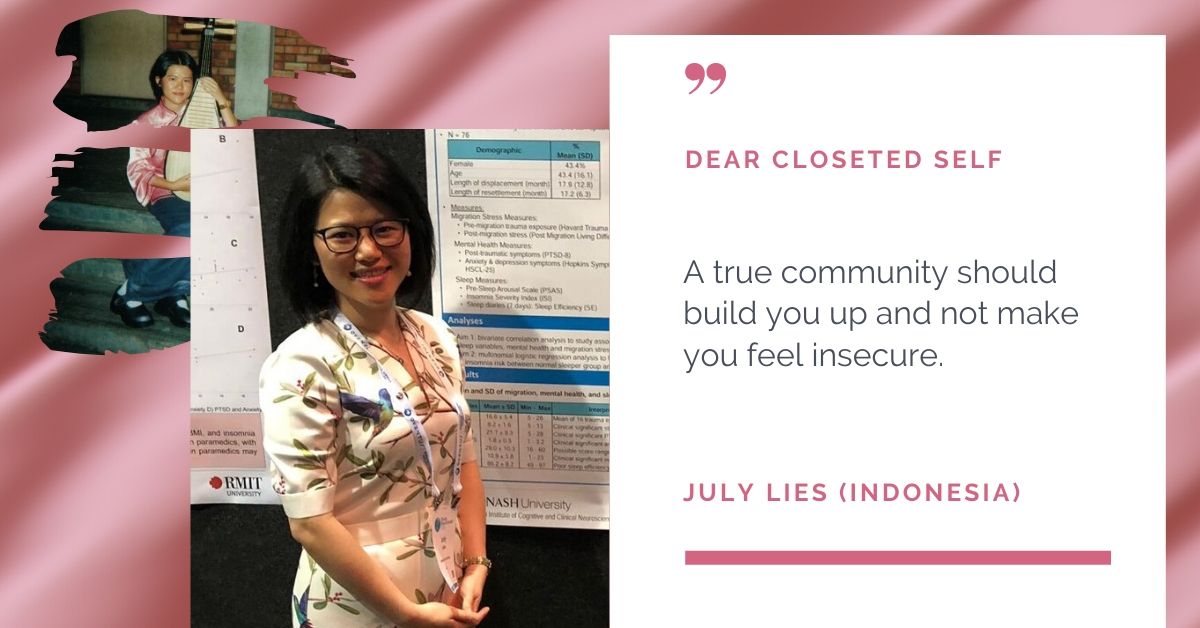 I know it can be difficult to be a 15-years old Indonesian Chinese living in an all-girls boarding school in Malaysia. It was confusing enough for you to understand why you had to be sent away for safety because of your gender and race during the 1998 racial riot in Indonesia. Moreover, you had to learn how to survive the Indonesian and Malaysian segregation, and to endure being a minority within a minority because you were from an island and not a big city like the rest of the Indonesian girls. I am sorry that you had to experience bullying by your fellow Indonesian girls – it was really scary when you found out pages from your homework went missing, you woke up with your hair being cut off, and being locked inside the school bathroom at night. It was even scarier when you realized that you were attracted to a Malaysian girl who showed kindness to you. The never-ending taunting and self-policing were rough, I know. I was there with you when you first thought of taking your life and started writing an apology letter to your parents for committing suicide. I witnessed your pain and suffering.

The next seven or eight years were still rough, I have to say. You put a lot of pressure on yourself to do well academically by studying 15 hours a day and dating guys in college thinking that was the way to go. Your hard work paid off; you were accepted into a top university in Canada. You continued to study hard, work hard, serve in church, and dated men. Your parents were very proud of you for being so independent and hardworking. But deep down, you were unhappy, and you were very depressed. In your early 20s, you met a girl from another church and both of you really liked each other. You got very confused about your sexual orientation, started questioning if you were a bisexual all this time, whether you were actually a lesbian who had been suppressing your authentic self or whether this was a spiritual warfare that the devil sent to distance you from God. You hid inside the closet for a couple of years while dating the girl from another church. You condemned yourself by leaving the church and working in menial jobs thinking you deserved this because you ‘chose’ a sinful life. You were so scared to come out to your parents, fearing that if your dad found out, he would lash out on your mother and it would not be safe for her. This fear was very real because you had witnessed things at home when you were a lot younger.

One day, you came across Marianne Williamson’s writing and you read this specific quote:

“Our deepest fear is not that we are inadequate. Our deepest fear is that we are powerful beyond measure. It is our light, not our darkness that most frightens us. We ask ourselves, ‘Who am I to be brilliant, gorgeous, talented, fabulous?’ Actually, who are you not to be? You are a child of God. Your playing small does not serve the world. There is nothing enlightened about shrinking so that other people won’t feel insecure around you. We are all meant to shine, as children do. We were born to make manifest the glory of God that is within us. It’s not just in some of us; it’s in everyone. And as we let our own light shine, we unconsciously give other people permission to do the same. As we are liberated from our own fear, our presence automatically liberates others.”

This quote reminded you that you are a child of God and playing small does not serve the world. And deep down, you still feel the love of God even though you have left the church. When you reconciled your faith and sexuality, things started to shift.

My dearest, things got better from there on. You and your female partner moved to Singapore to start a new life. There was significant discrimination that you and your partner experienced from the larger public and some came from your own LGBTQ community. One specific experience, this lady said she was a “high level lesbian” who had never dated men and only dated ‘femme’ women, whereas you were a “low level lesbian” who dated men and had a ‘butch’ looking female partner. That was an experience similar to feeling like a minority within a minority in the girls’ school, so you can say your earlier experience prepared you for moments like this.

I am sharing this detail with you as I want you to know that I understand how desperately you wanted to feel you belong to an LGBTQ community, but a true community should build you up and not make you feel insecure. Unfortunately, the stress from discrimination and being closeted affected your relationship and your partner moved back to Canada. However, your faith in God led you to an affirming church (yes, rejoice! Gay churches do exist!) where you felt seen, heard, and belonged. Eventually, you met your second female partner who shared the same faith. You grew more confident in yourself and in being who you were. That was the start of breakthrough after breakthrough. In your mid-20s, you received a prestigious scholarship to study a master’s degree and worked as a clinical psychologist in a large mental health institution. You must be thinking that people from a lower socioeconomic status like yourself do not usually get an opportunity to pursue higher degree, but all these were made possible because of your hard work and dedication. 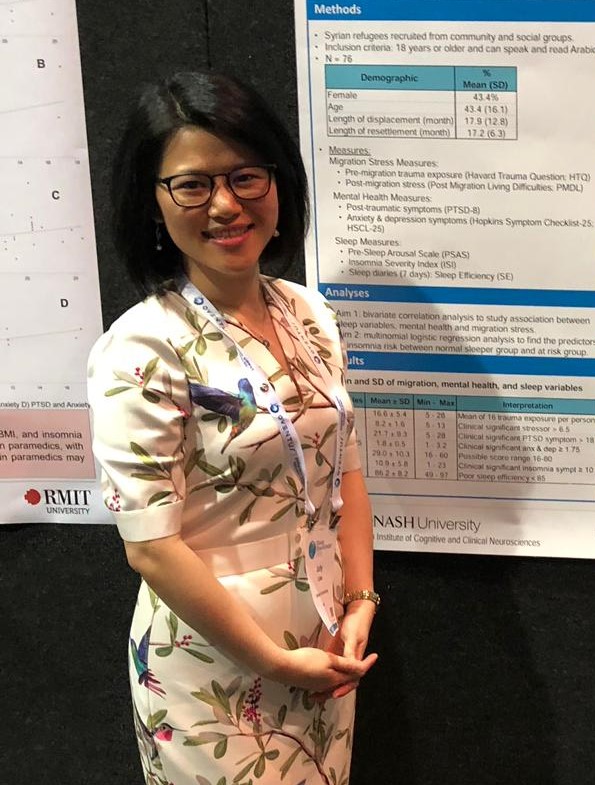 In your late 20s, you came out to your parents. It was definitely one of the hardest things you’ve done. You realized that staying in the closet to ‘protect’ your mother was no longer an authentic justification. You decided to come out because you decided to live in ‘love-based’ and not ‘fear-based’ possibilities; you wanted to include your parents in your whole life and not just show one side of your life, such as your achievements. I would spare you from the details of the coming out to your dad, it took you guys a few years to work it through, but let me assure you that your biggest fear of harm done to your mom did not take place. It was truly after you came out to your parents that you were able to come out fully to the world. You did not just blossom, you became unstoppable.

You started to prioritize what you need/want, rather than just pleasing people or avoiding upsetting people. You ended your relationship (don’t worry, you both were still good friends), and you started a new relationship. In your early 30s, you proposed to your third female partner and married him three years later. There was no typo, the love of your life transitioned, and you supported him in that process. I know there was a lot for your 15 years old head to wrap around. And, I have one more spoiler that I cannot stop myself from telling you… Ready? You married the same person who showed you kindness when you were 15 years old. Yes, you married your first love! Also, finally, your dad gave his blessing and both of your parents came to the wedding. It was such an amazing wedding. Your friends from all around the world flew in to celebrate your big day and you looked beautiful.

You think I am going to end this letter here? Not yet. I want to tell you more because I want you to know all the amazing things you’ve accomplished. You continued to pursue your dream – you completed your doctorate degree in Australia and presented at the United Nation and World Health Organization conferences. You developed meaningful research projects and work in a private practice. You continued to serve in an inclusive church and now you are trying for a baby. I know it sounds unbelievable, but all these were made possible because you first decided to reconcile with your sexuality. Then you learned to feel comfortable and confident in who you were, and when you finally acknowledged your needs/wants you were then able to let your light shine.

As Marianne Williamson said, playing small does not serve the world, we need to let our light shine so that others can do the same, and when we are liberated from our own fear, our presence and our stories can liberate others. Shine my 15 years old self, go into the world and experience this life fully.

You might also want to read the letter from July’s husband:

Kim Lee – Letter To My Closet