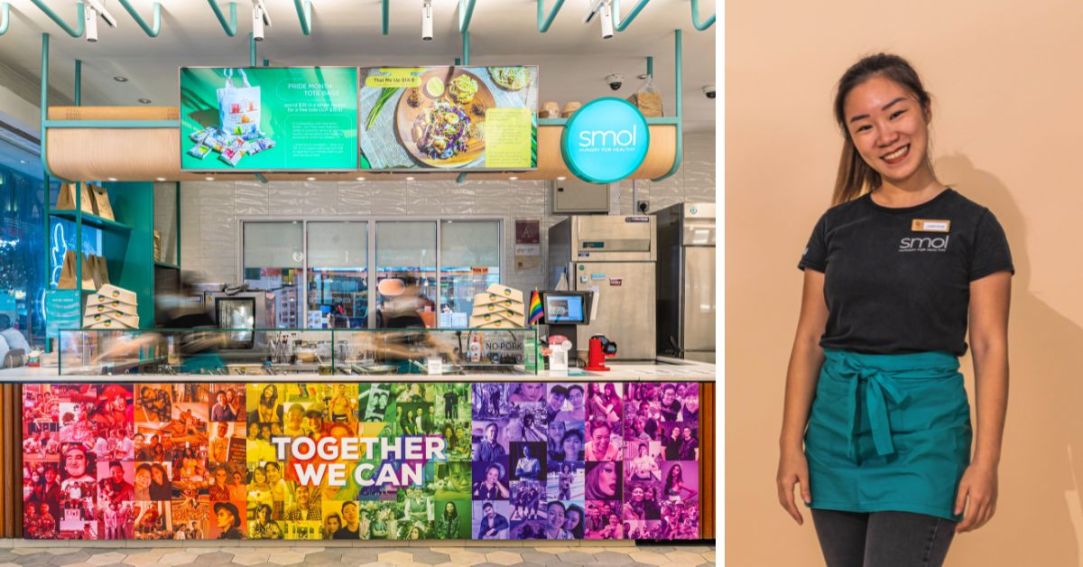 Singaporeans reading this will likely already be familiar with SMOL Singapore.

Last year, the female founded start-up became the talk of the town when CCTV footage of a hate crime against their owner went viral. The flag-throwing incident turned SMOL Singapore into a symbol of sorts for the LGBT+ community.

It may have been over a year since that fateful incident. But SMOL Singapore is still flying the pride flag high. Drop by any of their outlets and you will spot a pride flag standing tall on their counter.

Singapore may have repealed Section 377A. But it will take a while before attitudes towards the LGBT+ community improve. A few weeks ago, two teenagers harassed the SMOL Singapore staff at their PLQ outlet to remove their pride flag.

Not only did SMOL refuse. Their owner even managed to laugh it off:

“I’ve always been very entrepreneurial from a young age. Whether it’s starting blogshops or selling books from my garage.

The idea for SMOL first sparked in 2017 during a trip to Finland, where healthy food was very accessible. That trip was what started my desire to redefine comfort food in Singapore.”

In 2017, Charmaine took the plunge by quitting her job at her family business to start SMOL. Back then, the only relevant experience Charmaine had were a few part-time jobs in F&B. With no experience in running a business or managing a kitchen, the odds were against her.

“I basically emptied my bank account to start SMOL Singapore.

I was only 20 when I started SMOL. At that age, you think you know everything, but you really don’t. So the next few years were a wake-up call for me.

It was also difficult for people to take me seriously. I myself was also figuring out who I was as a person”.

Charmaine may have been finding herself at that age. But one thing was clear even from back then; the desire to be a good person.

The motto of SMOL Singapore is simple but apt; Good food. Good people.

Serving up quality food is the standard for all F&B establishments. But what really sets SMOL Singapore apart is the desire to ‘be good people’.

“Our first pride campaign was in June 2020. I didn’t have a social media team back then, so it was super DIY.

We had a photo frame where customers could take a photo and share what equality means to them. Only 2 people participated. But 1 of them took down their post so eventually, we only had 1 participant.”

Despite the lukewarm response, Charmaine continued to run pride campaigns. Little did Charmaine know, her commitment to being an ally of the LGBT+ community would unintentionally turn SMOL Singapore into a household name.

One of Charmaine’s full-time staff called in sick on that day. So Charmaine went in to work at the Lau Pa Sat branch to cover her. Charmaine was going about her normal business when a man approached her to ask what the Pride flag on their counter meant.

“I still remember it like it was yesterday. I explained to the man that the Pride flag was to show our support for the LGBT+ community.

But at that point, I could already tell from his body language that this was not going to end well.”

The situation escalated soon after. The man started screaming at Charmaine, telling her that it was not right to display the Pride flag in a public space. Not wishing to enrage the man further, Charmaine kept quiet.

The man’s anger however, could not be quelled. In a shocking turn of events, the man threw the pride flag at Charmaine while screaming that she will be going to hell.

“I posted the CCTV footage on my personal Instagram, and within an hour, my inbox was flooded with concerned messages.

I received a phone call from a good friend of mine who is quite involved with the local queer advocacy scene. She encouraged me to share the video publicly as it was important for the public to know.”

After posting the CCTV footage on SMOL Singapore’s Instagram, Charmaine switched off her phone and went to bed. The next morning, Charmaine woke up to find her phone buzzing non-stop.

Friends whom she has not talked to in years reached out to comfort her. But that was just the tip of the iceberg.

When Charmaine went to work that day, she was shocked to find massive queues at SMOL’s outlet.

Mind you, this was during covid and offices have not even opened yet. This meant that people were actually travelling to the CBD just to support SMOL.”

The flag throwing incident would go on to become one of the biggest news stories in Singapore in 2021. In fact, the case earned mentions in parliament on two separate occasions.

6 months after the infamous incident, the perpetrator was given a conditional warning by the police.

“All I can say is that I was just happy that they closed the case.”

The Pressure Of Being An LGBT+ Ally

Every dark cloud has a silver lining. For SMOL Singapore, the outpouring of love they received as a result of the flag throwing incident was unprecedented.

For the next 2 weeks following the flag throwing incident, long queues at SMOL Singapore were a common sight. Members of the LGBT+ community and allies alike, would travel all the way to SMOL’s branches to show their support.

The outpouring of support however, has inadvertently created pressure for Charmaine and her team.

“We try to create bigger and better pride campaigns each year.”

For their most recent Pride campaign, Charmaine’s team reached out to hundreds of LGBT+ people to create a massive pride-themed collage featuring Singapore’s LGBT+ community. Charmaine also participated in Proud Spaces, a career fair organised by Chope as part of Pink Fest.

“I think that every month should be Pride month.

I do think that it’s important for businesses to take a stand, as businesses generally have more influence than individuals.”

In a country where most businesses are wary of openly supporting the LGBT+ community, SMOL Singapore stands out.

Drop by the SMOL website and you will see a tab dedicated to #smolpride. Some initiatives under #smolpride is SMOL’s commitment to displaying the Pride flag all year round, as well as having inclusive hiring practices.

“One memorable incident was when an Indian mum came by with her daughter. Her daughter asked what the ‘rainbow’  flag was, and the mum explained to her daughter that this was the pride flag.

That was an OMG moment for me! In my small way, I was starting conversations and making an impact.”

Like most F&B establishments, SMOL Singapore struggled to keep its business afloat during the pandemic.

“Due to Covid, it has been very difficult trying to keep our doors open for the past 2 years.

Things are getting better now but everything that we are earning now is just going back into the business.”

Section 377A may be repealed. But businesses in Singapore are generally wary about openly supporting the LGBT+ community due to potential backlash from conservatives.

The LGBT+ community can discern which businesses are genuine in their support of the community. When intention is genuine, support follows.

With 8 staff and 2 branches, things are looking up for SMOL Singapore.

“I do hope to scale beyond Singapore one day.”

“I’m always looking to collaborate with like-minded businesses or people so please feel free to slide into my DMs.”

While regional expansion may not be happening for SMOL Singapore just yet, they do have a few vacancies in Singapore that they need filling up. SMOL Singapore is looking to hire a Management Trainee, as well as part-time and full-time service crew. Interested parties can email eat@smol.sg for more info.

Become a patron and gain access to patreon-exclusive content such as our Patron-exclusive podcast featuring the founder of SMOL Singapore as she reflects on last year’s infamous flag throwing incident and what it means to really be an ally to the LGBT+ community.