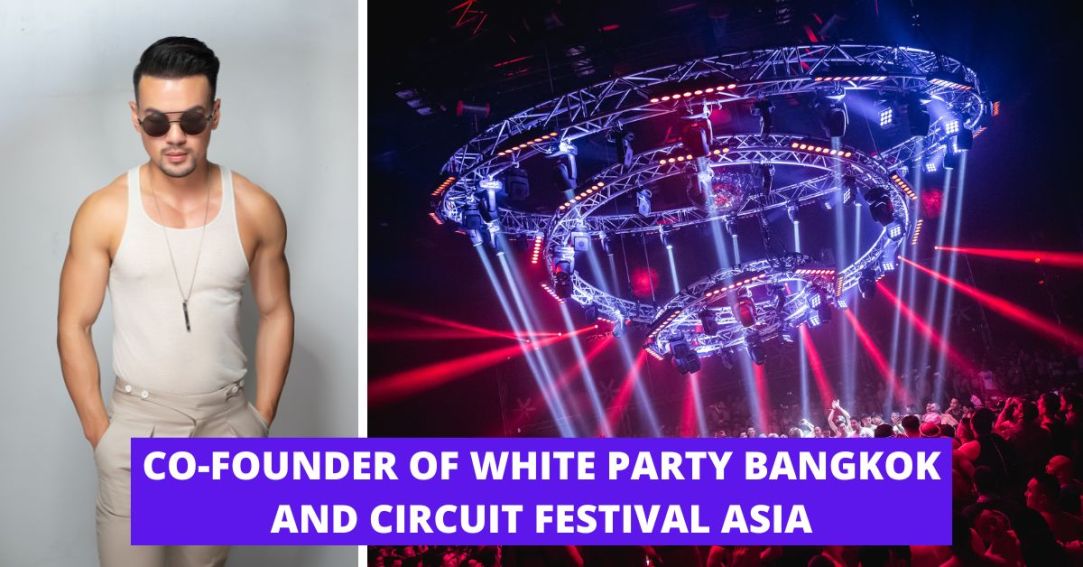 Candid Convos: Blue Gets Real About Life As An Event Organiser During Covid

Blue Satittammanoon, co-founder of White Party Bangkok and Circuit Festival Asia, gets brutally candid about how life was like was for him during Covid.

At the height of the pandemic, Blue Satittammanoon almost left the event industry.

As the co-founder of some of Asia’s biggest gay parties, his departure would have been a massive loss to the gay community. But thankfully, Blue didn’t abandon ship.

Not only is Blue sticking with the event industry. He is determined to make his upcoming events bigger and better than before.

Suffice to say, Blue is one of the most influential gay figures in Asia.

With his social standing and a perpetual smile on his face, few are aware of the struggles event organisers like him faced during the height of the pandemic.

When news of covid first broke in February 2020, the general consensus was that it would last for just a few months.

“I recalled talking to my team that we are so lucky that it happened after our WPBKK’s 5th Year Anniversary event, which was a massive show just a month before.

With the little information we had then, we thought it would blow over in just a couple of months and we would be able to move forward with Circuit Festival Asia in June.”

Like the rest of the world, Blue’s optimism was misplaced. The pandemic didn’t just drag on. It actually got worse. As cases soared all over the world, borders shut down.

“As an organiser of large scale events with a huge international audience, we need to make a decision whether to move forward with the event at least 6 months before the event as it takes that much time to plan an event of our scale and calibre.

Guessing what was going to happen in 6 months during covid was impossible.”

A GLIMMER OF HOPE

Little did Blue know, the travel restrictions were just the beginning. The event industry was the first to be shut down. Not long after came the lockdowns.

Towards the end of 2020, a glimmer of hope appeared. For weeks, Thailand had zero domestic cases. Life slowly returned to normal as restrictions were lifted.

While borders remained closed, the event industry was allowed to reopen.

“Things were looking up by October so we announced White Party Bangkok 2021 for our domestic audience. We sold out all 1500 tickets for the event.”

However, White Party Bangkok 2021 was not to be. Just 10 days before the event, an outbreak occurred at a seafood market in Samut Sakorn.

Bangkok’s governor ordered the cancellation of all New Year celebrations, and Blue’s team suffered yet another massive blow.

By 2021, it seemed like live events were never making a comeback. Morale within the industry was at rock bottom.

“We kept paying our staff as long as we could.

When it became clear we actually didn’t know when we would be able to host events again, we had to stop. That was hard for us.

There was no income coming in and we did not receive any help from the government.”

With no end in sight, it was around this time that many event organisers left the industry. Despite his passion for events, Blue considered switching careers too.

“I was considering going back to the corporate world, but still within the entertainment industry.

There were some sectors of entertainment that were doing well during the pandemic, like streaming services. I was approached by head-hunters for some really exciting roles.

However, I was seeing someone in Canada at the time. If I went back to work full-time, that would mean I won’t be able to go see him as much as I wanted to.

I guess I chose love over work.”

“Being in a long distance relationship was already difficult, but covid makes things even more complicated. I think it hit him harder than it did me.

I was devastated because I really thought he was “the one”.

I got into a pretty deep depression where I didn’t feel like myself for months.”

LIGHT AT THE END OF THE TUNNEL

With his career in limbo and his relationship over, Blue had hit rock bottom. But a strong support network propped him back up again.

“I’m not the kind who would pour their heart out and talk to people when I’m feeling down, but I’m very lucky to have really amazing friends who got me through it. They helped me just by being there and let time do the rest.”

The pandemic may not be completely over, but it seems like the worst of the pandemic is finally behind us. With airports packed and people out and about, the event industry can finally start healing.

“Circuit Festival Asia is a promising young festival. We feel very good about the success we had this year after the 2-year hiatus.

We planned to bring back the Water Park Day Party in 2023 and make the Beach Party even bigger. The event will be held June 23rd-25th, 2023 in Pattaya which will coincide with a long weekend in China, Hong Kong & Taiwan.”

Fresh from the success of Circuit Festival Asia, Blue is in the midst of preparations for White Party Bangkok’s highly anticipated comeback.

“This will be the first White Party Bangkok in 3 years.

Even though some of our friends from China may not be able to join us yet, the ticket sales have been the strongest since we started the festival in 2015.”

Strong ticket sales is an understatement.

People all over the world are clearly raring to party.

Despite an unprecedented amount of hype, Blue remains unfazed from the pressure. In fact, he sounds more confident than ever.

“My good friend Rich Campbell, who is the owner of Atlantis Cruise, told me at Burning Man that to be a good event producer, you have to go and experience events other than your own.

I really believe that is true. I have been to major events all over the world, gay and straight, and I am constantly inspired by many of my peers’ work. However, one thing I can say with confidence is that we provide one of the most memorable experiences with the calibre of production we do at White Party Bangkok.

With almost 3 years worth of pent up inspiration, Blue is confident in producing the best edition of White Party Bangkok ever.

“We always try to push the envelope every year, using exciting new technology in our production to give our attendees an exciting new experience.”

“We are excited to welcome many new faces as well as returning veterans. The energy is going to be through the roof and we don’t want you to miss it.

The party renaissance is about to begin for Asia and we want you to be a part of it.”

Dear Straight People is proud to be the Official Media Partner of White Party Bangkok.