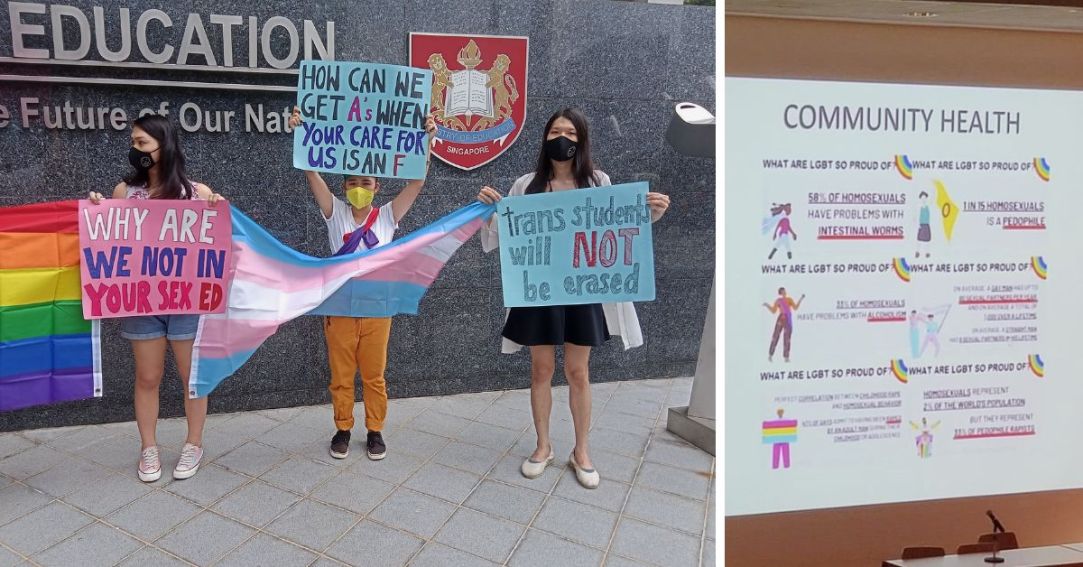 Unless Singapore updates its sex education system, incidents like the Hwa Chong Institute saga will continue to occur.

On Friday evening, I received a text from an outraged friend about slides that were delivered to secondary 4 students at Hwa Chong Institution as part of a talk by a school counsellor.

The slides made statements such as “58% of homosexuals have problems with intestinal worms” and “23% of children with lesbian parents have been sexually abused”. Not only were the statements discriminatory, they were so absurd I thought it must have been fake news.

But when photos of the slides went viral over the weekend, it became clear that the allegations against Hwa Chong Institution were true.

I couldn’t decide which was more worrying.

The fact that a school counselor could harbour such bigoted views. Or the fact that there are people out there so ignorant that they actually believe in what is clearly misinformation against the LGBT+ community.

In response to the controversy, Hwa Chong Institute has reprimanded and suspended the school counsellor from giving sex education lessons.

The Hwa Chong saga is just one of several incidents in recent years that highlights the shortcomings of Singapore’s sex education system.

As Pink Dot very rightly pointed out in their statement:

“To chalk this up to the actions of one rogue counsellor ignores systemic issues of inadequate sexuality education and the fact that schools in Singapore have repeatedly evaded accountability on matters of sexuality.”

In Singapore, the Ministry Of Education has made concerted efforts in recent years to strengthen the mental well-being of their students. Measures include the implementation of mental health lessons for all students from primary school level right up to pre-University.

The irony here however, is that Singapore’s censorship and anti-LGBT laws make it impossible for schools to be a safe space for queer youths. In short, you can’t care for the mental well-being of LGBT+ students without LGBT+ inclusive sex education.

Not A Safe Space For LGBT+ Youths

Over the years, prominent figures and community groups have raised concerns over the well-being of LGBT+ youths in schools.

In 2019, Nominated Member of Parliament Walter Theseira raised concerns over whether school staff receive adequate training to support students who are bullied over their sexuality and gender identity.

The Hwa Chong saga illustrates that not only is there inadequate training for educators with regards to sexuality and gender identity. School staff are free to perpetuate their own biases and spread misinformation to impressionable students.

In fact, a public survey by SG Mental Health Matters revealed that many students felt worse off after consultation with their school counsellor. This is further corroborated by Leow Yangfa, executive director of Oogachaga, which provides counselling services for the LGBT+ community. Mr Leow tells TODAY that he has encountered incidents where misinformation is taught to students that is based on religious sources rather than scientific research.

#FixSchoolsNotStudents – Birth Of A Protest

The inadequacies of Singapore’s sex education system is further exemplified by the birth of the #FixSchoolsNotStudents movement.

In 2021, a reddit thread from a disgruntled trans student alleged that MOE (Ministry Of Education) barred her from undergoing hormone therapy. Diagnosed with gender dysphoria at the Institute of Mental Health, the student was due to undergo hormone therapy as part of her treatment. But she was prevented from doing so by MOE.

Although MOE denied the allegations, MOE misgendered the student in their response. Despite the barrage of angry comments on their social media post, MOE refused to revise the pronoun.

That alone speaks volumes about MOE’s treatment of queer youths.

MOE’s handling of the matter led to the birth of #FixSchoolsNotStudents, a movement against the inadequacies of Singapore’s education system with regards to the LGBT+ community.

The #FixSchoolsNotStudents saga culminated in a protest by students outside MOE’s headquarters. Considering the fact that protests in Singapore are illegal without a valid permit, the student led protest was not just unprecedented. It was shocking!

When told by police that there are other avenues of feedback, the protesters objected, noting that concerns raised by public figures and community groups alike about discrimination and prejudice in schools over the years have produced little change.

The protest culminated with 3 of the protesters being arrested.

Singapore’s Schools Need To Do Better

The fact that a group of students were disgruntled enough to stage a protest outside MOE despite the legal repercussions speaks volumes about the shortcomings of Singapore’s schools.

Unless a major rehaul of Singapore’s sex education system is done, incidents like the Hwa Chong saga will continue to occur.

One need only look at what Taiwan is doing to get an idea of what world class sex education should look like.

Educators in Taiwan are given proper training and guidelines with regards to sex education. Contrast that with Singapore, where we have a school counsellor in one of Singapore’s top schools, who is so ignorant that he actually believed in what is clearly fabricated statistics against the LGBT+ community.

Most importantly, schools in Taiwan strive to be a safe space for all students, LGBT+ youths included.

Singapore’s sex education system has failed our queer youths long enough. Unless something is done, incidents like the Hwa Chong saga will continue to occur.