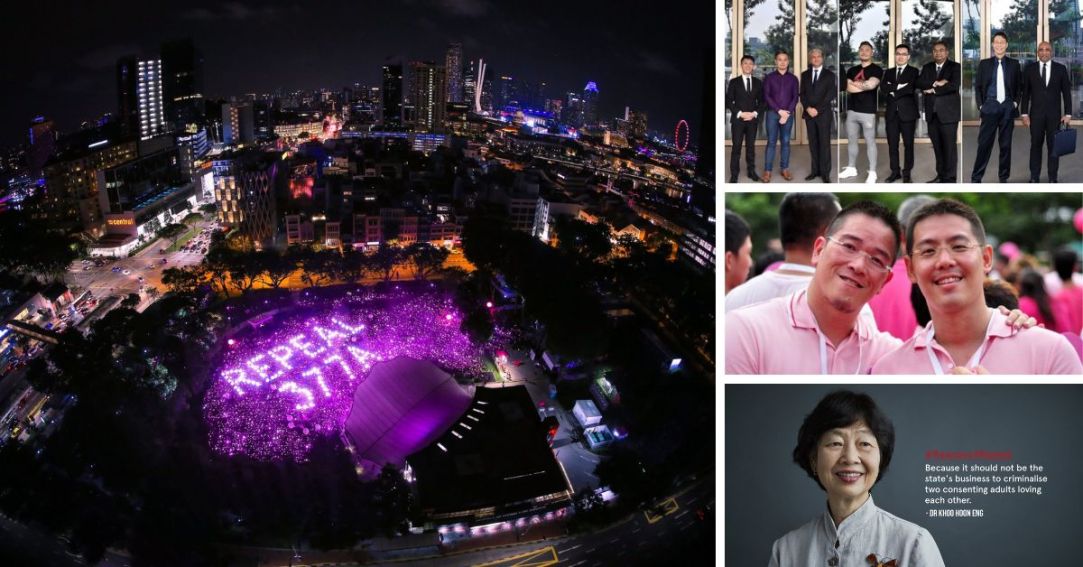 Repeal S377A: A Timeline Of The Long Road To Repeal

From legal challenges to photo shoots, read about the long and arduous journey it took to repeal Section 377A in Singapore.

Singapore has finally repealed Section 377A!

After years of failed attempts, many in the LGBT+ community have started to give up hope at ever seeing the repeal of Section 377A; the archaic law that criminalises consensual sex between men.

But on 21 August 2022, the Singapore government has finally done what it should have done years ago; abolish a law that propagates stigma and prejudice against the LGBTQ+ community by legally framing same-sex attraction as immoral and criminal.

The road to repeal has been a long and arduous one. In a bid to pay tribute to those who fought tirelessly for this historic day to come, here is a timeline of some key events that led to the repeal of Section 377A.

Section 377A of the Penal Code of Singapore was a law implemented under British colonial law that specifically criminalises consensual sex between adult men. It was part of Section 377, which criminalises sex deemed to be ‘against the nature of nature’.

The earliest documented case of prosecution under Section 377A reportedly happened in September 1938, when Lim Eng Kooi and Lim Eng Kok were imprisoned for 7 months each.

According to a blogpost by pioneering gay activist Alex Au on his popular website Yawning Bread, there were reportedly 185 convictions under Section 377A between 1997 to 2006.

SECTION 377A: BIRTH OF THE REPEAL MOVEMENT

The movement to repeal Section 377A can be traced back to the Annis Abdullah case, a police sergeant who was imprisoned for 2 years for having consensual oral sex with a 16-year old teenage girl.

Seeing as the girl was of legal age and the act was consensual, his case sparked a public outcry as many were shocked that consensual oral sex was a criminal offence in Singapore.

The public outcry prompted the Ministry Of Home Affairs to review the Penal Code. After a year, many laws under Section 377 of the Penal Code of Singapore were removed, but Section 377A remained.

The retention of Section 377A sparked an outcry within the LGBT+ community, birthing the repeal movement.

LEGAL CHALLENGES TO REPEAL SECTION 377A

The first person to file a constitional challenge against Section 377A was massage therapist Ivan Tan Eng Hong.

In September 2010, lawyer M. Ravi filed a legal challenge to Section 377A in the High Court on behalf of his client Tan Eng Hong, who was charged for having consensual oral sex with another man in a public toilet.

Tan’s case was initially dismissed by the High Court, due to “a lack of a real controversy”.

The landmark ruling came in 2012 in Singapore’s Court of Appeal, who overturned the High Court’s verdict, thereby allowing Tan his day in court.

In 2013, Tan’s case was combined with Lim Meng Suang and another v. Attorney-General (see below).

Gary Lim Meng Suan and Kenneth Chee Mun-leon, a gay couple who have been together for 15 years, filed a constitutional challenge to Section 377A.

Justice Quentin Loh ruled against their challenge on 9 April 2013, but the couple filed an appeal on 30 April 2013.

But on 29 October 2014, the Court of Appeal rejected Lim and Kenneth’s challenge to repeal Section 377A,

When India decriminalised sex between people of the same sex, it ignited hope of the same in Singapore. Notably, esteemed diplomat Professor Tommy Koh voiced his encouragement for a constitutional challenge against Section 377A.

This prompted three separate challenges against Section 377A:

On 30 March 2020, Justice See Kee Oon combined the three challenges into a single case, and ruled against them.

NON-LEGAL MOVEMENTS TO REPEAL SECTION 377A

Founded in 2009, Pink Dot is an annual movement that is organised in support of the LGBT+ community in Singapore.

The repeal of Section 377A has consistently been a key focus of Pink Dot. Notably, Pink Dot 2019’s edition featured the message ‘REPEAL 377A’.

Spearheaded by theatre director Glen Goei and Johannes Hadi, Ready4Repeal is an online movement that organised a petition for the repeal of Section 377A.

The petition collected over 50,000 signatories, including notable figures such as Professor Tommy Koh.

In November 2018, Dear Straight People organised a photoshoot #Reasons4Repeal, calling for the repeal of Section 377A.

Photographed by Audi Khalid, the photoshoot featured over 70 participants from all walks of life, including public figures such as actor Julian Hee and Paralympic medalist Theresa Goh.

The resulting photo album garnered over 1,000 shares on Facebook alone. You can view the photos here.

THANK YOU TO EVERYONE WHO FOUGHT THE HARD FIGHT

Here’s a big thank you to everyone who fought to repeal Section 377A!

The road to repeal was a long and complicated one. This article is not meant to be a comprehensive timeline of every single event that contributed to the abolishment of Section 377A.

This article is meant to merely illustrate just how long it took for Singapore to reach this historic movement, and also pay tribute to those who paved the way.

Here are some additional readings to illustrate the complicated journey it took to repeal Section 377A: