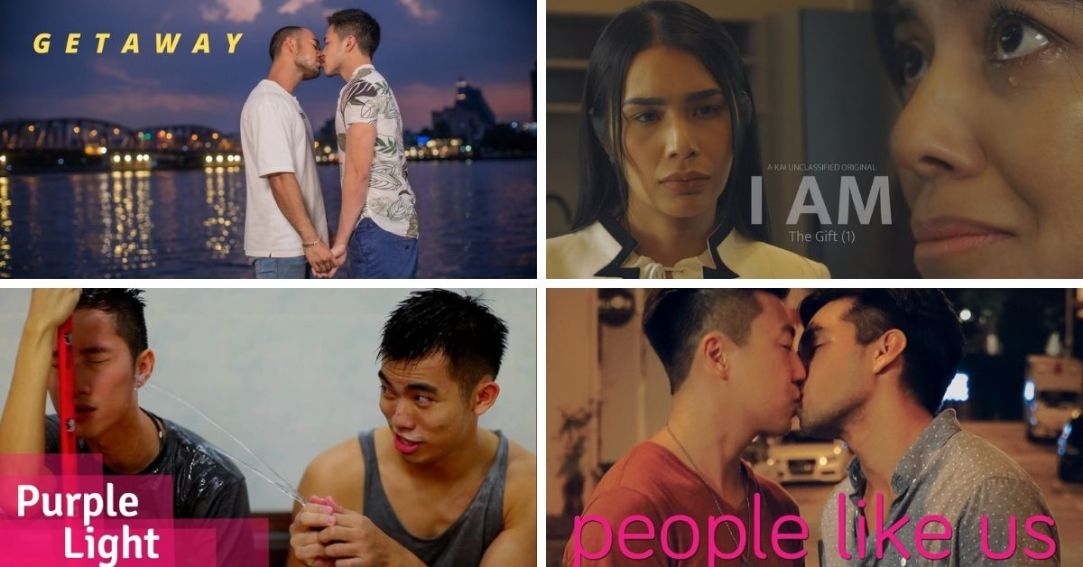 From short films to web series, here is the complete guide to every Singapore LGBT+ short film and web series that is available to watch for free on YouTube!

Despite Singapore’s strict media censorship laws and unsupportive environment, a handful of filmmakers have managed to overcome insurmountable challenges to produce a broad range of LGBT+ content, oftentimes burning a hole in their wallet to do so.

From short films to web series, here is the complete guide to every Singapore LGBT+ short film and web series that is available to watch for free on YouTube!

Note: We will continue updating this list as Singapore produces more shorts films and web series. Let us know if we missed any!

OVERVIEW: Published in 2014 on media giant Viddsee, ‘Purple Light’ was one of Singapore’s first LGBT+ short films published on YouTube.

PLOT: Through Zipeng’s eyes, Purple Light strives to tell a story about how one’s existence is bigger than their sexuality, and that no form of love should bear a label. Purple light is inspired by a true account.

OVERVIEW: Produced in 2013 by filmmaker Leon Cheo as a school assignment, ‘Swing’ was a hit in the film festival circuit scene, scooping up a host of awards, eventually getting licensced to streaming platform Viddsee.

PLOT: A few weeks after Wei Long and Daniel have broken up, Daniel asks Wei Long to meet him once more.

OVERVIEW: Published in 2014 on Viddsee, Sisters 《姐妹》garnered over half a million views, making it Viddsee’s most popular LGBT short film to date.

PLOT: Things take on an unexpected turn for a groom when a cheeky relative at the wedding volunteers to take on the role of a bridesmaid.

OVERVIEW: Produced by Zhi Kai on his YouTube channel ‘Kai Unclassified’, I AM (Part 1) is the first of a three part short film series that seeks to explore different parts of the LGBT+ community.

You can read about the inspiration behind this short film here.

PLOT: Two young men Shawn (Edwin Fong) and Darren (Kenny Seethoo) are serving National Service. In a casual interaction in camp, the two of them discover that they may be yearning more out of their friendship.

5. I AM (Part 2): Short Film On Discreet LGBT+ Relationship

PLOT: When Joie (Elijah Tay) picks Diana (Andrea Razali), a teacher in a Singapore school, up from her workplace, the kind gesture is not well-received by Diana when probing from her colleagues sparks an argument fuelled by years of tolerance in a discreet relationship.

PLOT: A recent discovery about 15-year-old Isaac’s behaviour leads the mother, Julie (Kavita Kaur), to decide on consulting a psychiatrist. An argument erupts with her husband David (Benedict Lin) who disagrees with her decision as he insists that his son is merely going through a phase that will pass.

7. I AM: The Gift: Two-Part Concluding Short Film

PLOT: Shawn (Edwin Fong) has not gotten over Darren (Kenny Seethoo) even after completing his National Service. Diana (Andrea Razali) gets caught in between David (Benedict Lin) and Julie (Kavita Kaur), who continue to disagree on how they should handle their child’s Gender Dysphoria.

OVERVIEW: Written and directed by professional filmmaker Jet Ho, Aqua Man was a labour of love that took Jet one month to conceptualise, script, cast and film.

You can read about Jet Ho’s filmmaking journey here.

PLOT: Set in the 2000s, Aqua Man talks about the emotional transformation of a young boy, Junjie, and its religious dilemma of being a gay Christian individual in Singapore.

9. Hurt: Short-Film On Cheating In The Gay Scene

OVERVIEW: Written and directed by Kieran Chieng, ‘Hurt’ made waves when it premiered back in 2016, garnering almost half a million views.

You can read about Kieran’s filmmaking journey here.

PLOT: After receving his test results, Chris deliberates his confession to Jonathan about an unforgivable mistake. He desperately wants to be comforted by his soul mate, but is at huge risk of losing him.

OVERVIEW: A joint collaboration between fashion house The Authority, Telescope Productions and director Martin Hong, ‘Summerdaze’ is a short-film about young love set in the BL genre.

Although the 3 minute long short film did not have any dialogue, it managed to strike a chord with audiences, garnering over 600,000 views on YouTube.

You can read our interview with the producer here and director Martin here.

PLOT: Two best friends embark on a journey of discovery through Jeju Island in search of themselves and ultimately love.

OVERVIEW: Written and co-directed by Benjamin Zhang, The Cycle was produced in 2020 and published on Benjamin’s own YouTube channel.

PLOT: The Cycle follows the homecoming journey of a gay Singaporean man, who desires his father’s acceptance of his husband, their soon-to-be born son and ultimately, himself. The man reconnects with his childhood through a game of Chinese chess with his father, and satisfies a childhood desire to learn how to cycle from him. Through this journey, the man comes to a revelation about fatherhood and the cycle of life.

OVERVIEW: Produced by Gayhealth.sg, People Like Us made history as Singapore’s first gay web drama series.

You can read our spoiler-free review here.

PLOT: People Like Us follows the lives of four gay men, Joel, Ridzwan, Rai, and Isaac as they navigate lust, love, and life.

Based on an original story from a gay creator, ‘Getaway’ sets itself apart from other BL dramas by boasting an openly gay director alongside an openly queer cast from Singapore and Thailand.

Comprising 5 episodes, ‘Getaway’ earned numerous media features, a barrage of positive comments and over 1.5 million views (and counting). Getaway also scooped up a slew of awards at the World Film Carnival, including Best Series.

PLOT: After his coming out goes horribly wrong, Singaporean Sam jets off to Bangkok to search for his exiled gay uncle, where he stumbles upon Top, a hopeless Thai romantic unlucky in love.

As any of the filmmakers above would attest to, it’s hard to be an LGBT+ filmmaker in Singapore.

So do give the above productions a stream or two to show your support for Singapore’s queer filmmakers.